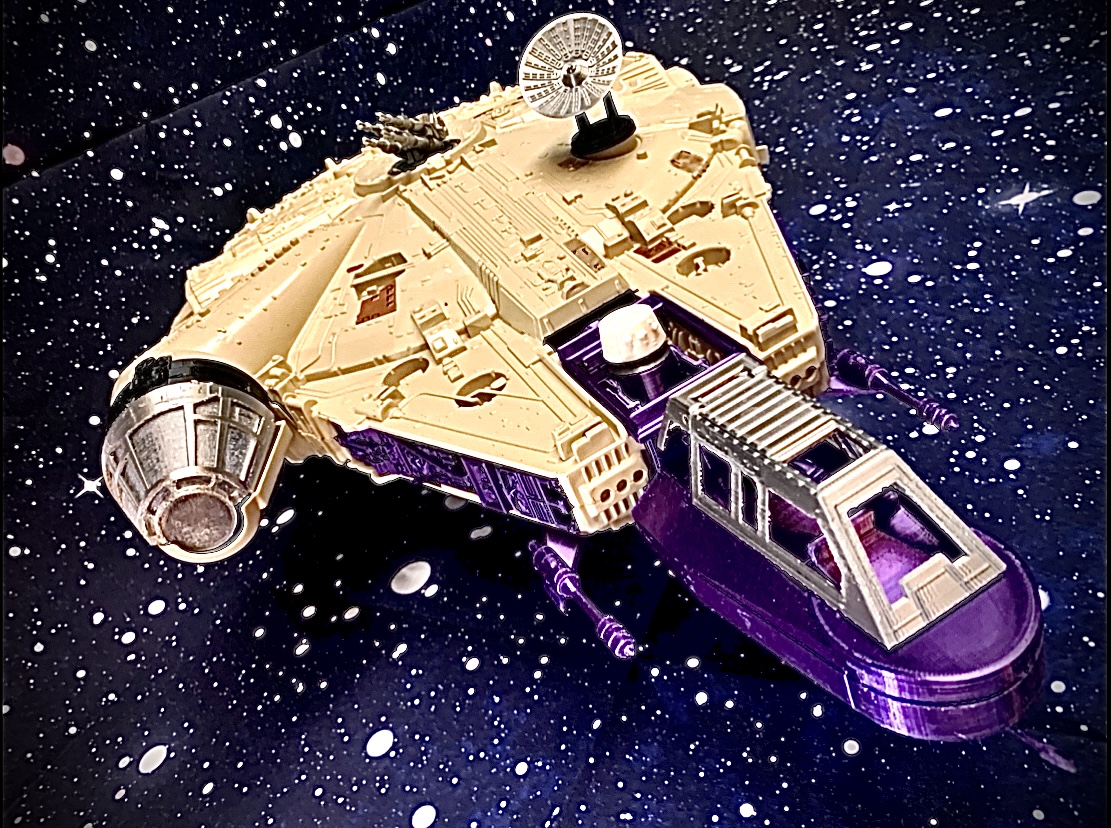 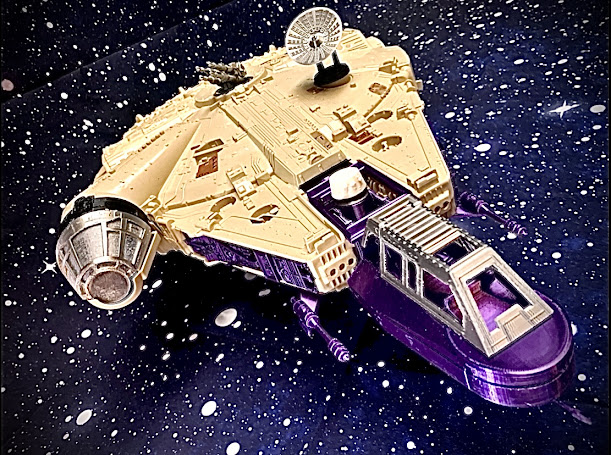 After the release of the first Star Wars film in 1977, instant fans of the film were hungry for more tales from that far away galaxy, and waiting patiently for several years to see the sequel wasn't in the cards.

The imaginative playground that George Lucas created left a fertile ground for further storytelling by energized fans of the franchise. The un-official expanded universe of new Star Wars adventures began to coalesce through fanzines and Sci-Fi magazines of the era. In addition to featuring inventive new tales, publications began to feature some of the earliest examples of Star Wars customized toys ever produced.

What was once a burgeoning new branch of the hobby, customizing has grown into an expansive artistic impression of our own imaginations. Over the past decades, examples of customized art/designer figures and toys have ranged in quality and appreciation, at times even soaring to the levels of high art and appreciated folk art (e.g. Kaws, Be@rbrick, Suckadelic, and Bill Cable among many others).

For many modern day toy customizers and artists, the original joy of customizing still reflects a drive to continue the expanded storytelling of the Star Wars galaxy. Much as toymakers of today, many customizers are beginning to transition their creative process away from the more traditional craft of sketching and hand sculpting to the more technical world of computer designing and 3D printing.

As a fan of the iconic Kenner line of Star Wars action figures and toys, I have come to appreciate the fine details and lines of the playsets and vehicles that were produced during the original releases of the films and the toymakers who created them. Having covered New York Toy Fair over the past several years, I've had the opportunity to speak to Mark Boudreaux, who created many toys at Kenner and Hasbro for over 40 years and has impressively only recently retired. Mark created the 1977 release of the Millennium Falcon and in fact every iteration of the Falcon produced until his retirement in 2020. At the time of our meeting in 2018, Mark was promoting the yet to be funded Jabba's Sail Barge. Describing the cockpit, Mark showed the zeal of any fan. He was particularly proud that the cockpit had been approved by Lucasfilm, since that part of the ship was never seen in the films and was his original design.

The sleek, grey primed Sail Barge prototype displayed at Toy Fair was entirely 3D printed -- a tremendous feat at its gargantuan size of over four feet in length and much in contrast to the rudimentary kit-bashed prototypes Mark produced for the vintage ships in the 1970s.

3D printing was created with the intent to simplify the creative process of producing prototype hardcopies. This new process avoided the need for manual sculpting and the subsequent process of creating silicone molds in order to produce hardcopies of the original toy sculpt. With 3D printing, examples of the original design can instead be printed as needed in any quantity. It is for this reason that the original term for 3D printing was termed "rapid prototyping." Nearly all toys produced today are designed using this process. 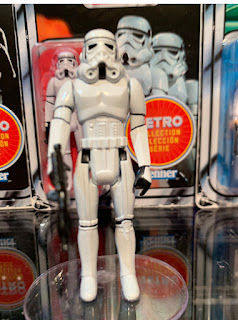 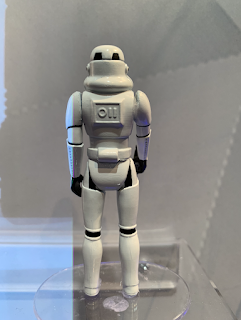 3D printed hardcopy of the retro Kenner Stormtrooper introduced at New York Toy Fair February 2019.
Notice on close inspection the 3D printing lines on the back of the figure.

3D printing is now readily available for customizers to use and express their ideas. Public websites such as Thingiverse.com allow amateur toymakers and artists to share their creations with other people for printing and further customization.

Having recently re-watched American Grafitti and admiring the classic American hotrods that pepper Lucas' early film, I started to consider what a hotrod might look like in Lucas' later space adventures. Maybe a Corellian cruiser suped-up by some Rodian teenage delinquent. And with that inspiration, I set up my Ender-3 3D printer.

Stripped vintage Kenner ships and playsets are plentiful and serve as an ideal foundation for customization. Often the bane of vintage toy dealers, these large plastic hulls carry little value to most collectors and are difficult to sell. Typically brutally cannabilized for parts by Jawa-like collectors in search of a missing piece, they sit piled up by the dozens in Rubbermaid tubs often left in storage. 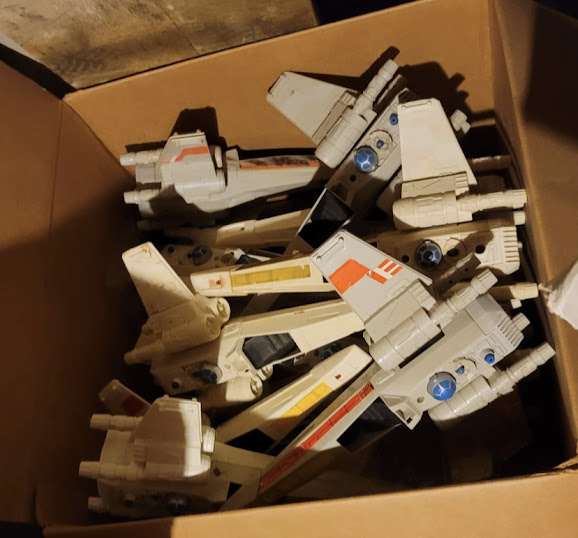 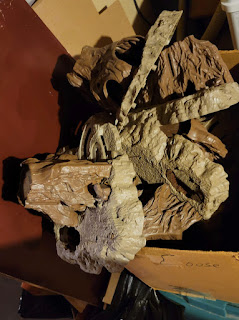 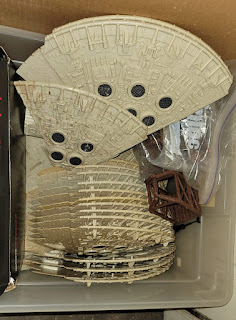 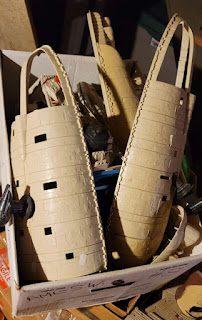 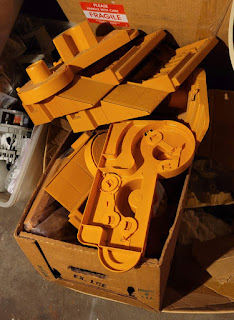 I started my custom with an incomplete vintage Kenner Millennium Falcon that my children used years ago in weekend-long epic battles. Wanting to begin with an empty palette, I removed all remaining parts and set them aside for other collectors who may be in need of the parts. I then separated and cleaned the empty hull with care to protect any remaining stickers and reassembled the ship. 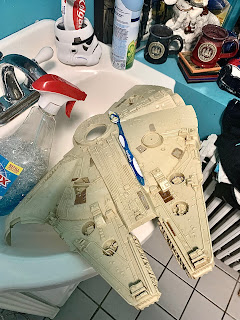 For the customized exterior parts, I chose a metallic purple with additional silver and black elements. I also incorporated a modified version of the unproduced 1986 Kenner shuttle concept piloted by a matching purple Astromech.

Interiorly I chose a more movie accurate color scheme of silver and black with added details to the chess table and floor panel. Most of the parts printed were modified designs I found on Thingiverse.com. 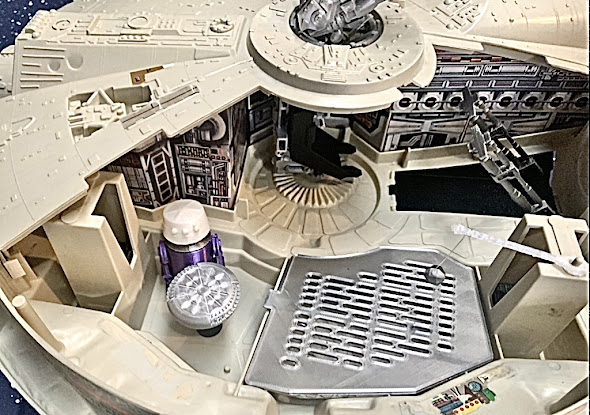 For the interior design I chose a metallic silver and black color combination for more movie authentic character. De-emphasizing the silver arm for the training remote by printing it in a clear plastic was done with the same intent. The chess table-top design is 3D printed as well. 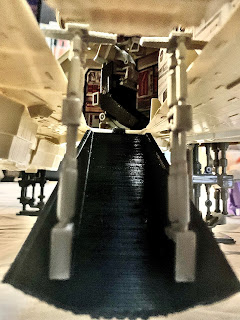 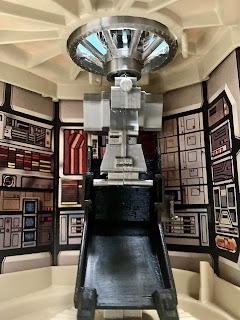 Much like any other custom, care should be taken not to produce any part that could be confused even by a novice collector for an authentic vintage piece. Fortunately, due to the nature of the additive process of 3D printing which is dramatically different from heat extrusion, customized parts are usually easily discernable. Greater care should be taken if printing in vintage-like colors. 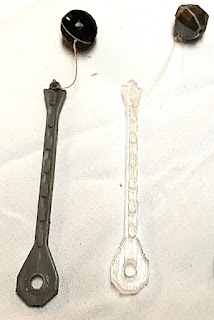 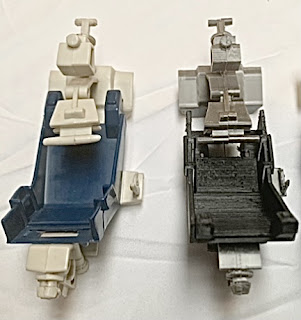 Comparison pictures from original Kenner parts to the 3D printed models show several design techniques. With the use of multiple colors, the purple pinstripe detailing was given a black background to give the appearance of grease and space debris embedded in the machinery. The ramp picture demonstrates a Kenner original ramp followed by a 3D printed black model and then followed by a ramp 3D printed in Kenner like color. 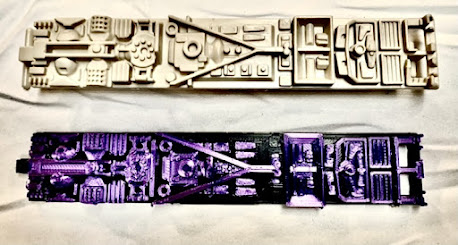 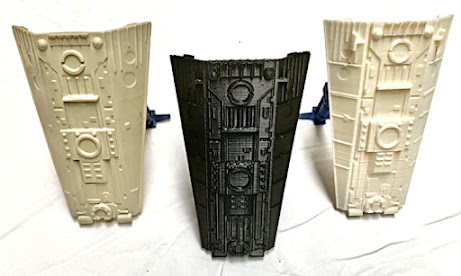 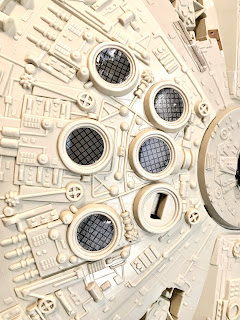 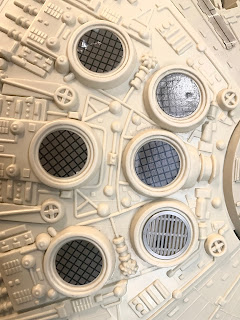 Complex prints can be achieved with experimentation. 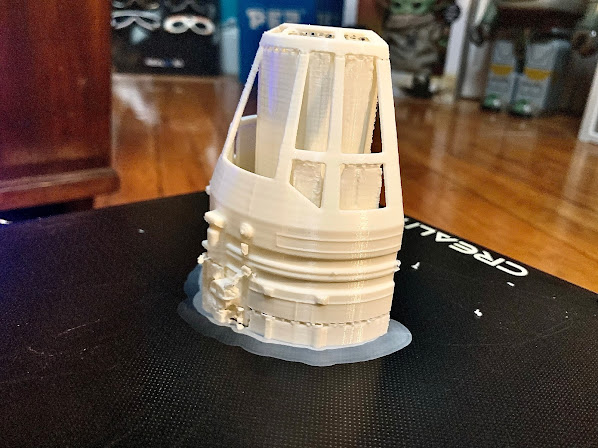 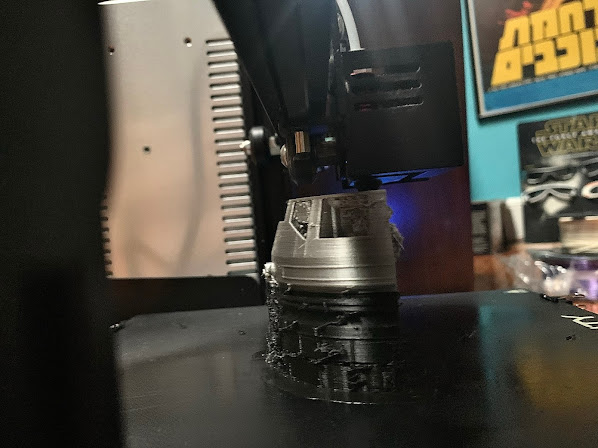 If you are interested in finding a stripped vintage hull for customizing, the dealers listed below can likely assist you. Please empty their basements.
Posted by Stephen Danley at 7:00 AM No comments: