From a rousing collector discussion over dinner in Seattle, here are a few of the creepiest Star Wars collectibles that we could come up with just in time for Halloween.

Before we dig in too far, feel free to set the mood with some Star Wars music on pipe organ. 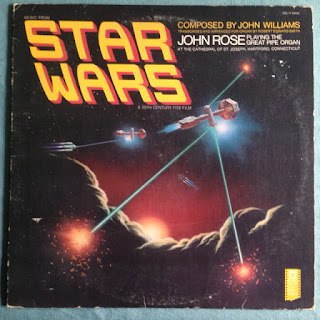 Our first item is practically a given in that everyone brought it up at least once or assumed it was already mentioned. It's the Jar Jar tongue candy with 'push to eject tongue' action. 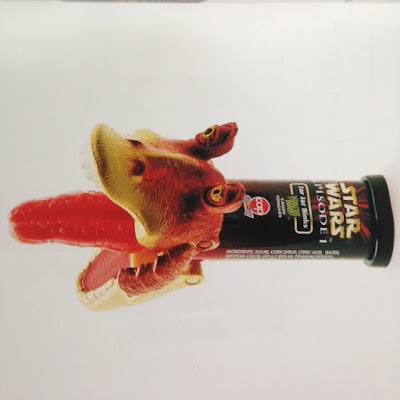 As many collectors put Gungans in the same category as Ewoks, here we have the "Ewok Celebration" record single. It appears these 'Ewok' creatures are on to you, better run! 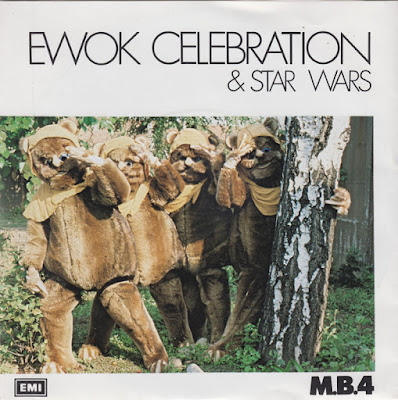 What kid wouldn't want to be one of their favorite characters for Halloween? Though they had the best intentions, these patterns may make the average person think twice before opening their door to trick-or-treaters. 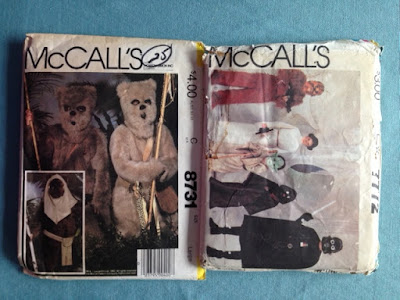 While Jar Jar dispenses candy, 3PO dispenses tape with this Sigma tape dispenser. It's that bizarre combination between dispenser and chair that doesn't quite translate. 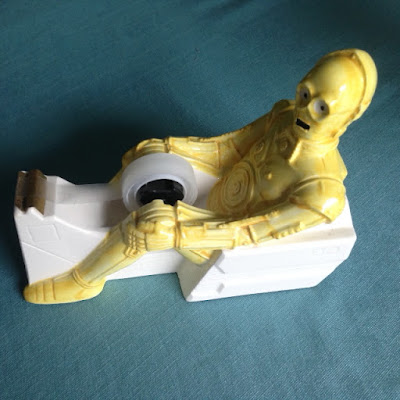 'That's no Moon'...and with those pink lidded eyes it isn't really Obi-Wan either. But in 1993 it was just about all we had for Star Wars action figures. 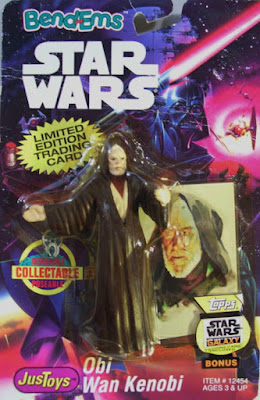 'Monkey faced' Leia was discussed mainly because of being proportionally disturbing and facially unrecognizable (though I always called her 'chicken legged' Leia). 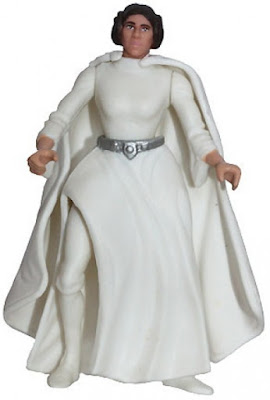 Who's that glaring at your collection and following you around the room with his glassy stare? Why it's Salacious B. Crumb of course! This clock sold at Celebration in 2015 was a hit with collectors like myself who cherish bizarre Star Wars items. 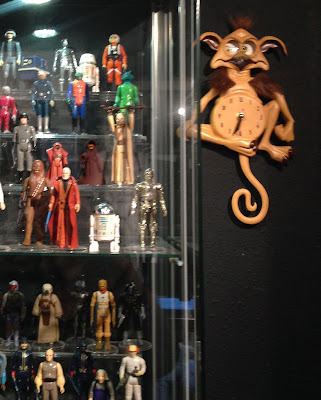 From the Star Wars Friends Of the Force coloring book we have this gem of a page. As to the positioning of the figures well, as Gus Lopez puts it "they didn't really think about it, or maybe they thought about it too much." 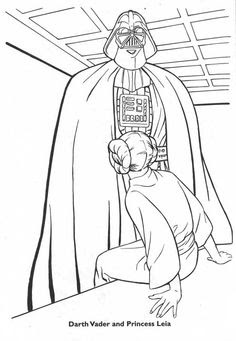 There are numerous bootleg ceramics that could make the list. And they were brought up several times in conversation so we'll just leave you with Ron Salvatore's article on unlicensed ceramics so you can peruse further on your own. 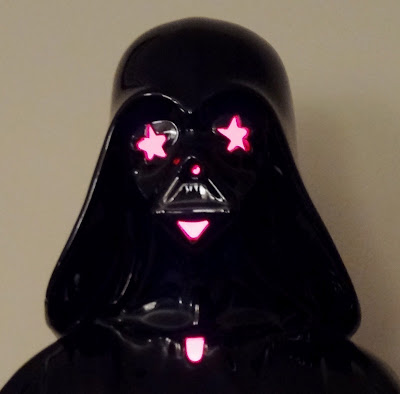 Posted by Amy Sjoberg at 9:00 AM No comments:

It is sort of a Halloweenish episode of the 'Chive Cast! Skye spookily lies consistently to Steve about publishing the haunted and long missing Luke Hoth episode while showing off the weirdest and creepiest Star Wars vintage item that has NEVER been seen before. Phidias and CJ talk about the "Big Pick" (the recent warehouse find of Vintage Star Wars stuff)... and, hold on my creepies... you will hear chilling voice recordings from the psycho killer MONSTER that has been terrorizing the Vintage Star Wars community. It is neither a traditional episode, nor is it Gargan Largan... it's just the 'Chive Cast space freaks, so enjoy!

Posted by Stephen Danley at 12:49 PM No comments:

Posted by Tommy Garvey at 7:00 AM No comments: 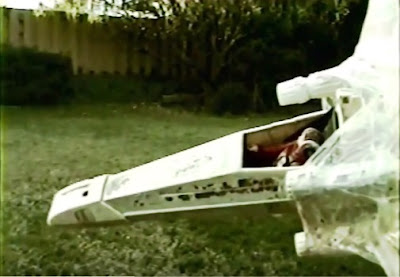 Star Wars toys have long played a key role in recreating that galaxy far, far away in kids' home movies. J.C. Reifenberg's short film Summer '78 which debuted at Star Wars Celebration Anaheim and was recently made available online nostalgically dramatizes a familiar activity from my youth in the 1990s. I spent many a summer afternoon with my mom's JVC camcorder reenacting Star Wars battles with a variety of vintage Kenner and modern POTF2 figures (with Micro Collection and Galoob Micro Machines mixed in to depict a range of scale). Many of those tapes are unfortunately unaccounted for at the moment, but the "project" that served as their genesis has survived -- that being a short film my family made in 1993 entitled The Rebel's Revenge.

My mom had just started her own videography service with the company name of "Cinema 2 Productions" (which stemmed from her tendency to find herself editing projects at 2am), and her new editing system featured tools for creating titles with a starry background, dissolves, and some cheesy sound effects. She had also just purchased the deluxe complete compact disc set of the Star Wars Trilogy original soundtracks. What more could you need to make a Star Wars movie?

Well, there had to be some form of story. With Star Wars, simplicity was intrinsic. Our "opening crawl" reads:


The princess Leia and
Cindel have been
captured by the evil
Lord Vader and his
men. Their only hope
is to be rescued by the
Ewoks.

In this case, it was dictated by the props, costumes, and actors available -- and clearly influenced by the awful live action Ewok films that were constantly airing on the Disney Channel at the time. It's the crossover that every Star Wars fan has always dreamed of. 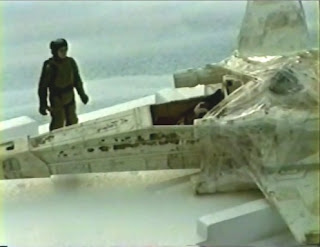 Any Star Wars movie has to begin with a spaceship of some kind. This is where some vintage Kenner toys took the spotlight for a first act that in retrospect really has nothing to do with the rest of the movie, but...spaceships, rebels, right? The "battle damaged" X-Wing in the opening shot piloted by a B-Wing Pilot exists in essentially the same state on display in my collection. Sadly, the convertible Snowspeeder flown by the Rebel Commando disappeared many years ago. The expository dialogue spoken by my 8 year old self regarding the imminent Imperial attack is supplemented by my childhood friend who wanted to be sure that Darth Vader (whom he played) was a force to be reckoned with, and he was right! 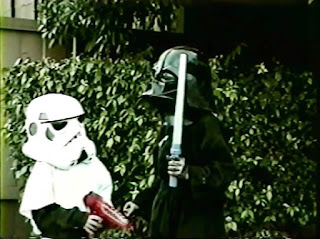 From here, the rest of the story is portrayed by real actors amidst real sets with practical effects (my favorite being our heroes' getaway aboard the family Ford Aerostar, which in our minds roughly resembled the cockpit of an Imperial Shuttle and the Starspeeder 3000 from Star Tours). We pushed the envelope in terms of taking storytelling risks by arming Vader with a blaster and staging the most epic firefight wherein one Ewok staves off a laser barrage in an open battlefield at point blank range over the course of two days (we began shooting one evening and picked up where we left off the next morning). If nothing else, this may serve as the pinnacle of Stormrooper marksmanship -- or lack thereof. 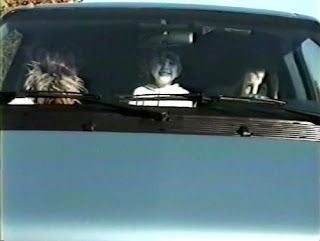 A sequel was in the works soon thereafter. We added Yoda and C-3PO masks to the prop department, and I distinctly remember typing out a "script" on our newly acquired Macintosh computer, but it was never meant to be. Though we went on to make many more movies in other genres, action figures replaced human actors entirely in the Star Wars movies I made in the years that followed. Perhaps much like George Lucas, I became too attached to my "toys" and impatient with my (sibling) actors. Or perhaps I just never wanted to reprise my role as the chubby blanket-wearing Ewok named "Swinga."
Posted by Stephen Danley at 10:10 PM No comments: 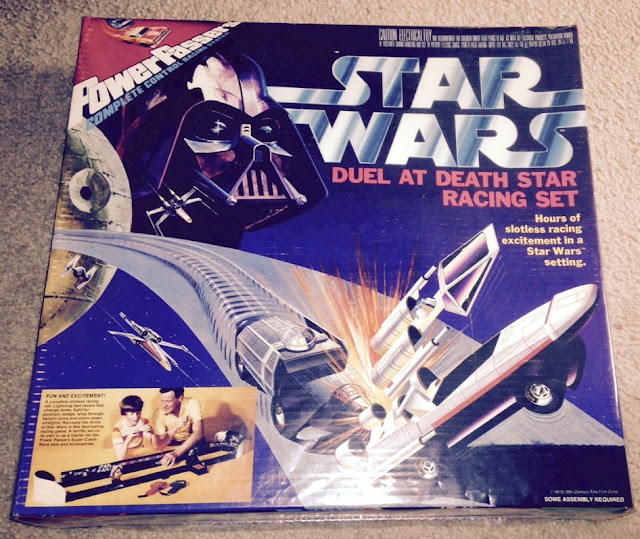 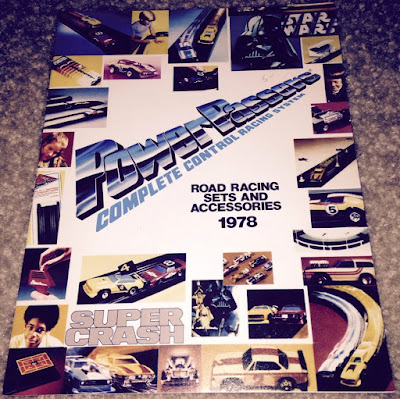 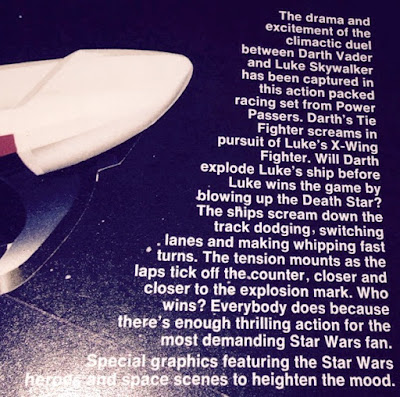 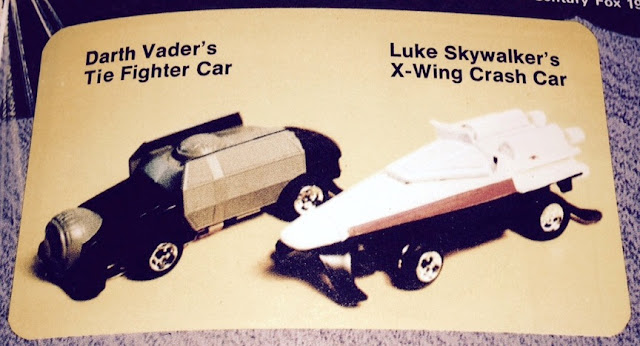 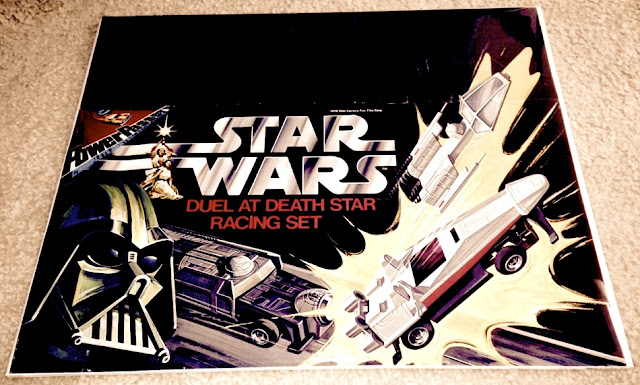 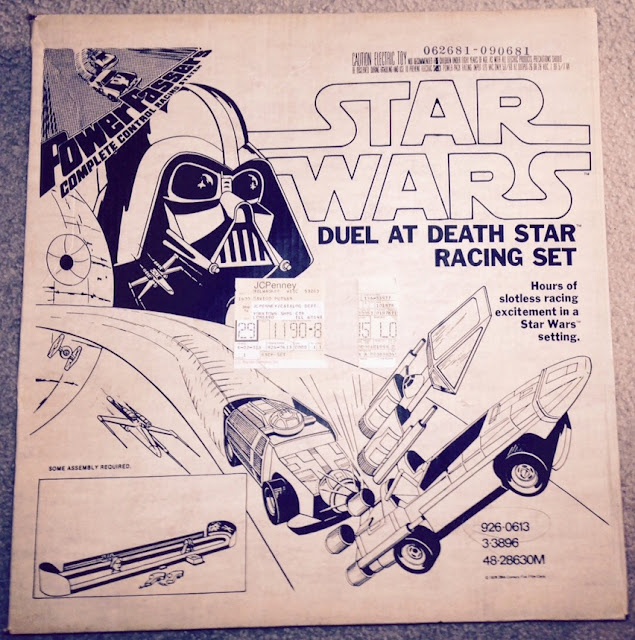 Our next Star Wars Celebration Anaheim Collecting Track Panel looks at Star Wars Comic Art. This year marks the triumphant return of Star Wars to Marvel Comics. First published in 1977 as a way to promote the film, Star Wars comics have been published almost continuously since, unitizing the skills of some of the best names in the comic industry. From Howard Chaykin to Al Williamson, from Travis Charest to Adam Hughes, every Star Wars comic starts with pen and ink on a piece of illustration board and these original drawings have become increasingly collectible.

The panel is presented by comic art collector and Curb Your Enthusiasm writer/director David Mandel with special guests Kelvin Mao and Jonathan Rinzler.

Posted by Tommy Garvey at 9:00 AM No comments: