At some point every collector of vintage Star Wars action figures wonders why it took Kenner four years to release a TIE Fighter Pilot. The TIE Fighter was one of the first action figure vehicles released in 1978, but there was no figure capable of piloting the thing until 1982. What gives?

The best explanation I can come up with is that Kenner didn't view anonymous pilot figures as appealing until Hasbro began releasing one in conjunction with each of the vehicles produced in their G.I. Joe line. That would explain why the TIE Pilot and Cloud Car Pilot didn't hit store shelves until right before the release of The Return of the Jedi, even though their rides had been available since 1978 and 1980 respectively.

Unfortunately, it doesn't explain why the Cloud Car Pilot looks like your mildly alcoholic neighbor Randy cosplaying as a crossing guard from the future using nothing but common household implements.


You: Randy? What's with the helmet? Wait...is that a popcorn bowl?

Randy: It was three Löwenbräus ago.

You: Does Cynthia know about this?

Randy: Only if my lawyer says something to her lawyer. Care to say a few words into my hand-held communicator? You can use it to talk to the future.

You: That's a package of cigarettes duct-taped to the top of a toilet paper roll.

Randy: No stalling in the crosswalk, sir.

Of course, true nerdlingers know that the pre-1982 Kenner did make a figure that looked quite a bit like a TIE Fighter Pilot. They did this in 1977, before the first wave of action figures was even available to consumers. The figure was featured in early photographs distributed to sub-licensees.

Here's the twist: In the photographs the figure is referred to as the Death Squad Commander.

Whoa! Did I just get all M. Night Shyamalan on your ass or what?

Okay, as a revelation maybe it isn't as earth shattering as the Village being a place where inbred people pretend they're pilgrims. But it's pretty good, right?

The item in question is actually a mock-up. The folks at Kenner created it by modifying a figure drawn from Fisher Price's Adventure People line. That explains the odd positioning of the arms. It also explains why this villain from a galaxy far, far away is wearing bell bottoms. 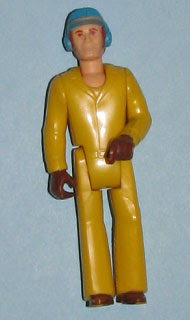 The Fisher Price thing isn't as weird as it sounds. Prior to the release of Kenner's Star Wars line,  the Adventure People were among the few action figures made in a 3.75-inch scale. Therefore, they were ideal fodder for Kenner's model shop when it set about creating the earliest Star Wars prototypes.

When looking at the above photo showing the 12 figures released in 1978, you may have noticed that all but the Death Squad Commander, Tusken Raider, and Jawa look more or less like the versions eventually sold in stores. This wasn't always the case. 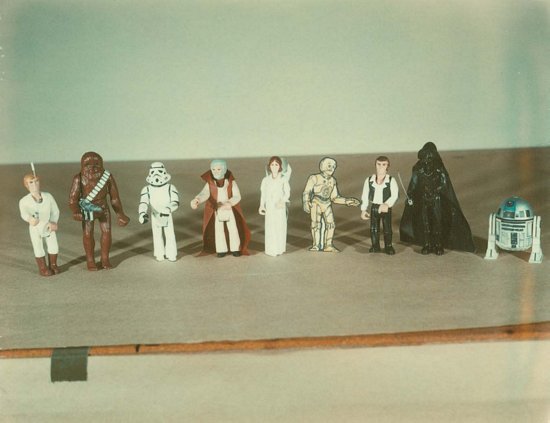 A still earlier photo, dated May 10, 1977,  reveals that, just like the DSC, the bulk of Kenner's early figure prototypes were based on Adventure People.

It also reveals that, originally, only nine figures were conceptualized in three-dimensional form. 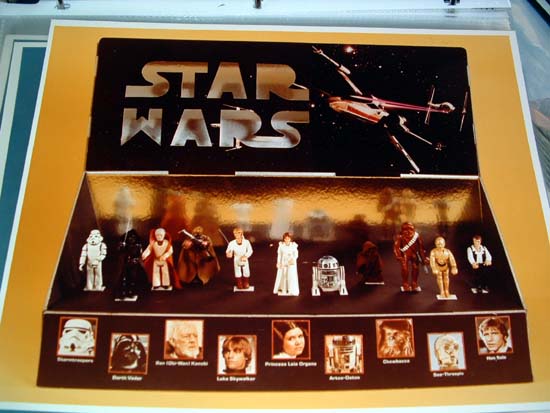 Even the cardboard display featured in early photographs boasts images of only nine characters.

However, if you look at the figures featured on the display, you'll see mock-ups of the Tusken Raider and the Jawa. This likely indicates that these two pieces postdate the creation of the display itself.

Still, there's no Death Squad Commander. Either he hadn't been created yet or he didn't show for the photo because his bell bottoms were still at the dry cleaners.

From these photos I think we can infer three things: 1) Nine figures were originally conceptualized, 2) Jawa and Tusken Raider were added somewhat later, and 3) Death Squad Commander was added last.

I can hear you thinking: "That's weird, I thought the Dozen Original Figures were predetermined and immutable, like the Ten Commandments, the Holy Trinity, or something equally quasi-blasphemous."

In fact, this chronology jibes with much of what we know concerning the creation, marketing, and release of the first 12 Star Wars action figures. 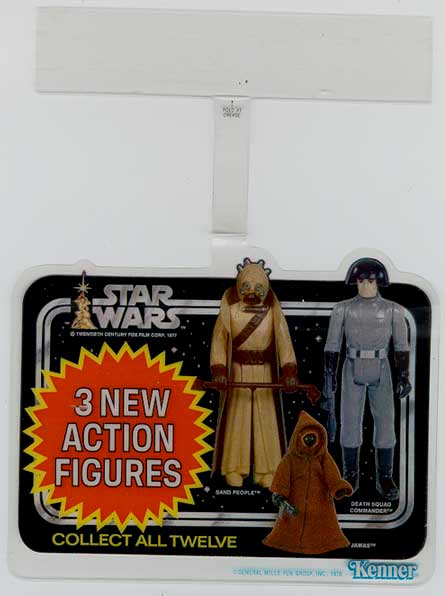 As this store display shows, the Jawa, Tusken Raider, and DSC were the last of the first 12 figures released to stores. If you're old enough to remember looking for Star Wars figures at your local department store, you may recall waiting for the appearance of this motley trio. 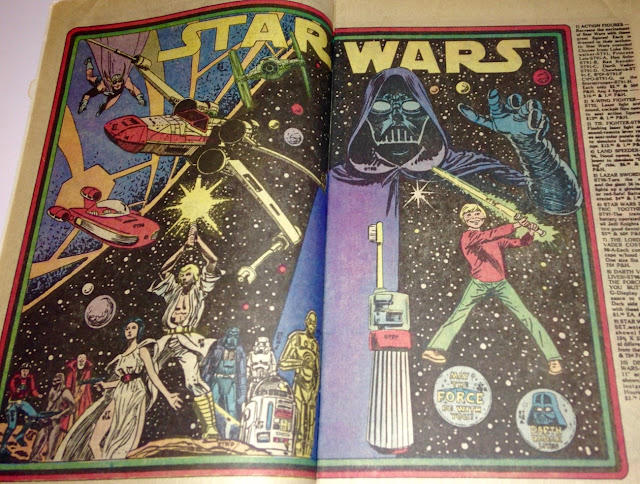 As expected, this early advertisement shows nine figures. They're featured along with the TIE Fighter, X-Wing Fighter, and Landspeeder -- the first three vehicles released in the line. 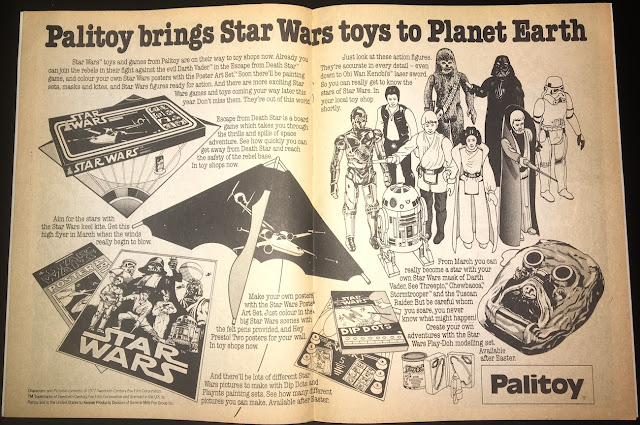 This British advertisement announcing the arrival in stores of Kenner-derived product shows that a similar situation prevailed overseas: When the line was first marketed, Palitoy presented only nine figures.

So, while development of the first nine figures wrapped up around March or April of 1978, the Jawa, Tusken Raider, and DSC were late bloomers -- in large part because Kenner began developing them at a later date.

In the case of the DSC, what was that date? 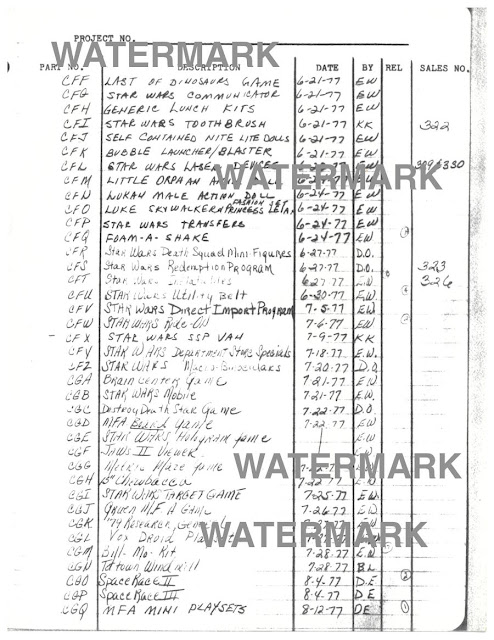 Fortunately, we have this early projects list, from the collection of Ross Cuddie, and it suggests that the Death Squad Commander (part no. CFR) was first proposed on June 27, 1977. That's over a month after the creation of the photo showing the original nine that's featured above.

In other words, there is no DSC in that photo because, in all likelihood, at the time it was taken no one at Kenner had seriously thought of creating one.

In case you're wondering, other sheets of this paperwork reveal that 3.75-inch figures, along with the TIE, X-Wing, and Falcon, were first proposed on March 8, 1977. That's over four months prior to the proposal of the DSC. In the toy business, as in the mortuary business, four months is a long time.

Oh, there's a bunch of additional cool stuff listed on the above piece of paperwork. Perhaps we'll tackle it in a future blog post. I know you're chomping at the bit to discuss Generic Lunch Kits.

Are you still with me, cowboy? Still driving our doggies along the high lonesome trail?

Okay, back to the DSC. The earliest known representation of the figure as it was eventually sold in stores is the original design drawing. This would have been sent to the sculptor to help him develop a sense of the figure and its features. Whereas the drawing of the DSC is dated to July of 1977, the drawings for the first nine figures date to either March or May of the same year. (Sadly, neither the Jawa drawing nor the Tusken Raider drawing bears a date.)

Using all of this data, I think we can propose a rough timeline:

Unfortunately, I can't say when the Jawa and Tusken Raider were first proposed, but I think the existing evidence makes it pretty clear that development of them began some time after the initiation of development of the original nine.

I also can't say when exactly the earliest three-dimensional representation of the Death Squad Commander was created, or explain why it looks like a black Stormtrooper.

Some have theorized that the figure you see in the group shot of 12 featured above is just the Stormtrooper from the shot of the original nine painted black. 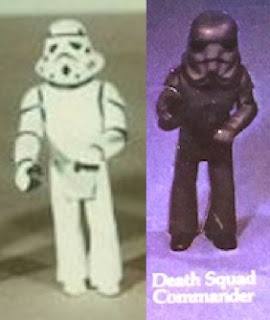 Here you see the two figures side by side. Though it's hard to make a call either way, to my eye these look like different figures. In particular, the helmet on the white Stormtrooper appears to be more flared at the base. It's possible that two different Stormtrooper mock-ups were created. That seems to have happened in the case of R2-D2: If you look closely at the R2 mock-ups featured in the shot of the original nine and the shot of the early display, you'll see that they differ in small ways.

Anyway, it seems to me that the key questions are: 1) Why did Kenner use a figure that looks like a black Stormtrooper to represent the Death Squad Commander, and 2) Is it all possible that this figure was intended to represent a TIE Pilot?

The answer to the first question is: Nobody knows.

It's quite possible that, needing a DSC figure for photography, and being pressed for time, the folks at Kenner simply grabbed a Stormtrooper mock-up and painted it black.

After all, of the first 12 figures, the Death Squad Commander is the only one without a public profile.

Shoot, Star Wars has been around for 40 years, and we still don't know what a death squad is, let alone what its commander looks like. In the eyes of the toy-buying public, a black Stormtrooper was probably as believable a leader of the death squad as any other character Kenner might have presented. 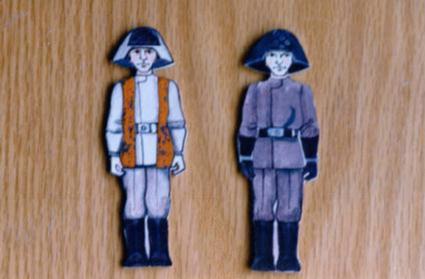 Curiously, Kenner did make an accurate two-dimensional representation of the DSC. You see it above. It would have been used to represent the toy in lieu of an accurate three-dimensional model, much as the cut-out of C-3PO is used in the above photo of the original nine. Of course, this piece is fascinating in large part because its mate, identical in all but paint scheme, suggests that Kenner considered repainting the DSC and releasing it as a Rebel Soldier.

It's hard to pin a date on these pieces. They may be coeval with the three-dimensional mock-up of the DSC. It's also possible that they postdate it slightly, being more related to a suggested repaint than to the earliest development of the figure. Regardless, I think it's obvious that, whenever they were created, Kenner knew exactly how the figure would look.

As to the second question -- Is it possible that the black Stormtrooper was intended to represent a TIE Pilot? -- I think the answer is: I dunno, what do you think?

Let me explain why this topic has come up.

A little while ago collector Thorsten Lafos posted a video from German television on Facebook. It contains some very interesting content from the early development of Kenner's Star Wars line, including shots of the original models of the TIE Fighter, Land Speeder, and X-Wing Fighter. It also boasts a great performance by Dieter Kronzucker, the German Cokie Roberts.

Assuming you were able to tear your attention away from Dieter, you may have paused the video and taken a hard look at the aforementioned models. If you did, you, like Thorsten, may have noticed something interesting.

Although the Land Speeder and X-Wing aren't shown with pilot figures, the TIE Fighter is. 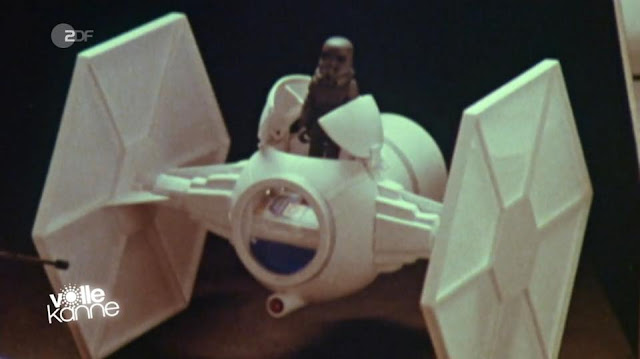 And the pilot is our friend the Death Squad Commander!

I mean the black Stormtrooper...I mean whatever that thing is supposed to represent.

Does that mean the DSC mock-up was originally meant to be a TIE Pilot?

Certainly, the fact that this figure, which resembles a TIE Pilot, was used in a video to represent a TIE Pilot is suggestive. And I suppose it's possible that, regardless of what the figure came to represent, at the time of its making it was intended as a TIE Pilot.

But outside of this video I am unaware of any evidence tying the figure to the TIE Fighter or suggesting that Kenner was even considering a TIE Pilot during this period of time. And I don't think the video alone is sufficient evidence for a reattribution, especially in light of all of the other evidence associating this mock-up with the Death Squad Commander.

Speaking of that evidence, I'll close out this post with a surprise: an early photo of Kenner's large floor merchandiser showing the Jawa, Tusken Raider, and Death Squad Commander mock-ups on cards. The figures also appear on the large header display. As far as I can recall, this is the first time the photo has been shared publicly. Enjoy.

UPDATE: Collector Scott Bradley reminded me that a photo similar to the one shown below appears in Kenner's 1978 Toy Fair catalog. However, the photo in the catalog is much smaller, and the prototype figures are harder to see. 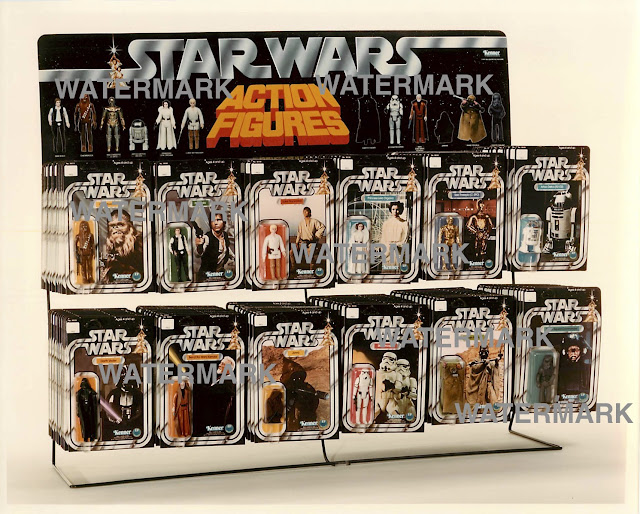