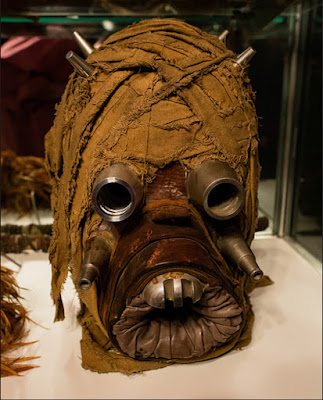 Senior editor and creator of the Star Wars Collectors Archive Gus Lopez has announced that he will be adding new entries to the Archive as well as updating older entries based on his "Daily Grail" series on social media. Several new entries will be added weekly and will include original movie props, vintage toy prototypes and other one-of-a-kind pieces from all aspects of the Star Wars galaxy. Any collector will not be disappointed by each of these iconic pieces, so be certain not to miss them in the SWCA's "What's New" section!

Here are the first new entries:

Ross Barr shares pictures of a very rare Spanish Return of the Jedi Colgate toothpaste premium.
For a very limited time, Colgate toothpaste and PBP ( the Spanish sub-licensee of Kenner toys in Spain) offered a free Star Wars action figure packaged with each tube of toothpaste. This example with an AT-AT Driver was found by a collector in Madrid is only the second example known to have survived.

The original thread in the Imperial Commissary can be found here:
ROTJ Colgate AT-AT Driver

A Limelight Worth a Look: Repurposing a Store Display 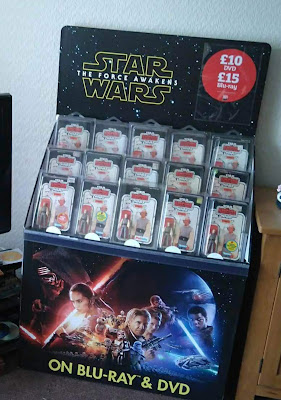 Derek Torc McLean cleverly uses a modern Star Wars DVD store display to feature his vintage carded Lobot focus. This approach is both visually appealing for the vintage pieces as well as for the otherwise clumsy appearing empty store display.

The original thread in the Empire Strikes Back Vintage Collecting can be found here: Repurposed TFA Store Display 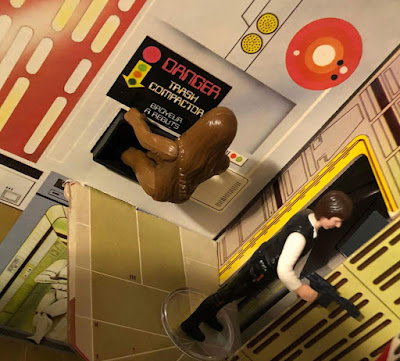 Palitoy and many International Kenner sub-licensees produced a well appreciated and inexpensive pressboard Death Star Play Centre designed for the 3.75 inch figures. These sets were printed in different countries and have quirky variations. Mike Freeman notes one of these variations on the trash compactor signage of his Canadian Death Star which is discussed on this thread in La Guerre des Etoile (Star Wars) Collectors Group.

Collector Barry Chalmers uncovers the prototype for an unproduced "Luke Skywalker wrist Communicator" toy concept. The prototype is then pieced back together based on previously found concept art for the piece.

The original thread in the Prototype Exchange Group can be found here:
Unproduced Wrist Communicator

A Limelight Worth a Look: Power Droid Proofs 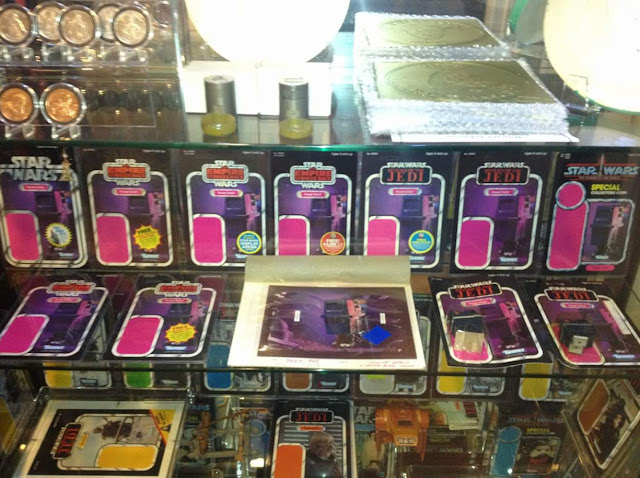 Collector Phidias Barrios shares his Power droid focus including the Original photo art used to create the cardback in this thread in the 12 Back Group:
Power Droid 2D Run

Take the AT-AT to Midtown 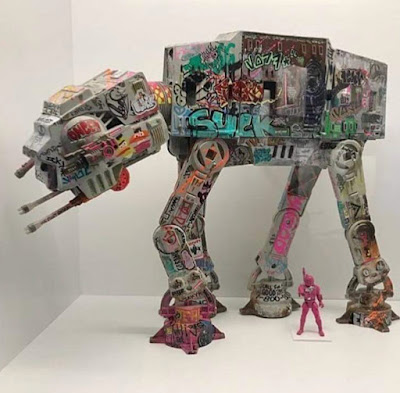 The original thread on the Imperial Commissary can be found here:
Sucklord AT-AT 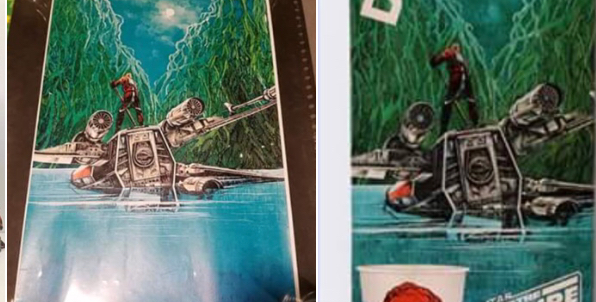 Collector Eric Daniel Vandever shares a printers proof of the artwork for the Dagobah scene printed on many boxes of Dixie cups in this thread in the Star Wars Displays and Advertising Group.

Is that Yupi Supposed to be Leia? 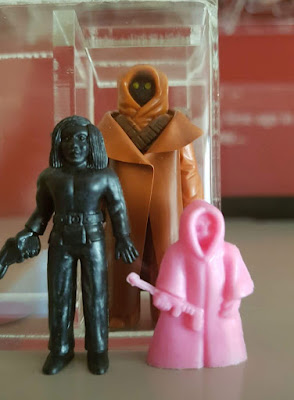 The elusive line of Star Wars figures manufactured by the Yupi company in Colombia were produced from original miniature character sculpts which were based on the Kenner line of 3.75 inch action figures. The Princess Leia figure is one of a few notable exceptions which does not have any resemblance to the Kenner figure, or to the character for that matter. This point is discussed by the Echo Base Vintage Variants Group in this thread. 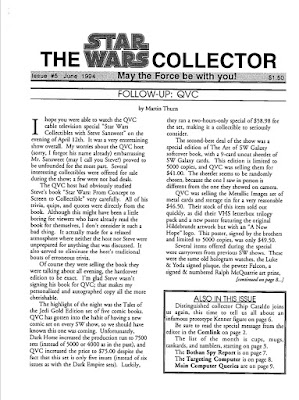 Collector Martin Thurn shares issue #5 of The Star Wars Collector. Originally released in June of 1994, this issue includes an interview with the ever-present Steve Sansweet, including a discussion of his appearances on QVC. 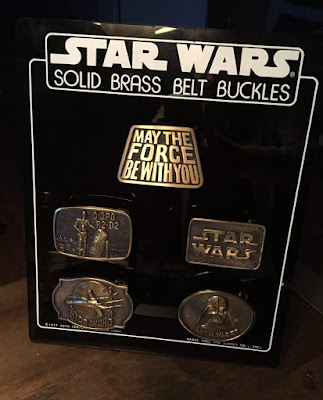 The big brass belt buckle craze of the 1970s left the Star Wars fan many choices of shiny imagery to adorn their Levi’s. Basic Tool & Supply was one of the very early licensed manufacturers of Star Wars belt buckles. They had 6 original designs forged from solid brass.The designs were very popular and were also produced in cheaper brass plated and painted versions by other belt buckle manufacturers, including The Leather Shop and Lee. Collector and author Pete Vilmur shares his Basic Tool & Supply store display for the solid brass buckles accompanied by 5 of the buckles.

The original thread in the Star Wars Displays and Advertising Group can be found here:
Belt Buckle Display

We Shall Double Our Efforts! 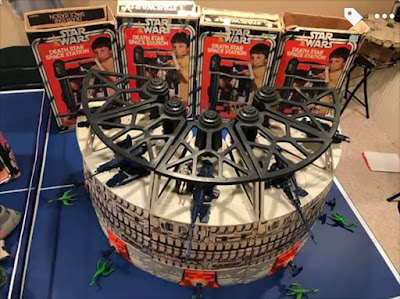 In 1979 Kenner produced a multiple level wedge shaped Death Star Space Station to be used with their 3.75 inch line of action figures. The set includes multiple play environments designed to recreate action scenes from the film. Collector Andrew Solomon assembled 5 consecutive Death Star Space Stations resulting in an impressive semicircular display. As it turns out, 10 space stations would create a full circle. The Emperor would be pleased.

The original thread in the Imperial Commissary can be found here:
5 Death Stars Assembled


A Limelight Worth a Look: Droids and Ewoks Coins 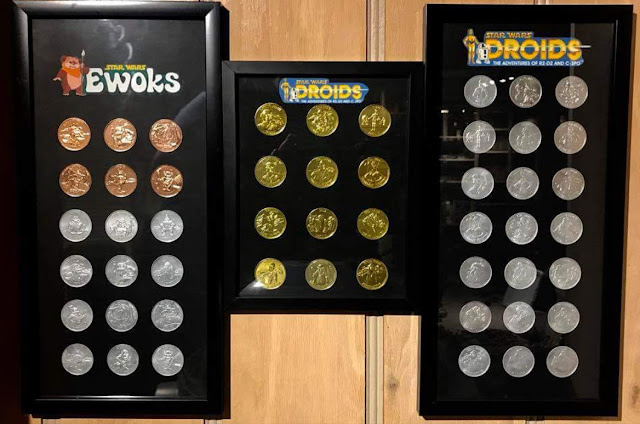 Collector Ryan Lehmkuhl assembled a complete set of non-anodized aluminum prototype coins for the Droids and Ewoks lines including examples for all of the unproduced figures from the never released second waves. Ryan shares pictures of this impressive accomplishment in this thread in Power of the Force Coins Group.

Further reading on the Archive:
Unproduced Droids and Ewoks
The Comprehensive Guide to POTF, Droids, and Ewoks Coins 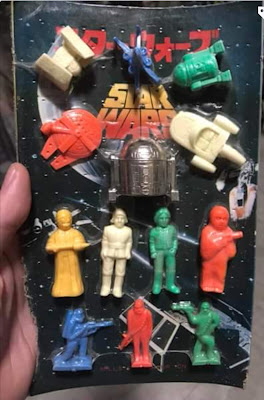 Collector Rob David shares a picture of a very rare Japanese vending machine display for Keshigomu and Gaphacon toys. Included on the display are some rare variations of Keshi.

The original thread in the 12 Backs Group can be found here:
Keshigomu Toys 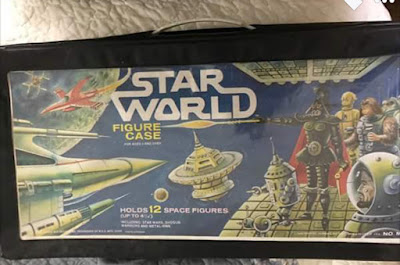 The unprecedented success of the Kenner Star Wars action figure line gave rise to many companies trying to capitalize on the phenomenon. One item that was easy for secondary companies to manufacture at low cost were storage cases for the action figures. Several companies manufactured action figure cases similar to the licensed Kenner action figure cases with cheaper quality materials at a lower price point. Despite their inferior quality, the bootleg cases feature unique and interesting cover art which give them a kitschy quality. Collector Alan Williams rediscovers one of these knockoff cases and discusses it on the Imperial Commissary.

Further reading on the Archive:
Storage On the Cheap: Making a Case for Unlicensed Carrying Cases


Our Star Wars Community Digest Time Capsule Thread for this Issue:
The Mysterious Luke in Robes 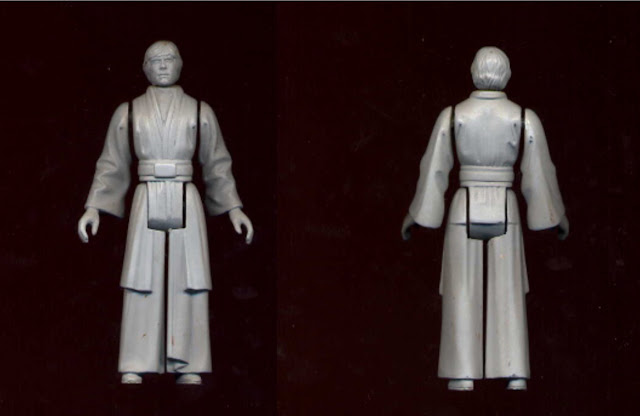 As prototype toy  material was uncovered in Cincinnati -- the Hometown of Kenner Toys in the late 90’s -- unproduced conceptual prototype  toys were discovered along with production prototype pieces. These conceptual pieces often had no known provenance and their individual roles in the Star Wars toy production story remained a mystery open to conjecture.

Arguably the most infamous unknown conceptual piece found was dubbed the “Luke in Robes” figure. The Luke figure was found only in hardcopy form, made from hand poured resin and primed in a grey color. Its ultimate final appearance and color scheme remained a mystery. Opinions varied as to the figures role in the toy line. Many collectors thought that the figure may have been a proposed new Power of the Force figure which was never released.

On November 5th, 2006 this long standing hobby mystery was solved on the Rebelscum forums. Sit back and enjoy the fun read as you find the answer:

Luke in Robes discovery?
Posted by Stephen Danley at 11:44 AM