Yeah, we've been pretty quiet around here of late. We're all still recovering from Celebration. Did you go? If not, what is wrong with you?

Among the cooler Celebration things I was involved in was something known as the Collector Showcase. It was devoted to display boards focused on various collectors, which were displayed along one wall of the secondary Collecting Track room. I thought it'd make sense to share the boards on the blog for the benefit of the hosers who didn't make the show. 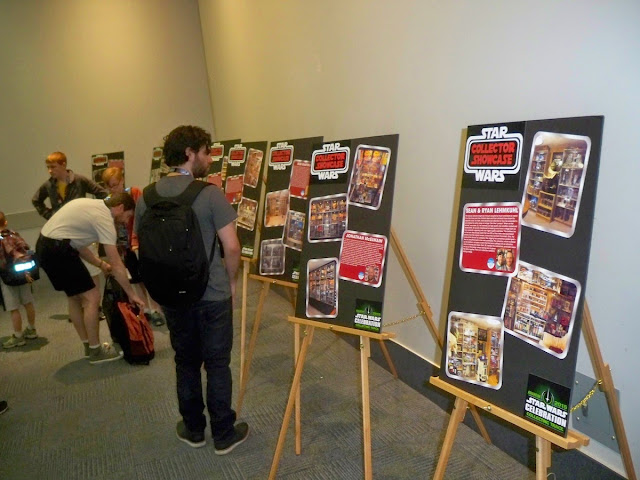 I worked on this project with Todd Chamberlain and Jarrod Clark. Jarrod did all the design work on the boards themselves. He did a great job (as usual). 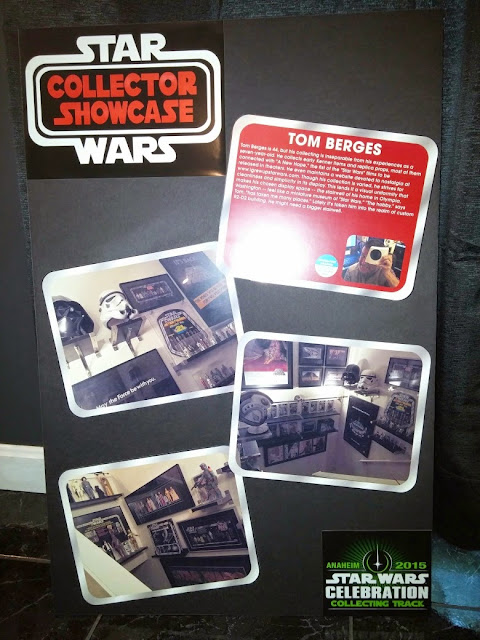 Tom Berges is 44, but his collecting is inseparable from his experiences as a seven-year-old. He collects early Kenner items and replica props, most of them connected with "A New Hope," the first of the Star Wars films to be released in theaters. He even maintains a website devoted to nostalgia at www.igrewupstarwars.com. Though his collection is varied, he strives for cleanliness and simplicity in its display. This lends it a visual uniformity that makes his chosen display space -- the stairwell of his home in Olympia, Washington -- feel like a miniature museum of Star Wars. "The hobby," says Tom, "has taken me many places." Lately it's taken him into the realm of custom R2-D2 building. He might need a bigger stairwell. 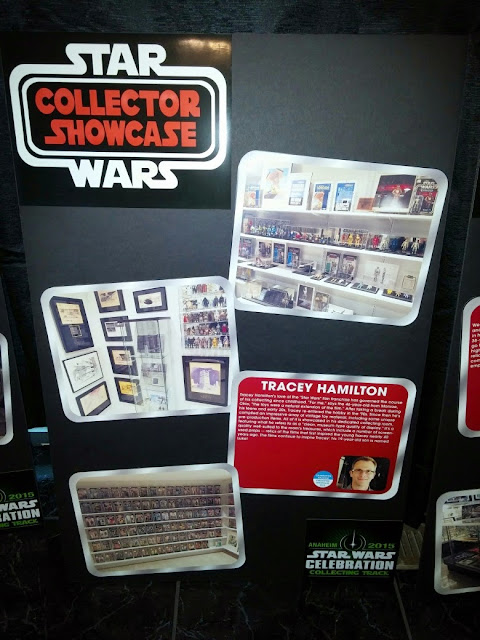 Tracey Hamilton's love of the Star Wars film franchise has governed the course of his collecting since childhood. "For me," says the 46-year-old from Monroe, Ohio, "the toys were a natural extension of the film." After taking a break during his teens and early 20s, Tracey re-entered the hobby in the '90s. Since then he's compiled an impressive array of vintage toy material, including some unique pre-production items. All of it is showcased in his dedicated collecting room, featuring what he refers to as a "clean, museum-type quality of display." It's a quality well-suited to the room's treasures, which include a number of screen-used props -- relics of the films that first inspired the young Tracey nearly 40 years ago. The films continue to inspire Tracey: his 19-year-old son is named Luke! 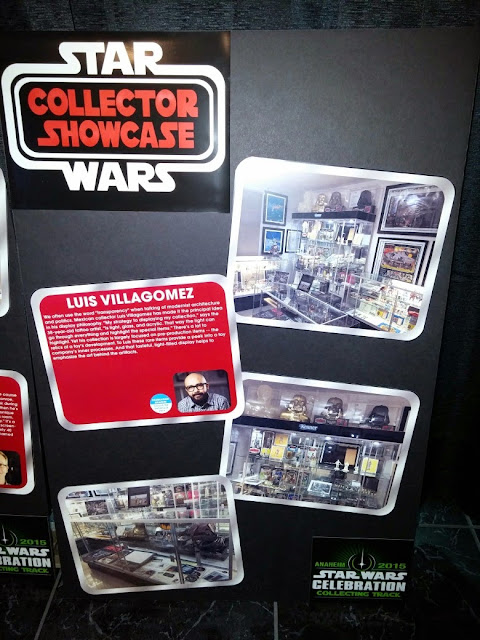 We often use the word "transparency" when talking of modernist architecture and politics. Mexican collector Luis Villagomez has made it the principal idea in his display philosophy. "My strategy to displaying my collection," says the 38-year-old tattoo artist, "is light, glass, and acrylic. That way the light can go through everything and highlight the special items." There's a lot to highlight. Yet his collection is largely focused on pre-production items -- the relics of a toy's development. To Luis these rare items provide a peek into a toy company's inner processes. And that tasteful, light-filled display helps to emphasize the art behind the artifacts. 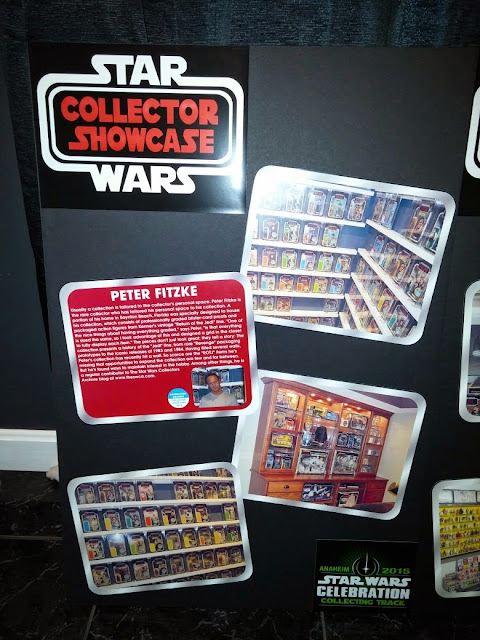 Usually a collection is tailored to the collector's personal space. Peter Fitzke is the rare collector who has tailored his personal space to his collection. A portion of his home in Boynton Beach, Florida was specially designed to house his collection, which consists of professionally graded blister-card proofs and packaged action figures from Kenner's vintage Return of the Jedi line. "One of the nice things about having everything graded," says Peter, "is that everything is sized the same, so I took advantage of this and designed a grid in the closet to fully display each item." The pieces don't just look great; they tell a story: The collection presents a history of the Jedi line, from rare Revenge packaging prototypes to the iconic releases of 1983 and 1984. Having filled several walls, Peter's collection has recently hit a wall. So scarce are the "ROTJ" items he's missing that opportunities to expand the collection are few and far between. But he's found ways to maintain interest in the hobby. Among other things, he is a regular contributor to The Star Wars Collectors Archive blog at www.theswca.com. 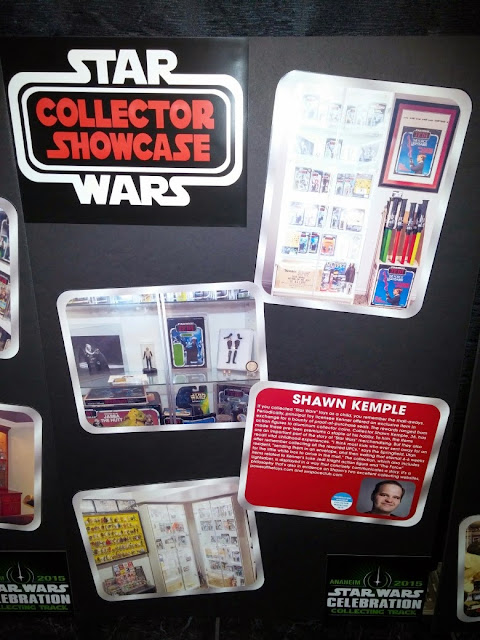 If you collected "Star Wars" toys as a child, you remember the mail-aways. Periodically, principal toy licensee Kenner offered an exclusive item in exchange for a bounty of proof-of-purchase seals. The rewards ranged from action figures to aluminum collector coins. Collector Shawn Kemple, 36, has made these pre-teen premiums a staple of his hobby. To him, the items are an important part of the story of Star Wars merchandising. But they also recall vital childhood experiences. "I think most kids who ever sent away for an offer remember collecting all the required UPCs," says the Springfield, Utah resident, "sending them in an envelope, and then waiting that eternal 4-6 weeks for the little white box to arrive in the mail." The collection, which also includes items related to Kenner's Luke Jedi Knight action figure and "The Force" Lightsaber, is displayed in a way that concisely communicates a story. It's a philosophy that's also in evidence on Shawn's two excellent collecting websites, powerofthetoys.com and swspaceclub.com. 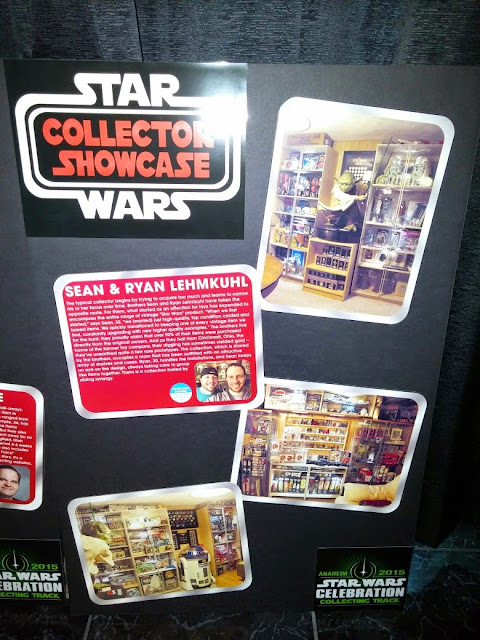 The typical collector begins by trying to acquire too much and learns to narrow his or her focus over time. Brothers Sean and Ryan Lehmkuhl have taken the opposite route. For them, what started as an affection for toys has expanded to encompass the entire range of vintage Star Wars product. "When we first started," says Sean, 32, "we [wanted] just high-quality, top condition carded and boxed items. We quickly transitioned to keeping one of every vintage item we find, constantly upgrading with new higher quality examples." The brothers live for the hunt; they proudly claim that over 90% of their items were purchased directly from the original owners. And as they hail from Cincinnati, Ohio, the home of the Kenner toy company, their digging has sometimes yielded gold -- they've unearthed quite a few rare prototypes. The collection, which is shared by the brothers, occupies a room that has been outfitted with an attractive array of shelves and cases. Ryan, 30, handles the installations, and Sean keeps an eye on the design, always taking care to group like items together. Theirs is a collection fueled by sibling synergy. 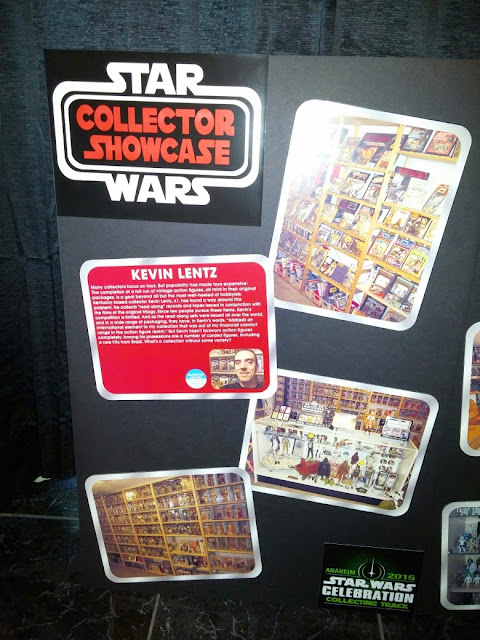 Many collectors focus on toys. But popularity has made toys expensive: The completion of a full run of vintage action figures, all mint in their original packages, is a goal beyond all but the most well-heeled of hobbyists. Kentucky-based collector Kevin Lentz, 41, has found a way around this problem: He collects "read-along" records and tapes issued in conjunction with the films of the original trilogy. Since few people pursue these items, Kevin's competition is limited. And as the read-along sets were issued all over the world, and in a wide range of packaging, they have, in Kevin's words, "add(ed) an international element to my collection that was out of my financial comfort range in the action figure realm." But Kevin hasn't forsworn action figures completely. Among his possessions are a number of carded figures, including a rare Vlix from Brazil. What's a collection without some variety? 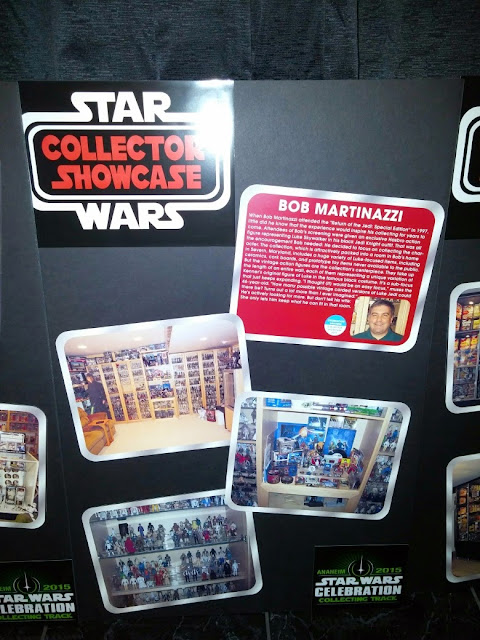 When Bob Martinazzi attended the Return of the Jedi: Special Edition in 1997, little did he know that the experience would inspire his collecting for years to come. Attendees of Bob's screening were given an exclusive Hasbro action figure representing Luke Skywalker in his black Jedi Knight outfit. That was all the encouragement Bob needed: He decided to focus on collecting the character. The collection, which is attractively packed into a room in Bob's home in Severn, Maryland, includes a huge variety of Luke-focused items, including ceramics, cork boards, and prototype toy items never available to the public. But the vintage action figures are the collection's centerpiece. They take up the length of an entire wall, each of them representing a unique variation of Kenner's original figure of Luke in the famous black costume. It's a sub-focus that just keeps expanding. "I thought (it) would be an easy focus," muses the 46-year-old. "How many possible vintage carded versions of Luke Jedi could there be? Turns out a lot more than I ever imagined." He's actively looking for more. But don't tell his wife: She only lets him keep what he can fit in that room. 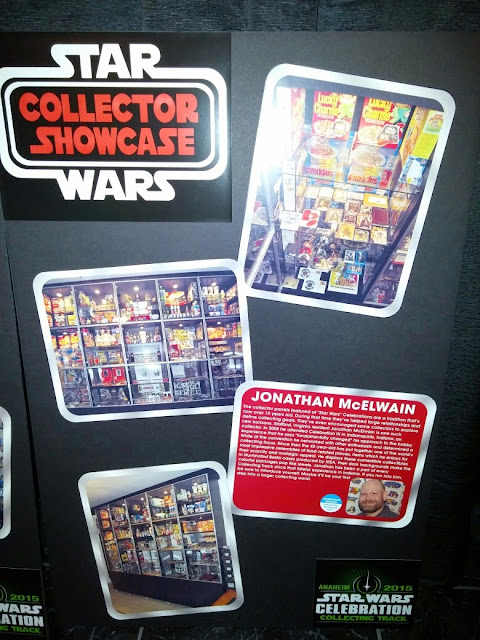 The collector panels featured at Star Wars Celebrations are a tradition that's now over 15 years old. During that time they've helped forge relationships and define collecting goals. They've even encouraged some collectors to explore new horizons. Stafford, Virginia resident Jonathan McElwain is one such collector. In 2005 he attended Celebration III in Indianapolis, Indiana, an experience that he says "fundamentally changed" his approach to the hobby. While at the convention he networked with other enthusiasts and determined a collecting focus. Since then the 42-year-old has put together one of the world's most impressive assemblies of food-related pieces, items which he enjoys for their scarcity and nostalgic appeal. He displays these comestible collectibles in illuminated Besta cases produced by IKEA; their dark backgrounds make the colorful packages pop like jewels. Jonathan has been a part of every Collecting Track since that fateful experience in Indiana. If you run into him, be sure to introduce yourself. Maybe it'll be your first step into a larger collecting world. 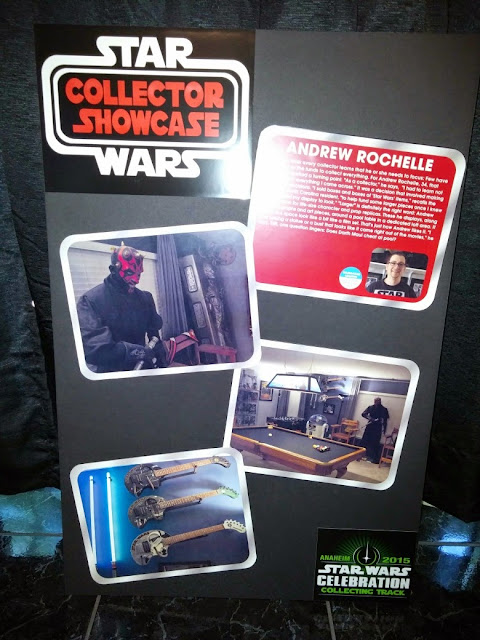 Sooner or later every collector learns that he or she needs to focus: Few have the space or the funds to collect everything. For Andrew Rochelle, 34, that realization marked a turning point. "As a collector," he says,  "I had to learn not to just collect everything I came across." It was a decision that involved making some hard decisions. "I sold boxes and boxes of Star Wars items," recalls the Huntsville, North Carolina resident, "to help fund some larger pieces once I knew how I wanted my display to look." "Larger" is definitely the right word: Andrew has a passion for life-size character and prop replicas. These he displays, along with autographs and art pieces, around a pool table in a dedicated loft area. It makes the space look like a bit like a film set. That's just how Andrew likes it. "I love seeing a statue or a bust that looks like it came right out of the movies," he says. Still, one question lingers: Does Darth Maul cheat at pool?