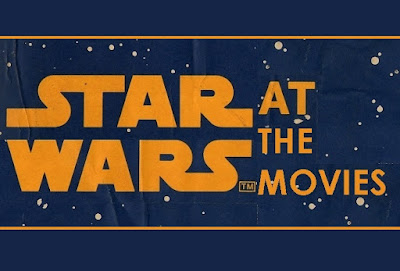 With present day in-theater promotional items mostly consisting of various bits and bobs for purchase (think about your snazzy Captain Phasma 3-D glasses or BB-8 cup topper), there are still opportunities to leave the cinema with some free merchandise. Such was the also the case with the initial theatrical runs for the original trilogy. This installment of "Star Wars at the Movies" will highlight a sampling of such premiums that were available to moviegoers around the world for sale or as giveaways. 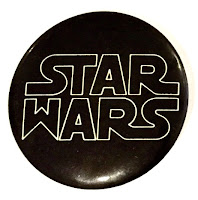 Our first item is one that was actually handed out to theater employees and customers prior to the original film's release. This pinback button features the early "pointy W" incarnation of the Star Wars logo that is a primary signature of the film's pre-release collectibles. Though it bares no licensing information, it was most likely distributed by 20th Century-Fox to theatrical venues along with the film's teaser trailer during the Christmas season of 1976 to ramp up marketing efforts on the front lines. 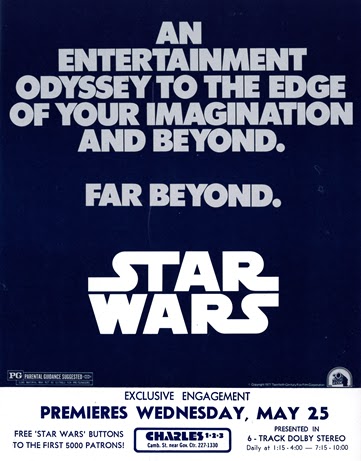 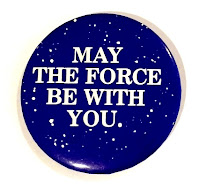 As the May 25th, 1977 limited engagement premiere date approached, heralds advertising the film's release began to appear. The blank area at the bottom of these flyers was used by theaters in participating markets to list local venue information and promotions. What better way to get butts in the seats than to offer a free 'STAR WARS' button? The Charles Theater in Boston was one of several that offered buttons with the "May the Force Be With You" catchphrase to their first 5,000 patrons.

Those lucky enough to attend U.S. pre-release press screenings for each original trilogy installment were able to receive simple programs or "credit sheets" with the respective film's logo donning the front of a foldout with complete cast and production credit listings inside. 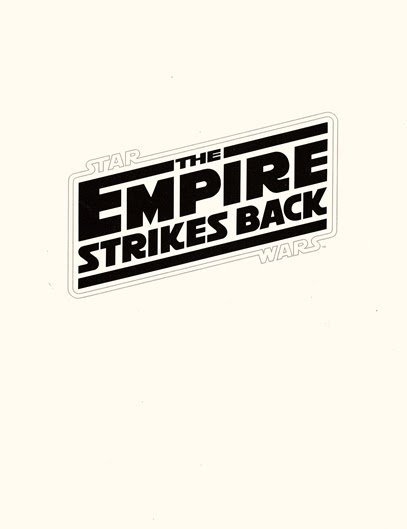 This two-sided Spanish credit sheet for the original film has the Style C poster artwork on the front and cast/crew/plot information on the back, as well as some lively "FRASES DE PUBLICIDAD" heralding the film's box office success. The film was released in Spain in November, 1977.


These days, souvenir programs are typically only available at prestigious theatrical presentations in select venues, which for the general public are unfortunately increasingly few and far between. When Star Wars was released in 1977, however, they represented one of the nicer keepsakes available to many cinema patrons. Published by George Fenmore Associates -- whose parent company produced numerous movie programs from the 1960s to the 1980s -- the original Star Wars program featured Tom Jung's artwork from the theatrical half sheet poster and included 18 pages of photographs, character and actor biographies, and behind-the-scenes information about the making of the film (along the lines of the pressbook described in the first post of this series). The first printing of the program has a glossy cover and interior pages, while later printings (including those distributed in the United Kingdom) have a pebble textured cover and matte interior pages. As stated at the back of the program, additional copies could be ordered by mail for a reasonable $1.50 each.


Rather than traditional programs, "Official Collectors Edition" magazines were produced for The Empire Strikes Back and Return of the Jedi. Published in the U.S. by Paradise Press, Inc., the magazines contain roughly 60 pages of  written sections on the filmmakers, characters, plotlines, and making of the films interspersed with color photos and attractive two-page spreads of Ralph McQuarrie concept paintings. Though these were available for purchase in theaters, they were not exclusively sold there.


The cover for the Empire Strikes Back edition notably uses the earlier and "busier" version of Roger Kastel's Style A poster artwork which includes representations of Cloud City, Lando, Boba Fett, and an apparently integral new character, the Rebels' Radar Laser Cannon.

It's odd to think about a time before Empire's big paternity reveal was common knowledge. While going into fairly specific detail about the majority of the film's story in the magazine's 3-part plot synopsis section, the final confrontation between Luke and Vader is only very briefly summarized and its implications are agonizingly absent.


"Her icy control is necessary on many occasions when the Rebel forces come under attack from the Empire. Once again in The Empire Strikes Back she proves she's got stamina, determination and can handle a blaster as well as any space ranger."

A Toy Story crossover immediately comes to mind, with Leia teaming up with Buzz Lightyear to take down the evil Emperor Zurg.


Return of the Jedi's cover appealingly sports Tim Reamer's Style A poster artwork, which -- as mentioned in the highly recommended Star Wars Poster Book (2005) -- was designed with the intention to "sum up all three films in one kind of poetic symbol," i.e. the lightsaber.

The "behind the scenes" emphasis in the Jedi edition speaks to the massive mythmaking emporium that Lucasfilm and ILM had become by the time of the film's development and production. A good portion of the magazine is dedicated to anecdotes from visual effects, sound design, and creature shop stalwarts such as Dennis Muren, Ben Burtt, and Phil Tippett. The latter provides a quote that characterizes it best: "After Star Wars and The Empire Strikes Back, Return of the Jedi was to be our Graduate Thesis."

The original film didn't make its debut in Asian countries until mid-1978. This program from South Korea prominently incorporates the film's success at the 50th Academy Awards (though I'm not exactly sure why 8 Oscars are depicted; the film won 6 -- plus Ben Burtt's Special Achievement Award -- and was nominated for 4 others). I'm also unsure what the 9th award on the right might be. If anyone knows, please let us know in the comments section.


This 12 page oversize program for The Empire Strikes Back from Japan utilizes the fantastic poster artwork by the late Noriyoshi Ohrai to especially stylish effect.


Japanese cinemas also offered smaller but ever attractive pieces of movie memorabilia in a unique form of handbills called "Chirashi" that are still produced to this day. Our very own John J. Alvarez has a Special Feature here on the SWCA titled "A Guide to Collecting Star Wars Chirashis" that serves as a perfect primer for those interested in pursuing these really neat and affordable items. Artwork derived from Japanese theatrical posters adorn the fronts of the Chirashi, while the backs usually contain credits and other information about the films.

In conjunction with the original film's release, 20th Century-Fox and/or the Star Wars Corp. coordinated a set of trademarked bumper stickers pertaining to specific Southern California theaters: Mann's Chinese Theatre in Hollywood, the Avco in Westwood, and the Plitt Citer Center Theatres in Orange. Whether or not the stickers were sold or handed out at these venues is undetermined. If you happened to get one back in the day, let us know in the comments!


A similarly styled "Wookies [sic] Need Love Too" sticker was also produced, of which a tough-to-find (and fantastically funky) unlicensed version also made the rounds in the late 70s.


Though this next item was actually not given out to theater-goers, it's worth mentioning. Measuring about 9 x 9.5 inches, this rare octagonal sticker depicting C-3PO and R2-D2 was one of several that was part of a display in German cinemas. Others in the set featured logical pairings of Luke & Leia, Han & Chewie, Darth Vader and Ben Kenobi, and Jawa & Tusken Raider.


What is it with Swedes and Ewoks? These stickers featuring our furry hero Wicket W. Warrick were handed out as promotional items at theaters in Sweden when Return of the Jedi was released in the fall of 1983. This example was a generous gift from Swedish collector David Löfberg.


It's encouraging as a Star Wars moviegoer and collector to see that theatrical special format presentations and related promotional items remain a tradition in this day and age. The fact that The Force Awakens had limited engagements in 70mm IMAX and offered audiences several traditional ephemeral mementos (in addition to the modern-day knickknacks) has provided an opportunity for fans who missed the original trilogy's theatrical era such as myself to collect these items at their point of origin -- an experience definitely enhanced when the film in question is an enjoyable one. 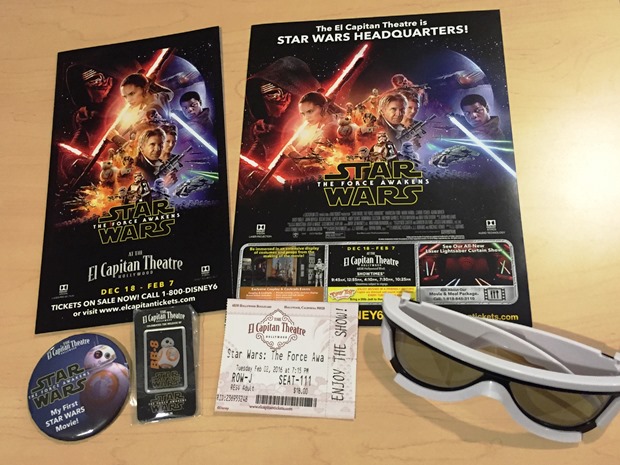 Special thanks to Duncan Jenkins and Pete Vilmur for providing information and additional select images.
Posted by Stephen Danley at 2:00 PM