To celebrate the anniversary of the original releases of Star Wars and Return of the Jedi on May 25th, 2016, a previously obscure and for the most part undocumented British teaser trailer for Revenge of the Jedi was released by the Academy of Motion Picture Arts & Sciences via YouTube with an accompanying post detailing its historical context on Oscars.org. Over the following hours and days, the trailer which hadn't been seen by the public since 1982 caused quite a stir and received substantial attention in various online media outlets. To see such a short, stark, and simple little teaser that offers tantalizingly little to viewers at face value be the subject of such commotion speaks to the staying power of Star Wars as a pop culture phenomenon. What really makes this seemingly unexceptional artifact special, however, is where it fits within the larger timeline of Star Wars and its marketing as a franchise with worldwide success.


I had the privilege of collaborating on this project with Pete Vilmur, longtime SWCA Editor and current Senior Writer & Fan Relations at Lucasfilm -- without whom the identification of and backstory on the teaser would not have been possible to confirm. While the major components of the trailer's origins are covered in the piece we co-wrote for the Academy website, I realized there were several aspects of the story that deserve to be told as far as its interesting past, its discovery, and ultimately, its preservation.

With the Archive being a collecting-focused website, the Star Wars collecting community's role in the trailer resurfacing is an appropriate place to begin. The truly key player in all of this is Bill Gould, a former cinema projectionist who worked in Hampshire, England and had been the trailer's owner and caretaker for over 27 years. Gould had uncovered it in a projection booth at the Centre Cinema in Lymington where he began working in 1983. It was spliced among hundreds of feet of countdown leader and footers on a partially filled 2000 ft. reel containing several other trailers and advertisements. Intrigued, he separated it from the reel and threaded up the projector for a test viewing after the current film's attendees had vacated the theater. Several years later when he left his position at the cinema, it was given to him as a parting gift along with a thank you note for the time he had put in.

An avid Star Wars fan and collector, Gould (pictured in the upper left disguised as the nefarious bounty hunter Boba Fett) and his Centre Cinema colleagues received "top honours" for their Return of the Jedi float in the town's annual carnival in August, 1983, which was aptly movie-themed.

Flash forward to November, 2015 where Gould had posted images of the peculiar 35mm print on the Rebelscum Forums - a longstanding hub of Star Wars collecting discussion and activity. It was here that both Pete and I became aware of the trailer, and as the details of its physical characteristics and provenance emerged, it became clear that what he had was certainly unique, and quite possibly very rare.

In the process of corresponding with Bill and attempting to concretely identify the trailer, I proffered the option of providing an archival home for it in the event that he was ever interested. Having worked at the Academy Film Archive as a cataloger for the past few years, this was the first opportunity I'd had to extend any agency in terms of helping to conserve something, let alone an item that held such personal meaning for me as a Star Wars enthusiast. Despite other offers from understandably interested parties, Bill informed me a few months later that he was ready to part with the trailer and I was able to arrange for it to be added to the Academy's collection. Where things would go from there was undetermined at the time, but I was hopeful that due to its likely significance (and its short length), it could at least be digitally transferred without great cost and possibly shared with a wider audience.

It was at this point that I reached out to Pete Vilmur to not only amass as much background information about the trailer and its relation to Return of the Jedi's British release as I could, but also to gauge the probability of gaining Lucasfilm's approval for the Academy to share it publicly. By this time, Pete had already been conducting his own research into the company's marketing files, which like so many archives proved to be of incredible value. In addition to explaining the trailer's title cards advertising a Christmas 1983 release (as discussed in the original post on Oscars.org), the documents that Pete unearthed shed light on related merchandising matters that collectors might find of interest. According to a meeting journal from late April, 1982 (a month before the U.K. Star Wars/Empire Strikes Back double-bill premiered with the Revenge teaser) which documented a consultation between Kenner and European marketing specialists, British toymaker Palitoy -- which had been manufacturing and distributing licensed Star Wars toys in England since 1978 -- was "concerned about the Christmas release of Jedi as it [would] severely hamper their toy sales." An annotation on the notes suggests that European toy companies actually preferred a Christmas release. This original confusion or miscommunication notwithstanding, all contingents would eventually agree on a summer release date. 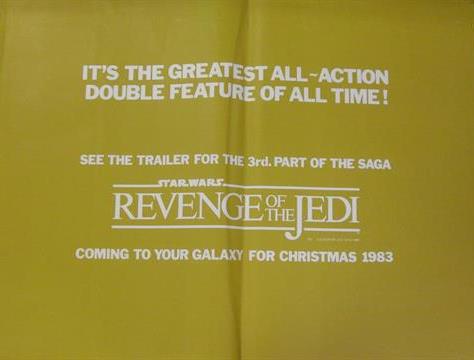 Another critical clue that aided in dating the trailer came in the form of the above initially unidentified double-bill poster image that Bill had saved from an internet search which advertised a Revenge of the Jedi trailer and a Christmas 1983 release for the film. With help from Pete, this was pinpointed as an extremely scarce snipe poster included in a rare six-piece Marler Haley ensemble for the May, 1982 Star Wars/Empire Strikes Back British double-bill. Without the subsequent images provided by Steve Sansweet at Rancho Obi-Wan, a principal piece of the puzzle would have been absent and the impact of the trailer's reappearance would have suffered.


On the preservation front, the original 35mm print was scanned frame by frame at 2K, resulting in preservation-quality files that were also shared with Lucasfilm's film archive department. Aside from some minor color correction with the main title card (which needed a bit more of that Revenge red), the trailer's intrinsic imperfections were left as they were.

It's remarkable how much energy can go into something which by all appearances is relatively inconsequential. It took a genuinely collaborative effort from a team of individuals representing multiple constituencies for this ephemeral piece of Star Wars history to be revived and protected for future generations. The trailer's mere 32 seconds may not seem all that impressive to contemporary eyes, but to imagine the excitement those 32 seconds must have instilled in those lucky British moviegoers getting a first look at a highly anticipated American blockbuster months before fans in the U.S. really puts things in perspective. This is why we do the work we do.
Posted by Stephen Danley at 2:17 PM