Kenner Store Displays by the Numbers

Kenner store displays are hot right now. Have you noticed?

They're so hot that I've decided to devote a blog post to them. I figure I better do one now before displays sink back into obscurity, leaving the limelight to the real treasures of the hobby, like red-bar R5-D4.

A good buddy of mine was lucky enough to acquire some Kenner documents containing information concerning the company's vintage point-of-purchase material. He's graciously allowed me to share some of it. As far as I know, this information has never before been revealed to collectors. 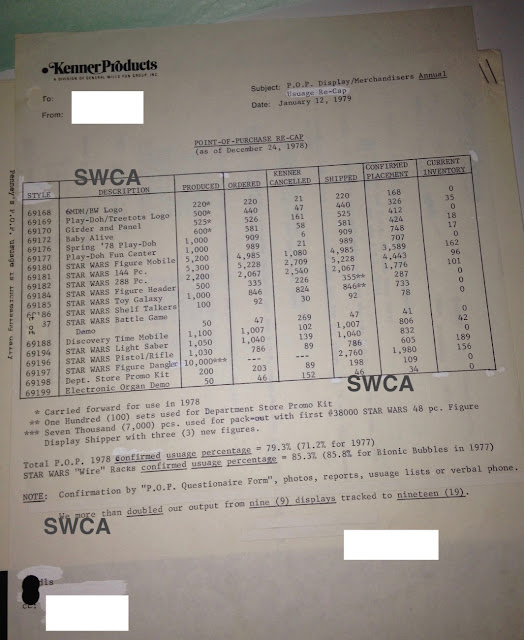 The first of these documents dates from January of 1979; it concerns display material issued in support of Kenner products during the course of 1978. The title "Point-of-Purchase Re-Cap" suggests it covers store-display distribution for the whole of '78.

If you're not very familiar with Kenner's Star Wars displays, the information contained on the document is probably a little cryptic. 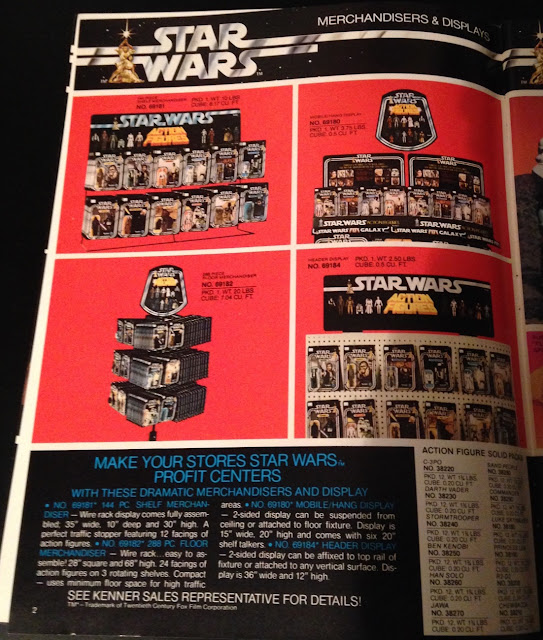 The "Merchandisers & Displays" page from the Star Wars section of Kenner's 1978 Toy Fair catalog will help clear things up. As you can see, the terminology on the document matches the photos and text in the catalog. 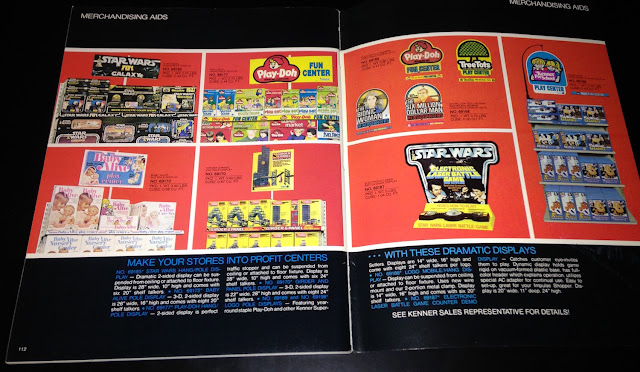 The "Merchandising Aids" section at the back of the catalog provides info on two of the remaining Star Wars items referenced by the document.
Three additional Star Wars items are mentioned in the re-cap. 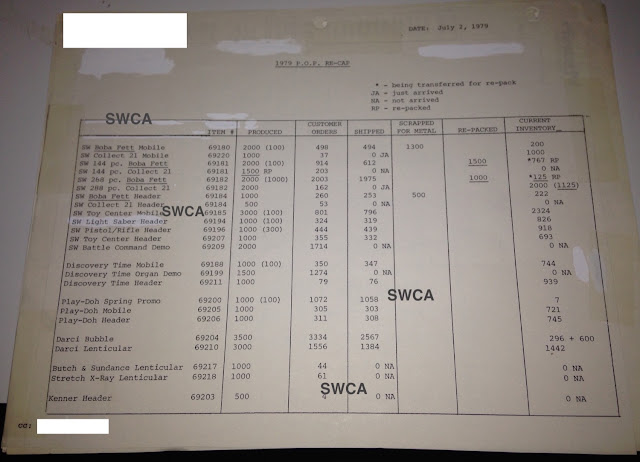 The next document we'll discuss dates from July of 1979, or around six months after the 1978 re-cap. Like its predecessor it's a summary of display material produced and shipped during the months immediately preceding the date on the document. 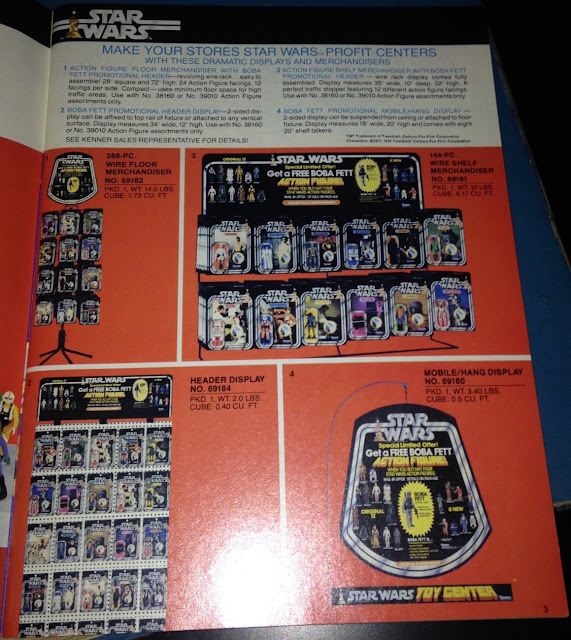 This page from the 1979 Toy Fair catalog will help you visualize the items referenced in the re-cap. 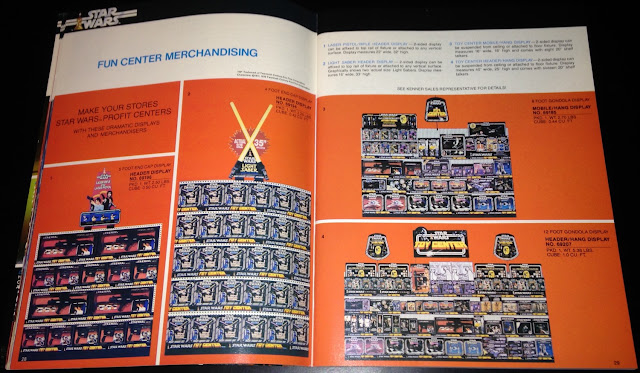 The "Fun Center Merchandising" section near the back of the catalog pictures several additional Star Wars displays referenced by the re-cap. 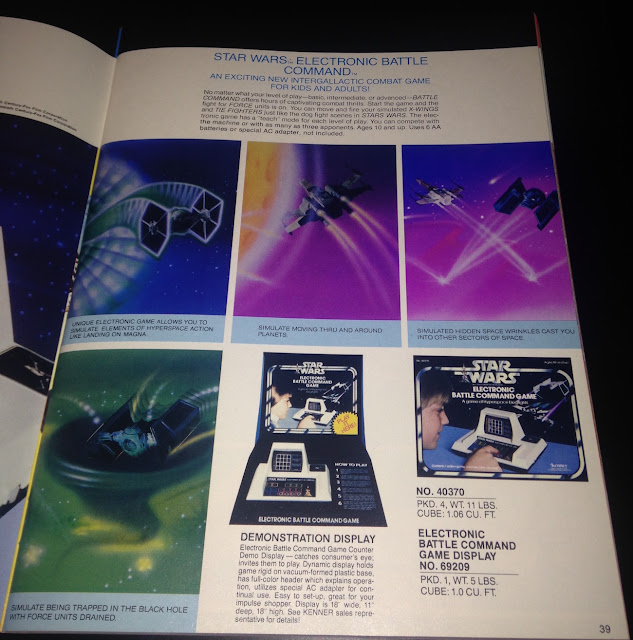 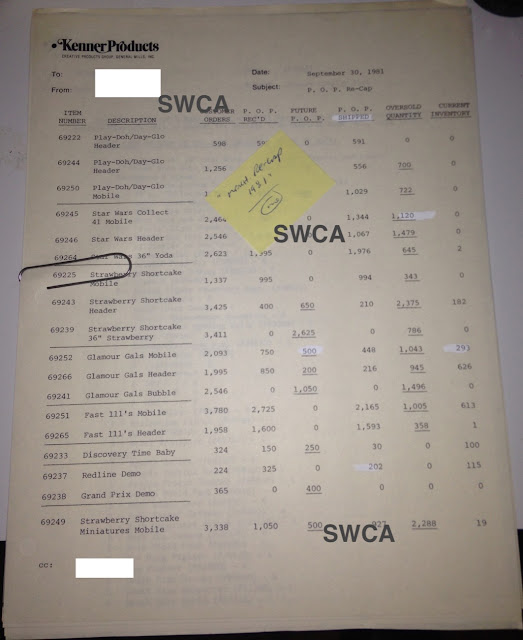 We now skip ahead to late 1981, the first full year in which toys based on The Empire Strikes Back graced store shelves.

Kenner's POP output had shrunk quite a bit by this time. Not including shelf-talkers, only three Star Wars-themed displays were released by the company. 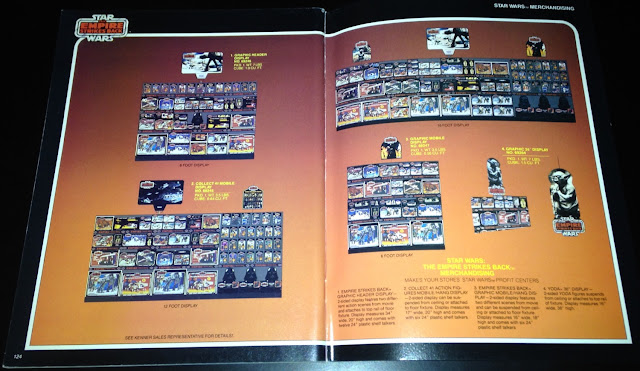 The "Merchandising" pages from the 1981 Toy Fair catalog show the displays referenced in the re-cap.
By the way, the "Graphic Mobile/Hang Display," though featured in the catalog, was never produced -- which explains why it isn't mentioned on the re-cap.

Now that we've gotten that out of the way we can talk numbers.

Combining the stand-alone action-figure pieces with their counterparts packaged with wire merchandisers, I get the following:

* You'll see that a number of the Fett displays are noted as being "scrapped for metal." To be honest, I'm not sure what that means. As these words appear beside the stand-alone displays as opposed to the ones that came with wire merchandisers, it must refer to the former group -- meaning there wasn't much metal to scrap. It may mean that a number of the stand-alone pieces originated with merchandiser packages, but were pulled out and issued independently when the merchandisers proved to be poor sellers. In that event, the racks used in the merchandisers may have been scrapped.

** I don't think the 0s in the shipping column mean that none of these shipped. My assumption is that, at the time the re-cap was compiled, Kenner had only just received these displays, and had not yet shipped them to stores. Of course, the 21-figure header is notoriously rare whereas its mobile counterpart is notoriously not rare.

* The post-it note obscures the numbers on my photo. However, as no quantity of these displays remained in Kenner's possession at the time of the re-cap, I think you can be confident that nearly all of the displays received by the company were shipped to retailers. As appears to have been the case with the vacuum-formed Yoda, it's probable that a small number of each of the displays received by Kenner were never shipped to stores, perhaps because they were damaged, retained by employees, or stored away in the Morgue.

Little documentation of Kenner production numbers has surfaced over the years. To come across such documentation relating to the company's store displays is truly special. Admit it, you're a nerdlinger for this stuff.