Limelight Interview #6B - To the 3rd Degree: Tim Eckholdt 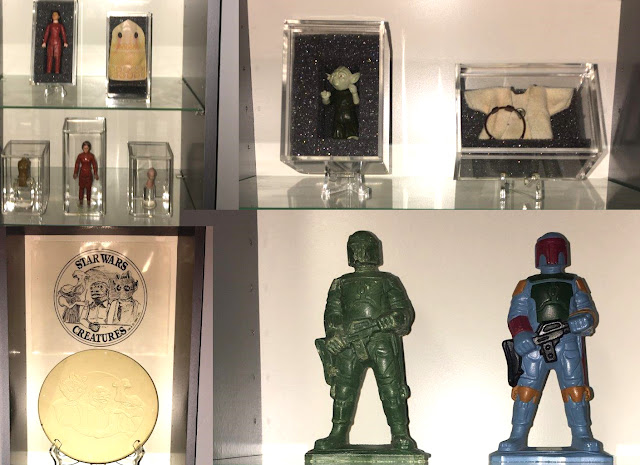 Wampa Wampa, Space Freaks! For our second round of discussion with Super Collector Tim Eckholdt, we move to items with a bit more dimension. While we focused the first Limelight of Tim’s collection on 2D items, we’re now moving over to the illustrious category of 3D vintage items. The 3D category has been the fastest growing segment of the pre-production market over the past several years, both in terms of demand and value.   Although not outpacing 2D by much, first shots, engineering pilots and hardcopies have become a major focus in the hobby due to the popularity of character focus collections. Beyond complete figures, items such as arms, heads, and torsos have all become key pieces for character focus collectors across the board.

Given both the popularity and depth of this collecting category we’re happy to bring the 2nd part of Tim’s Limelight: all things 3D pre-production in the vintage Star Wars universe. 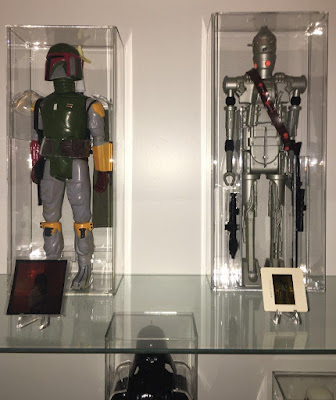 FP: When did you first start to branch out into 3D preproduction items?

TE: I branched out into 3D items and other pre-production at about the same time. I was still collecting production items at that point and it was a way to continue the journey. One of the great things about collecting is that there’s always other areas to get into and other segments to look at. It’s part of the reason people who have been in the hobby that have been at it for years like Chris G[eorgoulias] and Ron [Salvatore] that still haven’t seen everything. It motivates us and keeps us going. Plus, not everything has been found. New stuff still pops up from time to time.

FP: What’s your favorite piece (or pieces) in your 3D collection?

TE:  IG-88 12” painted hardcopy. The detail is incredible. I was never a big a fan of the “dolls.” I never had any as a kid. Even the production dolls didn’t do much for me, but I loved the packaging and the detail on the pre-production is incredible. You can see so much on it; it’s a big ass space robot...it doesn’t get much better than that. Todd originally had the figure, he was selling a lot of pre-production at the time and we went back and forth on the piece but couldn’t come to terms on a price for it. I bought all the other stuff from the lot but I didn’t get that piece; John Alvarez ended up picking it up. I eventually worked out a deal with John. Now I have the full set with the exception of the Jawa.

FP: What piece means the most to you?


TE: Luke Bespin hardcopy. It was my favorite figure as a kid and when I started to collect that was the first one I went after. Even today it’s my favorite of the figure of the line. It’s actually an unpainted carbolon. It was Bill Wills that originally owned it, but I bought it from Grant. I picked up the piece between Celebration VI and VII.  It was the one piece in the collection that I knew that I paid too much money for at the time, but I was okay with it as it was such an important piece for me.

FP: Wow that’s incredible, and since then you’ve been able to branch out into a few other key pieces for the figure. 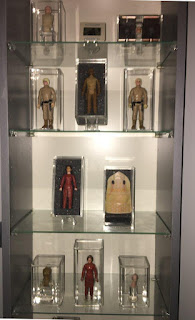 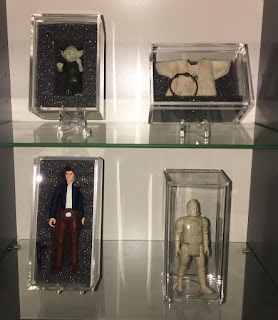 FP: What was the hardest piece to find or acquire?

TE: It’s kind of tough. Really a lot of this stuff is taking advantage of the opportunities when you’re presented with it. I didn’t dig anything out of anyone’s collection, stuff tends to show up and you make it happen. Ultimately timing is key in the hobby. The most nerve-wracking was the Han Bespin hardcopy. A lot of anxiety, because I wasn’t into the 3D stuff for that long, so I was apprehensive to jump into the fold. The first step is always the toughest. Loose to MOC jump, MOC to pre-production jump, stepping up is sometimes hard to do. 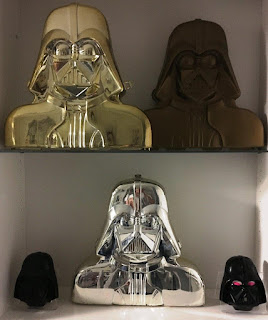 FP: I saw that you had a few of the Vader Carrying Case first shots, but one in particular stood out to me: the one that has a gold front and what appears to be a chrome back, what can you tell me about that?

TE:  I got it from the same guy as the other first shots, Jay Butler. He was buying stuff from The Earth back in the day. I think the silver was shot first, then the gold was shot secondly as an overlay as they were testing the paint. Inside is the dull gold color that is seen on other example. On the silver side it has a date of 2/1 that is hand written, and on the gold side it has a piece of tape with the date of 2/1.

Bill McBride has a similar case with no dating on it. It’s a first shot case that was then used for the test run. Amazing pieces. Of course Bill has several, but I’m always impressed when I come across one.


FP: Tell me about where the Boba Fett 4-Ups came from.

TE: The painted one came from [Tom] Derby, it’s the paint master that is in the Archive and it has the same sticker on the base - J1. The unpainted came from the Celebration VI finds. It was a nice surprise to find it.

FP: Those are great pieces, and I’m sure there are those out there that are jealous of you being able to shake those loose. 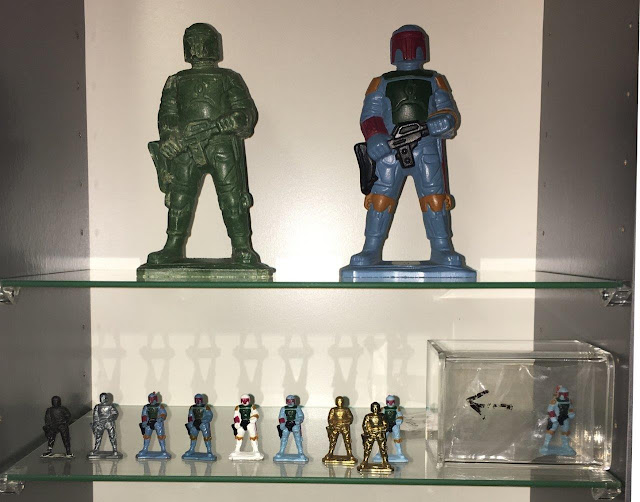 FP: One thing I noticed about your collection is a lot of Coin related items. What can you tell me about the 6-Up pre-production pieces?

TE: I initially got a pair. They were Imperial Gunner pieces. I was able to find the softcopies and hardcopies for the character. I was trading with James Gallo and through it I actually got the Yoda hardcopy as well. About two years ago I said my goal was to get a coin run, but my real hope was to get a character run from each mint [Worldwide and Osborne].

Someone was letting go of their Ben Kenobi run and I was able to pick up that character. It wasn’t even two weeks later from that deal and John Alvarez decided to let go of the Zuckuss run, so I was able to get both done in a month. Worldwide did Kenobi and Osborne did Zuckuss, and I had both sculpts. I was really lucky as only about 20% of the sculpts actually still exist from a character perspective.

Another cool grouping I was able to find were the two stages of the Creatures coin. In addition I have the Osborne dies for the coin, along with 6-up examples of the coin.

FP: Given your focus on the Cantina characters that has to be a really important piece for you.

FP: What keeps you going after all these years?

TE: Stupidity [we both laugh]. The thought that you’ll see something you haven’t seen before. The hope that you’ll be able to bring pieces that have never seen the light of day out into the light of day. Goals. Keep setting higher goals for yourself and it keeps you motivated. You can get a large percentage of the run together easily and it’s the difficulty of getting to those last few pieces, it drives you. You might know where it is and you try to let them know you’re interested. I’m not one to constantly ping someone over a piece, but I check back periodically trying to get other pieces that are really important to me. 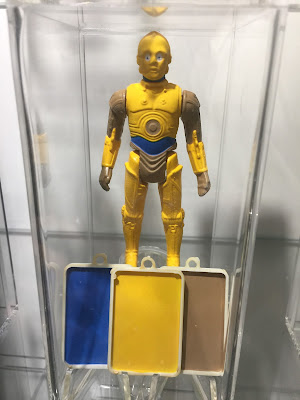 FP: What is your best memory from collecting?

TE: Celebration VI. I’d had been asked to go to several Celebrations before that and it never really seemed to worked out. I was starting to lose a little enthusiasm for the hobby. I had a few friends in the hobby at that time, but most of my time was spent talking to people over email and online. I didn’t get to meet a lot of people face to face, it was really impersonal.

Going to the event with a bunch of guys from AZ was great. Getting to meet a lot of the guys that were in the hobby for a long time and how open and inviting they were. I started to realize part of the loss of energy in the hobby was due to not taking as much part in the social aspect. It changed my perspective on the hobby. I mention this one guy a lot, he had a huge collection, he sold it off, and to my knowledge he never really met anyone in the hobby and built a relationship. If you don’t partake you miss out on a big part of what collecting is all about. 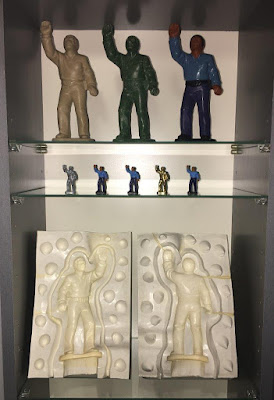 FP: What are some of your interests outside of collecting? Does your Star Wars collection spill over into any other collectibles?

TE: I started collecting comics prior to getting into Star Wars. I’ve always had a collector’s type of personality, some of us are just wired that way. I had a lot of key issues during the peak of my comic collecting, going back to Golden age stuff. I also spend time with hot rods. You got to see my roadster, and I’ve always appreciated the culture from that era.

FP: What does your significant other and family think about your collecting?

TE: My wife has always been very supportive. I was always collecting since we were together. She knows it makes me happy. She’s gone on trips with me buying collections. The friend aspect extends to her as well, she’s made a lot of friends out of it. She’ll go out with other collectors' wives even when I’m not hanging out with the other collectors. I couldn’t imagine being a collector who doesn’t have the support of their significant other. The kids are young. They have some interest in Star Wars, but they don’t really understand it.


FP: If you were a Star Wars character who would it be?

TE: Oh wow...this is one of those questions that Skye and Steve do on the podcast.

FP: No it’s a completely original question that has nothing to do with this podcast thing you talk about....

TE:  Of course, of course, I most closely relate to a Jawa. Just for the simple fact that I live in the desert and I scavenge for things.


If you ever want a more linear view of Tim’s collection be sure to visit his Rebelscum limelight page at the link below.   It’s in itself a mini archive of specific pieces from his collection and showcases the items individually rather than part of an ensemble.

Tim Eckholdt Rebelscum Limelight
Posted by Fratboy24 at 8:00 AM