From The Jazz Singer to Star Wars: Collecting the "50 Years of Talking Pictures" Postage Stamp 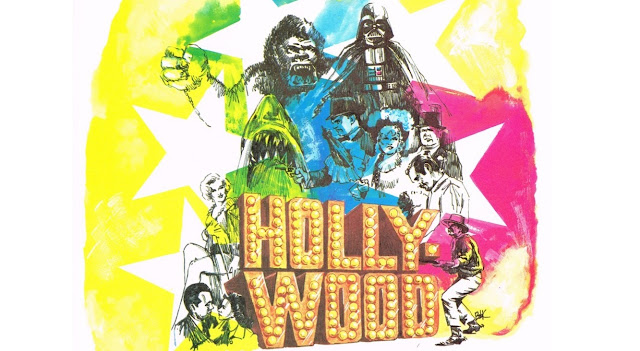 Back in the day, stamp collecting was all the rage among the sorts of grown men who now collect action figures and stuff related to Dale Earnhardt. These days, however, it's rare for people to use stamps, let alone collect them. Fortunately for the nostalgic among us, there are at least a few Star Wars items that tie into the weird old world of stamp collecting. Here's guest blogger Jonathan McElwain to discuss a few of them.

On October 6, 1977, the United States Postal Service (USPS), in conjunction with the Motion Picture Association of America (MPAA) marked the 50th Anniversary of Talking Pictures with a 13-cent commemorative postage stamp. The Jazz Singer, starring Al Jolson, premiered on October 6, 1927 and ushered in the era of feature length “Talkies.”

The First Day of Issue Ceremony was held on KTLA Stage 6, the site where The Jazz Singer was filmed. The stamp was designed by Walter Einsel. This is the Program from the Ceremony, autographed by Einsel, Ernest Borgnine, and others. 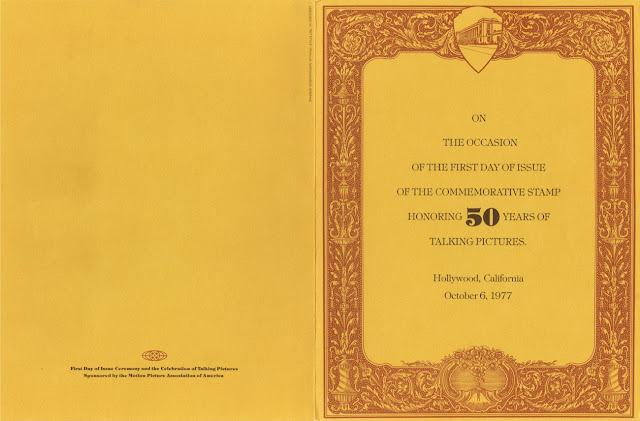 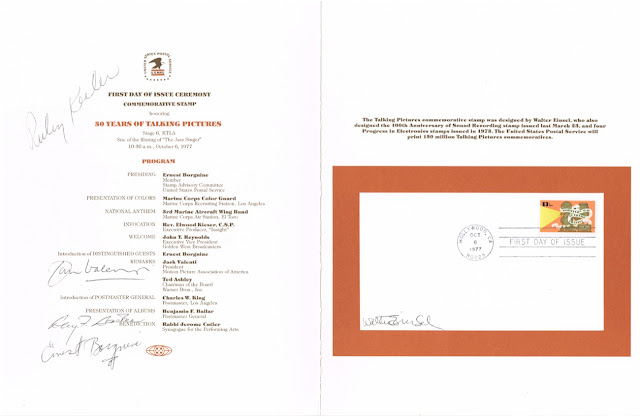 You may be wondering, what does any of this have to do with Star Wars? Well, I managed to pick up the program while at a recent gathering of Star Wars collectors in the NYC area. Does that count?

Eager to cash in on the popularity of Star Wars, a number of cachets and other postal commemoratives were produced to mark the first day of issue of the Talking Pictures stamp featuring imagery from Star Wars.

This album insert page was produced by H.E. Harris, a General Mills subsidiary, who would go on to produce the Star Wars Postage Stamp Collecting Kit in early 1978: 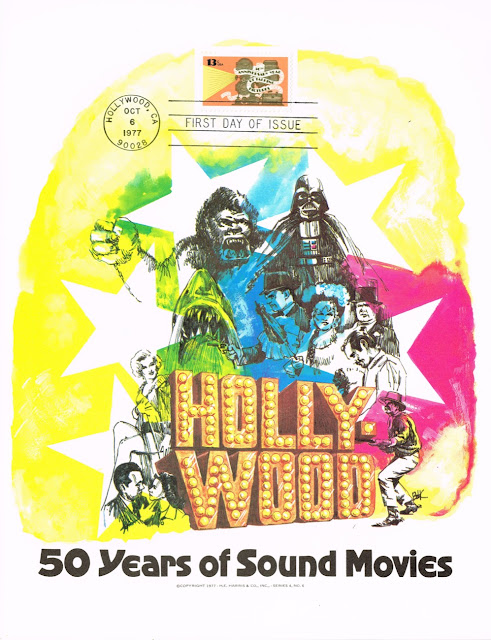 This cachet features imagery of Jolson in blackface, as well as two X-Wings and a TIE Fighter: 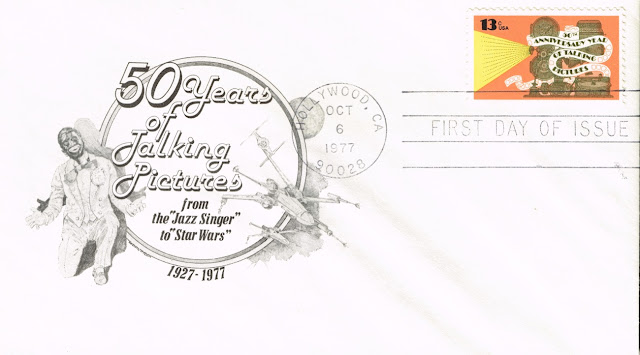 This cachet, produced by Western Heritage Association has a design which complements the stamp image, extending the projector lines toward a similar image of Jolson, with the vanishing point logo with inset Jung image of Luke & Leia below: 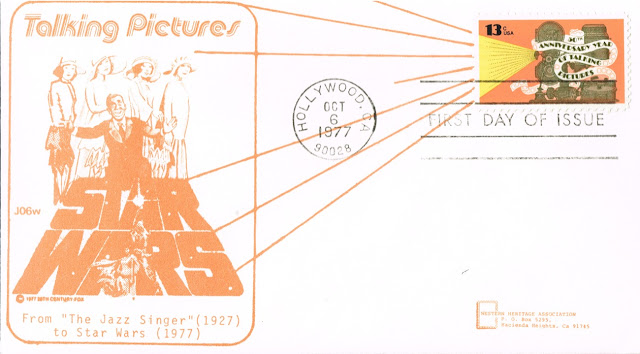 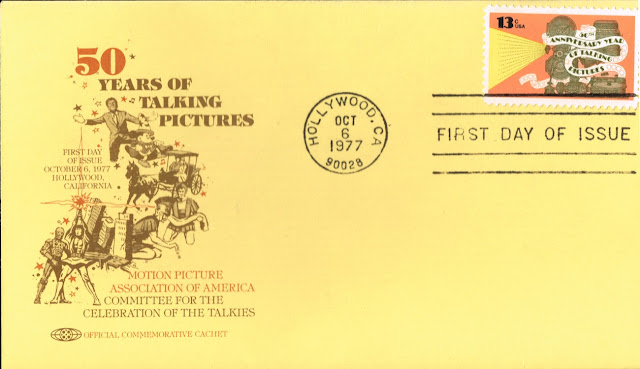 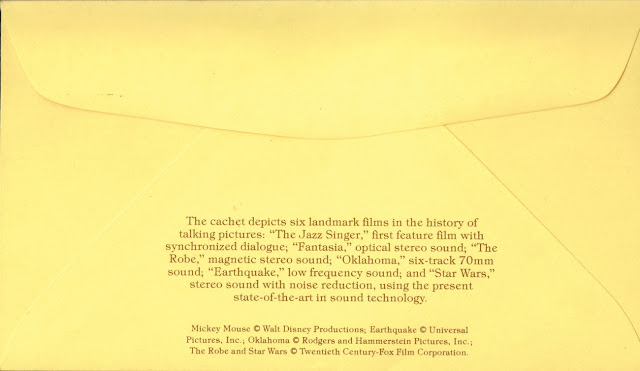 Last but not least, the Collectors Book Store from Hollywood, California produced a set of eight cachets in a matching numbered edition of 3,000. The set was divided into two subsets, with each subset of four accompanied by a black-and-white photo booklet: 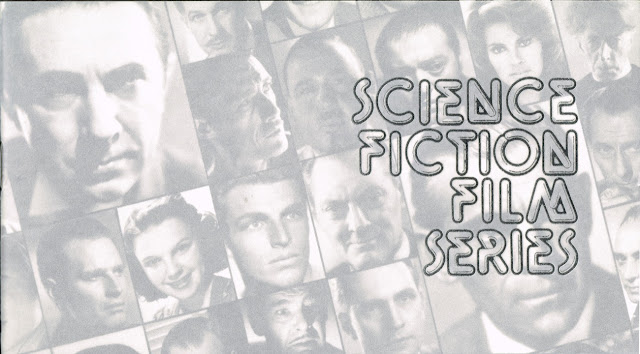 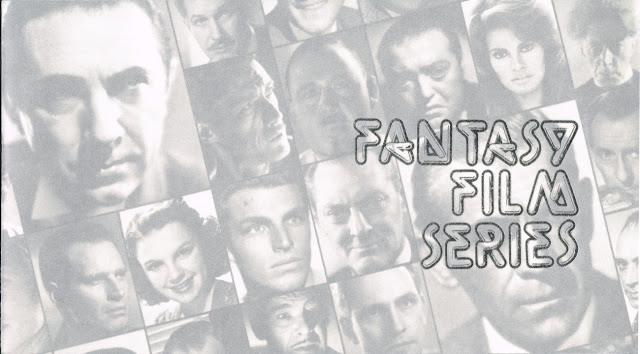 The Science Fiction Series subset of four cachets features images selected by the Academy of Science Fiction, Fantasy, and Horror Films. A color image from Star Wars is at the center of the group: 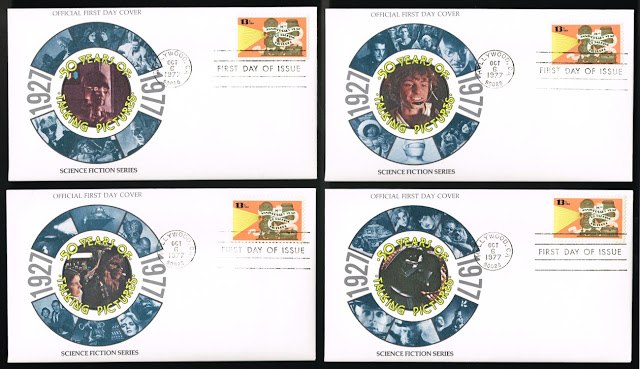 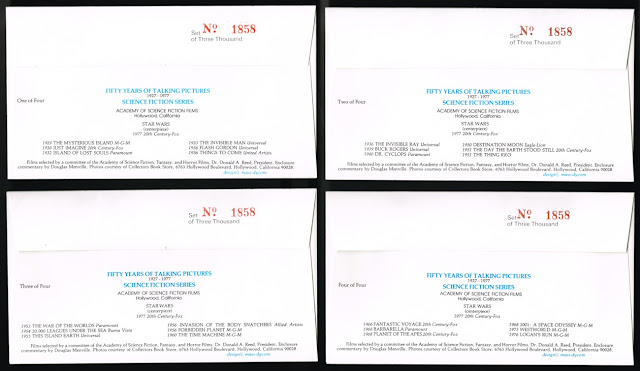 The Fantasy Series subset of four cachets features images selected by The Count Dracula Society.  The third envelope in this series features a young Christopher Lee in 1958’s Horror of Dracula: 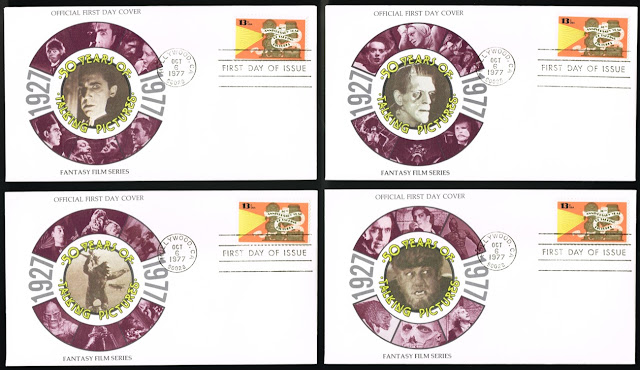 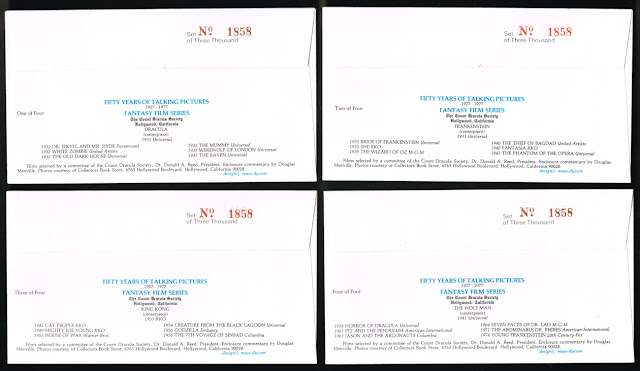 It’s quite possible that there are more Talking Pictures cachets waiting to be found in this unloved early corner of collecting.
Posted by Ron at 9:45 AM