Do Dixie Cups count as food? If you're not a goat, probably not. But that doesn't stop food collectors like Jonathan McElwain from pursuing them. Be thankful that they do pursue them, because if they didn't we wouldn't have great articles like this one to bring us up to speed on Dixie-related ephemera. So here's Jonathan to drill down into the details of Dixie's Story Cups promotion. Maybe he'll convince you to, as the stationary says, "join the forces of Dixie."

The Story Cards promotion was the second Star Wars promotion involving disposable paper Dixie Cups. The first promotion, which featured artwork on both the boxes and cups from the original Star Wars, actually coincided with the theatrical release of The Empire Strikes Back in May 1980. That first promotion was quite successful. According to marketing materials sent to vendors, sales of Dixie Cups were up by 85% during the period between May and December 1980, relative to the same time period in 1979. So, it made sense for the American Can Company to continue with ESB-themed promotions.

The full-blown Empire Strikes Back promotion would follow in June 1981. The Story Cards promotion was a warm up of sorts, which took place primarily in April and May of 1981. The promotion was featured on 3 oz. Bathroom Refill Cups, 5 oz. Kitchen Refill Cups, and 9 oz. THE Cup boxes. Unlike the various Star Wars-branded promotions, which were fully themed with artwork based on the films, this promotion ran on boxes of common Dixie Cups with a promotional snipe added to the front of the box. As far as I know, there were a total of 12 boxes included in this promotion. 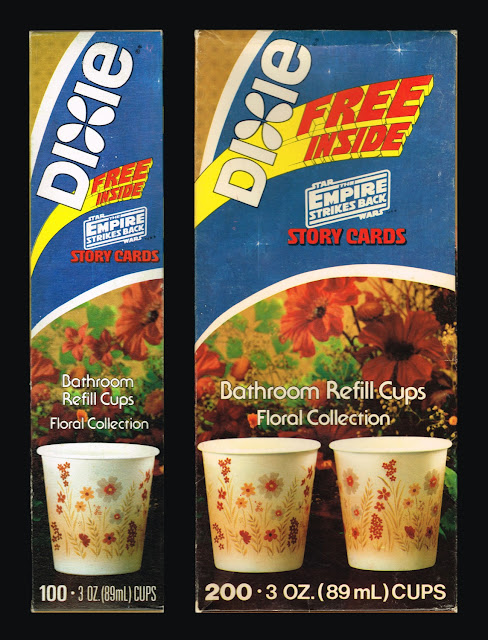 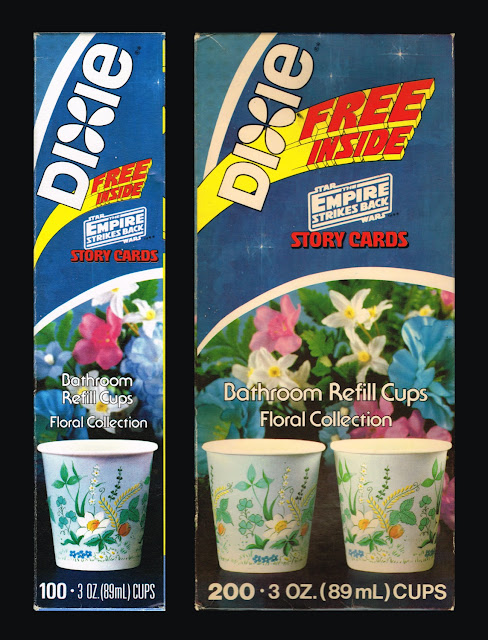 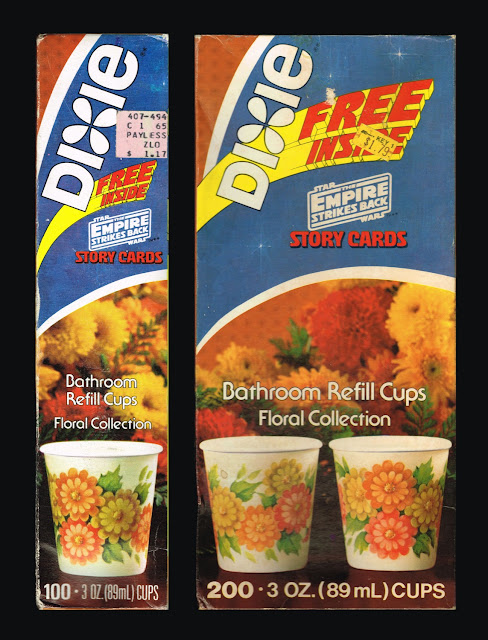 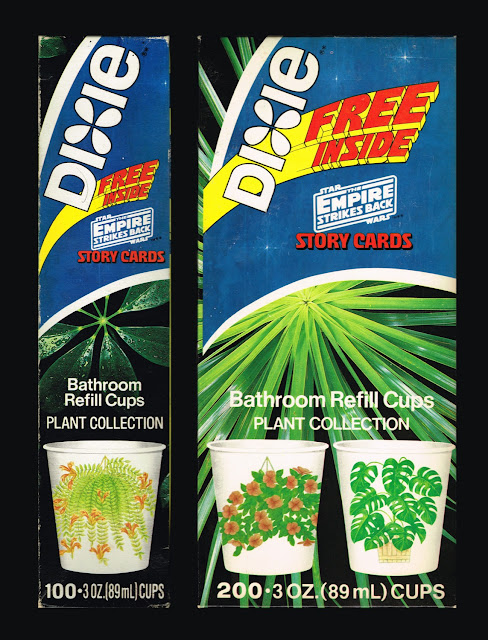 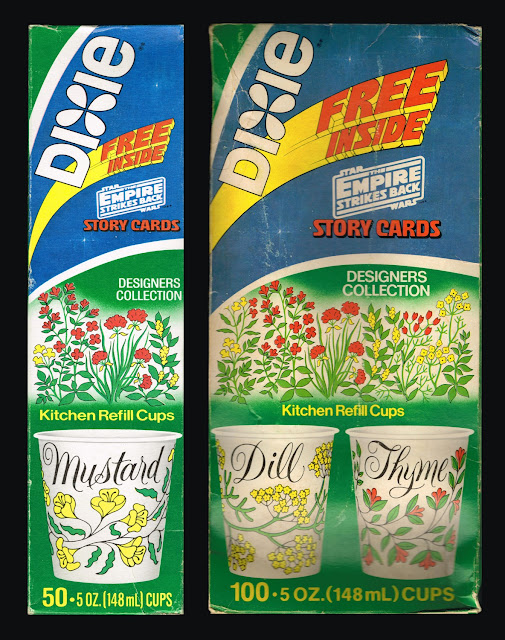 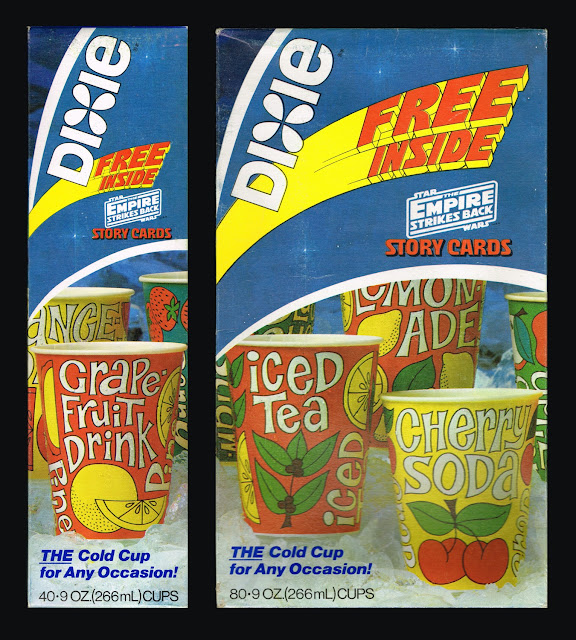 To be clear, these 12 boxes are all that I’ve been able to find in over a decade of collecting them. It is possible that there are other variations that remain undocumented. There were a few other contemporary Kitchen Refill cup designs, but none of those have been found with the Story Cards promotion on the boxes. While I would hesitate to call them rare, these Story Cards boxes are significantly more difficult to find than any of the four series of Star Wars-branded boxes, excluding their Canadian counterparts.

Each box of Dixie Cups included four Story Cards. These four “cards” were printed on a thin paper stock strip. The card strip was rolled and placed within the uppermost cup in the top of the box. It is common to find the strips with one or more cut in the card on the ends of the strip. I assume these cuts were created in the process of cutting the strips from a larger sheet.

This is the full set of all 24 cards, contained on six strips: 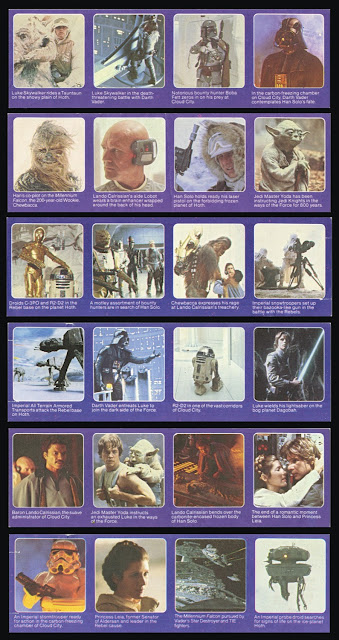 These are the backs of the same six strips: 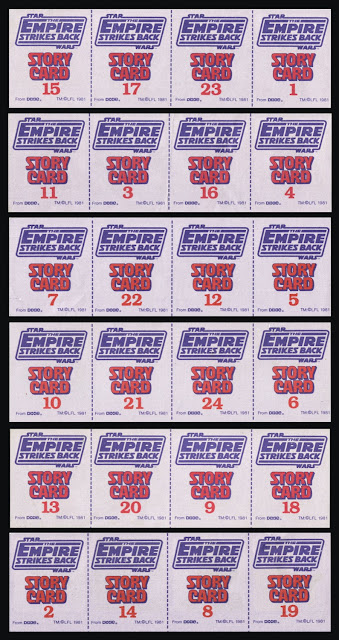 There were a lot of Story Cards printed -- 12 million of them, according to Dixie Cup promotional material! They turn up for sale pretty regularly, and there are lots of variations to pursue, if that is your sort of thing. The individual cards are always found in the same order on the strip, and you can find every card in all four positions on a strip. I’ve been slowly working on compiling a full set of 24 strips: 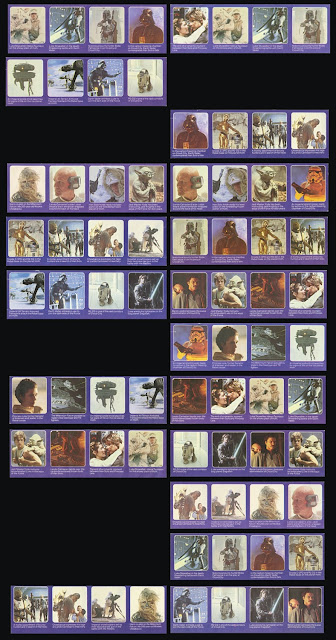 So, what are you actually supposed to do with these Story Cards, if you aren’t an OCD collector like me? Collectors of the time were able to obtain a poster from this in-store display, with purchase of one box of Dixie Cups. It was also possible to obtain the poster, along with a full set of cards, by mailing in 50 cents along with six proof-of-purchase seals.

The poster is a striking pastel montage of scenes from ESB. This is the front of the poster: 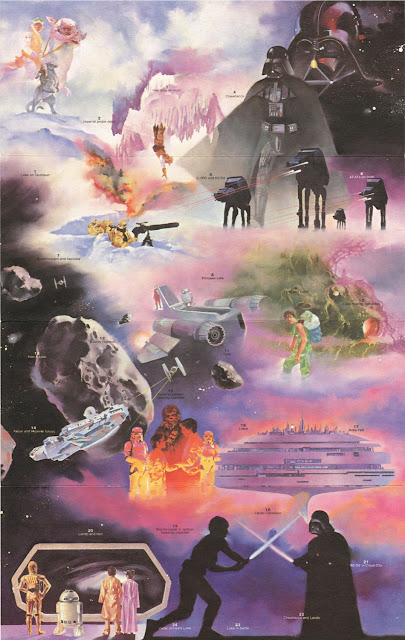 This is the reverse side of the poster: 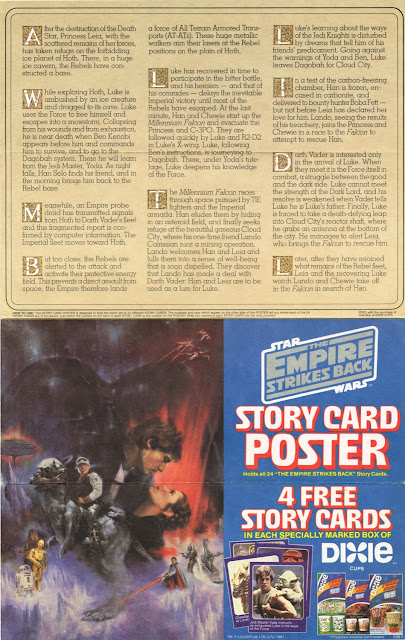 The poster has diagonal slots into which the corners of the individual cards can be placed. Once completed, the poster tells the story of The Empire Strikes Back.

This promotion was featured in an advertisement that ran in the color comics section of 30 million newspapers on Sunday, May 17, 1981: 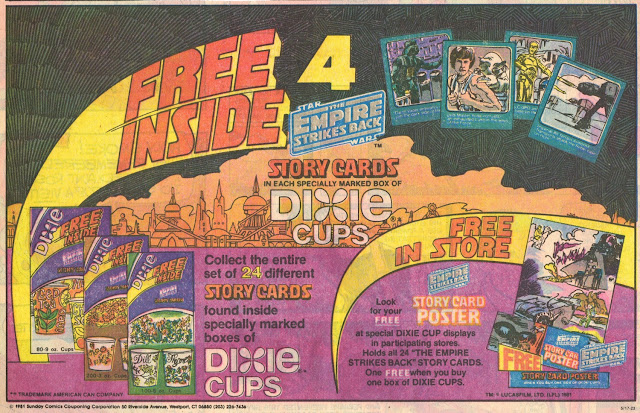 In addition to the redemption offer for the Story Cards poster and card set, the boxes advertised additional mail-in promotional offers. On the smaller boxes (which contained a single stack of cups), the advertisement wrapped from one side onto the back of the box: 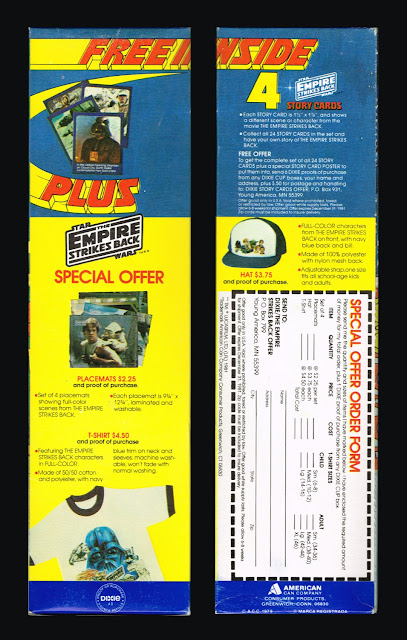 On the larger boxes (which contained two side-by-side stacks of cups), the advertisement filled the back of the box: 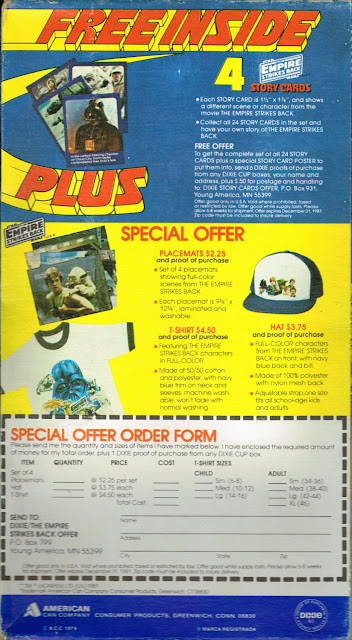 The mail-in offers included a set of 4 laminated Placemats: 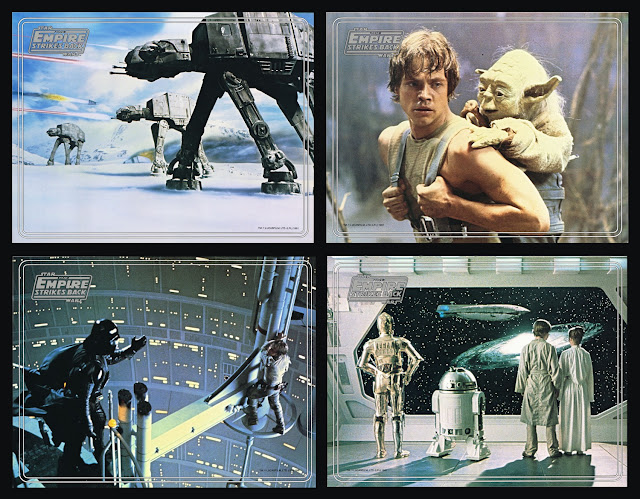 Other available items included a T-Shirt and a Hat. The T-Shirt is a collage of images that would be featured on the ESB branded Dixie Cups boxes, so it is a preview of what was to come next for the Dixie Cups line.

There are a few more things from this promotion for the completist to collect. This is Dixie Cup letterhead for the Story Cards promotion: 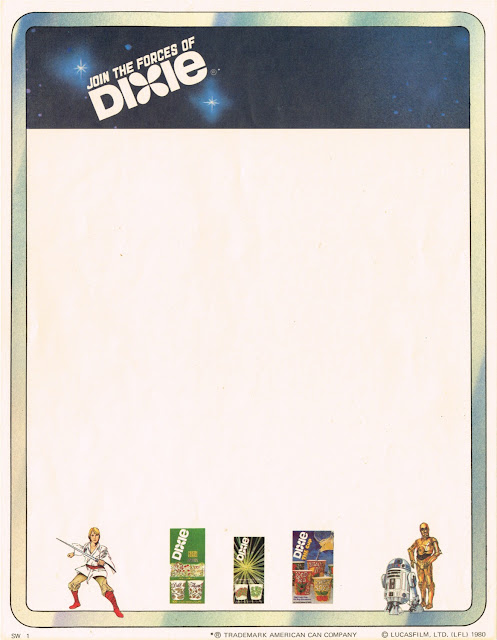 And, finally, here is one of the shipping cartons: 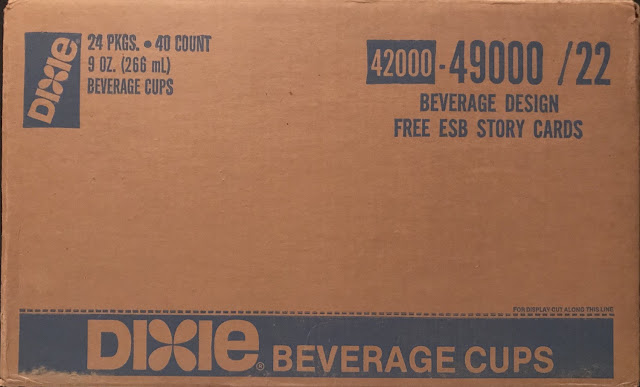 Dixie Cups are a fun area to collect.  This lesser-known promotion has a surprising amount to offer collectors. I hope to cover some of the other Dixie Cup promotions in future blog posts.
Posted by Ron at 7:30 AM