We Do it Better, or How to Make a Stormtrooper Shortage 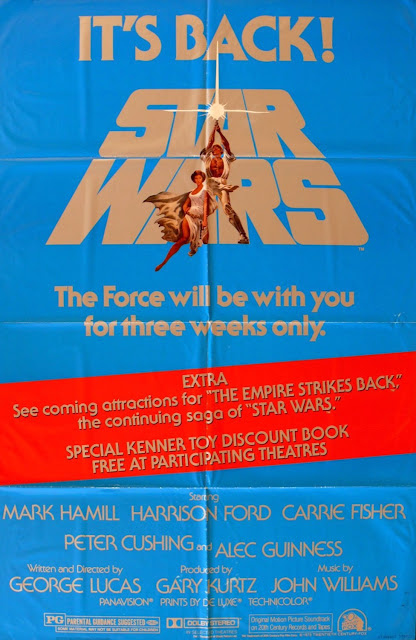 In August of 1979, Star Wars was re-released to theaters. The movie hadn't been out of public view for very long, but there were toys to sell and an upcoming sequel to promote...and, well, it was the late '70s, and it probably seemed wrong for Star Wars to not be in theaters.

It seemed especially wrong come December and the release of Star Trek: The Motion Picture.

ST:TMP was supported by a giant line of toys produced by Mego; in terms of special effects and merchandising, it was supposed to out-Star Wars Star Wars.

It didn't, of course.

Rumor has it that several Mego execs, upon seeing ST:TMP, expressed regret that they hadn't instead pursued the toy license for Kramer vs. Kramer, the year's big hit, and a film in which stuff actually happens.

Above you see the theatrical poster for the re-release of Star Wars. It's notable for the red snipe, positioned at a slight diagonal, that promotes both a preview of The Empire Strikes Back -- set for release in May of 1980 -- and a booklet providing discounts on a variety of Kenner Star Wars toys.

Is this the first movie poster to explicitly advertise a toy line?

No, it's at best the second, as Fox had previously featured 11 Kenner action figures on the poster commemorating the one-year anniversary of the release of -- you guessed it -- Star Wars.

Hmmm. It's almost as though merchandising was sort of important to the whole Star Wars thing. 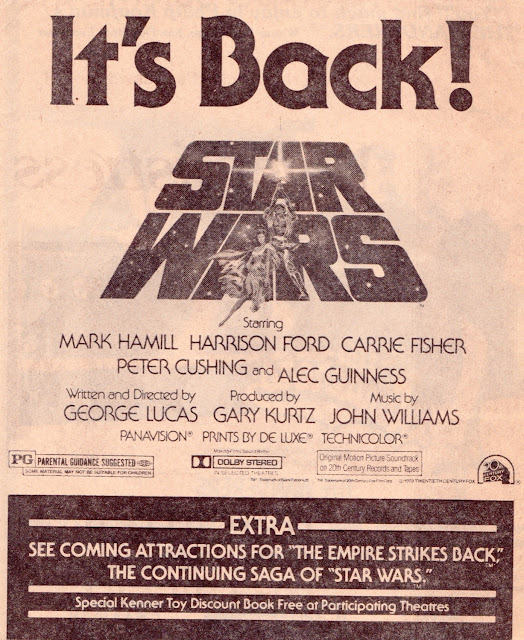 The "It's Back!" slogan also appeared in newspaper advertisements supporting the re-release. So did the snipe pimping the Empire preview and Kenner booklet -- though here the Kenner announcement was relegated to a rather small font, almost as though the toy tie-in was a little embarrassing. 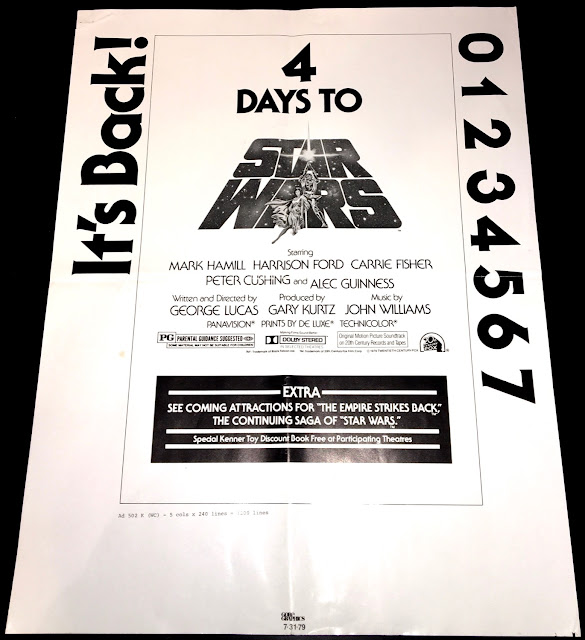 The ad was created using slicks such as the one seen above. These allowed theater proprietors to tailor ads to their localities.

This particular slick facilitated the running of "countdown" ads over a succession of days. The numbers on the right margin could be clipped and placed over the "4" at the top of the graphic -- until, finally, the exultant "It's Back!" would make its grandly corny appearance once the movie entered theaters. 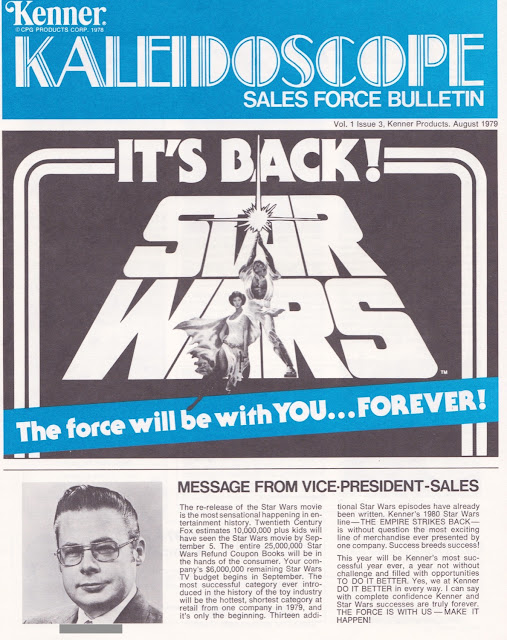 The print ads may have demoted the Kenner tie-in to a tiny font, but Kenner was taking the promotion seriously. August wasn't too far removed from Christmas, and it's no exaggeration to say that, to the toy company from Cincinnati, the re-release of Star Wars was one big toy commercial.

It's no surprise, then, that the August edition of the company's Sales Force Bulletin featured the re-release on its cover.

It also featured a message from the VP of Sales, whom I call Herman Hyperbole.

You can tell by Herman's photo that he's a confident man. And, like most men of confidence, he doesn't shy away from bold claims. Here are just a few of his claims:
Wait....13 additional episodes? Including the original, by-then-already-released episode, that's 14 episodes in total. That's more than exist today, 40-plus years later, even if you include the Clone Wars movie and the two Ewok TV things (and, frankly, let's not).

Now, I've heard nine and 12 posited as the number of episodes originally planned for the Star Wars saga, but never 14. Either Herman pulled that number out of his keister, or in preparing to write this he mainlined about a quart of the corn syrup that Kenner used to fill their Stretch Armstrong dolls. I suspect the latter, because there's no way someone can achieve that kind of vigor without at least a quart of corn syrup flowing through his veins. 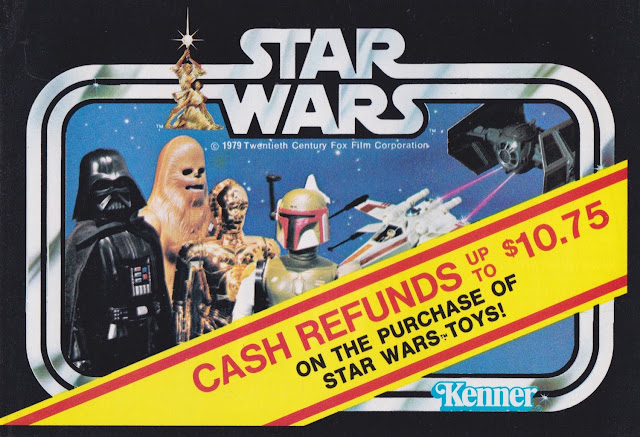 Here's the rebate booklet that was distributed at screenings of Star Wars in 1979. A lot of collectors assume it was included in toy packages, but as far as I know it was a theater-only thing.

You may have noticed that, in the above-pictured Sales Force Bulletin, Herman states that Kenner planned to distribute 25 million copies of this booklet. That's a lot of booklets, especially when you consider that the re-release of Star Wars was scheduled to run for only three weeks.

Maybe whoever printed the booklets was also mainlining corn syrup? 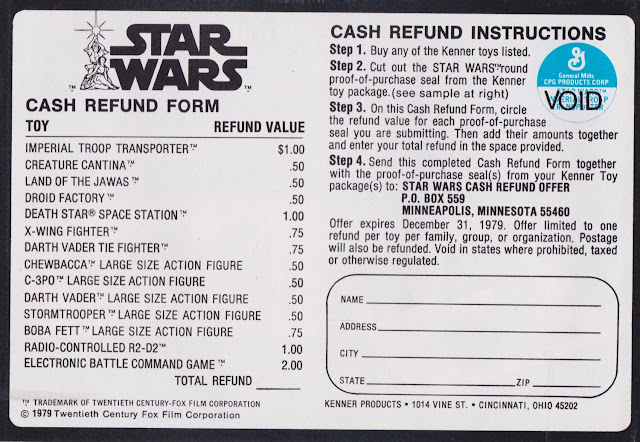 Now, Herman would probably tell you that no savings in all of recorded history was more sensational than that $1.75, not even those offered by Crazy Eddie, who was definitely mainlining corn syrup. 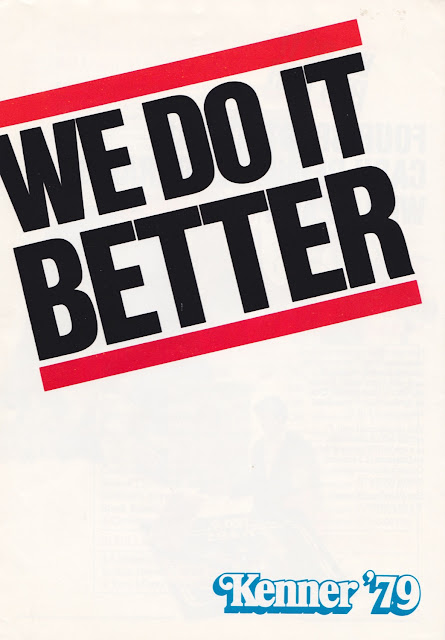 "We do it better" wasn't just a saying that Herman invented; it was an official Kenner slogan. They even issued a brochure for it.

Do you find the slogan inspiring? I don't have a strong feeling either way.

If you were to drop the "we" and replace it with "rednecks," it might make a good bumper sticker. 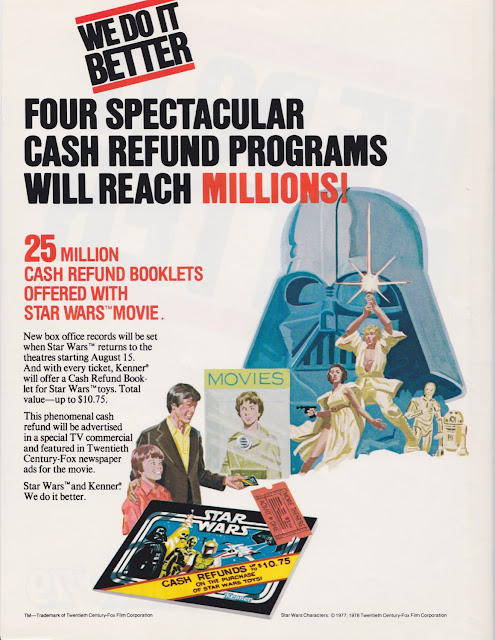 Here's the page of the brochure covering the rebate promotion. I tried to find the referenced TV spots on YouTube, but I gave up after a few minutes of clicking and sitting through ads. If you find them, please post them in the comments. 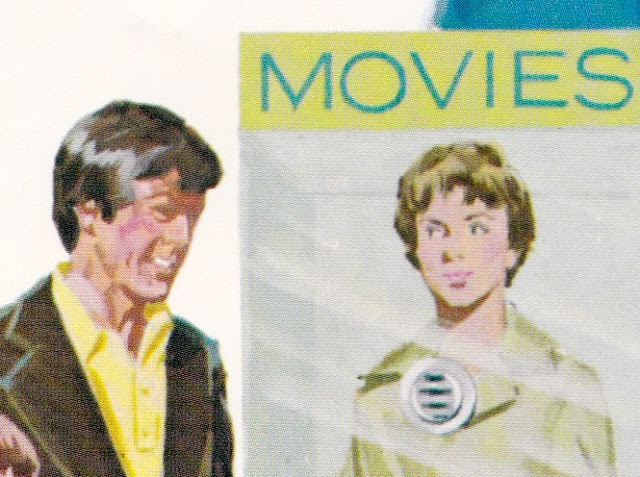 By the way, what do you reckon is going on here?

Dad, who is rather overdressed for Star Wars, seems oblivious to Box Office Lady's intense feelings of longing. Or perhaps he's doing his best to ignore them? His smile says: "You will never pierce my shell of manly self-satisfaction, TicketWitch."

The scene doesn't quite have the intensity of the final section of Bresson's Pickpocket, but it's close. 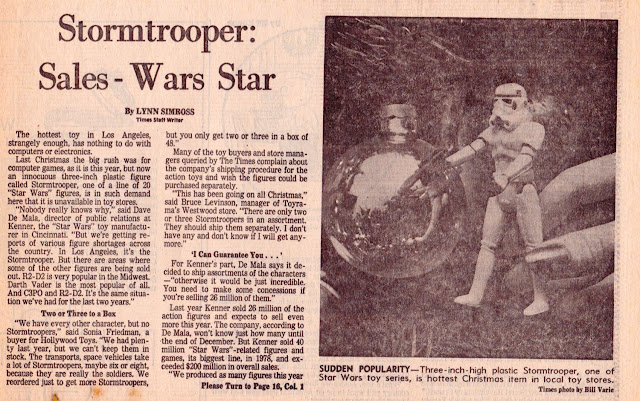 Did the re-release of Star Wars succeed in boosting Kenner toy sales?

Based on the above newspaper article from the front page of a 1979 edition of the Los Angeles Times, I'd say that it did.

The article describes a shortage of Stormtrooper figures that afflicted SoCal during the holiday season of 1979.

Despite the awkward headline (how terrible is "Stormtrooper: Sales-Wars Star"?), it's clear from the article that the the Stormtrooper shortage was no joke.

It was hard out there. Toy shoppers were hobo'ing around dusty backroads in worn-down shoes, like the Okies in The Grapes of Wrath. Toothless train bums were whittling Stormtroopers out of goat bone and selling them to sad-faced fathers standing in layaway lines.

SoCal residents: How did you survive the Great Stormtrooper Panic of '79?

I don't know about you, but I find the idea of R2-D2 being very popular in the Midwest rather funny. It makes him sound like Mitt Romney.

The 1979 re-release is mentioned on the article's second page.

De Mala, as do local toy store representatives, gives some credit for the popularity of Star Wars games and toys to the fact that the movie, which originally came out in 1977, was re-released by 20th Century-Fox in August, creating new interest in the toy items.

So there you go: A marketing triumph!

Also mentioned: A weird conspiracy theory, apparently held by some in South Carolina, which blamed a fire at one of Kenner's factories for limiting the availability of Star Wars action figures.

Kenner spokesman Dave De Mala denied the rumor, but I suspect he was hiding something, and that the Great Stormtrooper Panic of '79 was an inside job designed to encourage newspaper editors to write articles about how the folks at Kenner simply DO IT BETTER.