So, Just What is a Protomold?

Recurring guest blogger Ben Sheehan is here to shed some light on the intricacies of protomolds -- a desirable yet often understood vintage action figure prototype stage.

If you want to see what a confused vintage Star Wars prototype collector looks like, you couldn't do much worse than to ask one to explain exactly what a protomolded action figure is. Better yet, ask them to explain why a protomold even exists.

Chances are, that at some point during the conversation, they’ll wind up stumped.

To be fair, confusion surrounding protomolds has a long and reasonably rich history. From the time they were dubbed “Internal First Shots” by collectors back in the 1990s, or even sold as regular action figures or hardcopies by Kenner employees, they’ve been a touchstone for head scratching in the vintage community (I found this out the hard way in 2000, when a Kenner designer sold me Nikto and Emperor “hardcopies” that were protomolds). 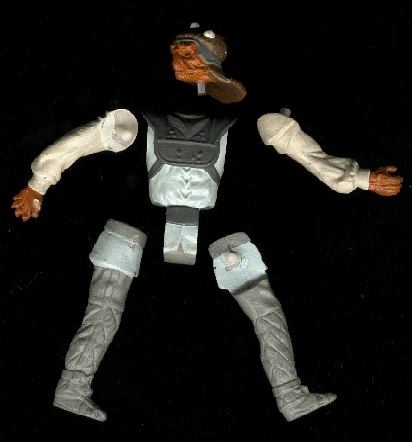 “They’re all hardcopies, it doesn’t matter what they’re made of,” lamented one Kenner designer when asked about the subject. See, even some Kenner people who worked with them aren’t able to easily define exactly what they are. 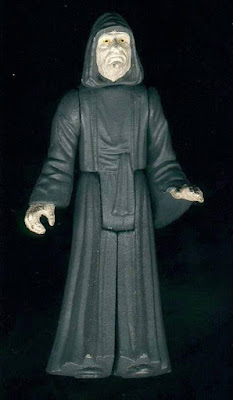 One thing has been clear: protomolds were used for marketing and sales purposes, in photography, and at presentations by Kenner from early on in the Star Wars line. Loose or carded, they have shown up fairly consistently dating back to nearly the beginning of the Star Wars toy era. How early? Pretty much from the second release of Star Wars action figures in 1978.

The Rocket-firing Boba Fett seen in Kenner imagery and on some store displays (though it looks like original art) is a protomold, for example. Several of the Cantina Creatures have shown up in protomold form as well. There is one release of figures during ESB that seems to be a protomold free zone: no known examples exist for the first 11 new figures released in 1980.

By and large though, they have been discovered for every other release, right through to the end of the line in 1985. 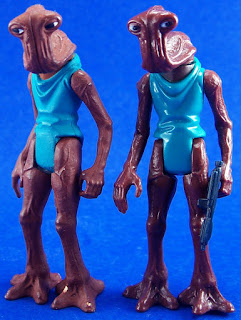 So what are they exactly -- these off-white, injection-molded prototypes, that will sometimes show up in hybrid form with unusually light resin, dynacast and carbalon torsos or heads?

Many people know the answer to that question, they’re in house, Kenner-made samples shot in low-yield (designed to have a limited lifespan) molds, under less pressure, on smaller injection molding machines.
While the molds they’re made in are often referred to as ‘aluminum,’ protomold action figures were cast, and then injection molded in Kirksite — a proprietary mix of aluminum and zinc. Only protomolded vehicles were shot from aluminium mold cavities, according to Kenner Tooling Engineers.
But why did Kenner go to all the trouble of doing this, when these same prototypes could be made early using the silicone molds that produced tooling hardcopies? Why bother with creating a set of molds, instead of just pouring and casting multiple resin pieces?

The answer to that question is time.

In the toy manufacturing process, time is money. Lots of money. It’s a relatively long and messy process to make hardcopies, particularly multiple examples. It’s not just a case of mixing up a batch of resin, pouring it into a mold, then waiting a few hours for each example to cure. Kenner’s sculpting staff, who were initially responsible for making hardcopies, almost right to the end of Empire, had a lot to do already, and by their own admission, weren’t very good (for the most part) at making them.

It often took multiple attempts to make a single example, and by the time they’d gotten around to making enough for every Kenner department that needed one, productivity had slowed to a crawl.

Tooling needed one. So did sales, marketing and packaging. The model shop needed at least one, and the molds to make their own. Then you had trade shows or presentations, international sister companies, and foreign tooling vendors who wanted them.

Really though, the only people who “needed” a hardcopy, were the tooling vendors themselves. Everyone who wasn’t cutting molds could get by with a rougher facsimile of a hardcopy (even though hardcopies were great for most any purpose they were used for).

A quickly machined and relatively soft Kirksite mold could quickly crank out a dozen or more prototype figures that were ready for use the same day. Better still, the whole process could take place inside Kenner, who had been set up for rapid prototyping well before Star Wars arrived. Better again, protomolds didn’t break easily.

And it took just one hardcopy to create Kirksite tooling for as many protomolds as Sales, Marketing, and other departments required (just to hammer the point home, only a hard resin hardcopy is suitable to produce tooling for production or prototyping -- they are unique in this respect).


So why are protomolds constructed differently sometimes?

Protomolds are fairly easy to identify. They’re hand painted (only a handful of unpainted examples have been found), with both the final production plastic color and detail added using paint or an air-brush. They don’t have peg holes in their feet (with maybe one exception), and will be a variation of the same milky white color. Often the heads will be pinned using a plastic rod molded into it, though not always. In the case of 8D8, the limbs are attached this way as well. Some ESB (TIE Pilot, Leia Hoth, Rebel Commander) and ROTJ figures have resin torsos made out of carbalon, dynacast, or lightweight resin (Black Bespin Guard and Nikto has shown up with this construction). Luke Jedi is found with an alternate dynacast hardcopy head. 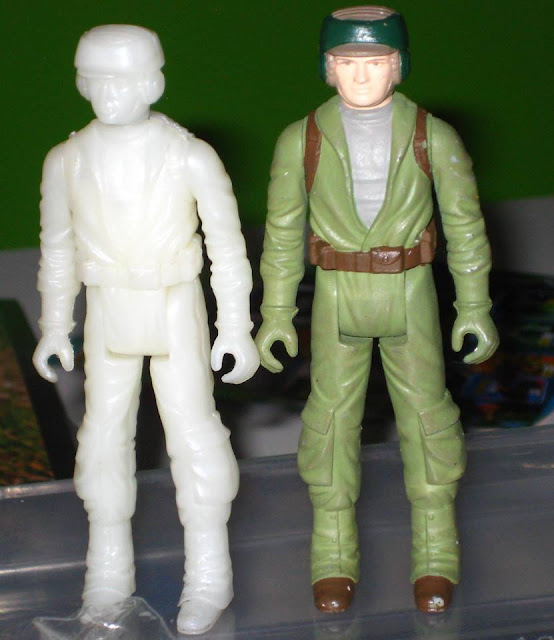 There are a variety of reasons for these differences. Most, I believe, relate to revisions done by sculpting or tooling. In some cases though, things were done in the way that would provide an end product as quickly as possible. 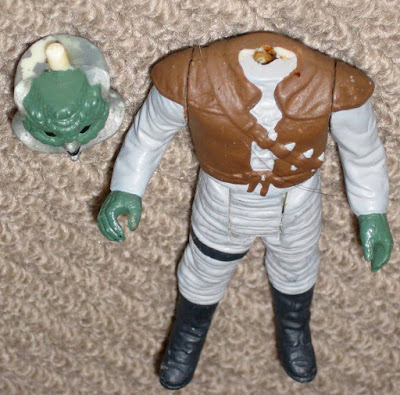 Part of the confusion about protomolds stems from the fact that a lot of figures that aren’t protomolds are claimed as such by their owners. One might argue, “my first shot action figure is different to production, and you can tell that the mold was changed prior to release. The plastic is also different to production. It’s all ABS, with no PVC. Or it’s molded in white, or another color, so I guess it’s a protomold too right?”

Sadly no, it’s not -- particularly if it’s from the "First 12" release. But then that’s a topic for another blog post.

Posted by Stephen Danley at 9:24 AM