Hello Space Freaks -- with a plethora of 3D vintage pre-production hitting the market, I thought it would be appropriate to discuss the influx of first shot figures that have come to market over the past few months.

The back half of 2019 was a period that saw the second iteration of the IC Nashville event along with the evergreen shows such as Kane County, Cincinnati, and Columbus -- all of which had record attendance this past fall. It was also a period of time where the post Celebration woes finally wore off, and the hobby was back in its normal swing of things.

This month we’re doing a special overview on first shots and their widespread availability through eBay, power brokers, and auction houses. It’s a unique opportunity to look at several types of first shots. From complete painted pieces to head and torso pulls, there has been a lot pre-production plastic on the market in the past six months.

I felt it was a good time to talk about the topic given the overall growth of this segment in the past 4 years, as it’s had an arc/growth trajectory that surpasses even the general growth trend we’ve seen with other areas of the hobby. After a bit of a tumultuous turn through the Hake’s auction earlier this fall, I felt it was also the time to discuss this segment in terms of its viability and long term value, as it’s one of the few that’s had some significant fall off in a relatively short amount of time, resetting a new norm that some other areas of the hobby haven’t seen. The biggest things to remember on first shots and their performance in the market are:

1. Production like first shots are not as desirable as they were the last 24 months, especially with characters that have high numbers in their known population (Cantina Aliens being one example). They are still commanding good prices for good condition, but loose and rough condition items have really suffered.

2     2. Unpainted and unique first shots are still appreciating in value, gaining in popularity and still seeing some growth year over year in the hobby. Where one area is contradicting, another is gaining steam.

If you’re new to the hobby or just need a refresher, here’s a quick overview:

What is a first shot?

To quote one of the Holy Trinity of the Star Wars collecting world, “First shots are among the very first plastic figures to come from the steel molds” -- this has always served as the base to the core of this question, as the true place of a first shot in the production process is the biggest point of misconception in the hobby today. They can come in many forms, painted, unpainted, partially painted, or even in an early stage with some small variances needed, including alterations to the mold. This is part of the appeal to many collectors, especially character focus collectors, as many strive to show the progression of the toy line and production process.

Unlike hardcopies, these are built with the final joints in place vs. pinned in place, in fact to the untrained eye a painted first shot figure may not look all that dissimilar from its production counterpart being produced in the same material. Thus, sometimes the lack of copyright info is the only way to identify a potential first shot figure with the naked eye.

In general, finding a first shot for your collection is an obtainable milestone for most vintage Star Wars collectors. This coupled with the reasons above have led to first shot figures gaining in popularity in the past few years, and with growth in popularity usually comes price appreciation. For the official Archive Lexicon entry on first shots click here.

First Shots by the Numbers:

Although they are among the oldest, some of the characters from Star Wars are the most plentiful of any first shots to hit the market. Looking strictly at characters, Boba Fett (roughly 100) and the Cantina Creatures (40+) represent nearly 15% of all first shots ever found (see below), explaining why we see such a large population of SW characters vs. the later lines which were more robust in character count. With SW the rarity comes in the other characters, with Death Star Droid and R5-D4 funnily being a couple of the rarest. 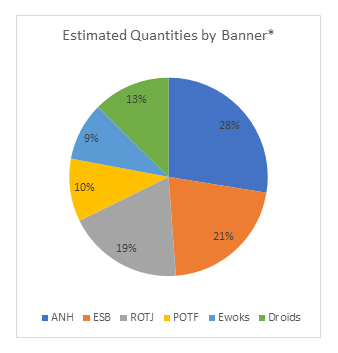 As we get into later lines, variation increases and populations become more sporadic, especially with the ESB and ROTJ releases. Turning the corner, the last 15 POTF (Paploo and Lumat are counted with ROTJ) have varying degrees. Truly the next significantly large population on a per figure basis comes from the Ewoks and Droids series, and oddly enough more so with unproduced characters than some of the production figures from the line.

As with any numbers that I post there is a margin of error. This aggregation is based on multiple sources, known examples, graded databases, and sold examples from the past several years. With that background covered and the quantities reviewed, let’s look at some of the great pieces to come to the market in the past months.

Regardless of high quantities of a few, some of the other figures in the First 21 are the most difficult to track down of any series. Characters like R5-D4 and Death Star Droid are naturally rare, but the desirability of the First 12 drives the demand up on the entire gallery of figures.

In addition to the set of four, individual examples of these figures have come up for sale through multiple channels over the latter part of the year, including Facebook and Hake’s Auction House. To keep things simple, we’ve just covered the Hake’s results below. Any other sale of the items previously mentioned sold below the following in terms of overall price.

Given that we are talking about first shots, it would be a miss not to mention the item below, a nice variant making it one of the few rare RF Fetts out there.

The First Shots that have been found for the ESB series include some of the more sought after pieces in the pantheon of preproduction items, the series expanded upon what was built in ANH, and because of that many new facets of the hobby were created in the ESB line, which has lead to some very unique pieces.

Although one of the later series, first shots from the ROTJ toy line tend to be few and far between. More common examples like the AT-ST Driver, Lando Skiff, and Admiral Ackbar are exceptions to the rule. 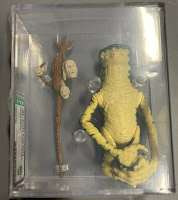 With hands getting heavy at Kenner towards the end of the Vintage era, several examples of most POTF figures have made it into the collecting market, including favorites like the Charcoal Anakin Skywalker and the below takes on the color pallets used in some of the Ewoks.

Some of the most sought after first shots in any toy line are the unproduced 2nd Series of the Droids and Ewoks figures. Great sculpting along with limited availability of some key characters have led to this being a very strong segment of the hobby. The examples that we’re seeing here are interesting as they're early unpainted examples which tend to be rarer than their finished counterparts.

So as it can be seen the market for first shots is very healthy even after some larger discoveries and an increase in availability over the past few years. There are only so many pieces out there and they remain a hot segment of the hobby. Future growth potential will depend on a lot of factors (more so with the franchise as a whole, vs. this specific segment) however that might be the category continues to see strong demand and relatively short shelf lives when paired with the appropriate pricing and audience.