Well, with a new year comes the second iteration of the Prop Store Toys, Comic Art & Collectibles Auction out of their Los Angeles office. Like last year we were treated to a full color catalog featuring a plethora of items from the Star Wars Saga, including vintage and modern, as well as cast and crew pieces. In short, they ran the gamut with the assortment that was brought to market for this event.


The layout of the catalog was augmented slightly, but still offered a range of information not just on bidding and the auctions, but the items themselves and where some of the more niche pieces fit into the bigger picture of Star Wars and movie collectibles and toys.

The presence of more items from the Howard Kazanjian collection was a nice addition to the already robust catalog. These cast and crew items mixed with the occasional toy or lunch box are an extremely important part of the Star Wars movie ethos. Howard being the producer of Return of the Jedi and working hand in hand on so many key details of the production brought another level of validation for the auction and helped separate it from many of the other large scale auctions taking place these days.

The online interface for the event was good overall. All live auctions have some delay, but this was pretty good both performance-wise and functionally. The test lot is a great idea and shows that no matter how mainstream online auctions are, auction houses still use a lot of tactics to keep people engaged, as the ringing of the bell was fun to watch.

Brandon Alinger, the proprietor of the Los Angeles office, gave a good kick off and overview and the hand off to the auctioneer was good. He brought great energy to a long day. In fact, some of the last 100 lots were some of the most interesting of the day to watch.

Enough with that though. Let’s look through a sampling of some of the cool vintage Star Wars pieces to show up in this auction.

We’re going to kick off with all things Jawa. One of the if not the most special part of this auction was the sale of the vintage Jawa collection. From the 6:1 and other coin related items to the EP and first shot, there were some special pieces. In fact there was enough to start 2-3 strong focuses just in this auction alone. Let’s look at the highlights. For ease of pulling this together I am listing everything in hammer prices, thus these prices do not include the 25% buyers premium that was added onto final hammer prices.

In the world of coins this was truly a cool experience. The ability to find all of these pieces together will never be duplicated. All of the 6:1 pieces did well, and by that I mean that even in a slightly down market, items like these were obtainable by a large chunk of collectors -- although the supply is very limited. We won’t cover all parts of the coin set, but it’s worth mentioning having a nice internal QC copy of the coin artwork with several spots of live ink/stamps was a nice touch, not discounting the die sets themselves which really rounded out the collection. In this situation we’re keeping it to the big four. 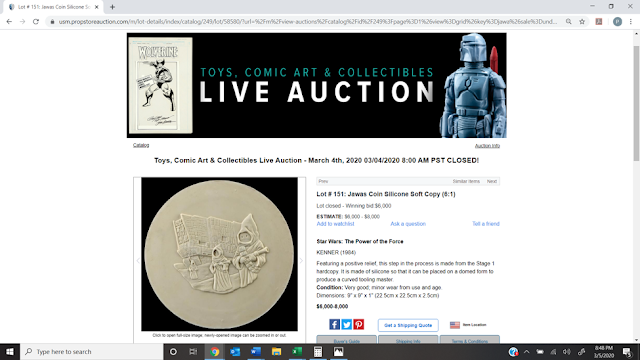 Moving past the coins we have a great variety of 2D and 3D preproduction items. The simple but rarer Land of the Jawas box flat was one of those pieces that you didn’t need in there, but just fit so well with the rest of the items. 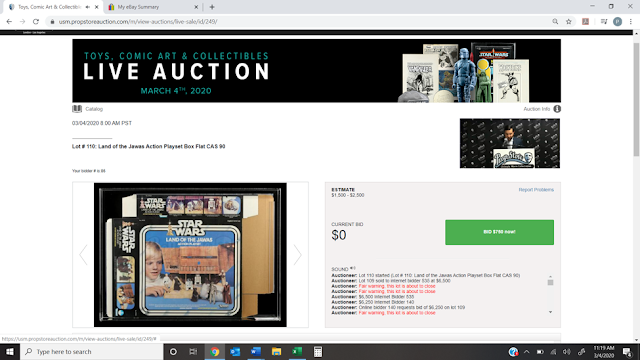 Looking at figures, there were a good selection of MOCs from around the world, but the piece that stands out the most is the Vinyl Cape Jawa Engineering Pilot. This was by far one of the most surprising pieces of the day and saw an incredible final price.

In addition to just Jawas, we got a great selection of the Jawa Limo itself: the Sandcrawler. Both the EP and artwork were incredible pieces to see, but the highlight of the whole Jawa set has to be the first shot Sandcrawler. Whether it’s the details it was lacking or the sweet blue door that it had, the first shot Sandcrawler was the king of the Jawa auctions and brought an incredible price for a unique and exceptional piece of vintage Star Wars history. 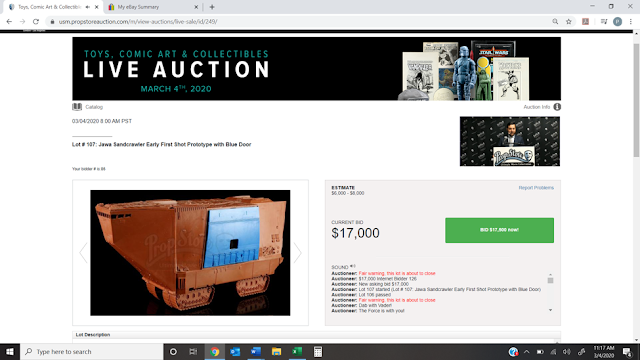 Like other auction houses such as Hakes, this round Prop Store found themselves with a Rocket Firing Boba Fett, and in all honesty it was the first “mainstream” example to come to one of these large scale auctions over the past few years. Thus, this wasn’t as much about seeing Prop Store’s presentation on the item but more about how much it was going for and how aggressive people went after it.

Comparing this piece to the Hake’s sale last November is like comparing an apple to a watermelon, but alas that’s what seems to be the mindset among a lot of collectors. There may be some price adjusting going on in the lower and middle ends, but this really bucks that trend. If anything impacted this piece negatively it was the fact that it was being sold within a week of the DOW having record losses and a potential global pandemic with the COVID-19 virus, as that’s the stuff that people that buy these pieces are looking at: the former more than the latter.

Nonetheless this was a great auction for a great piece, and appropriately ended with a price point of $75,000 ($93,750 w/BP). Not breaking the 6 figure number, but still a hell of a showing for a non-painted, non-AFA90 example of the L-Slot Rocket Fett. 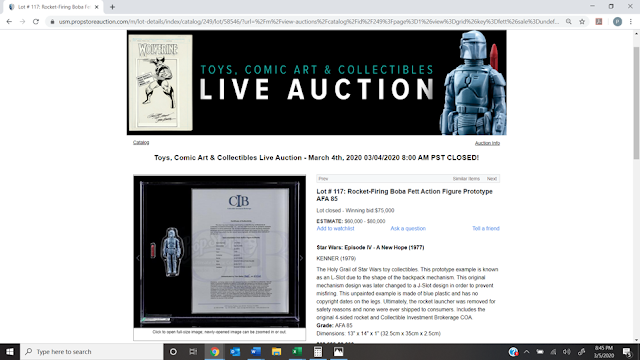 A FEW OTHER PIECES TO NOTE

There were several other noteworthy auctions and here are a few of my personal favorites. Starting out was one of the most fun to watch auctions of the day: the R2-D2 Playdoh Dynacast hardcopy.   Measuring under 2 inches tall, he was one of the smallest of the day, but with the buyers premium cracked the $1,000 mark. 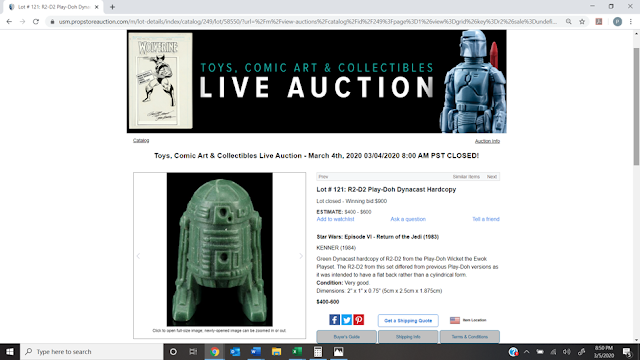 Revenge of the Jedi proofs have been all over the board the last 5 years, with Fetts pulling in $8,500 in the last 12 months. Thus it was disappointing to see an AFA90 example of Fett not move. On the flip side we saw a great example of Ben Kenobi sell for a healthy sum in this auction. 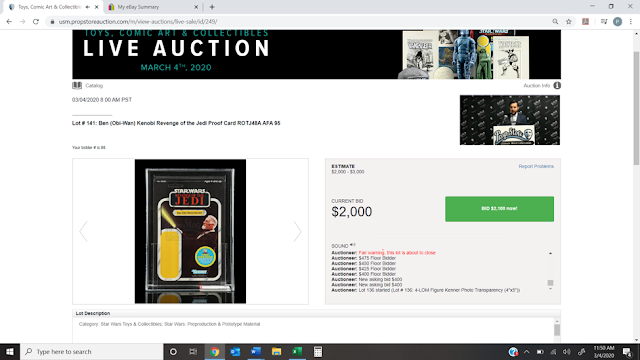 It should have its own section, but given it didn’t sell it’s hard to give it too much of the limelight, but it goes without saying that it was very cool to see the 12” Lando come up for auction. Falling short of its reserve like many auctions of the day, this was a special piece and just didn’t have the right buyer this day. 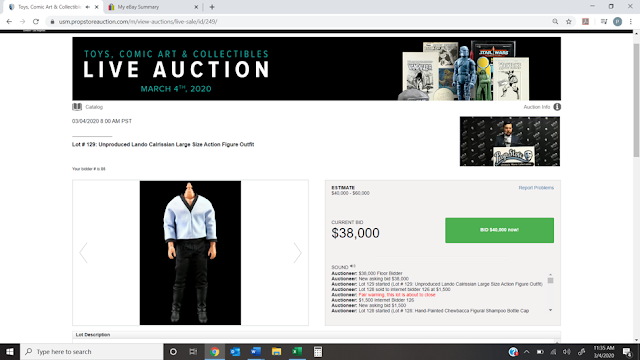 For the full review on prices realized visit their site.

With another successful auction in the books, this hopefully cements this as an annual or even better bi-annual event for the Los Angeles location.