The Force is With Harris: The Star Wars Collecting Kit of 1978 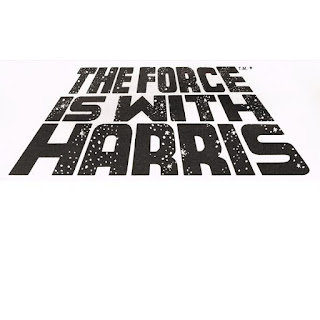 Ron writes:
Do people still collect stamps? Do people still use stamps?
When I was a kid, probably around 1981, my father took me to a store where a dusty-looking gentlemen sold stamps and coins. Here I was told that stamps had value, because people collected them. But the store seemed pretty desolate; I didn't see many collectors in it. Frankly, I was suspicious. My father, though, owned something faintly resembling a stamp collection; therefore, he was inclined to believe in the stamps-have-value mythos.
(Mind you, I'm not poking fun at my father or stamp collectors. Who am I to judge? A couple of years later I became an aspiring baseball-card tycoon, buying -- and stupidly saving -- a bunch of modern baseball cards that are today worth absolutely nothing. Honestly, I think I'd rather have the stamps.)
I don't know much about the collectible-stamps market, but I suspect that these days the portion of it that's devoted to more recent issues isn't booming. Further, I suspect that my father's stamp collection is worth less today than it was back in 1981. The people who made stamps a hot collectible have passed away or grown very old, and younger people just don't care about postage collecting. Hobbies are basically trends expressed in material terms, and like trends they thrive and wither in ways that are fairly predictable.
Fortunately, Star Wars crap is insulated from this natural and inevitable cycle. It's guaranteed to be worth a fortune even after the folks who grew up with Star Wars are old and investing in cemetery plots rather than 12-backs.
It's true, I promise.
On that positive note, I happily hand this off to regular contributor Jonathan McElwain, whose predictably excellent piece on the Star Wars Postage Stamp Collecting Kit really made me think about the funny ways in which the collecting trends of succeeding generations overlap and bump up against one another.
Jonathan writes:

The Force is with Harris? Harris who?

By the 1970’s, H.E. Harris & Company, Inc. of Boston, Massachusetts was a dominant force in the world of stamp collecting. Much of their business was based on the “approvals” model, where the company made an introductory offering for a low price on the condition that the consumer agree to receive future offerings, which they could either keep (and pay for), or return. This is the same gimmick that Columbia House used to sell many of you 11 (no, 12!) albums for only a penny. 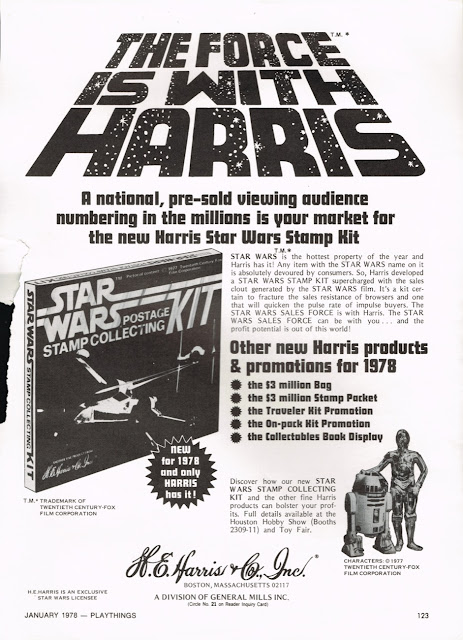 Harris was absorbed into the General Mills conglomerate in 1975. As part of General Mills, they were able to get a piece of the Star Wars action. This advertisement from the January 1978 Playthings trade magazine announced the Star Wars Postage Stamp Collecting Kit as a new product for 1978. The advert boasts: “The STAR WARS SALES FORCE is with Harris. The STAR WARS SALES FORCE can be with you...and the profit potential is out of this world!”

How could any self-respecting retailer NOT stock this product?

The Star Wars Stamp Collecting Kit included a stamp album, 24 Star Wars seals, 35 space-themed postage stamps from around the world, 300 stamp hinges (used to mount the stamps in the album) and a plastic magnifier. You can find a nice breakdown of the kit contents in this Fantha Tracks blog post  by Richard Hutchinson.

The kit was available for purchase in several different formats. The boxed versions retailed for $4.95. 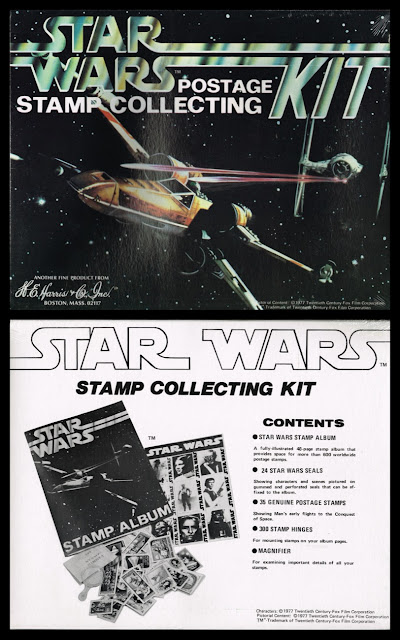 This version of the boxed kit, with black-and-white photos and text on the back side, was presumably the first version offered. The image of the Star Wars seals on the box back is different (and a bit cruder) than the final product. 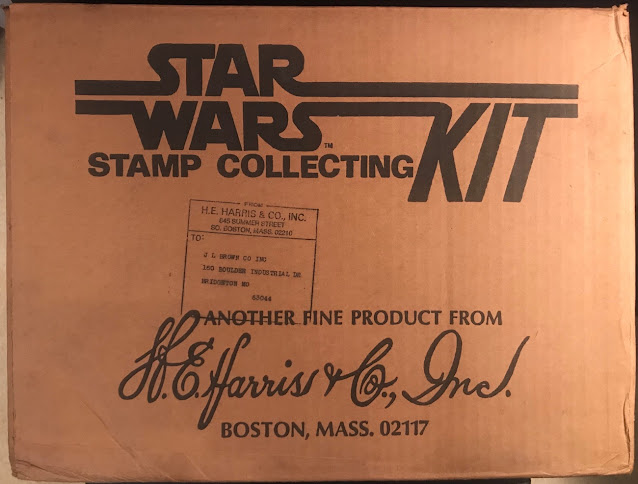 This shipping carton contained two dozen of the boxed kits with black-and-white backs. 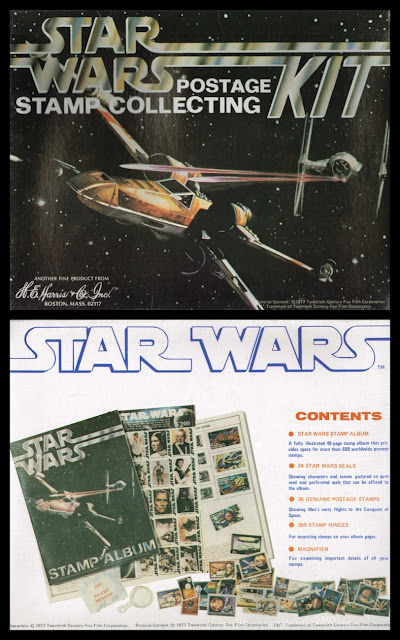 This version of the boxed kit, with color photos and text on the back side, features an updated image of the Star Wars seals in their production form. The contents of the kit remain the same, but the box back layout is a definite improvement over the black-and-white version. 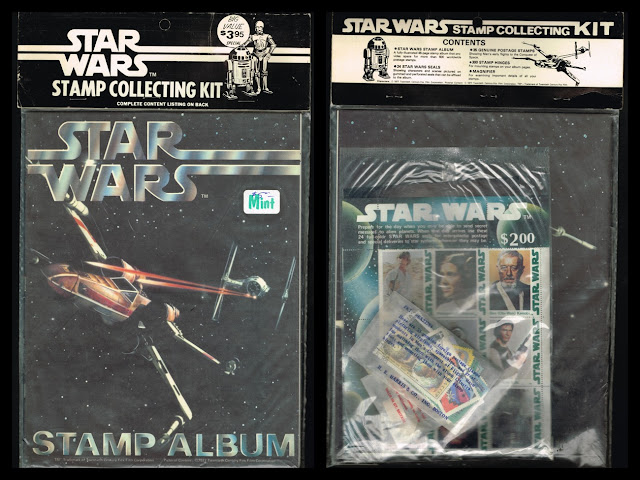 The kit was also available in this bagged format, with a lower retail price of $3.95. I find it a bit odd that the Harris name isn’t featured on the header card, although it is visible on the package of cancelled postage stamps within the bag. 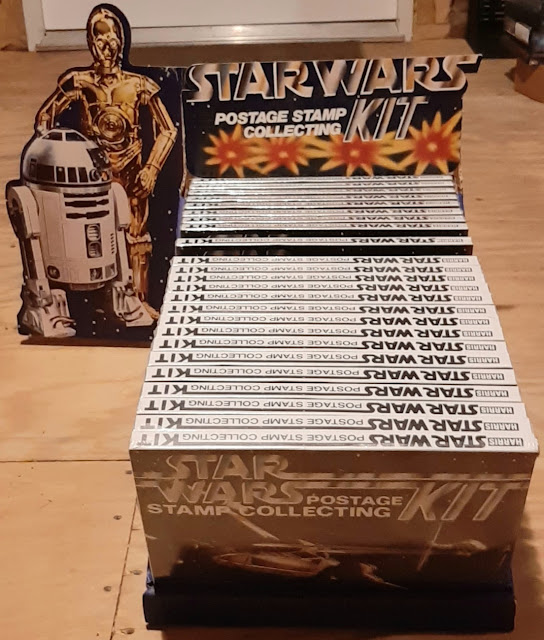 This awesome store display is from the collection of Ian Regan. It's filled with two dozen of the boxed kits with black-and-white backs. 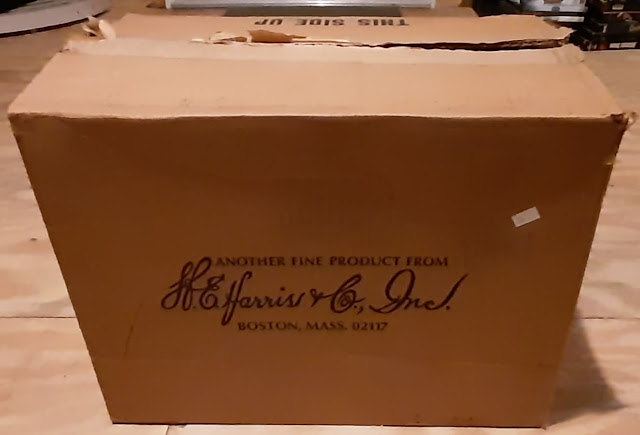 This is the shipper for the store display, also from the collection of Ian Regan.

This is the set of 24 Star Wars seals that were included in all of the kits. Although perforated and backed with adhesive, these seals were not official postage stamps. The sheet is pre-printed with a price of $2.00.  I’m not aware of evidence that the sheet was sold individually. My guess is that this was just a way to add perceived value. 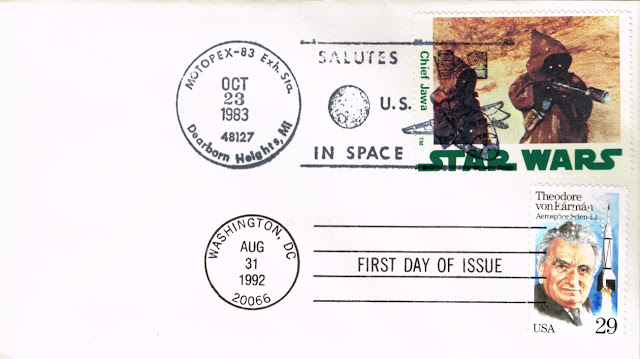 This cachet uses the Chief Jawa seal. It’s a one-off, or possibly one of a handful, made by philatelic cover artist Hideaki Nakano. The cancellation applied to the seal is from the 1983 Motopex, a local stamp show in the Detroit, Michigan area.

Harris released a set of six supplemental packs (Assortments 1 through 6). Each shrink-wrapped pack included six Star Wars seals that are unique to the pack, 10 cancelled space-themed postage stamps, and 300 stamp hinges. The packs were pre-printed with a $1.79 price. I believe that these were available at retail. 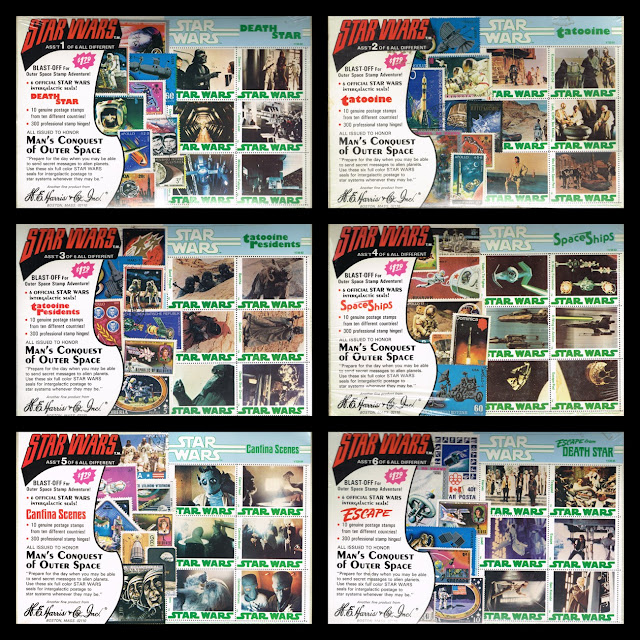 This is the full set of supplemental packs. The Star Wars logo on these packs is an unusual one. It seems to be based on a modified version of the logo used on the Style “D” Circus Poster. These supplemental packs are, in my experience, pretty challenging to track down. 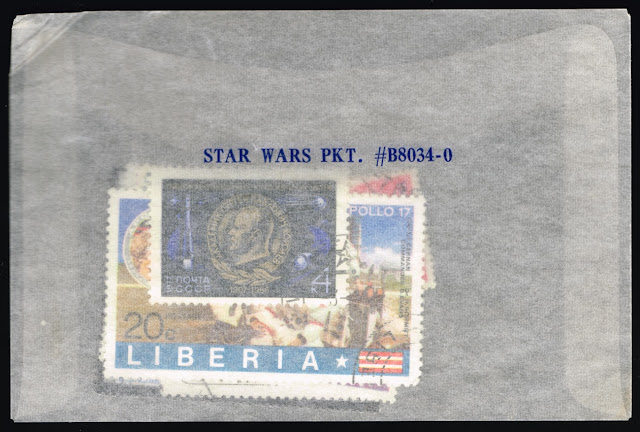 This is the glassine envelope containing the stamps for Assortment 5. The space-themed postage stamps included within the envelope match the stamps featured on the cover of the supplemental pack. I don’t have open examples of the other packs, but I expect that they are similar.

This is the set of six seal sheets from the supplemental packs. These seals are formatted consistently with the seals from the original kit, with the green Star wars logo and a caption. 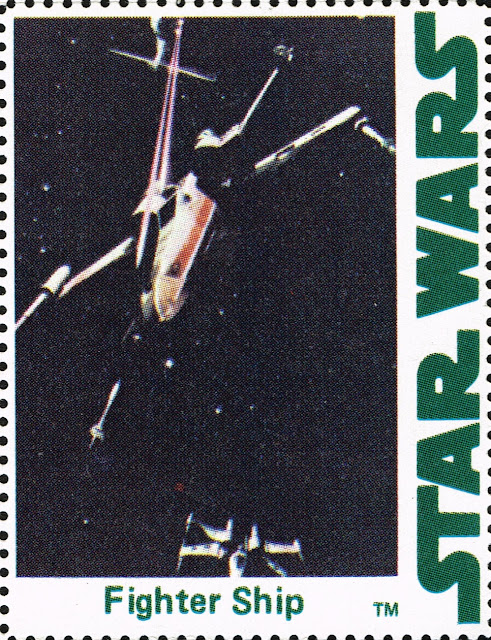 Some of the captions featured on the seals from the supplemental packs are pretty lame, as if the person writing the captions just couldn’t be bothered to figure out an appropriate name to match up with the image. 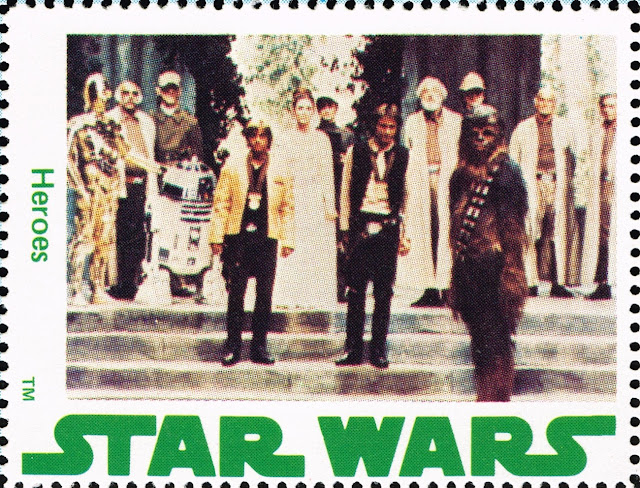 The "TM" symbols appear universally, whether they make sense or not, including on the aforementioned “Fighter Ship” seal and on this “Heroes” seal. 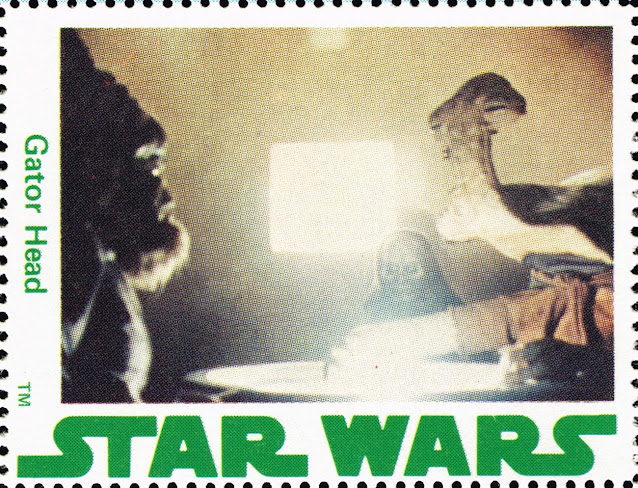 This is one of my favorites. It’s everyone’s favorite cantina patron...Gator Head!?! 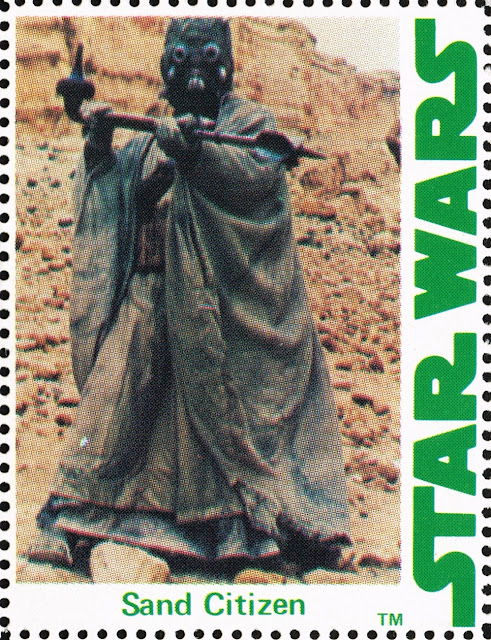 Last but not least, this seal features a poorly cropped photo of the “Sand Citizen”.

There must have been a ton of stamp kits left over after production ended. Both of the boxed variations remain readily available in sealed condition to this day. When you adjust for inflation, they still typically sell at about the same cost as the original retail. 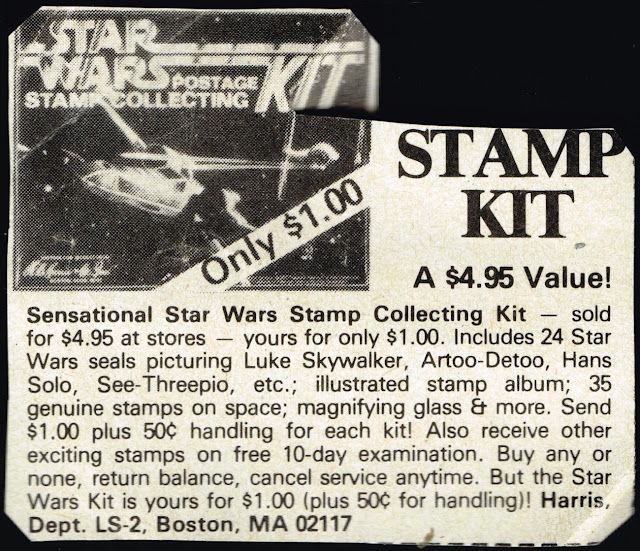 This clipping, taken from an issue of Boy’s Life Magazine, offered the Stamp Kit for only $1 plus 50 cents shipping, a substantial savings from the original retail. In order to take advantage of this offer, the consumer committed to receiving other offerings as part of the Harris approval program. 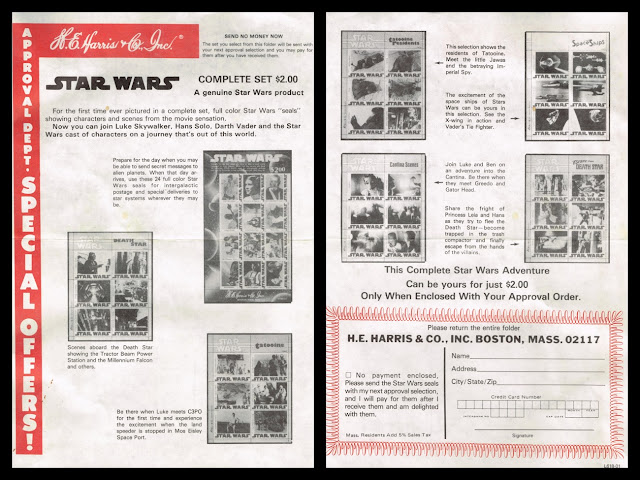 Hopefully you’ve enjoyed this look at the Star Wars Stamp Collecting Kit and related promotions. As is often the case with these things, there is more to collect from this promotion than it first appears.
Posted by Ron at 8:44 AM