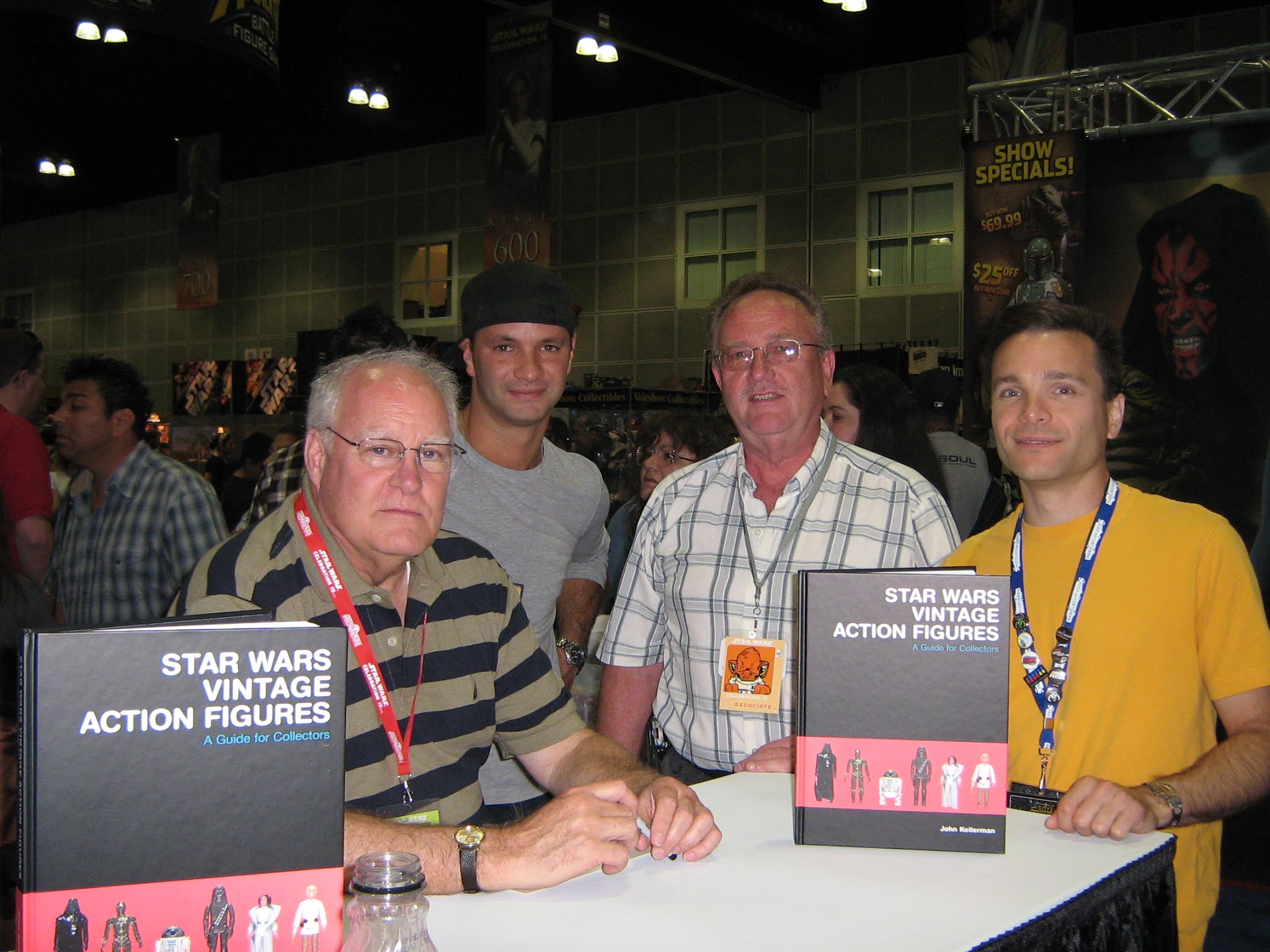 If you're a vintage Star Wars collector with any familiarity with the social media side of the hobby you probably already know that John Kellerman passed away recently at the age of 81.

I first heard of John around 1995 when a prominent East Coast toy dealer told me about a client of his who was (and he paused here for emphasis) attempting to collect every single carded figure variation in existence.

"Oh," I said, not yet realizing that I was walking into a trap, "like he wants the Stormtrooper figure on Star Wars, Empire, Jedi, and Power of the Force cardbacks?"

He smiled knowingly. He knew that's what I'd assume.

Then he continued, talking a little slower now. "No, every single variation, no matter how minor."

He paused again, wondering if I'd get it.

"I don't think so," said the dealer. "But what he's trying to do might be crazy. It's beyond even what I've described. Because if he finds a cardback variation, an offer or sticker or textual difference or whatever, he wants every single figure on that cardback variation. So he might need, say, six or seven different Luke Originals on 20-back."

To say I was dumbfounded would be an understatement. It's not that I hadn't heard of this manner of collecting, I hadn't even conceived of it.

"But...why?" I asked, my voice fading into meekness.

Some context might help to explain my reaction to the dealer's story.

People in the '90s didn't collect the way they do now. A collector of loose figures had maybe a dozen variations to hunt down: basically the ones featured in the Tomart guide. And no one paid attention to COOs or minor molding variations. If, in 1995, you told the average collector that by 2015 collectors would commonly scrutinize the tiny guns that came packaged with figures in the hopes of identifying a valuable variation, he would have told you to go on Jerry Springer and throw a chair at someone, because that's the proper forum for your level of crazy.

Similarly, the '90s collector of carded figures typically had pretty conservative goals. It was common to meet one who was attempting to acquire every figure on its debut-logo card: Luke Original on Star Wars, Lando on Empire, and so on. The really sophisticated collector might refine that a little and hunt for debut backs: Luke Original on 12-back, Lando on 31-back, etc. But it was actually much more common to meet a collector who wanted debut-logo cards, regardless of back, but without offers. The offer, whether a sticker or a printed call-out, was commonly viewed with disdain, almost like a price sticker. It was seen as marring the aesthetic appeal of the card.

But John treasured those offers. He paid attention to them, sought them out, cataloged them. He was collecting on a different wavelength. When he did publish his book (the dealer's hunch had been right), Star Wars Vintage Action Figures: A Guide for Collectors, cardbacks with offers were featured prominently, as were scores of other variations that most people had never bothered to think about, let alone collect.

I finally met John in 2004* when he and his lovely wife Annabel had me and some friends over for drinks. We were hitting Star Wars-related locations in Northern California, and the Kellermans were gracious enough to host us for a few hours. I was then in the process of buying a few things out of John's collection, and I recall discussing this with him as he gave us a tour. I also recall that the San Rafael weather that evening was gorgeous: just the kind of weather an East Coast boy associates with evenings in California.

The book had been out for a year at that point, but it wasn't exactly a fast seller. John, who'd opted to self-publish it, was a little dismayed at the pace of sales. He had pallets of the things, and he was a little worried about selling through them.

Truth be told, many in the collecting community weren't surprised that sales were a little slow. In fact, some thought that John's book was too niche to succeed with the public. It was a specialist book, and the masses are by nature generalists. That's partly why he published it himself: the pro publishers didn't get it, weren't beating down his door for the right to release it. But John persevered and did it his way, and the book was better for it. It remains the most thorough and nicely organized** book ever released covering Kenner's Star Wars action figure line.

From cover to cover the book was a reflection of John's collecting sensibility. It was rigorous and detailed, and it sweated the small stuff. It wasn't just a "guide for collectors," it was a very personal history of John's involvement with Star Wars collecting and a record of all the mental and physical energy he'd expended on it. I don't think it's a knock on the book to say that it was self-centered and a little ingrown. How could it be anything but? The best books are products of idiosyncrasy -- of their authors' unique ways of seeing their subjects. And above all Star Wars Vintage Action Figures gave us a sense of how John Kellerman saw the process of Star Wars collecting.

I have to be honest: to this day I haven't really delved into the book's most famous inclusion, the "matrices," spreadsheets charting every variation John had discovered. By the '00s I was pretty set in my collecting ways. Though I was (and remain) impressed by the information John had compiled, and was glad he'd made it accessible, I wasn't looking for a new way to collect, and I didn't run out and attempt to hunt down obscure combinations of figure and cardback. Which is another way of saying that I didn't try to (and knew I couldn't) successfully imitate John Kellerman.

But within a few years the influence of John's book was inescapable. Newer collectors, taking John's sensibility as their entry point, saw nothing unusual in homing in on minutia. Although few tried to mimic the expansiveness of John's approach (the financials of the hobby made that pretty difficult), they mimicked him in miniature, within specific figures or groups of figures. Nowadays few collect the entire carded figure line. Rather, most opt to pursue "runs" of certain figures, using John's matrices as their guide. Collecting carded figures has become less about comprehensiveness and more about specificity. The book transitioned us from the age of generalness into the age of specialization.

When, inevitably, John sold his last copy of the book, its aftermarket price shot up. It remains high today, the book having become a collectible in its own right. And despite constant pleas for an update or second edition, it's stood the test of time. People still base their collections on it.

How's that for a collecting legacy?

I began this with a dual intent: to tell a little story about the first time I heard of John Kellerman and to remember John fondly. But then I went off on a bit of a tangent.

What, you ask, is my point?

Geez, let's not reduce this to a point. Points are overrated. What's the point of nostalgia? Or the aurora borealis? Does Titian's Assunta have anything so crude as a point? How about that girl you loved in the fourth grade?

Points are oversimplifications and therefore dead ends. I'd rather focus on ideas, because they tend to expose us to complexity. And writing this has helped me to clarify three ideas:

Of course, no one will ever catch up to John Kellerman. But catching up isn't what's important. What's important is engaging with John's perspective. And maybe that engagement is the best tribute we, as collectors, can pay to him.

* Now that I think about it, I believe I first met John at one of the early Star Wars Celebrations. But the 2004 visit to his home definitely feels like the first time I got to know him on a more personal level.

** It's easy to take for granted the manner in which Star Wars Vintage Action Figures is organized. I've put together a few informational things in my time, and I know how tough it can be to lay things out with clarity and eye appeal. John's book has both in spades.