Happy June Space Freaks! Summer is here and along with it comes all types of SW related fun. Whether it’s more auctions on eBay, toy and comic shows, or having time to finally catch up on displaying your collection, this is truly the best season to be a collector.

Over the past few months we’ve had a lot of great fodder on eBay for our monthly updates. During this time a question has come up around including Facebook and Rebelscum transactions in the monthly MarketWatch. Let me be clear that I think that this is a great idea, and fully support it. However the reality is this, this article comes under a great deal of scrutiny every month, whether through the Facebook page for the Archive, direct emails to me or PMs on one of the boards I get chopped up all the time about what I included, why I included it, and in some cases the possible legitimacy of some of the items I list. A lot of this is just talk and banter that comes with the hobby. However I’ve tried to ensure that everything that I put in these posts is verifiable and indisputable when it comes to a listing ending and being sold definitively. When it comes to FB and RS posts there are some verification challenges with this. To be straight forward there’s no way for me to prove that a transaction went through other than the people’s word who were involved in it and the status on either of the sites. On eBay I have the auction webpage as a verifiable source, I can go back and look at items that are classified as sold as well. Does this mean the transaction was completed? No, but it does show that the auction ended a certain way and I can verify that beyond the shadow of a doubt.

Someday maybe we’ll be able to change this up, however for now I’m going to continue to use the source that I have, that is most representative of the general market, that being eBay.

This month we have some fun items to cover so let’s get into it.

This is a pretty fun little item. There are so many 2D prototype collectors out there that I’m surprised by the end price on this item, especially given the end price of another Ewok related item in this post. Here we have the proof sheet for the hanging tags that were attached to all of the plush Ewok toys. Now the plush items are really on the border of being included in the vintage toy line, however they were produced by Kenner and were usually found alongside the vintage action figure line at retail, which gives them just enough proximity to be included here. 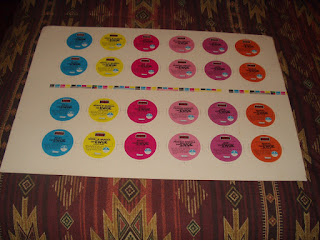 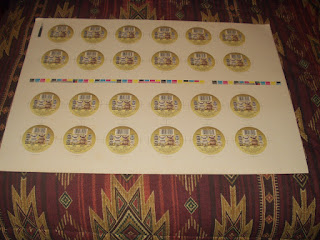 One of my favorite coins in the Power of the Force series is also one of the most expensive to find, but then again anything Fett related is high priced these days. A great example of an AFA graded coin, this particular piece was definitely above the current market with this piece going for rougly $400 consistently on eBay. However this does have the AFA90 grade to it and that does crazy things to prices on virtually any item. 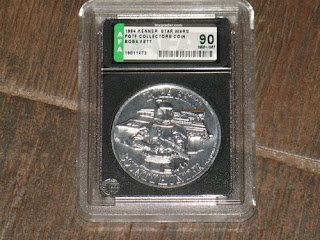 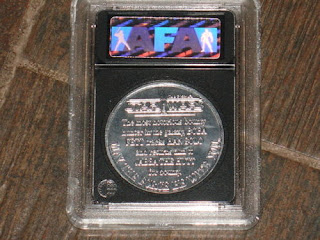 My personal favorite of this month’s update is also one of the rarest of all catalog mailers out there: a MISB ROTJ Mailer including Boba Fett, Luke X-Wing, Yoda and Darth Vader. When it comes to character value you really don’t get a more impressive foursome anywhere is the catalog mailer world. This piece in particular hasn’t come up in several years and to see one in a sealed box is pretty unique... well at least we thought, until a month later when the seller listed a second one. This isn’t that uncommon as many who have sealed mailers have a few of them for some strange reason. While most ROTJ mailer sets go for around $400-700 depending on condition and character assortment, this particular piece hit the $1,300 mark, with the second auction going for over $1,600, showcasing the pent-up demand for an item that is about as rare as they come when you talk about production pieces that weren’t in some type of unique short run situation. 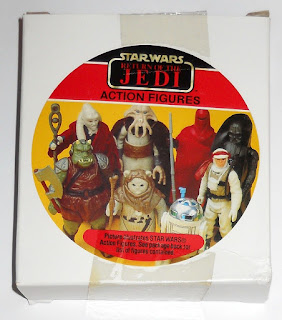 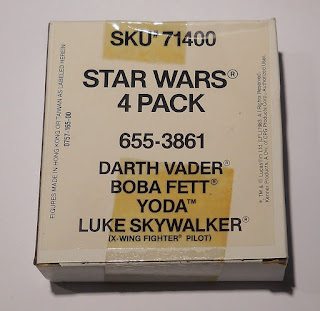 Our next item could be the rarest of this month’s update. Here we have a Cromalin for the Ewok Glider from the Return of the Jedi release. One of the few new releases for small items in the ROTJ toy line, this piece has a special place in the series. Like most large scale packaging prototype items, you get the visual of all 6 sides of the original boxed item with this. However, that creates some challenges in displaying, as it’s impossible to get a matting for this and when graded it’s extremely heavy.  Thus, a lot of people stay away from these large sheets. Given that, it was interesting to see an Ewok-oriented piece go for over $1,000 in an auction setting. The seller should be quite happy with the final price as it was well over market expectations even in the crazy market we’re seeing today. A great item and one we may not see come up again in the future. 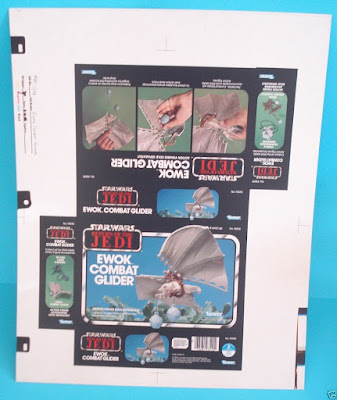 The next item is one of the most famous vehicles from the Original Trilogy and one that is sure to make an impression on a new generation with it being featured in The Force Awakens. The ROTJ version of the Falcon is my personal favorite. It has a great image and features a scene that was ultimately cut from the movie. The Falcon always brings a hefty price when it’s up on the market, regardless of what banner is featured on the box. With an AFA grading cost of over $100 on the piece it’s not hard to see one go for over $1,500, which is right on the mark for where they have been selling historically. The ROTJ run of this vehicle is the shortest of any in the vintage line, given that there were several other large scale vehicles and playsets such as the Imperial Shuttle, Ewok Village, and AT-AT that were taking up the premium retail shelf space.
ROTJ Millennium Falcon 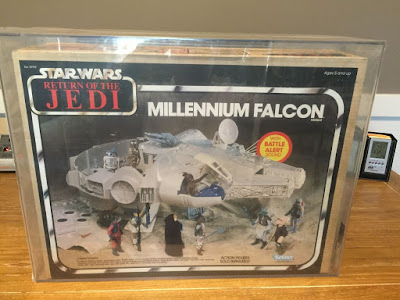 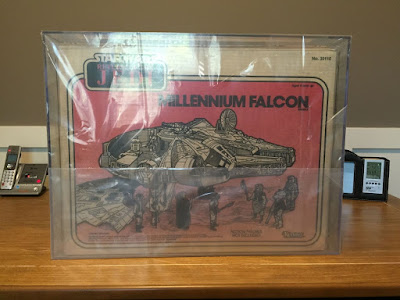 Featured several times before, it’s hard not to showcase these Six Packs when they come up on the market.   This example of the Yellow ESB Six Pack is in great condition and rounds out our listings for this month.    Much like the red counterpart, these pieces demand extremely high prices regardless of market conditions.  In this case (the less rare of the two), we saw an incredible price realized of over $4,000. Even for a piece like this that’s an incredible price, not only over historical prices, but because these tend to be a bit more niche then a lot of the mainstream items. In the past 5 years we’ve seen examples from $1,800 to $2,400 and thus a $2,000 increase over historical performance is quite impressive. 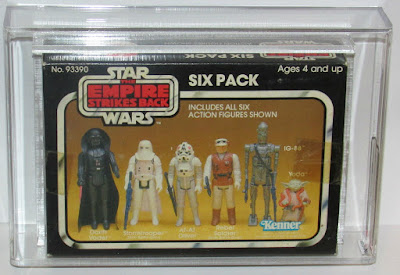 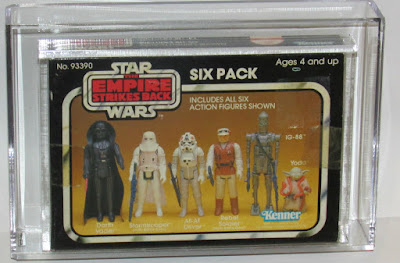 That wraps of the coverage for this month. Join us next time as I take a look at how the hot Summer season has affected prices in an already hot market.