Remember the DIY print publications known as zines? They were like the internet before the internet in that they allowed people (mostly young people) to broadcast their ideas and obsessions with minimal investment. In the early '90s you could go to hip record stores and the like and find racks of zines, each of them with a colorful xeroxed cover. I vividly remember seeing one in Boston devoted to milk cartons. I thought: "How esoteric and weird!" Little did I know that within a few years the internet would make a DIY magazine devoted to milk cartons seem positively normal. And quaint, too, since the zine had nothing to do with porn.

Around that time I ran across a zine devoted to Star Wars. I didn't buy it, but I recall getting a kick out of the title: "Report from the Star Wars Generation." I loved the concept. What was Generation X if not a generation brought up on Star Wars?

Later on, after I started collecting, I began looking for copies of that zine. I eventually found one. I thought it'd be fun to spotlight it here. 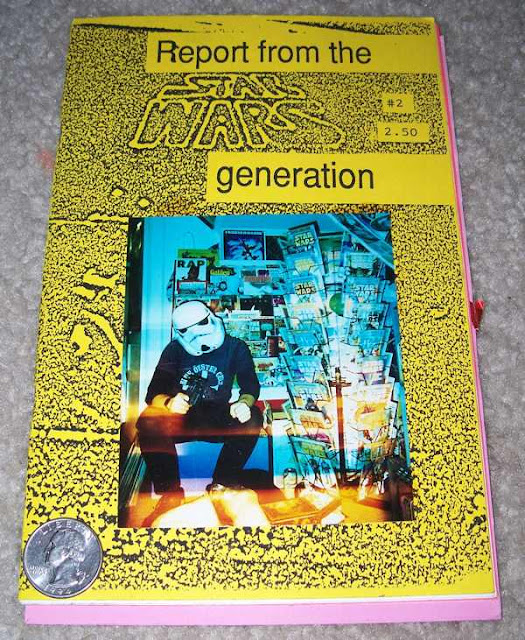 The cover is, like the covers of most zines, xeroxed in black on a piece of colored paper. But pasted over that is a color 3"x5" photograph of a guy wearing a stormtrooper helmet. Pretty swank. 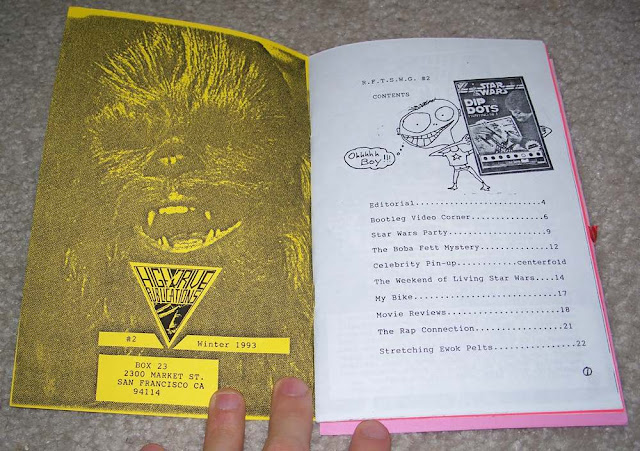 The index. As a look at the inside cover will tell you, the publication dates from early '93. 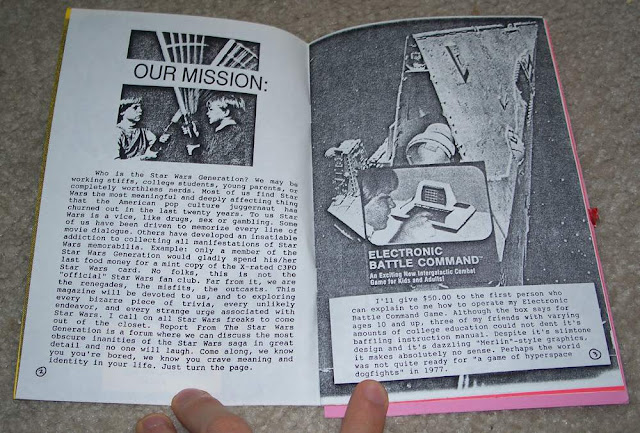 I love the mission statement, part of which reads:


No folks, this is not the "official" Star Wars fan club. Far from it, we are the renegades, the misfits, the outcasts. This magazine will be devoted to us, and to exploring every bizarre piece of trivia, every unlikely endeavor, and every strange urge associated with Star Wars. I call on all Star Wars freaks to come out of the closet.

Hey, it was a different time -- one in which Star Wars fandom was sort of underground.

Nowadays it seems you can't get Star Wars freaks to go back into the closet. Maybe if they were lured with wookiee cookies and limited-edition pogs . . .

The write-up on Kenner's baffling Electronic Battle Command game is also great. I bet he kept that $50. It's been over 20 years and the world still hasn't figured out that stupid game. 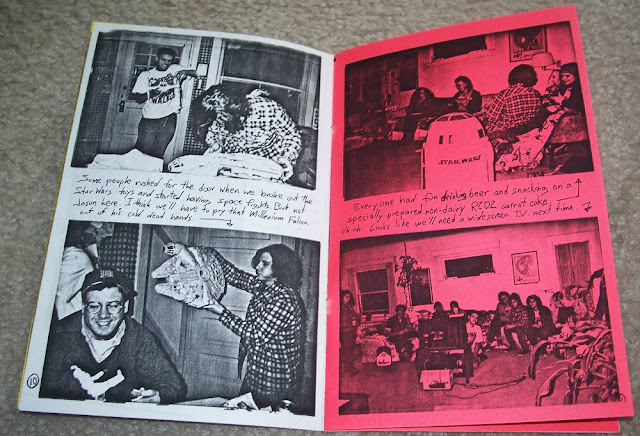 These pages chronicle a wild party featuring a non-dairy R2-D2 carrot cake and a guy in a Twins hat. 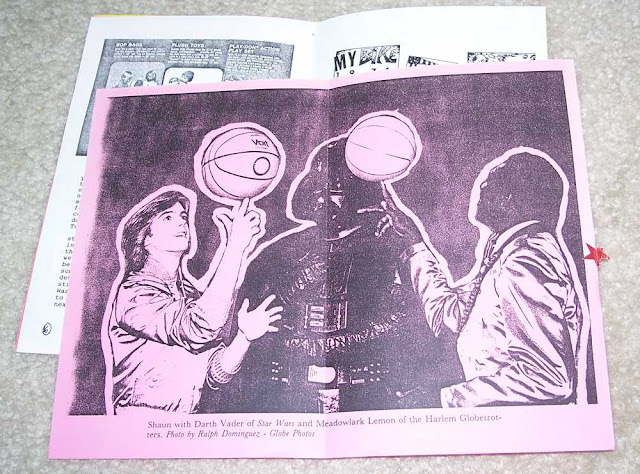 What's a Star Wars zine without a centerfold of Shaun Cassidy playing basketball with Darth Vader and the Globetrotters? 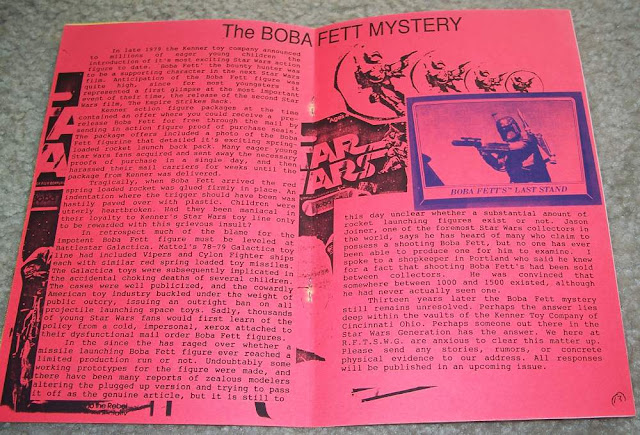 The coolest thing in the publication is probably this article on the rocket-firing Boba Fett. As far as I know it's the earliest published reference to the figure. I love the speculation about production numbers, as well as the general air of mystery. "Perhaps the answer lies deep within the vaults of the Kenner Toy Company of Cincinnati Ohio."

"Tomart's Action Figure Digest" would help clear up the RocketFett story a couple of years later. Did the info they provided come from "deep within the vaults" of Kenner? Sort of!

This was the last issue of RFTSWG issued in zine form. The third issue was printed as a glossy-cover magazine and distributed by Diamond Comics. You can buy a copy here.

As this old interview with RFTSWG publisher Jon Bradley Snyder reveals, about 300 copies of the zine issue were printed. Compare that to 20,000 copies of the glossy magazine. The third issue was the end of the line for RFTSWG; Lucasfilm sent Snyder a cease and desist letter, and that was all she wrote. It worked out pretty well for Snyder, though: He went on to work on a number of officially authorized Star Wars publications.

Did you note the interview's host site? T-Bone's Star Wars Universe, one of the earliest -- and best -- websites devoted to Star Wars. Sites like T-Bone's followed a trail blazed by RFTSWG. And it was a crowded trail: For a while there it seemed like the internet was at least 50% Star Wars sites, most of them part of the same web ring, and all of them perpetually "under construction." Eventually, the internet, and the DIY fan-outreach it perpetuated, developed into a real engine of Star Wars fandom. It's an engine that keeps chugging along today.

The site on which you're reading this played a part in this story, too. The SWCA launched in 1994, a mere year after the modest hand-assembled zine you see above.