Summer MarketWatch is Upon Us...Soon, Spring Must Fall

Happy Summer Space Freaks! Well, sometimes you hope to get a post up one month and it gets pushed to another. Such is the case with this month's MarketWatch segment, however I wanted to make sure that everyone got a chance to see some of the craziness that was up on eBay this Spring (with the delay, some of the original listings are no longer available for viewing).


With the market humming these past few months and surely carrying all the way through the year (and even through the normal Spring slump), this is not only a great but extremely interesting time to be collector. I’m here to give you some of the best nuggets of past few months on eBay with a mix of production, pre-production, and foreign items.
Starting off, we have the only domestic production piece of our update. The Falcon has become a very tough-to-find piece when it comes to vehicles. Regardless of having iterations in each of the three toy line releases, its size and popularity make it a coveted and expensive piece to find sealed. In fact, there are only a handful of sealed Falcons that hit the market each year and the number has been depleting. This is due to a few factors, one of which being deterioration of the packaging, specifically the tape. The tape used on the Falcon and a lot of the larger vehicles is extremely sensitive to temperature and humidity, thus a lot of examples have seen the tape role and detach from the box entirely.
This example of the Falcon is unique in that it’s one of the few items to have a Cloud City setting on the box along with Slave 1, and the Cloud Car. It ties in nicely to the thematic aspect of the Falcon’s landing at Cloud City, and is fairly accurate in terms of the figure layout.
Because of the finite selection of these pieces, it’s not surprising the an AFA85 example of this piece demanded a price tag of $3,500. That may seem high for historical prices but in this day and age that’s completely par for the course.
Falcon ESB Bespin AFA85 - $3,500
Falcon AFA 85 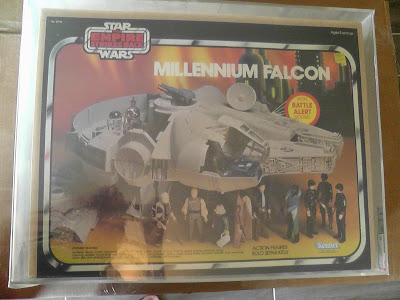 Moving on, we have our first of two pre-production items.  This "Blue Harvest" C-3PO hardcopy is a great example of the figure in a pre-production format. Although it's a "second generation" hardcopy from the early 1990s, it's still an extremely highly sought after piece.   These prototypes have a niche of their own in the hobby and go for a high price given they are essentially 2nd generation items vs. true vintage.
C-3PO Blue Harvest Hardcopy - $1500 (Best Offer Accepted) 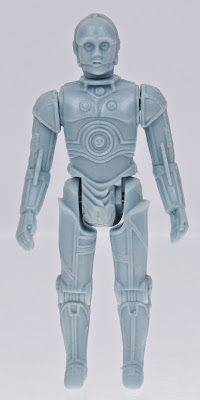 Our next pre-production piece comes from the most readily available sector of proofs and pre-production packaging, the Revenge of the Jedi line. Although there are roughly 50 examples of each figure available as Revenge proof cards, the vehicles are a different story with only a handful of examples of each in existence.   Some like the Rebel Transport and AT-AT are more readily available than others, but all in all these are a bit tougher to come across than the proof cards. This box flat example is definitely one of those that falls on the rare side. Like many of the box mock-ups for the line, the Scout Walker was based on the artwork that was used in the Empire Strikes Back. This can be seen on the vehicle proofs as well as other box mock-ups like the MTV-7, MLC-3, and X-Wing.  Although this artwork was released in a short run on the ROTJ line, the vast majority of production examples under that banner feature the Endor setting. Thus, this is a great piece for someone who wants this artwork with the Jedi logo. With a price tag of $1,500 I know of at least one ROTJ collector who is perturbed that they didn’t grab this when they could have -- it’s a great price on an item that has maybe 2-3 examples in existence.
Scout Walker Revenge Box Flat - $1,500 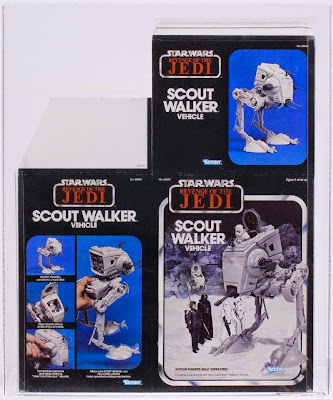 Rounding out this month we have four foreign release figures featuring pieces from the Clipper, Harbert, Meccano and Toltoys lineups -- a true myriad of items from across the globe. If you’re not familiar with these lines I recommend reading up on these here on the SWCA's Lexicon and other forums, as the rich history behind each of these companies and their take on the domestic release is pretty remarkable in some ways and anti-climatic in others.
To start, of our four auctions that would be as costly a new compact car we have a Clipper figure from Belguim. This C-3PO figure is quite similar to the domestic release for Star Wars. With the same imagery and dimension as the 12 back release there’s very little variation. The key differences here are the Clipper logo, which would change as the releases would move forward, and the backer. Clipper figures from the original release for Star Wars are by far the most difficult to find, and this is a great example in fairly good condition receiving a 75 overall from AFA. Given the rarity and demand for these figures the price tag of $4K doesn’t seem too far off, but is a bit high given some recent sales. Still, with its limited supply if you were trying to track this figure down you definitely wouldn’t hesitate to drop that type of coin on a great example like this.
C-3PO Clipper AFA75 - $4,161
C-3PO Clipper Hailing from Italy, the Harbert series of figures is a coveted foreign release line in the annals of vintage Star Wars collecting. The line was very small in terms of total release and the figures are some of the most difficult to find in any release of figures. When you couple this with a favorite character like Yoda you have a $5K+ price tag without breaking a sweat. Condition is everything in vintage collecting and this example is definitely not in the upper echelon, with multiple creases and a yellow bubble. Despite that, someone did fork out over $5K for the item -- something not seen with may single figures even in the up market the hobby is experiencing these days.
Yoda Harbert - $5,675
Yoda Harbert 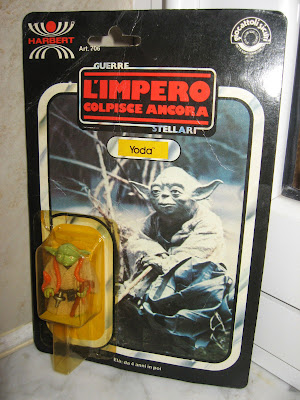 I can never resist highlighting a Meccano figure. It seems every time a good condition example of these square carded examples comes up I have to show it off. More common than Harbert and Clipper figures, the Meccano line has been a favorite of collectors for years due to its availability and quirky square cardbacks that give a slight variation to something very familiar. Here we have the original Leia, seeing a price tag of $3,500 -- not bad price for an AFA80 example. I don’t believe she is one of the rarer figures in the Meccano line, but with great condition comes a high price.
Leia Meccano AFA80 $3,500 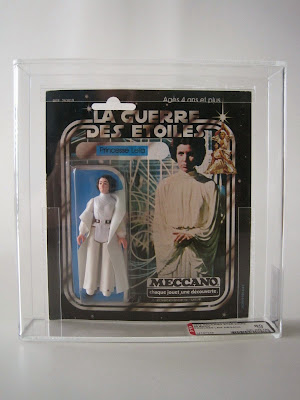 Rounding out our four figures for the day is something unique from our friends down under at Toltoys, and also our friends down under at AFA. A Vinyl Cape Jawa Toltoys figure MOC? Yes, that’s a question because should we really classify something that is no longer attached to the card? What we have here is a bit of a mystery.  This is an example of an ESB Toltoys Jawa with a vinyl cape. As most know the vinyl cape Jawas were only released on Star Wars cards domestically and only for a short time as they were quickly replaced by the cloth cape to give the figures more value in the customers' eyes. This particular figure is part of a few foreign production companies that kept the vinyl cape intact through the Star Wars release and even into the ESB release. Thus, this is one of the rarest versions of one of the rarest figures in the vintage series.   So rare that when you read the fine print on the CIB it’s believed to be authentic, but due to not having a history of ownership they will not 100% legitimize the figure as being authentic. Packaged with the ESB cardback itself and loose cased inside the larger case it’s a unique display of an item that is a bit of a legend in the hobby. The price tag for the item seems low given the rarity, but given the context of the figure itself and inability to verify authenticity most collectors will proceed with caution on an item like this.
Vinyl Cape Jawa Toltoys – AFA80 - $3,199.99
Vinyl Cape Jawa Toltoys 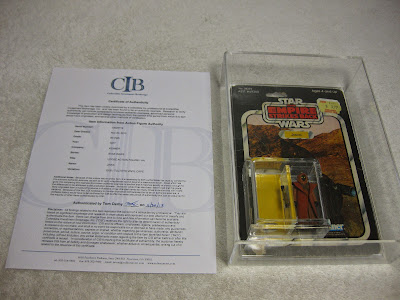 That wraps up the Spring MarketWatch. We’ll have the June post featured in 'Chive Cast 62 up soon.
Wampa Wampa,
FB24
Posted by Fratboy24 at 8:00 AM