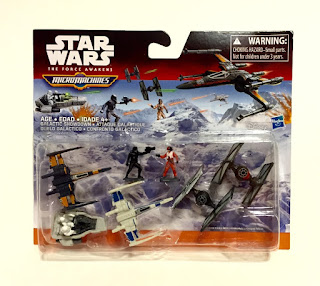 As the Labor Day holiday weekend comes to a close, so does the initial wave of Star Wars merchandising chaos that was unleashed worldwide on "Force Friday" -- the official debut of licensed products for The Force Awakens. As a vintage collector by nature, I had truly expected to emerge unscathed in its wake. I would maintain my collecting composure and fight off any temptation to spend a single cent on an item representing a film I hadn't even seen.


That was a blunder I had already committed three times in my past, and having parted ways with my modern collection shortly thereafter with no regrets since, there was no way this would happen again. Nevertheless, this weekend I found out that it was I who was once again mistaken, about a great many things... 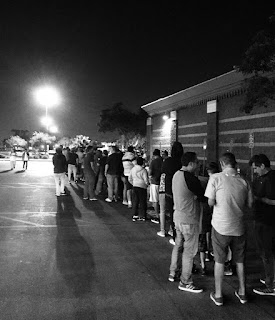 It all began with an innocent invitation from some coworkers and fellow Star Wars fans (one a Hot Wheels enthusiast and the other a Funko Pop Toys collector) to hit the town and scope out all of the Force Friday mayhem. Living in the enormous urban sprawl that is Los Angeles, there was bound to be a crazy turnout and a plethora of cool new Star Wars stuff that would be neat to at least take a look at in hand. And without any kids of my own to buy new toys for, this would be a fun way to collect vicariously with two friends that had modest Force Friday shopping lists. Ultimately, we were only able to get into one Toys 'R Us store that had a shockingly unimpressive display and meager selection. On top of that, we had waited outside in a relatively short line for over an hour-and-a-half to gain entry. It was as if we were trying to get into a hot night club on a Saturday night. As we abandoned hope just after 2am after arriving at a Target that had just closed for the night, my friends' disappointment was palpable.

The next afternoon I pulled into a shopping complex to get some lunch and compulsively decided to stop by a Target just to see if they had more to offer, and to look for the things that my friends weren't able to find the night before. To my surprise, a few of those were sitting on the shelves and I immediately scooped them up. Then, something happened which I'm still struggling to completely come to terms with. My eyes were drawn to the newly revived Micro Machines that were remnants of the store's otherwise decimated Force Friday stock. Before I knew it, I was walking back to our car with two shopping bags full of the first newly-released Star Wars toys I had bought in nearly 10 years. I was feeling excitement and disgust, satisfaction and regret -- all at once. For reasons beyond my comprehension in that moment, I succumbed to this incredibly creepy talking Kylo Ren figure's words: "Don't fight it...you know you can't..." 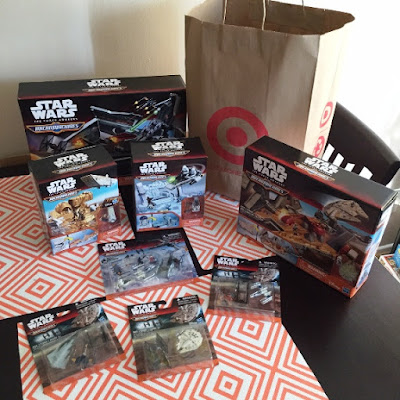 One of the objectives of this post is an attempt to analyze how and why I found myself in this position. The other is to highlight the new line of Micro Machines through comparing them with and reminiscing about some of the playsets, vehicles, and figures from the original Galoob line from the mid-1990s that I unearthed while visiting my childhood home over the holiday. As it turns out, these little things embody a unique character trait of my collecting personality.

I'll be the first to admit that for a good portion of my collecting life, my fandom and collection were intertwined. In addition to collecting the vintage line, I collected the majority of 3 3/4" action figure toys from the POTF2 line all the way through Revenge of the Sith. That last "midnight madness" in 2005 was actually the first I had ever attended (as I figured that it might be my last chance). It was fun, but with my collecting interests increasingly focused on vintage and my relationship with the new films as a fan beginning to strain, I started to question whether it was really worthwhile for me. After the third prequel's release, there was an immediate disconnect which triggered a complete psychological shift. I was saddened by the fact that Star Wars had gone out on what I considered to be an undeniably disappointing note. I had also come to the realization that my collecting and fandom had become truly different aspects of my life, and didn't need to be so interconnected anymore. Several months later, my modern collection was out the door for good.

Flash forward to the present with a new film on the horizon. Up to this point, the build-up to The Force Awakens has certainly challenged my previous tendency to subdue enthusiasm for anything new that the franchise has to offer. The return of classic characters and vehicles coupled with an overemphasis on "practical effects" and shooting on film in Disney/Lucasfilm's calculated marketing approach has definitely caught my attention, though I've constantly reminded myself to reserve judgement and keep expectations in check. Separating my collecting from my fandom (much like church and state) was not going to be a problem. That is, until I saw that Hasbro was bringing back Micro Machines.

Galoob's Micro Machines were the first Star Wars toys that I really considered my own. They were also the first that I was able to buy in a store by my own volition with my weekly allowance. There were characters and worlds that I could only loosely replicate with the limited (though cherished) vintage toys I had at the time. Needless to say, I was one hooked 8 year old. Furthermore, while initially excited by the new figures in 1995, they didn't come close to my Micro Machines in terms of quality and quantity of play and enjoyment.

Coming into Force Friday, I was looking forward to the experience of seeing Star Wars Micro Machines in the toy aisles once more. Upon seeing them, they became a convergence of collecting and fandom that eclipsed anything I had experienced during the prequel era. It was that familiar fondness for both content (TIE Figthers, X-Wings, the Falcon) and object (the Micro Machines brand) that was simply not present before, and impossible for me to resist.


Hasbro has brought back several Micro Machines staples for the new line, including themed vehicle 3-packs and "Deluxe" sets including corresponding figures, as well as transforming vehicle and character-based playsets (for anyone unfamiliar, this television commercial is all you need). They've also "re-issued" classic vehicles from the original line and even included new sets from Episodes II and III (which never had Micro Machines) -- all of which were astute moves. Lastly, they've introduced a set of  single "blind-bagged" toys, which I'm honestly not all too thrilled about, but kids are sure to enjoy them. To keep things simple, I decided that I would only pick up the sets pertaining to the new film and see how that went. 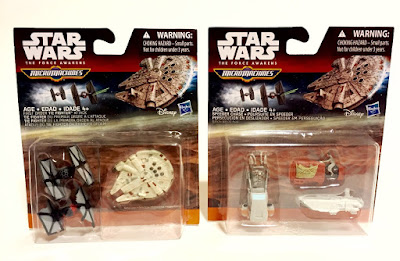 Though the packaging for the new playsets lacks the nifty original artwork present on the Galoob packaging (some of which was created by Ralph McQuarrie -- a tough act to follow), they still capture a similar spirit and are pleasing to the eye despite all of the business requirements for today's toy packaging. While the First Order Star Destroyer set is decently large, other playsets seem to have been slightly scaled down compared to their Galoob counterparts.


For example, the new transforming Millennium Falcon playset is somewhat dwarfed by the original released in the 1990s, which was one of my most anticipated toys as a kid (I had one on layaway at our local K-Mart for weeks on end). 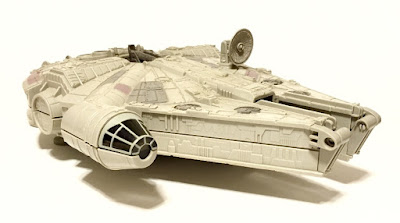 A sticking point that both the original Galoob and new Hasbro lines share is that of comparative scale. This is impossible to avoid when it comes to the mismatched sizes of vehicles and figures (and really applies to most Star Wars toys). However, the new line exhibits some additional inconsistencies. Some of the new vehicles and figures roughly match the scale of the originals while others are noticeably larger, which is a let-down. Also missing are the small clear plastic stands for displaying the ships that were included in the original line. These were especially helpful for certain vehicles to stand dynamically on their own. Finally, though the 3-packs and deluxe sets are very reasonably priced, the number of vehicles and figures included in the playsets has significantly decreased with these new offerings compared to the originals, which is frustrating given their retail prices ($19.99 for the transforming character sets, $29.99 for the Falcon, and $39.99 for the First Order Star Destroyer).


These shortcomings aside (as well as any The Force Awakens may end up having as a film), I think it's absolutely great news that Micro Machines are a part of the new Star Wars product catalog. Even better, they've kept the line's classic slogan: "Remember, if it doesn't say Star Wars Micro Machines...it's not the real thing!"


For anyone interested in the history of the original Micro Machines line, I'd highly suggest checking out Part 1 of Tim Veekhoven's new feature on StarWars.com.
Posted by Stephen Danley at 10:39 PM