Raising the Barr: The Collection of Ross Barr 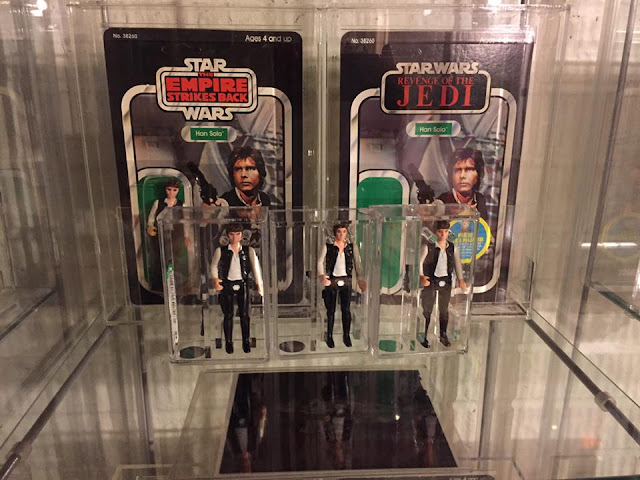 Greeting folks. It’s been a long time coming, but I’m finally getting back in the swing of things with our collector limelights and have several discussions underway with a slew of great collectors in the hobby.

This month we head back to focusing on a focus collector. Thus far we’ve had a few interviews with focus collectors and they’re always fun to review. Not only do you get to see one of a kind items that usually only end up in the hands of someone with a limited scope, but you also get to dive right into a lot of pointed questions about the character and the collector that are more difficult to get into when you’re covering a broader set of items.

The collector I’ve chosen to focus on for this update is Ross Barr. Ross has been collecting for several years, but in comparison to others I’ve interviewed to date he’s still a rookie. Starting to collect a few years back, Ross has expanded and contracted his collection and today has a more refined collection that focuses in on a smaller segment of items, and particularly one character: Han Solo.

I’ve known Ross for a short while, however during that time he’s grown to be one of my closest compadres in the collecting community. He’s a very personable individual who has a vast network in the hobby. Ross gives the hobby itself a lot of attention and a great deal of his personal time outside of just collecting. In addition to being involved in the vast interpersonal aspects of the hobby from conventions and general networking, he is also involved in the day-to-day management of the hobby serving as an admin for four separate collecting groups on Facebook: the 12 Back Collectors Group, the Empire Strikes Back Collectors Group, the Return of the Jedi Collector Group, and the "Dark Times" Collectors Group. Being an admin can be a daunting task giving how quickly these sites are growing both in relevance and overall membership. Ross is one of the few that I’ve met over the years that truly seems to have a focus on keeping things fair and organized vs. having an ego over his position on these boards. Thus, it’s always great to get to catch up with him and hear more on his adventures in collecting and perspectives in the hobby.

Although Ross is a Han focus collector, he goes beyond that with his collection boasting a full range of figures, prototypes, and store displays that are enough to make any collector new or old take notice. As we started to chat we discussed the same place that most collectors start to collect, the beginning.

FP: How did you start to collect?

RB: I’ve only in the hobby the last three years in my current capacity, I started on Rebelscum in 2013.  However I’ve always been a collector. I had my childhood figures and never got rid of them. Between the age of 25 and 32 I picked up a few figures [he was in law school prior to that] as when I moved  from New York to Ohio I found my childhood collection. About a year later I started collecting more intently.

FP: How did you come up with your focus?

RB: It started to come together as I was really getting into collecting. I always liked Han Solo, his redemption story (overcoming selfishness) and the message that goes along with that, given that there was always a connection to that character growing up. I had a few Han pieces in my collection at that point -- an ESB 31 back with a small head being the key one. As I looked at other focus collections, no one really had a Han Solo focus, so I went for it. The collection encompasses a lot of different items but at the core it’s a carded Han Solo (Original) focus, but when it comes to pre-production, it’s anything Han related. 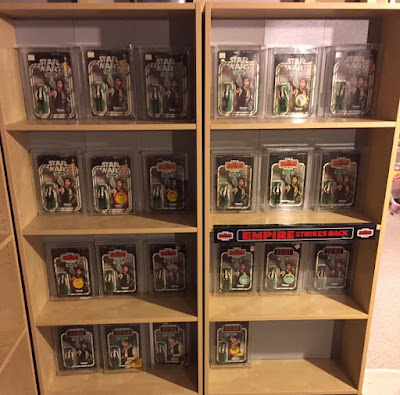 FP: In addition to the Han focus, what else is in your collection?

RB: When I started to collect again I had the seed of an idea to obtain all 92 characters on their debut cards. I got pretty close to this, but decided a while back to stop the expansion and got rid of my POTF collection, and added more focus to the Han Solo collection. I still have the original 79 with a few variants, including cloth and vinyl Jawa, and Bespin Luke and Leia alternative artwork. Then there’s the vehicles and playsets crossing all three movies, Jedi, ESB and Star Wars. The original Star Wars was what really appealed to me and is where I’ve put some energy one of my favorite items is the Luke Radio Headset. I have a lot of the Star Wars displays, including the Collect All 12 and 21 bells, Fett header as well as the Han and Luke Laser Pistol headers. 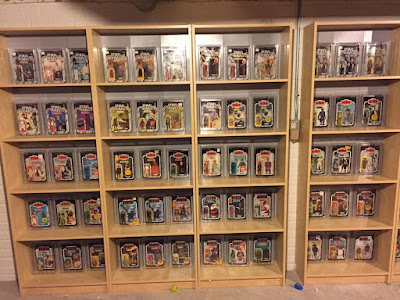 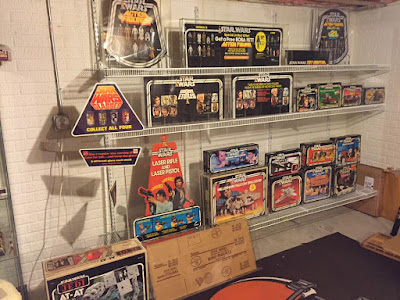 FP: What is your most coveted piece in your collection?

RB: In the Han collection it’s the Han Trench Coat Sample on the Emperor’s Royal Guard cardback with Han wearing a non-production jacket. I had to make a massive trade to pick it up, but it’s truly the centerpiece of the collection. 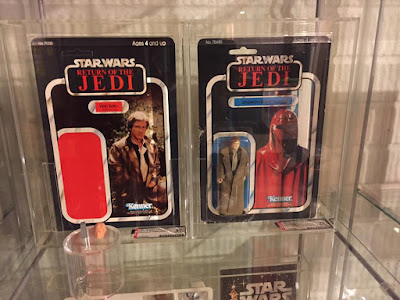 RB: In addition to that there’s several key pieces both Han related and in general. The first one that comes to mind is the long Boba Fett header display which I just sent in to get graded (one of the few things I’ve sent in over the years). It came from a find that I was working on for a while it’s a great piece.

I have a run of the three double telescoping saber figures which are key items for me personally. Included in that run I have a first shot Obi-Wan Kenobi with mushroom tip saber (one of the first figures produced). Then I have a set of the sabers themselves including 4 full DT sabers and 3 halfs, with three different prototype sabers: Ben engineering pilot, Vader (circle), Vader (pre-production) and Luke engineering pilot. 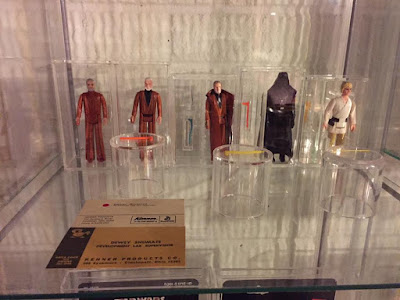 RB: I have the unproduced POTF proof for Han Hoth -- a tough piece to find. On the opposite side of the time spectrum I also have the first shot for Han Hoth. 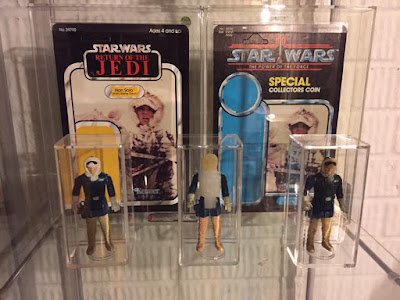 RB: Staying on the topic of pre-production, there are a few other key common proofs that I’ve picked up over the years: ROTJ Han Trench Coat 79, ROTJ Han Bespin 65 and Han Original Revenge. 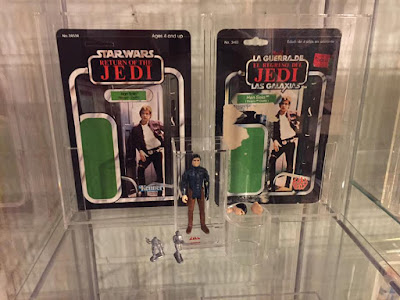 FP: Has your focused evolved over your collecting life?

RB: I went from buying a lot of stuff, this and that...it was a bit unorganized for a while. It was getting cluttered, so I got rid of the POTF stuff I had and focused on the early stuff (got rid of Anakin and Yak Face), they really worried me due to the fragileness of the figures. Started to focus on early stuff and from there I started to get more focused on Han. I keep focused on the older stuff as well including the displays. My tastes changed and things evolved over time.

FP: How do you give back to the collecting community?

RB: The primary thing I do is being admin to three of the Facebook groups [now four including the "Dark Times"]: The 12 Back, ESB and ROTJ pages. The groups have been around for over a year now. I have an added appreciation for the admins on Rebelscum. It was really cool to see how much of a community RS created, and it’s how you and I got our starts in the hobby. People are a little less respectful of the admins on Facebook than the mods on RS, as the mods are truly the gateway to you being part of the site or not.
FP: How do you keep your collection fresh?

RB: For better or worse I’ve always had a bit of an addictive personality. It’s about time and energy and when I moved to OH I had more time to do things and that’s where it took off. Sometimes it’s not about keeping it fresh, it’s about keeping myself away from it. I’ve been really active over the last three years. It’s a lot of keeping up with the community, Facebook, RS and eBay. Friends are a key part of it. A lot of them have gotten out of the hobby, but there are a lot of people that have become good friends through the hobby.

FP: What are some of your interests outside of collecting?

RB: I serve on three non-profit boards. I have three kids: 4, 6 and 2. I’m really into Cleveland sports good or bad... the Browns, Cavaliers and Indians. I love concerts, and I’ve been to nearly 90 Phish shows over the years.

FP: Does your collection spill over into any other collectibles?

RB: Not too much. A little He-Man, GI Joe, but it’s because I had the room at one point. Since then I’ve dropped those lines. I have been working on MASK -- I have a few transparencies, and 10 MOC figures.

FP: What does your significant other think of your collection?

RB: She’s not into it. She doesn’t collect with me or do the shows, but she really appreciates that it’s important to me.  She’s happy for me, and enjoys that it makes me happy.


Focus collecting is an act of patience. For many it takes years to amass their collection to the set of items they are interested in. It may takes years to find a single item and several people will go for more than a year between finding anything new to add to their collection. Over time, these focii evolve in some cases based on needs and wants, in other cases based on what becomes available to them. In the end it’s truly an act of loyalty and dedication to pull together an expansive focus collection, especially when it comes to a character like Han.

I want to thank Ross for opening up his home and time to me to discuss a great collection, and the great story of how it came together.