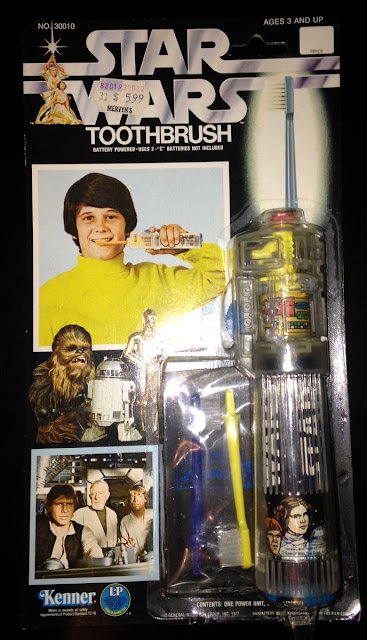 What do you reckon is the most obscure American Star Wars product released by Kenner? I'm not talking about a variation, a promotional item, or a release by a non-U.S. licensee, but a distinct American product.


My vote goes to the battery-powered toothbrush, specifically the versions released in conjunction with The Empire Strikes Back and Return of the Jedi.

Undoubtedly, many collectors are familiar with the original version of the item, which Kenner issued as part of its early range of Star Wars product in 1978. But did you know that an Empire Strikes Back version was released on card? Or that JCPenney offered an exclusive Return of the Jedi version to its mail-order customers?

The base product, irrespective of its logo and graphics, was a reworking of the Six Million Dollar Man and Bionic Woman toothbrushes, released in the mid-'70s. Like its Bionic counterparts, the Star Wars version utilized a clear plastic housing through which colorful graphics were visible. 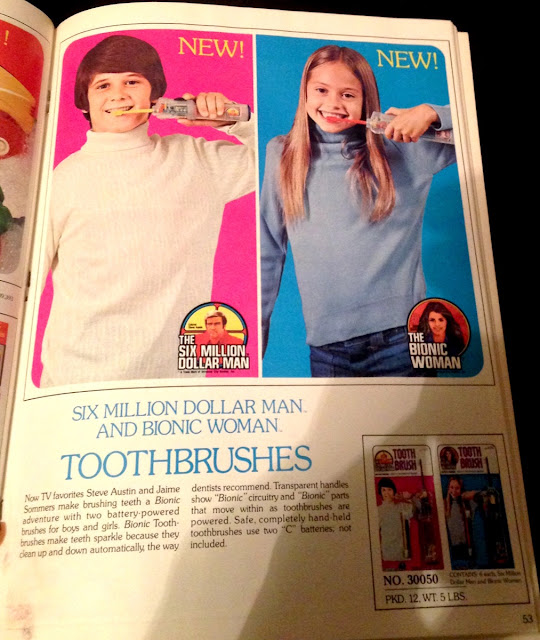 But Kenner's association with battery-powered toothbrushes actually goes back to 1972, when the company introduced a teeth-cleaning apparatus  in association with a license concerning the Snoopy character. 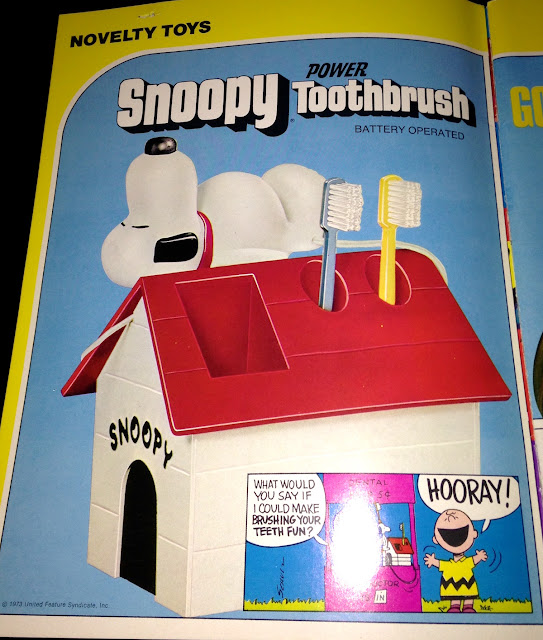 The Snoopy Power Toothbrush must have been a hit for Kenner, as it's the first item featured in the company's 1973 Toy Fair catalog. And it was quickly followed by similar products based on Mickey Mouse and The Flintstones. 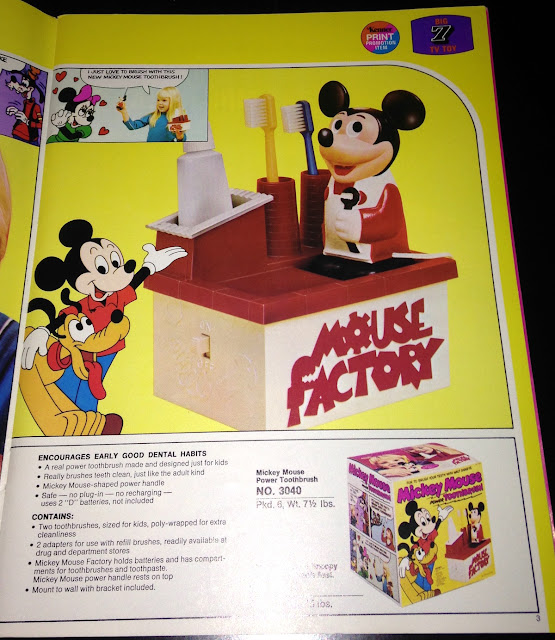 Although the forms of these earlier toothbrushes differed from the Bionic and Star Wars versions in that their batteries were housed in a separate casing, to which the handle attached via a power cable, the focus on licensing and the multi-colored brush attachments clearly identify them as predecessors of the later products.

It's also worth mentioning that the packaging for these products featured comics-style panels showing kids talking to the fictional characters. You'll want to recall this fact when I discuss the reverse of the blister card on which the Star Wars toothbrush came packaged. 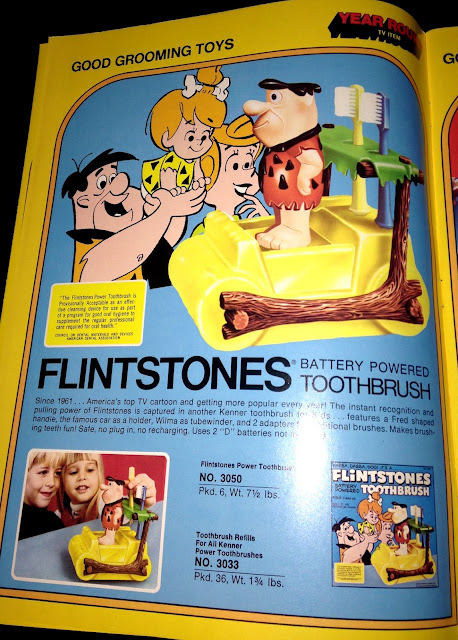 I think the Flintstones Battery Powered Toothbrush is the most successful of these items, as the car shape into which the battery case was formed was pretty darn cool -- much more so than the bizarre "factory" utilized on the iteration of the toothbrush devoted to Mickey Mouse. (Mickey Mouse was an industrialist? A robber baron?)

Still, it seems to me that a proper Flintstones toothbrush should look like a hedgehog strapped to a small dinosaur bone. Anything less is a betrayal of the show's aesthetic. 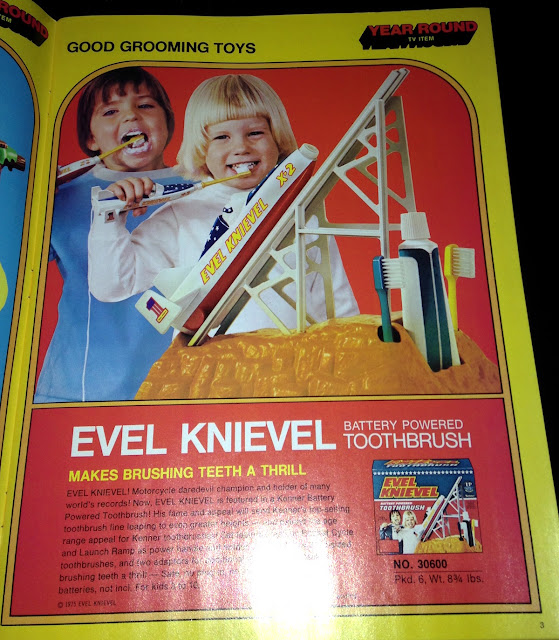 But my favorite of these pre-Bionic products is the Evel Knievel Battery Powered Toothbrush, which featured a battery casing formed in the likeness of rocky terrain and a handle mimicking Evel's infamous Skycycle X-2.

Now, like most people of refinement and taste, I know a thing or two about Evel Knievel -- and one of the things I know is that the Skycyle crashed while Evel attempted to traverse the Snake River Canyon in 1974. Knievel, like any great American, went down with his ship, nearly dying in the process.

Kids, let this be a lesson: In order to brush your teeth, you must have teeth. 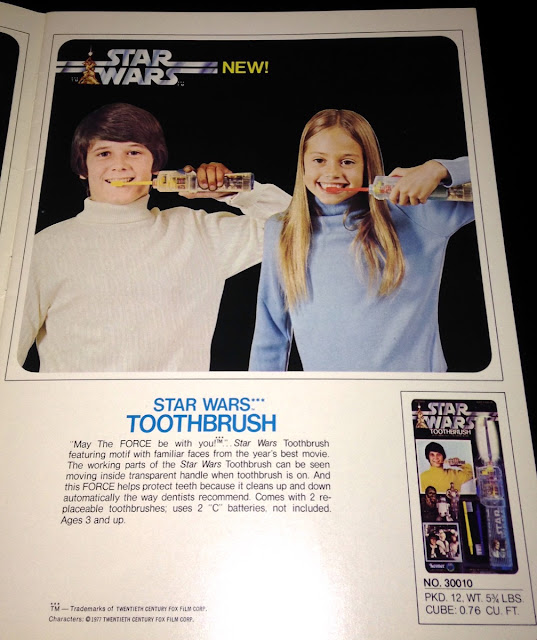 Anyway, by the time 1978 rolled around, the folks at Kenner were experienced uniters of battery-powered toothbrushes and popular licenses. And since the Bionic toothbrushes had been introduced a mere two years earlier, it was natural for the company to recycle the product into the Star Wars line. To update it, they simply changed the graphical insert housed within the clear plastic handle.

In some ways the Star Wars Toothbrush was even more amenable to its license than were the Bionic toothbrushes to theirs. With a little imagination, the two brush attachments could be taken as lightsaber beams. To that end, Kenner molded the implements in blue and yellow plastic, thereby causing them to echo the lightsaber accessories included with their Ben Kenobi and Luke Skywalker action figures.

Interestingly, the Japanese version of the product, released by Takara, featured a red brush attachment, possibly in emulation of Darth Vader's lightsaber. It's said that Vader was more machine than man. But when it came to brushing his teeth, he was alllll machine, baby. 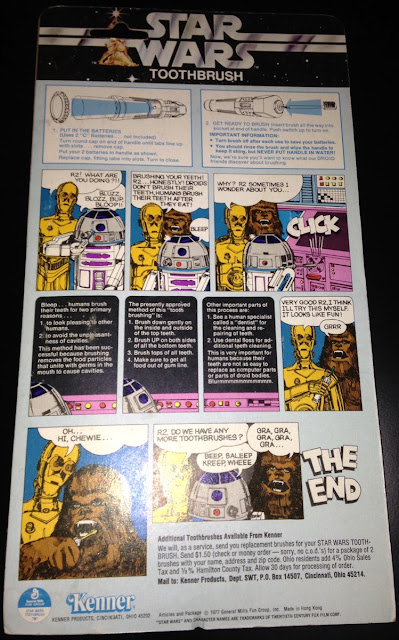 The back of the product's blister card is -- or should be -- legendary. It features comics-style panels similar to those found on the boxes of Kenner's earlier toothbrushes. But in this instance the featured characters are drawn from the Star Wars universe.

Chewbacca makes a rather ignominious appearance. Why the heck is he wearing the same expression in every panel in which he's featured? And what's with all his droid bullying?

Hey, Chewbacca: Threatening to pull C-3PO's arms out of their sockets was bad enough. Don't you even think of sticking his toothbrush into your nasty Wookiee mouth. 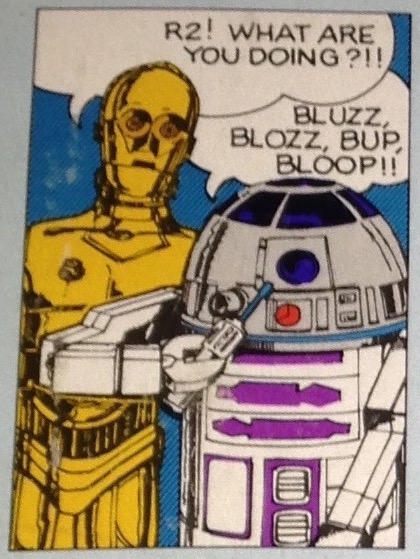 Of course, droids, being without teeth, have no need of toothbrushes.

But when R2-D2 is depicted with a forearm and grasping claw-hand, we've clearly exceeded the limits of sense and rationality. 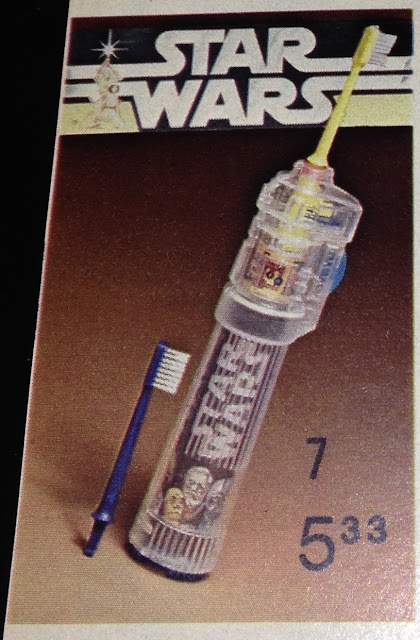 The Star Wars Toothbrush was also available via JCPenney's Christmas catalog, a popular shopping tool of the era. The above photo shows the manner in which the product was presented in the catalog. The large "Star Wars" logo leaves no doubt about its relationship to the most popular movie of the period.

"Turn on the 11-in. plastic toothbrush and watch it work."

Not the zestiest line of advertising copy ever written, but I suppose it'll suffice. 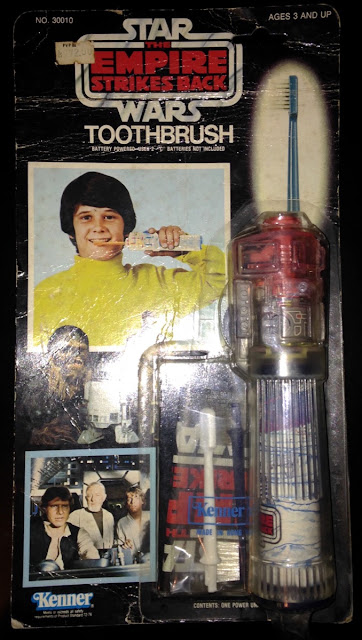 In 1980, Kenner updated the product with Empire Strikes Back graphics and packaging. The piece of plastic inside the upper portion of the casing was changed from yellow to orange, and the brushes were molded in white and dark blue rather than blue and yellow. But in most respects it resembled its predecessor.

In my experience, the carded ESB toothbrush is one of the rarest Kenner Star Wars items -- much rarer than the TIE Bomber or large-size IG-88. 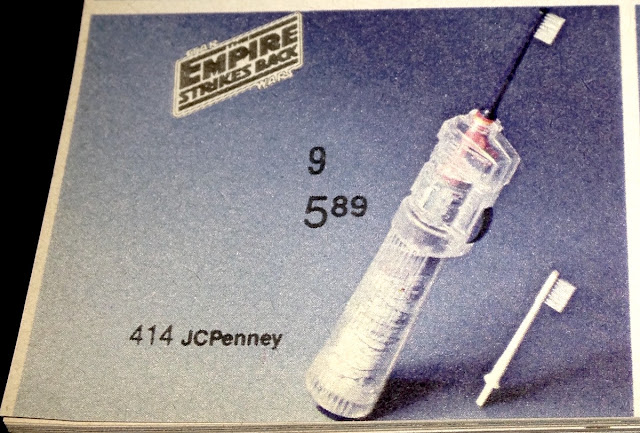 Though rare in carded form, the Empire version of the product could once again be obtained through the JCPenney catalog, in which it was featured during the Christmas season of 1980. In fact, for many years I assumed this item was exclusive to JCPenney, as I was not aware of the packaged version.

In the two years following its initial appearance in the JCPenney catalog, the price of the toothbrush jumped from $5.33 to $5.89. 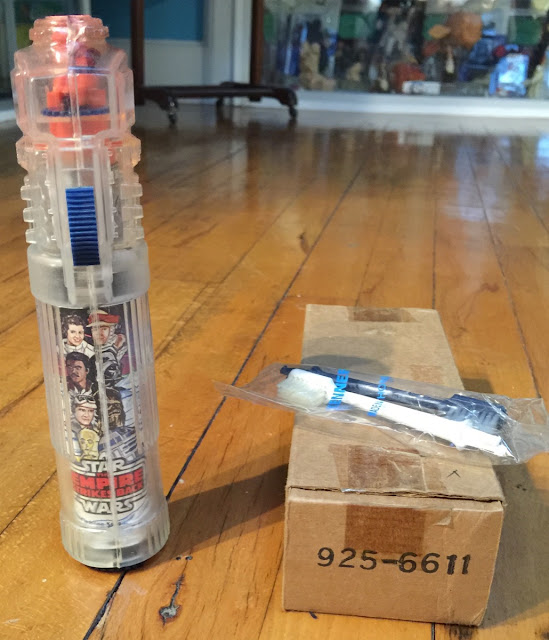 The mail-order version shipped in a brown box marked with a JCPenney catalog number. As you
can see, the graphics featured a multitude of Star Wars characters -- some of them possessing actual teeth. 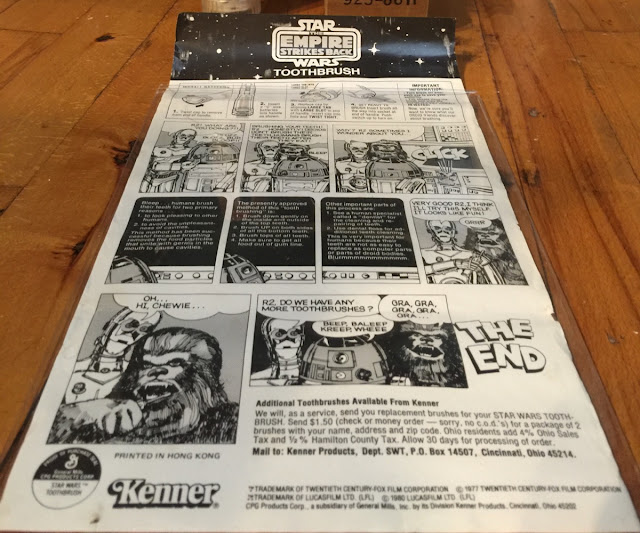 Upon opening the box, the first thing you did, after feeling angry that Santa didn't bring you something cooler, was read the wacky comic. It was printed in black and white on a separate flyer.

Just think, had Kenner opted to forgo the comic when putting together the mail-away version of the product, the child of 1980 would have missed out on the spectacle of claw-hand R2 incongruously poking his dome with a lame Christmas present. 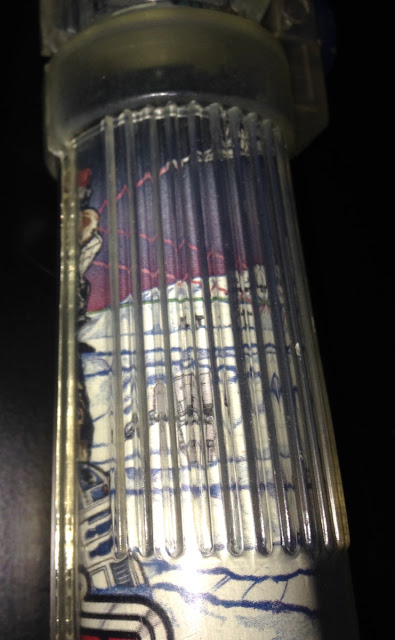 Here's another look at the graphics set inside the cylindrical case of the toothbrush.

I'm sorry to do this to you, but here I must digress. As a fan of Cervantes and Melville, I love digressions.

Take a look at the artwork discussed here and here, and note how similar it is to the Hoth-inspired background depicted in the scene featured on the ESB toothbrush.

Weird, right? Though the arrangements of the AT-ATs and Snowspeeders differ between the two compositions, it's clear they're connected in some way. I only noticed this now, while putting together this blog post.

Okay, so it wasn't much of a digression. Maybe it wasn't even interesting.

Look, you're not paying for this, right? This is what they call "free entertainment," yes? If you're not satisfied, StarWars.com is just a click away. It's the source for all of your nerdlinger needs. They even have recipes for Poe Dameron Pie. 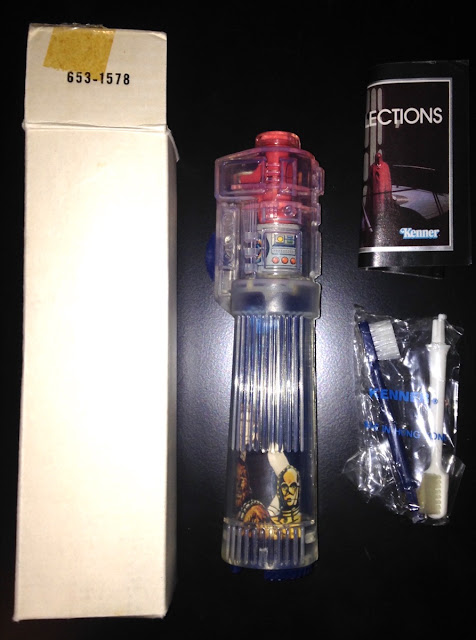 In 1983, upon the release of Return of the Jedi, Kenner was ready with a third iteration of their Star Wars toothbrush. The brush attachments remained blue and white.

The graphics show the second Death Star and the main human characters, all of them wearing ROTJ-specific garb. 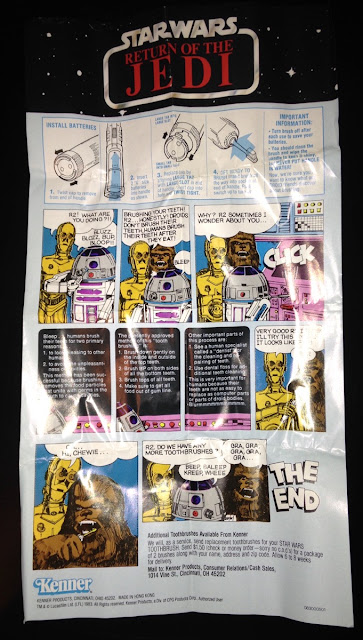 This time around, the included flyer was printed in color, but aside from the presence of the ROTJ logo, it was identical to the previous version, right down to Chewbacca's weirdly poetic "GRA, GRA, GRA, GRA, GRA...."

This version was obtainable solely through the JCPenney catalog. It was a JCP exclusive, and no carded version exists. 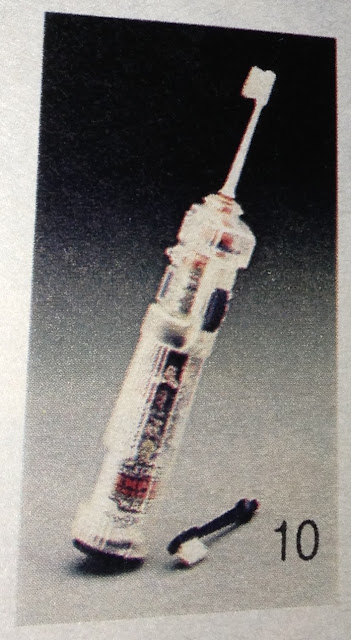 For an exclusive product, it's woefully underrepresented in the catalog, being advertised via a small, drab-looking photograph.

The catalog photos for the previous versions of the toothbrush featured the logos of the movies with which they were associated. But there's no logo featured on the photo of the ROTJ toothbrush. In fact, there isn't even a ROTJ toothbrush: that's the ESB model you see pictured there.

Without a good photo or a logo to draw the reader's attention, I think it's likely that most folks glanced right over this without realizing what they were looking at.

Even the lame-o advertising copy is gone. Yet the price still increased: The cost of brushing your teeth with the Force now exceeded $6. 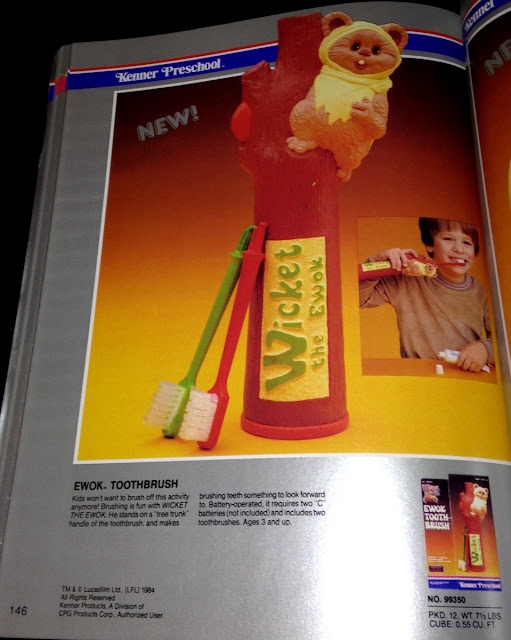 Kenner's commitment to Star Wars dental products didn't end with the departure from theaters of the Star Wars franchise. In 1984, the company produced the Ewok Toothbrush. The product was released as part of Kenner's preschool line, a bold attempt by the company to make headway in a market predicated on the tastes of people who haven't yet learned to use the toilet. 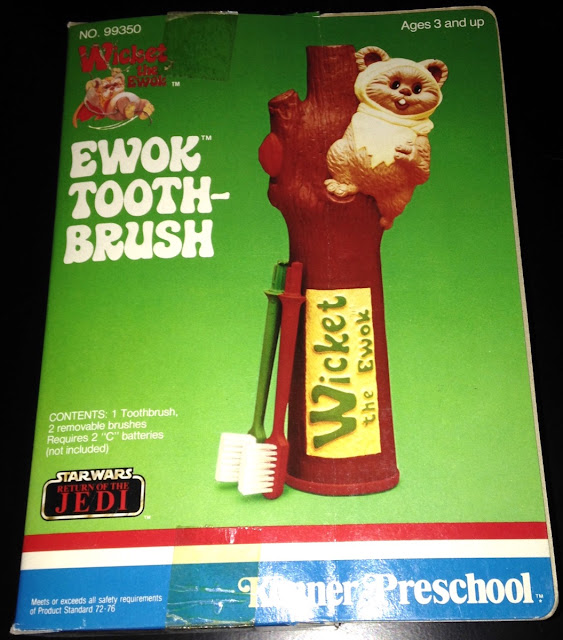 Earlier I lamented the fact that the Flintstones toothbrush wasn't formed in the likeness of a hedgehog strapped to a bone. Well, the Ewok Toothbrush, with its rustic shape and figural emphasis, almost made up for that deficiency. Among other things, it allowed kids to drool their nasty mouth ooze all over Wicket's adorable head.

Here ends our look at Kenner's Star Wars toothbrushes. Use them to clean your teeth after every serving of Poe Dameron Pie.

Thanks to Yehuda Kleinman for supplying a couple of photos.
Posted by Ron at 9:00 AM