Guest blogger and long-time Australian collector Ben Sheehan reflects on the vintage collecting landscape in the land down under in the 1990s and now, as well as his discovery of the Archive and how it influenced him.

If you've heard the recent 'Chive Cast (Episode 70) heralding Stephen J. Sansweet’s 1992 tome Star Wars: From Concept to Screen to Collectible, you’d know how directly the publication influenced collectors in the early to mid 90s. Names like Gus Lopez, Ron Salvatore, John Wooten, and Chris Georgoulias have frequently cited it as key to the evolution of their collecting habits.

This got me thinking about media and collecting culture -- mainly because the book wasn’t a huge hit in Australia (to the point that it was actually quite difficult to track a copy down even years after its release).

What that says about Australian collectors, I don't know exactly.

But it was another Sansweet release -- 1994’s Tomart's Price Guide to Worldwide Star Wars Collectibles, that was hugely influential on Star Wars collecting and collectors down under at this time. 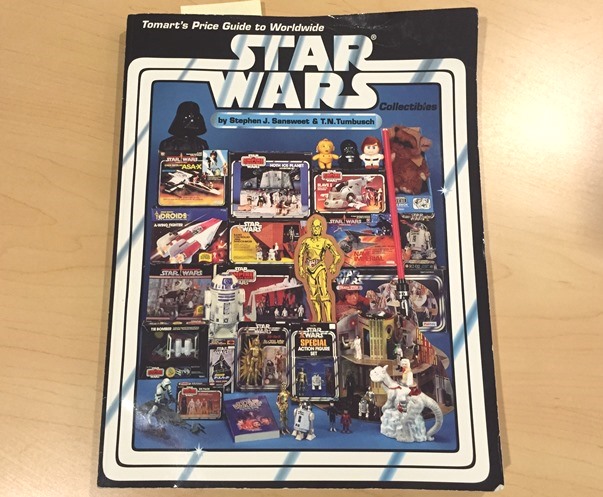 Somehow the Tomart’s Price Guide managed to capture the zeitgeist of the pre-POTF2 era down under, almost to the point it became part of Aussie collecting's DNA. Through it, Sansweet's name became positively synonymous with all things vintage Star Wars.

Collectors routinely carried around a heavily annotated, dog-eared copy to toy shows, other collectors' houses, or on buying expeditions. Hours, if not days were spent gazing at each page, each detail -- and almost as importantly, each price.

In 1997 I saw an elderly woman clutching a copy as she bought vintage toys for "her son" during a convention (attended by the indefatigable Sansweet, no less).

Maybe it was the presence of the huge volume of carded figure overstock in circulation as the result of the Hong Kong warehouse clean outs in the late 1980s, or the readily available cases of POTF figures imported via the docks in Singapore.

But prior to the book, no one really knew how these items should be priced.

In the early to mid 90s, Australia had a marketplace like the prototype world of today: every purchase was a step into the unknown. Should we pay the same for a POTF Yak Face as they did overseas -- or should we pay even more, or perhaps much less? What if an item was common here, but rare abroad (as was the case with figures such as POTF Anakin, Nikto, AT-AT Driver, and Gamorrean Guard)? 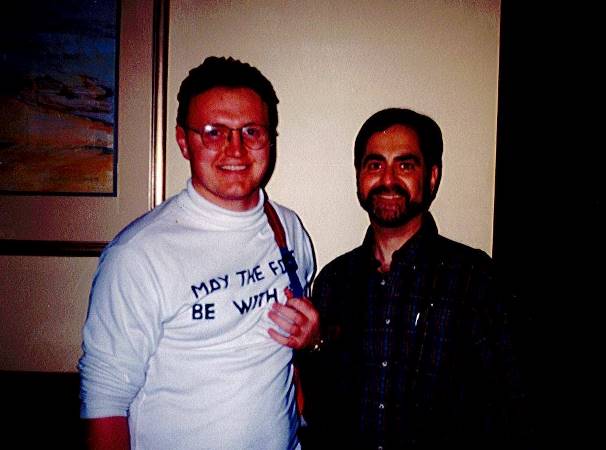 Sansweet with collector Paul Naylor at Australia's Force 1 Convention in 1995, was hugely influential on collectors in Australia.


Those were real questions collectors needed to ask themselves in what was a tiny fishbowl of a marketplace, saturated with vintage product.

Sansweet and Tomart not only provided prices, they had created a framework for collecting with their book, and it was almost universally accepted.

Figure you didn’t want to buy dog food packaging with a Star Wars promotion on it? Well, actually, yes you did. The Harper’s Dog Chow sticker items were in the book, and repeat readings tended to create an interest in the more peripheral collectibles to the point they soon factored into your next want list. Just ask Aussie food licensing fiend Paul Naylor.

You also needed a vinyl caped Jawa, and you needed at least one of everything. The book was a check-list, and it seemed very natural to follow it.

Better still, it allowed you to identify items that were outside the parameters of normal collecting. The lack of an ESB vinyl cape Jawa in the book meant that owning one sold locally had a rare caché attached. Ergo other items released by the local distributor Toltoys.


Which brings me to the Star Wars Collector’s Archive itself -- the ultimate influencer for collectors in the mid to late 1990s.

I discovered the Archive sometime in '94, and the event roughly coincided with a 22 year-old version of me discovering the net at a computer lab under the Deakin University theatre.

One Netscape Navigator search for "Star Wars" later, and I’m looking at this Archive thing. There was a lot on it that I didn’t understand. Most of it, even. What was a hardcopy? What was a sculpt, or a proof card, or concept artwork? And who was even interested in concept artwork, when you could look at a 21 back Fett?

Why would you want a prototype of a production figure? Sure I wanted a Blockade Runner, but who needed a hardcopy Greedo?

For a long time it seemed like I was the only one in Australia wanting to know the answers to those questions too. I (very) slowly began piecing together what I saw in Toy Shop, Sansweet’s’ first book, and what I was reading on the Archive to discover that not only did I like all of it, I actually wanted all of it.

Elsewhere, in complete isolation, perhaps hundreds of other Austalian collectors were beginning a similar path via Sansweet’s book.

As the Archive evolved, John Wooten became incredibly influential on me. His constantly evolving Stormtrooper proof card run/Archive entry seemed to need to be monitored regularly. It rewrote my want list of proofs on what seemed like a regular basis.

Archive updates, which were often almost as scarce as the toys featured in them, were highly anticipated.

In non chronological order: I watched Ron Salvatore begin to piece together his acetate Leia Hoth sculpt. I saw Steve Denny’s entire set of POTF proof cards for sale at a cool 50 grand (then disappear, as though someone had bought them). I read to be wary of people trying to scam collectors with everything from Blue Harvest pieces, fake vinyl cape Jawa bubbles to "unproduced" POTF era pieces. I found out that Brennan Swain used to ride vert on his BMX (OK, not SW related, but still significant to me).

The fact that every item featured on the Archive was entirely unobtainable, or at least seemed that way, protected my bank account for a long time (as did the absence of eBay).

But when Tom Derby began to broker Steve Denny’s collection of proofs and prototypes, and The Earth began to sell off a large collection of hardcopies in the late 1990s, I was suddenly buying items that I’d previously thought were objects to be written about and featured (on the Archive) exclusively -- not something you could actually own.

Prior to this, I’d wanted the stuff, but my phone calls to the numbers in Toy Shop ads were always too late (the magazine was weeks old by the time I saw it), or the source too dubious. If I’d bothered to check UseNet, things might have been very different.

Then along came the Archive forums and chat, and suddenly I was seeking advice from Chris and Ron (where previously it had been only the patient Gus’ email account that I bombarded with questions). Through these guys, the Archive was a sounding board to bounce ideas off, as well as a collecting encyclopedia.

Media has evolved a lot during the last ten years in particular. Our hobby has changed quickly as a result -- moving from mass to mess media, with the arrival of several thousand dedicated Facebook groups, more collector publications than you can shake a stick at, and an even greater influx of new blood.

In the mid 1990s, I was as active in the hobby as I am today, and used to know of around ten or so other Aussie guys. There were 2,464 members of Australian Vintage Star Wars Action Figures & Toys (1977-1985) group alone, last time I checked. Granted not all of these members are located in Australia, but a good deal are.

It's no longer just a handful of books or a single website with one reasonably reliable forum for exchanging information that informs the hobby. I don't seek advice from the hobby's pioneers nearly as often as I used to either. But the building blocks of knowledge that Sansweet’s book and the Archive provided, and lessons from the guys behind it, remain as relevant to me as they always have been.

I don't think it's a stretch either, to predict that this older media will continue to influence newer Australian (and international) collectors, as it's eventually discovered by them, just as it has been by thousands of others for over two decades now.

Posted by Stephen Danley at 9:00 AM