Recurring SWCA blog guest star Yehuda Kleinman attended the recent Toy Fair in New York and is here to break down the story on all things Star Wars for 2016.

Toy Fair 2015 was all about whispers and rumors of the upcoming new chapter in the Star Wars saga The Force Awakens, which would be coming out in December. Despite loving said whispers and rumors, there was very little merchandise to be shown and reviewed at that early stage due to the intense secrecy kept around the film's story line and characters.

Fast forward to this year's event, and every vendor that has a license to produce Star Wars toys (and even some that didn't) had Star Wars merchandise in every shape and form as far as the eye could see.

The gossip and murmurs were still around, only this time following the first "anthology" chapter of the Star Wars saga coming out at the end of the year entitled Rogue One.

I'll take you through some of the most notable and interesting vendors and their products that are either just out or coming out this year.


Hasbro has taken the challenge of Star Wars toy production to the next level this year. There were good to excellent representations of the characters and vehicles from the new film carefully packaged in the same way with characters from the prior films. This allows simultaneous play throughout all of the films with similar feeling toys that work well together. They are also sculpted in a fashion that is more true to form than we have seen in the recent past, with less articulation and exaggerated features.

There are representations in the classic 3 3/4" line for play and collecting as well as diecast smaller scale ships and larger scale 6" figures geared more towards adult collectors.

Hasbro has also embraced other classic 80s board games and toy lines with a refreshing Star Wars flair. I was particularly impressed by the Star Wars version of "Clue" that was presented. It's played like the classic "Clue" game in three-dimensional form on a Death Star. They also offered a fantastic BB-8 "Operation" game. 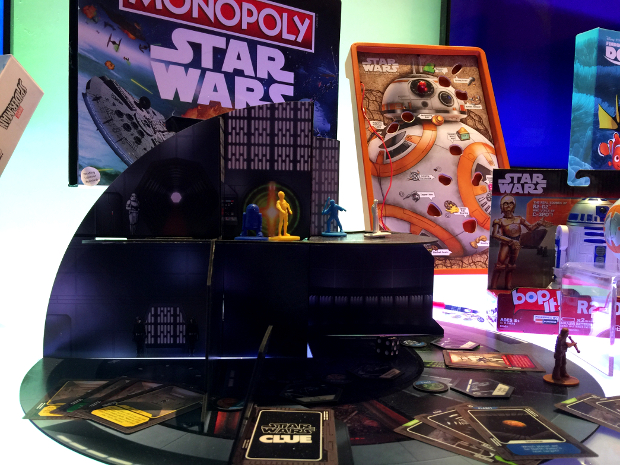 The new version of the Star Wars: The Force Awakens Monopoly game prominently featured its new Rey figure which was very vocally missed by many fans when the game was initially released without it.


LEGO continues to grow and license nearly all known major pop culture phenomena of the last half century, creating building toys at an astounding rate with detailed variation. For Star Wars this year, LEGO had an expansive display of new building toys for The Force Awakens as well as adding new building toys for the original films, just as Hasbro has been doing.

My favorite of the new offerings is their "Droid Escape Pod." It's a fun small sized building set which includes both R2 and 3PO with two scavenging Jawas. 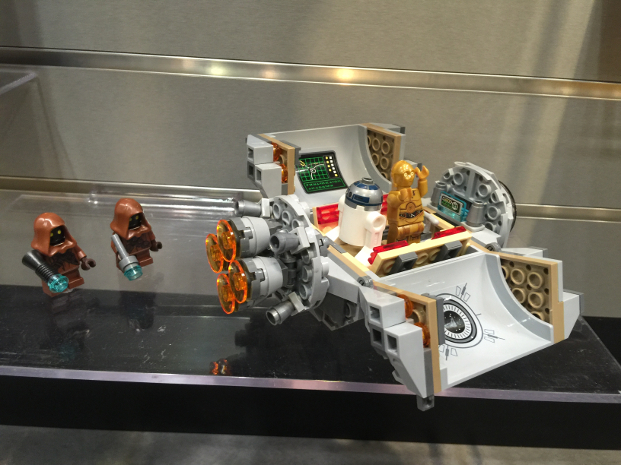 LEGO also offered an array of large sized figures which again were far more detailed in the larger scale for the collector who wants to make a more imposing display. 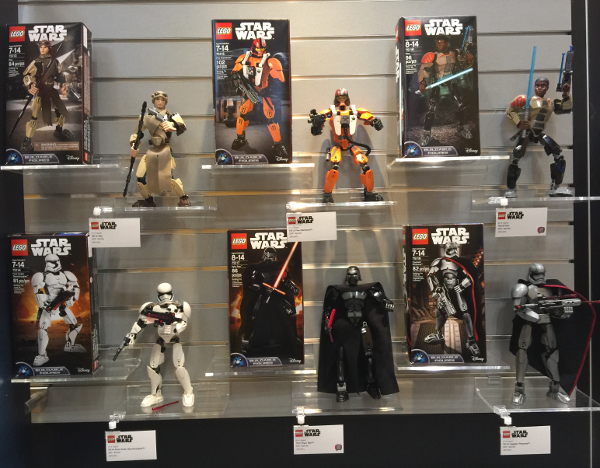 Here is a nice example of a set from the new film depicting the new General Leia figure with her transport ship and Resistance entourage. 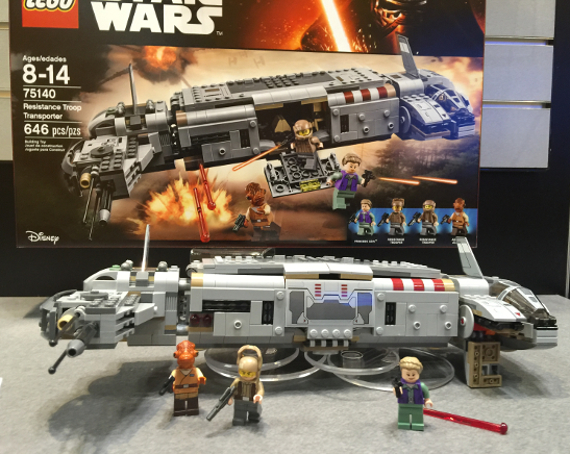 Building toys in general were very well represented this year with many options to choose from in the Star Wars universe. Revell -- the premiere toy model company -- continues to accurately represent Star Wars ships in model form to be built by fans of all ages and abilities by creating different skill set models as featured on the SWCA blog throughout this past year:
The beginner sets can be snapped together by nearly anyone of any age and have a durability that allow them to be played with. They even include working features such as lights and sound. At the other end of the skill spectrum, Revell presents the extremely complex Master sets which when assembled, visually rival ILM props.

Again always thinking ahead, they were one of the few companies who did their best to hint at what was coming for Rogue One -- within the constraints of Disney's now even stricter secrecy guidelines.

As they had done last year for The Force Awakens, they once again made mock-up boxes with no graphics or information on the box as a teaser for their new models that are being produced for the next film. This year however, the company was not allowed to add the new film's title to the mock-up boxes. So they simply say "Star Wars" with the classic logo on a black background. The sales team were still more than happy to explain what the minimalist boxes represented to anybody who asked!


Metal Earth has continued to revolutionize building toys with their amazingly detailed and accurate laser printed models. For those unfamiliar with their product line, they produce a tremendous selection of varying models from multiple properties, including Star Wars. Each set consists of two sheets of metal which have been laser cut with detailed parts that can be relatively easily removed and assembled into striking models using tweezers or needle nose pliers.

Metal Earth's new innovation this year was creating kits which had multiple colored metal parts on the same metal sheet. They will also be producing a large sized line likely later this year.


Building toy companies who were not lucky enough to obtain a license from Disney to produce Star Wars toys were not put off by demonstrating their product in a Star Wars fashion.


Sphero had the most successful launch of a Star Wars product last year with its remote controlled BB-8 toy which interfaced with the user's smart phone. This year the company has updated the product with a more worn-looking BB-8 as well as the launch of a new wristband which can independently control BB-8 without the use of a smart phone.

Below is a picture of a Sphero salesman demonstrating the new "Force" wristband which is now only in a prototype stage as a black band, but when at retail will have a nice droid-like appearance. 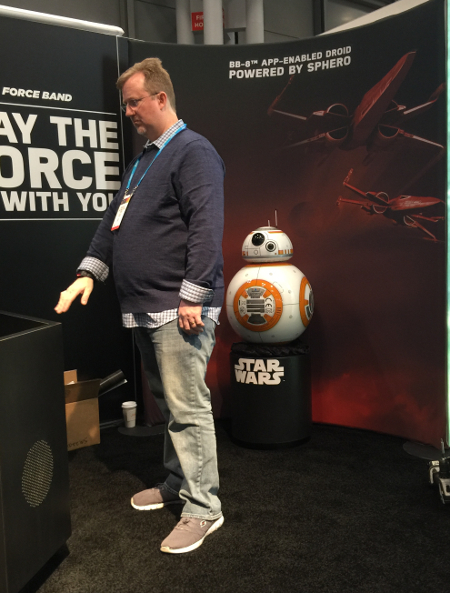 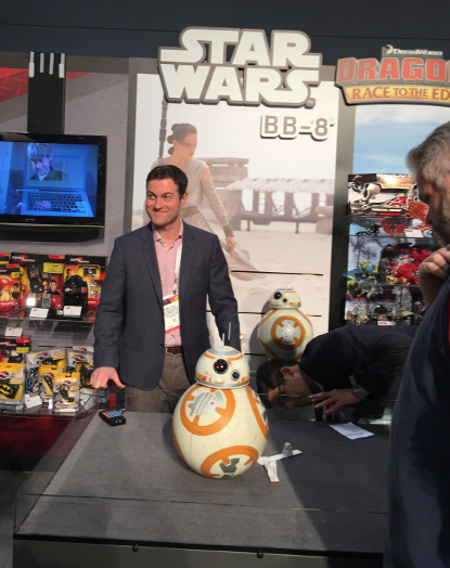 The toy is quite impressive and when it was demonstrated, it did follow voice commands with relative ease and was quite interactive with the audience. However, it still remains about 7 to 8 inches smaller than the actual BB-8 prop in order to fit on toy shelves and remain cost-effective.

Spin Master also presented a fantastic line of their Star Wars remote controlled vehicles, including the TIE Fighter pictured below which has its engine placed just behind the cockpit so that when in flight, it appears to have no significant human technology making it function. Jakks Pacific deserves a mention for their BB-8 model which, although not remote controlled, has fantastic features including lights, sounds, and a pop-out lighter to reproduce the droid's famous scene when he returns Finn's "thumbs up." 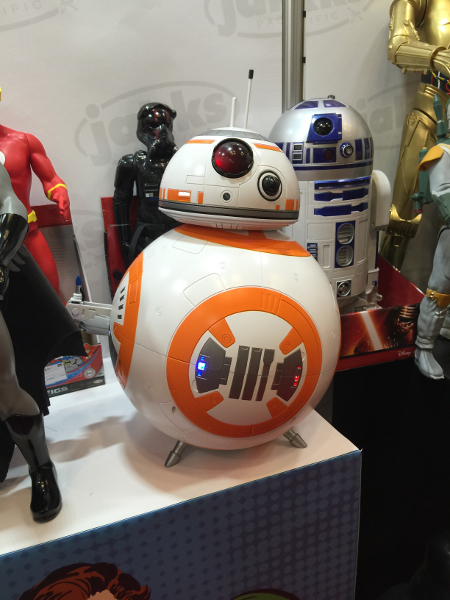 Imperial Toy followed up its successful launch of their R2-D2 bubble blowing toy with a handheld R2-D2 bubble gun, among other bubble toys that mesmerized the assembled audience. 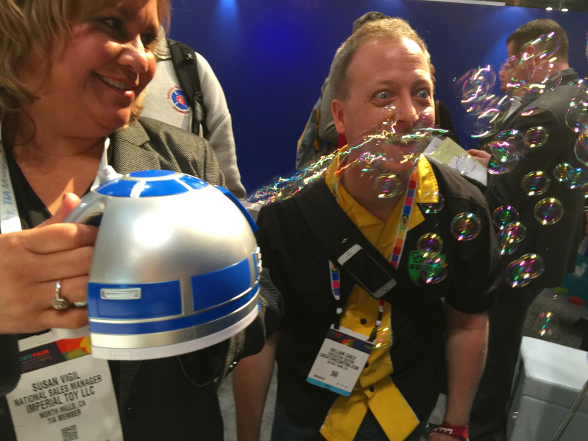 Uncle Milton -- a science-based toy company most famous for its toy ant farms -- has had several successful and fun Star Wars toys in the past including the "Force Trainer" and "Force Trainer 2" which allows the user to train with the Force through a virtual reality simulator. I really enjoyed their entry of a Star Wars ant farm this year. It's a bit of a stretch, but maybe they were trying to capture the essence of Geonosis? 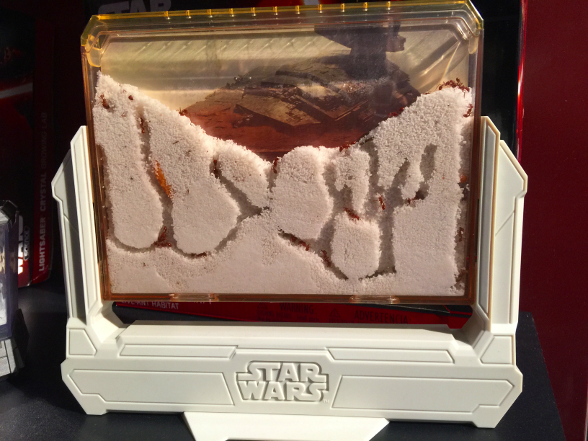 The Crayola booth displayed a unique new product, "Virtual Design Pro," which allows the user to manually color and customize different Star Wars ships and then watch them come to life on a computer screen through an interface. The toy is a nice combination of manual dexterity art mixed with new generation computer art. 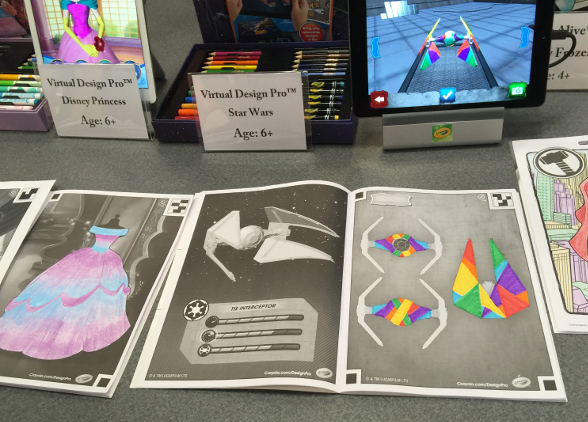 The Rouge One sign in the lower right of the Cartamundi booth (makers of Star Wars playing cards) was placed out in error with an earlier (now changed) Rogue One movie logo. The salesman stated that the reason more signs were not seen at Toy Fair carrying the Rouge One title is due to the fact that Disney has not as of yet finalized the movie's logo. 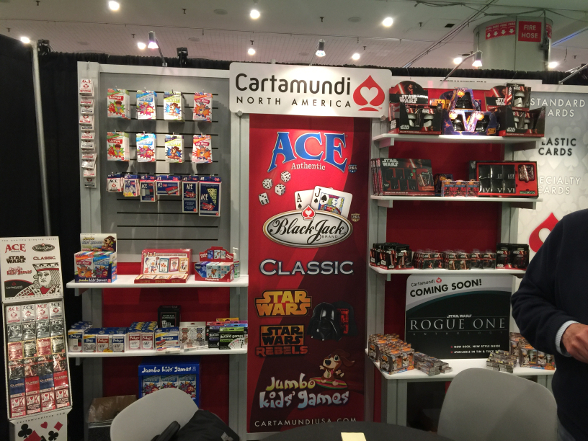 Kotobukiya -- known for its clever and well made Star Wars home goods -- premiered its new ice cube tray which makes perfectly sculpted BB-8 ice cubes. This product is an offshoot of their very successful Death Star ice cube tray, but I think the BB-8 version is even better. Also pictured are their highly detailed figures which display quite nicely. 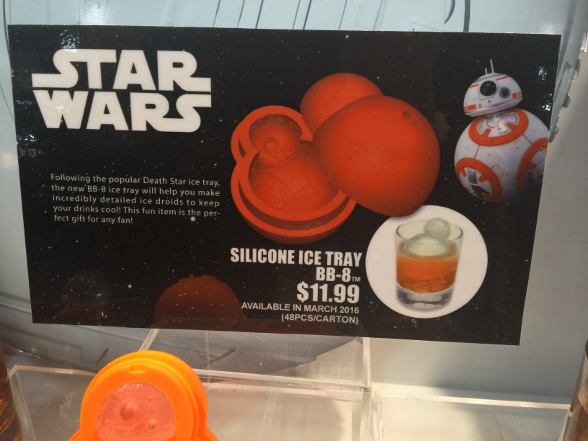 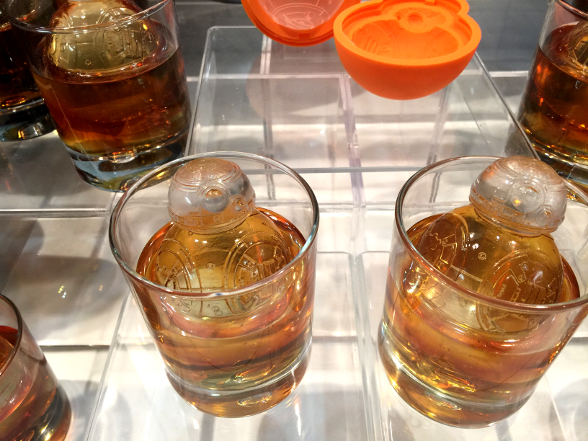 For all of our bootleg collectors, fear not! Even at Toy Fair there are plenty to be found, such as this take on the Kylo Ren tri-blade lightsaber. 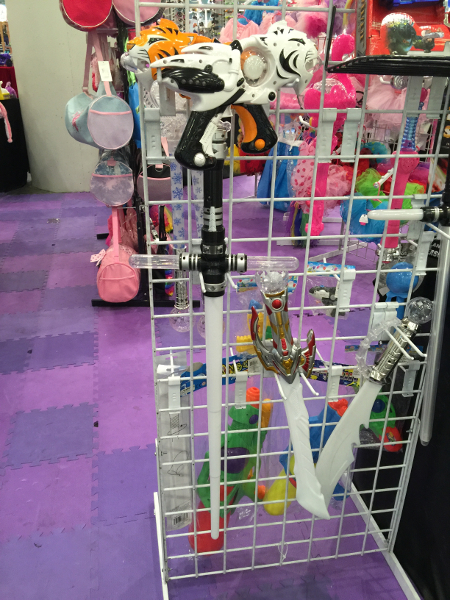 The other Star Wars news at Toy Fair was Mattel's possible future merger with Hasbro. Mattel is the second largest toy producer in the world -- only second to LEGO. While a distant second, the company is significantly ahead of Hasbro. 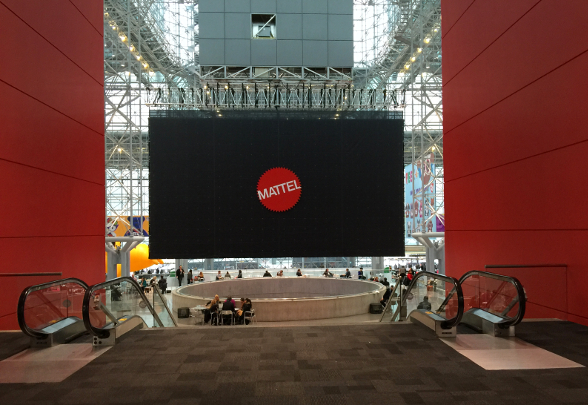 Up until this point, Mattel has been a minor player in the production of Star Wars toys, primarily focused on their license for Star Wars Hot Wheels. Below is a hardcopy for their latest Hot Wheels Star Wars track which actually looks kind of cool. 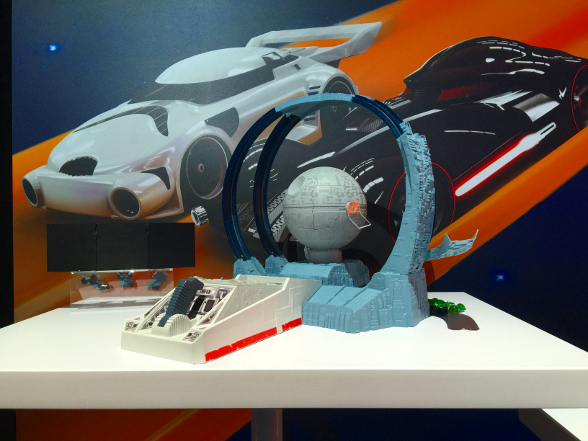 If the merger goes through, the two major producers of Star Wars toys will be LEGO and Mattel, giving way to a whole new phase in the future of Star Wars toy manufacturing. The merger is not a sure thing of course, and has been attempted in the past with some resistance by Hasbro employees who created the pin below at the time. 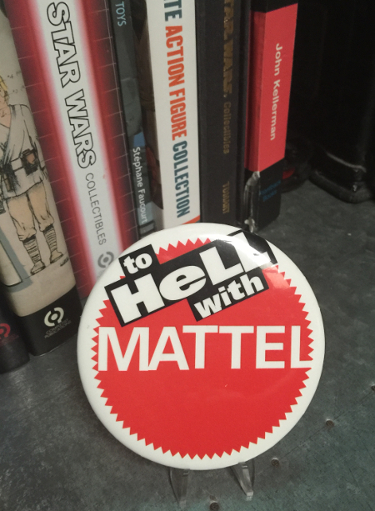 Either way, I'm sure the fans will keep them on their toes.