Old Shots of an Empty Store: A Look at the Star Tours Giftshop During the Dark Times

When one considers the tens of thousands of Star Wars related photographs out there, some of the hardest to find are shots of old merchandise on store shelves. Especially in the age before digital cameras and phone selfies, it just wasn't a regular thing. Someone might inadvertently capture some toys in the background of a family picture, but very few people deliberately take photographs inside a store. In this case though, someone was paid to do that very thing.

When Star Tours opened in 1986, it featured something that few had ever seen before. No, not just the groundbreaking technology or a Disney attraction using (at that time) non-Disney characters, it featured a theme park attraction which exited directly into a gift shop. Disney had toyed with the notion over the years, recognizing that routing guests past merchandising areas increased sales, but it was almost always a passive thing. A cart selling Haunted Mansion-themed "invisible dog leashes" in front of the entrance to the ride, or a counter which sold pirate themed jewelry near the exit of Pirates of the Caribbean, for example. With Star Tours though, Disney had the space and the willingness to turn passive subliminal marketing into a full-fledged SUPERliminal push. If you wanted to ride the newest attraction in the park, you'd have to literally walk through Disney's store to get back out. Star Tours is really the first ride where we see this idea put into action, and it was so successful that it's since become fairly commonplace in the entire theme park industry.  So common, in fact, that Disney duplicated the "exit through/near the gift shop" layout when the Star Tours ride was cloned in Tokyo Disneyland in 1989.  Or as close as they could anyway, even if it involved putting in a glass 2nd story walkway to get guests from the exit of the ride to the area of the gift shop.

However groundbreaking (or annoying) the hard-sell opportunity was, Disney wasn't alone in this deal. Because the ride was a partnership, Disney needed to keep Lucasfilm informed about the status of the ride and ensure that certain maintenance and upkeep standards were met. Given that LFL was dealing with Disney (as well as Disney's partner in Tokyo Disneyland, The Oriental Land Company), this was merely a formality. Still, periodically, someone would need to go to Disney and take pictures of how things looked. What was Disney doing with LFL's intellectual property? Were the retail spaces well maintained? Were the products displayed in a way which would inspire someone to purchase them (thus ensuing that LFL got its cut of the profits)? That's where these photos come in.

What you're looking at are internal Lucasfilm Licensing shots, taken inside the Cosmic Encounters store at Tokyo Disneyland.  They are LFL's way of keeping track of their partner in the Star Tours ride and ensuring that the retail space is being used correctly. Although the shots are undated (well, technically they are dated, but the 1989 date is clearly incorrect and was probably the result of a camera glitch), we can do a fairly good job of dating them just by looking at what's actually for sale in the store. I think we're looking at a time-frame of late 1994 / early 1995, which would only be about 5 years after Tokyo Disneyland's Star Tours opened. While that wouldn't classify them as "vintage," they still provide us an interesting view of Star Wars products available in the Dark Times before Hasbro's POTF2 toys were released. And for the Disney fans out there, these are some of the only shots of the shop you'll ever see without any guests. 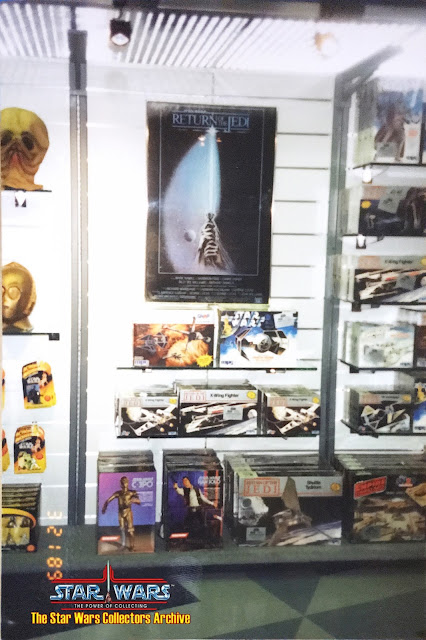 In this shot, we can see Kenner's then fairly new Action Masters line and an assortment of model kits. 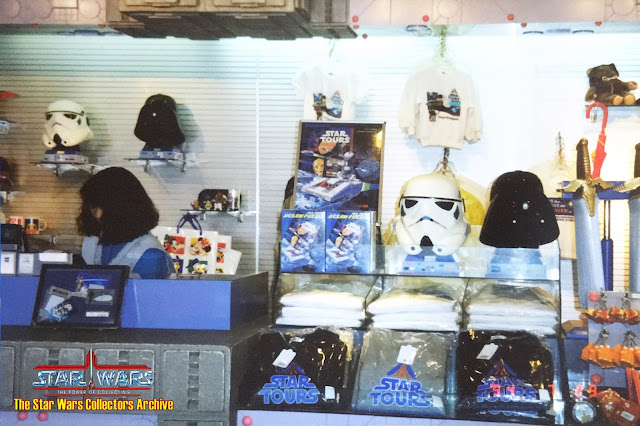 Here's a shot of the main cash register area of the store, showcasing a lot of Star Tours branded items: T-shirts, puzzles, keychains, and a plush Ewok. In the background on the right, you can see some unlicensed lightsaber-style role play toys. LFL apparently wasn't too concerned about their partner selling knock-off items like this, since there were no real licensed alternatives at the time. Although, Disney never really stopped selling this kind of thing in their parks, even after they purchased the Star Wars franchise. You can also spot an umbrella, which I assume was somehow Star Tours branded, and a child's shirt which appears to have an image and slogan related to Endor. I've never seen that shirt though, so I couldn't tell you what it says. 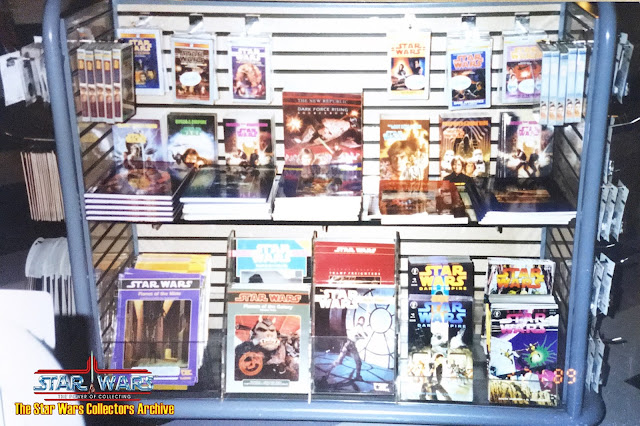 Since Star Wars merchandise was few and far between at the time, Disney had to fill its shelves anyway it could. In this case, they have a whole display of expanded universe Star Wars novels and books on tape, issues of the Dark Horse Comics Dark Empire series, and some RPG source books from West End Games. As more Star Wars merchandise became available, Disney scaled back this kind of thing and replaced it with more impulse purchase items. It's odd to envision a time when you could go on the Jungle Cruise and then immediately walk over and purchase audio cassettes of the Heir to the Empire series. But at one time, you could. 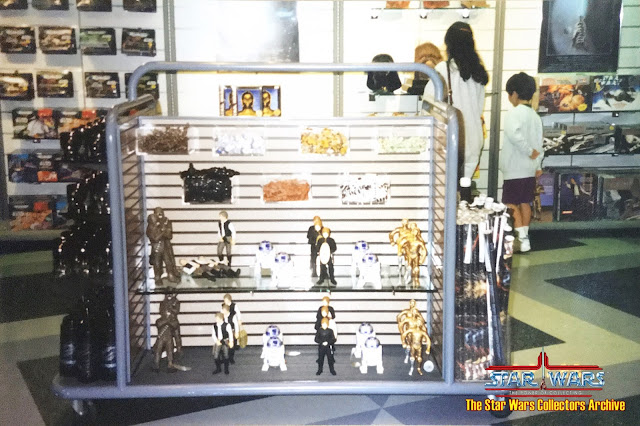 Of the photos, this one is probably my favorite. While it might be hard to make out if you're not familiar with Star Tours items, those little bins contain the ubiquitous Star Tours PVC figures: Chewbacca, R2, Wicket (from the Ewoks cartoon), Yoda, Vader, 3PO and Stormtrooper. Disney sold those little figures for YEARS. In the late 90s, when they finally stopping offering them, I remember seeing literal barrels of them for sale at Disney overstock dealers. They're still a really neat set to see complete though and they always make me smile.

Below the PVC figures, we can see some Out of Character statues. They're essentially the same as the Applause figures released a few years later, which collectors might be more familiar with. We can also see some Star Tours branded mugs on the left, and some Return of the Jedi posters to the right. In the background, we can spot the then brand-new Star Wars Micro Machine sets from Galoob. 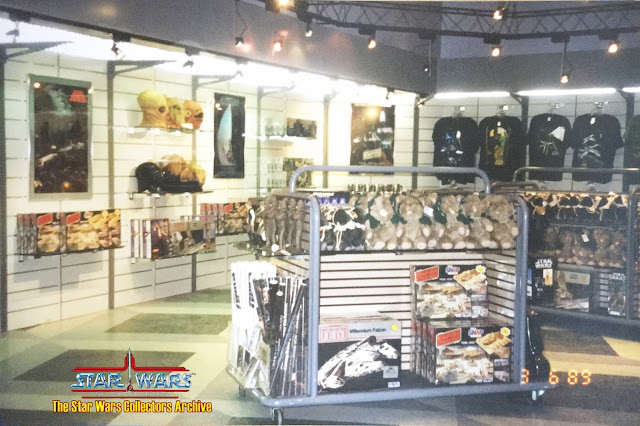 Here's a wider angle shot of the store, showcasing plush Ewoks, more models, a bunch of t-shirt designs, and some masks. On the right of the display, we can spot what appears to be the familiar shape of Kenner's vintage Darth Vader carrying case. The Star Trader shop sold a lot of vintage merchandise in the early years, from Micro Collection overstock figures to Star Wars 10th Anniversary items. If I had to guess though, I'd say that this particular case might be from the Bendems release of the case, rather than the original Kenner version. But I'm not sure, since we can't see the front of the case in this pic. 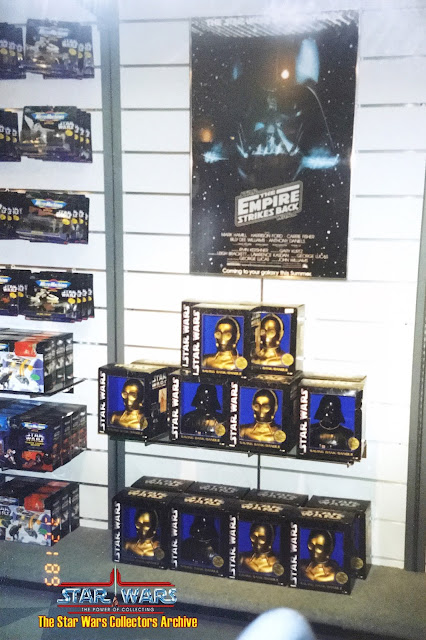 Our last image is of this display of 3PO and Vader banks, sitting below a reprint Empire Strikes Back Advance poster. To the left, we again get a little glimpse of some Micro Machines toys. You can see how new the line was when this photo was taken, because every one of their packages is in absolute mint condition. When you think about the sheer number of people walking through the Star Trader gift shop on a daily basis, you can imagine how quickly they ceased to be in such beautiful shape.

So, there you have it. A half dozen photographs taken inside a theme park gift shop 23 years ago. But if you're a fan of Star Wars toy shop pictures or old photos of Disney stores, they're an invaluable glimpse of times gone by.

If you have any vintage shots taken inside the Star Trader shop or the Cosmic Encounters shop, feel free to post them!
Posted by Tommy Garvey at 9:40 AM