In 1989, the Epcot theme park in Walt Disney World opened the "Wonders of Life" pavilion. This would be the area of the park which focused on health and the human body. Located just north of the Horizons show building (the current location of "Mission: Space"), the pavilion was a huge indoor space consisting of several different but related attractions.  Guests could race through the human body on Body Wars, which used the same ride system as Star Tours to simulate the experience of rescuing a miniaturized Elisabeth Shue from someone's blood stream. They could learn about sex from Martin Short (not a joke) in The Making of Me, a film which was so controversial to Disney's largely family audience that it required a warning sign to be posted in front of the theater. For our purposes though, we will be concerned with an often overlooked show inside the Wonders of Life: Cranium Command.


Cranium Command followed "Buzzy," the pilot of an adolescent boy's brain (called "the most unstable craft in the fleet"). Guests met Buzzy in an animated pre-show, then were ushered into a theater with different screens forming the shape of a human head.


It was Buzzy's job to listen to the various organs of the body (mostly played by SNL comedians of the era) being projected onto those screens, and make command decisions.

The goal was to teach guests how complicated the human body was and how hard your brain has to work in order to function. In other words: this was the attraction you sat through while your older brother or sister was having fun riding Body Wars.

While the attraction is largely forgotten by most people today, there was one aspect to it which should interest Star Wars fans. When Buzzy was boarding his human head in the animated pre-show, his commanding officer dumped all of the things young boys liked inside it. Among them: Coca-Cola, Ariel the Little Mermaid, swimsuit magazines, dinosaurs, candy, the space shuttle, and little images of an X-Wing, R2-D2, Stormtrooper, an AT-AT, and C-3PO. 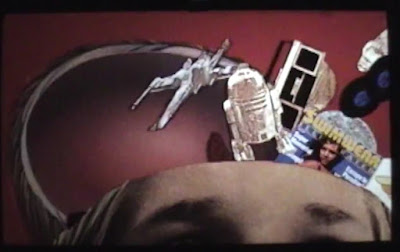 It's important to remember that this ride opened in 1989, during one of the darkest periods of the Dark Times between the Original Trilogy and the release of the Special Editions. Adding Star Wars imagery to things was by no means a regular occurrence. This was the first time Star Wars had appeared inside a Disney ride since Star Tours opened 3 years before at Disneyland, and was the franchise's first appearance inside a Walt Disney World attraction (WDW's version of Star Tours wouldn't open for a few months more. (Although, technically 3PO and R2 appeared on the hieroglyphics wall inside the Indiana Jones scene in the Great Movie Ride, which opened a couple months before Cranium Command, but that was in the actual Indy movie, so it's debatable if it was Disney adding it on its own or merely presenting the scene as LFL filmed it.)


So, you can find Star Wars references in the oddest of places.

After years of only operating seasonally, Cranium Command closed its doors forever in 2007, along with the rest of the Wonder of Life pavilion. These days, the building usually sits entirely empty except for a couple months a year when it's used for Disney's Flower and Garden Festival. The Cranium Command theater is still there though, empty and silent. But it spent 18 years filling young boys heads with images of Star Wars.

If you'd like to join Buzzy and his friends, you can watch footage of the ride here.