Wonder No More: The Star Wars Bread Promotion of 1977

I visited Jonathan McElwain in the summer of 2016. I can assure our readers that he has one of the best food-related collections out there. Consequently, I'm happy that he's agreed to share some of his knowledge in a blog post devoted to the Wonder Bread promotion of 1977. Let's hope he'll return in the future with some additional posts about this fascinating area of Star Wars collecting.

One of the earliest food promotions for Star Wars involved a set of trading cards distributed inside bread bags. Commonly known as the Wonder Bread promotion, this promotion involved at least two brands of bread, but more on that later. 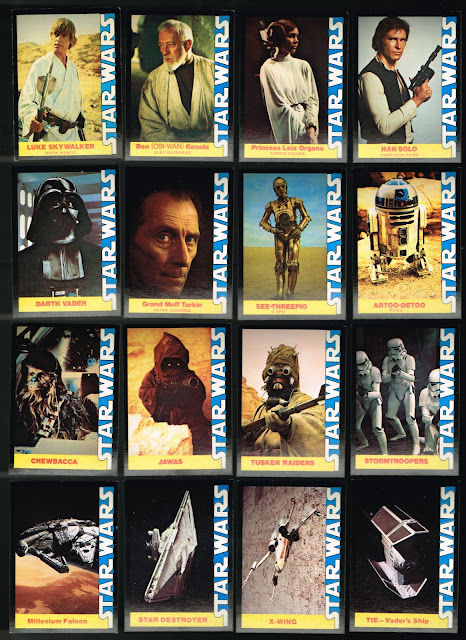 The premium involved in this promotion was a set of sixteen trading cards. The card fronts feature now familiar marketing images bordered in black, while the plain white backs include the card number and a brief written description. Twelve of the cards featured characters, while the other four cards featured ships. Interestingly, some of the character cards include the actor’s name below the character’s name, while others don’t. The named actors correspond with those who received billing on movie posters and other promotional materials (Hamill, Ford, Fisher, Cushing, and Guinness). There is nothing on the card fronts or backs to identify their association with the bread promotion, but each card bears a 1977 Twentieth Century-Fox Film Corp., Inc. copyright on the back. 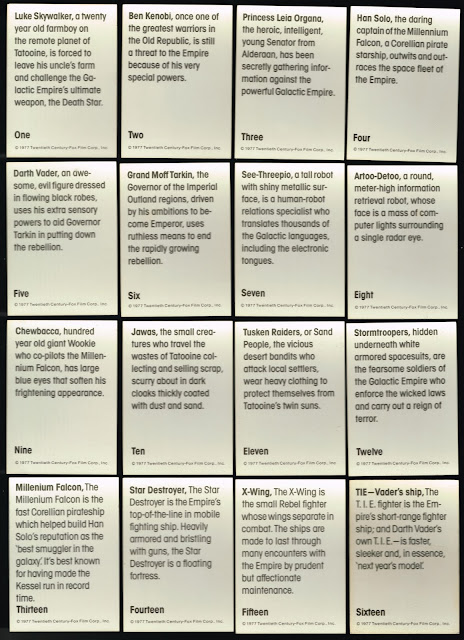 In Star Wars: From Concept to Screen to Collectible, Steve Sansweet shares that “Star Wars trading cards were stuck in more than sixty-five million loaves of Wonder Bread.” That is a pretty staggering number when you consider the short-lived nature of the promotion and the fact that the population of the United States was somewhere in the neighborhood of 220 million people in 1977. Sansweet goes on to say that “General Mills promoted Star Wars cups, kites, cards, and stickers on twenty-five million cereal boxes.” Based on these numbers, the bread promotion dwarfed all of the cereal promotions from this early time period combined.

The bread promotion was tied into a larger promotion that involved the giveaway of an awesome customized Star Wars Toyota Celica.

According to Star Wars: The Original Topps Trading Card Series, Volume One -- specifically the Afterword authored by Robert V. Conte -- Twentieth Century-Fox was anxious to propel the domestic box office numbers for Star Wars past the $200 million dollar mark before the end of 1977. According to the same source, the licensing fee was waived in exchange for a commitment to have the bread cards on store shelves by late September of 1977. The expiration dates printed on surviving bread wrappers range from early October to early November, so it seems likely that the commitment was met (or very nearly so). 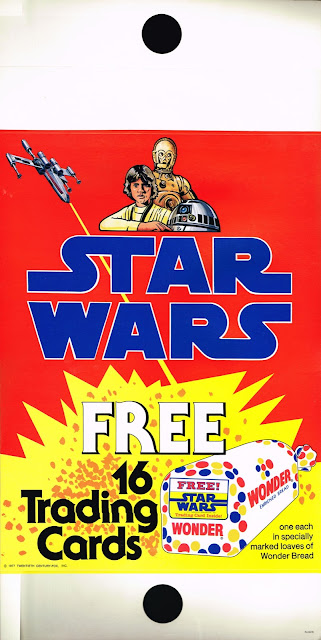 The cards were distributed inside bags of bread, one card per bag. The cards were inserted directly into the bags, without any sort of wrapper to protect the card. To this day, the cards remain plentiful, inexpensive, and readily available in nice condition. This availability most likely stems from the later unauthorized additional print run(s) that Fox was combating. 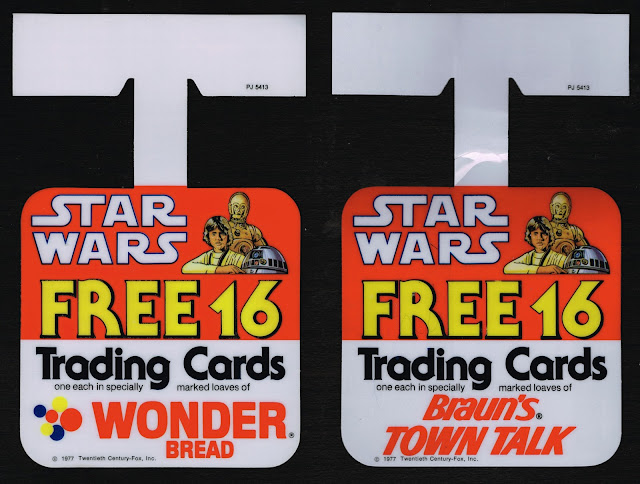 As alluded to earlier, there were at least two brands of bread involved in this promotion: Wonder Bread and Braun’s Town Talk Bread. Both brands were, at the time, owned by ITT Continental Baking Company, Inc. Wonder Bread was widely available throughout the United States as a popular enriched (fortified) white bread. Although ownership has changed in the ensuing years, Wonder Bread remains on store shelves in the USA today. Braun’s Town Talk Bread was a popular brand of white bread available in the Pittsburgh, Pennsylvania region. It is possible that there were other regional bread promotions, but I’m not aware of any evidence of this.

The bread bags (wrappers) are collectible and quite scarce, in comparison with the plentiful bread cards. Saving bread bags wasn’t unheard of at the time. My parents re-used them to line our not-so-waterproof snow boots. Whether re-used for some utilitarian purpose or not, the vast majority of bread bags were promptly tossed out with the rest of the garbage.

There are many known variations of the bread bags (wrappers) for the obsessive collector to pursue. These variations include differences in varieties, sizes, ingredients, printing characteristics, numbering, and union labeling. 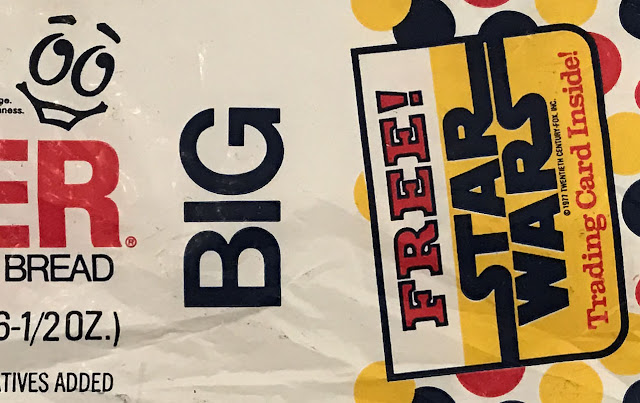 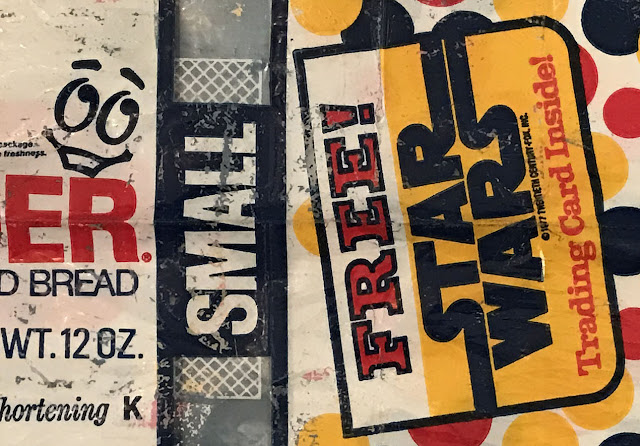 - Sizes: Many of the varieties were available in several different sizes (weights) and, overall, the breads ranged in weight from 12 to 30 ounces. 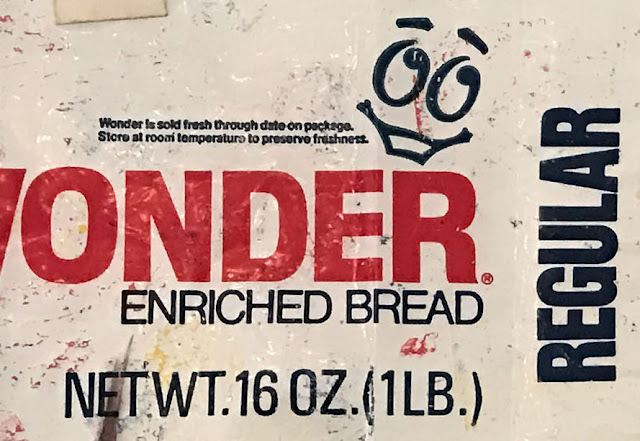 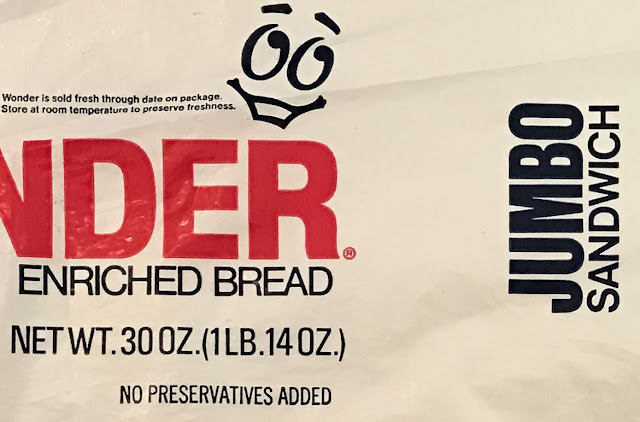 - Ingredients: While the basic recipe for Wonder Bread is consistent, a few of the ingredients in the bread loaves vary. While many of the wrappers tout that there are “no preservatives added,” some of the wrappers lack this marking and these breads utilized calcium propionate as a food preservative. Several wrappers are for Kosher bread. The Kosher bread used vegetable shortening, unlike the rest of the breads which used lard for shortening.

- Printing Characteristics: The majority of bags are mostly white, subdivided into about an equal split of bags with printing applied to white plastic film and bags with printing applied to clear plastic film. A couple of the bags note that Wonder Bread is the Official Bread of Disneyland. These bags are certainly one of the earliest Disney/Star Wars cross-promotional items. 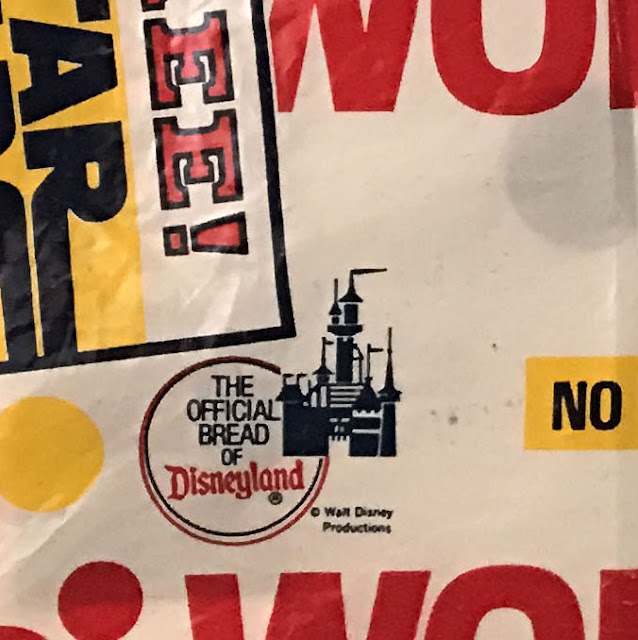 - Numbering: The wrappers have small identifying numbers on the back sides of the wrappers, just below the nutritional information. These numbers may represent different bakeries. However, it seems more likely that they represent a region or possibly different printers. The numbers on known wrappers are 00113, 00118, 00125, 00127, 00138, 00140, 00401, and 00700.

- Union Labeling:  Many of the wrappers bear the seal of the Bakery & Confectionery Union, but some lack this labeling meaning, presumably, that those loaves were produced by non-unionized bakers. 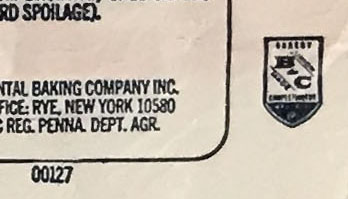 I am aware of 20 different Wonder Bread wrappers, but with so many variable attributes, there are surely more variations to be found. There most certainly would have also been Braun’s Town Talk bread bags that touted the inclusion of the bread cards, but the limited distribution of that regional brand compounded with the disposable nature of bread wrappers has made finding them elusive.

There are also some attractive store displays associated with this promotion. The Wonder Bread shelf talkers and danglers are quite common, as far as vintage store displays go. The pole sign is a bit less common, while the poster is much less common. Shelf talkers, danglers, and posters do exist for the Braun’s Town Talk brand, but are much tougher to track down than the companion Wonder Bread displays.
Posted by Ron at 7:00 AM