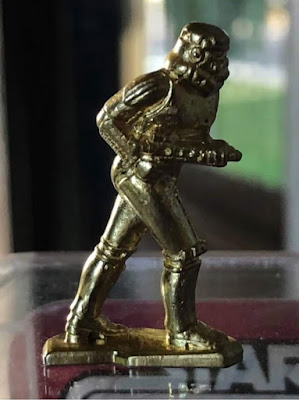 The full thread can be found here:
Gold Micros

Further reading on the Archive:
Micro Collection Prototype gallery on the SWCA

As you might recall from our last issue, there is a series of auctions on eBay for replica prototypes which claim to be made by a former Kenner employee. This does not appear to be the case, but whether it is or not is ultimately immaterial. The bigger issue is the danger unmarked replica items pose to the hobby. The Rebelscum vintage community discusses the issue.

The full thread can be found here:
Perfect Example of Repro Dangers

The Blue Harvest and Fake Prototypes 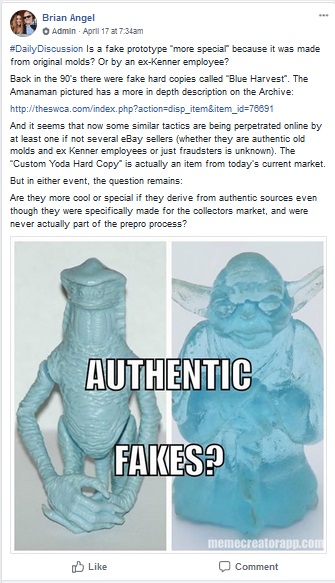 The Empire Strikes Back vintage collecting group discusses whether or not a connection to an original employee makes reproduction prototypes more exciting. The fake prototypes auctions on eBay are compared to the Blue Harvest pieces of the 90s, and collectors debate the differences.

The full thread can be found here:
Fake Prototypes

A Limelight Worth a Look 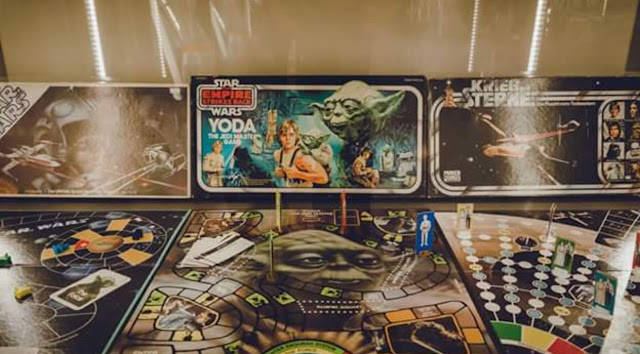 Kenner produced a line of Star Wars-themed board games throughout the vintage years which are often under-appreciated. A collector from Echo Base shares a picture of three different board games with their contents displayed showcasing their colorful game boards and detailed artwork. Check out the further reading for Ron Salvatore’s comprehensive review on Vintage Star Wars board games.

The full thread can be found here:
Vintage Star Wars board games

Further reading on the Archive:
All the Appeal of the Movie (or Some of it Anyway): Vintage Star Wars Board Games
Board Game Adventures
Board games listed in the Archive Database

Sometimes you get so used to seeing something that you don't even see it anymore. In this thread from the Jabba's Court group, the community discusses discoveries they've made about vintage action figures, which should have been obvious to them but weren't.

The full thread can be found here:
Things you never noticed

Revenge of the Jedi AT-AT Boxflat with Conceptual Logo 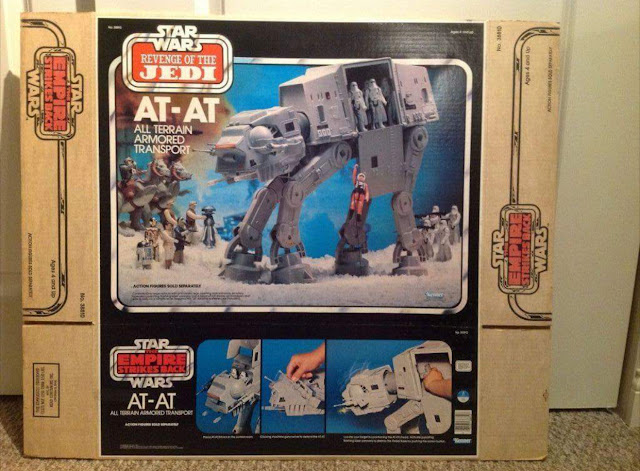 The full thread can be found here:
AT-AT mock-up 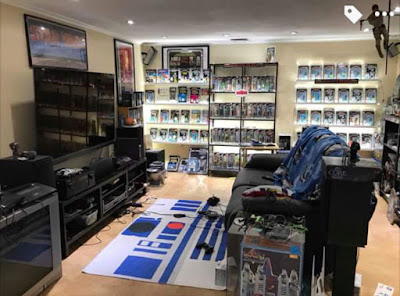 Meet a natural born collector. A native of Chicago, Mac was born into a family of collectors and antique dealers. He has been collecting vintage Star Wars with enthusiasm his entire life and shares his travels and collection this week on Echo Base.

The full thread can be found here:
Collector Spotlight 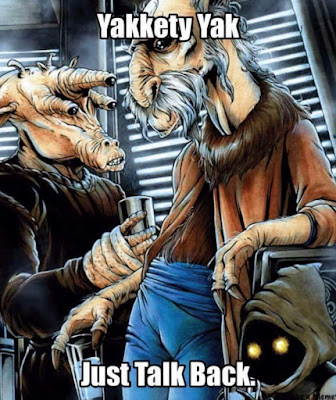 The community discusses the difference between a custom figure, a reproduction figure, and a forgery. The importance of marking reproductions as copies in an indelible fashion is also reviewed this week in Jabba’s Court.

The full thread can be found here:
Replica Figures 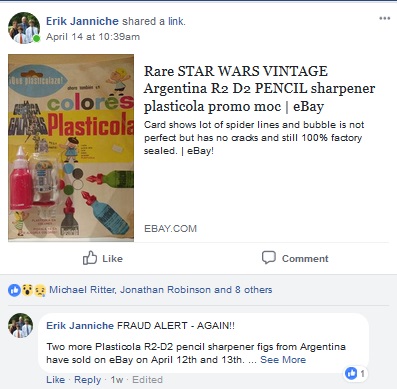 It's not every day that someone fakes an entire line of Star Wars toys, but that's what happened here. A well-known scammer from Argentina faked these Plasticola Star Wars pencil sharpener sets and they've been turning up on eBay lately. Thankfully, the community was warned about the fakes and expert collectors from Argentina confirmed that the toys are not genuine.

Further reading on the Archive:
Fakes gallery on the SWCA

Estes Rockets for a Galaxy, Far Far Away... 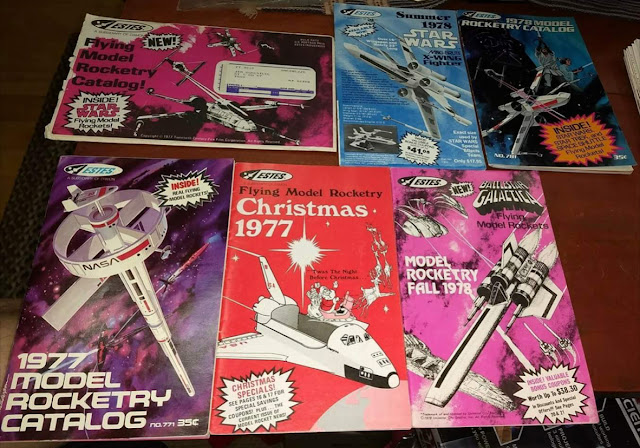 Estes Industries, a producer of reliable model rockets, produced an assortment of fun licensed Star Wars themed rocket kits throughout the vintage years. A collector makes a find of an assortment of rare Estes rocket catalogs featuring their Star Wars line in this thread on the 12 Backs group.

The full thread can be found here:
Estes Rocket Catalogs

Further reading on the Archive:
A Match Made in the Heavens: Star Wars and Estes Model Rockets
Estes listings in the Archive Database
Estes 'Flying Model Rockets' TIE Fighter vs X-Wing Poster 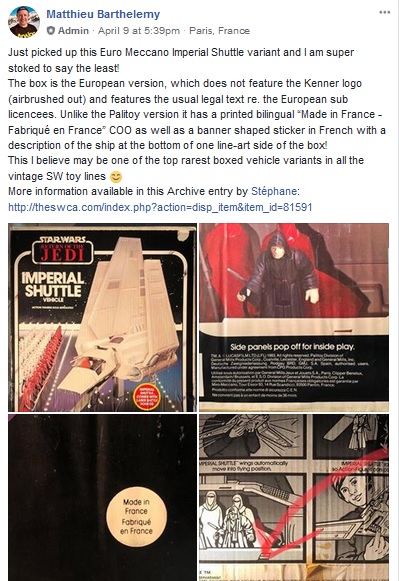 There are few vintage vehicles as visually impressive as the Imperial Shuttle. It is usually on most collectors' want lists, thanks to its awesome styling, impressive scale, and expensive price point. The European version of the box ranks as one of the rarest vintage variants around though, and one of them was recently found. Since it's only the 2nd confirmed example of this version of the box, this is an amazing discovery!

The community discusses which podcasts they should be listening to for vintage Star Wars news and discussion.

"...A Stupid Descent into Cutesieism"

Before Jar-Jar. Before Rose. There were Ewoks. While it may surprise newer fans and collectors, there existed a time when the stupidest and most irritating thing the Star Wars franchise ever created were the furry denizens of Endor. Many fans HATED them. They would get into long debates over just how annoying they were, and how they were nothing but a cash-grab by Kenner and LFL. For some, they destroyed their childhoods.

While the fandom still has a certain amount of dislike for Ewoks, they've mostly mellowed on them. I would hypothesize that as more collectors who were born in the post-ROTJ years enter the hobby, the Ewoks became just as much a part of the saga as Darth Vader or any of the things that the people who grew up in the ANH years cherished. Some people's childhoods weren't ruined by Ewoks; for some, their childhoods were Ewoks and Ewok toys.  Of course, the softening of vitriol towards the Ewoks could also be because newer and more insulting examples of terrible writing have come along to take the brunt of the uncontrollable Nerd Rage (looking at you, The Last Jedi). But either way, in 1985 Return of the Jedi was still fresh in everyone's mind and the Ewoks cartoon show was just around the corner. Ewoks were taking over the entire franchise. As such, if you signed onto ARPANET and visited the net.sf-lovers newsgroup, you would probably have found at least one thread very much like this one.

In retrospect, fans of 1985 didn't know how good they had it.

The full thread can be found here:
"cute" Ewoks
Posted by Tommy Garvey at 12:20 PM