Build a Display Island for Your Collection

Back in 2018 I built a display island in my collecting area.

I'm sure you're picturing me leaning against my display island while eating Grey Poupon straight from the jar using a caviar spoon.

Bougie or not, a few visitors have asked me for instructions. They've experienced the allure of the display island and they want one of their own. So I figured I'd do it in a blog post.

First, here are a few photos of the island. 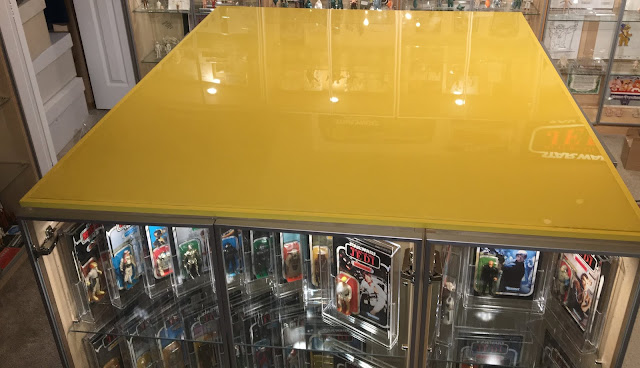 It has glass display doors on each side and a flat area on the top. The latter is painted and covered in acrylic. 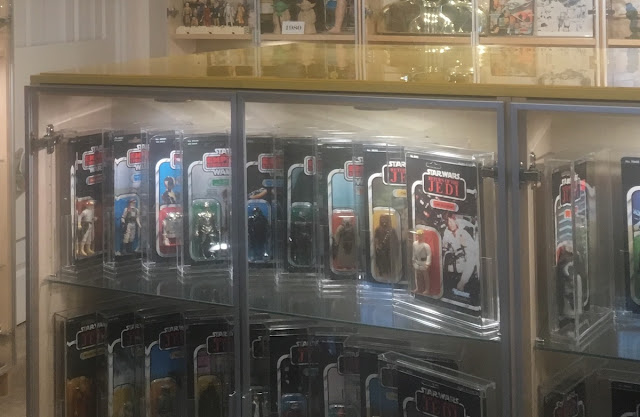 The cases are lit so that the items they contain are easily viewable. As you've no doubt noticed, I have carded figures in mine. You can put Funko Pops in yours, or whatever other dumb thing you collect. It's really up to you.

This yields an island is that is approximately 52.5 inches long and 46 inches wide.

I had initially planned to use two 31.5-inch-wide cases on the front and back. That is, no 15.75-inchers. Alas, I didn't have the room to accommodate two of the larger cases. Maybe you do?

Of course, you can also forgo the second case on the front and back, and simply bolt together four 31.5-inch-wide cases. This will result in an island that is substantially thinner.


Now, if you're familiar with IKEA's Billy line of cases, you know that, like pizza and monster trucks, they're endlessly customizable. You also know that, if you want them to be serviceable as display cases, you need to outfit them with glass shelves and LED lighting, both sold separately.

Oh, and you need doors.

Although IKEA sells a traditional glass door for the Billy, you'll want to avoid that and go with the Morliden door. The trad glass door has an obtrusive wooden frame that will harsh your mellow.

Although the Morliden is shown on IKEA's website with fogged glass, the fog effect is generated by a chipboard insert that attaches to the door's interior. If you ditch the insert, you're left with a clear glass door with a thin aluminum frame -- nice for display purposes.

Here, off the top of my head, is a list of materials you will need to build your display island:
After you buy the stuff from IKEA, you can begin assembly. To do this, follow the instructions provided by IKEA. You'll want to assemble each Billy, then install the lighting, and then arrange them into the desired configuration. You can worry about the shelves and the doors once everything is bolted together.

For the bolting, use corner braces at the corners and mending plates at the joint areas between the two cases on the front and back. These are easy to screw into the unfinished backsides of the particle-board horizontals at the spots where they meet.

Once bolted, you should have a solid rectangle of cases with a void in the center into which the wiring for the lighting is dangling.

The wire extending from each light needs to be inserted into IKEA's Ansluta transformer.

Here are step-by-step instructions for obtaining the Ansluta:
Two six-input transformers should work. Remember that you also need power cords to connect the transformers to an extension cord. IKEA sells those.

All of that unsightly electrical stuff will be inside the island. Meaning you'll need to run the extension cord out of the island and into a power strip. Be strategic here. What you want is a straight line running to a power strip that is concealed somewhere against the wall. 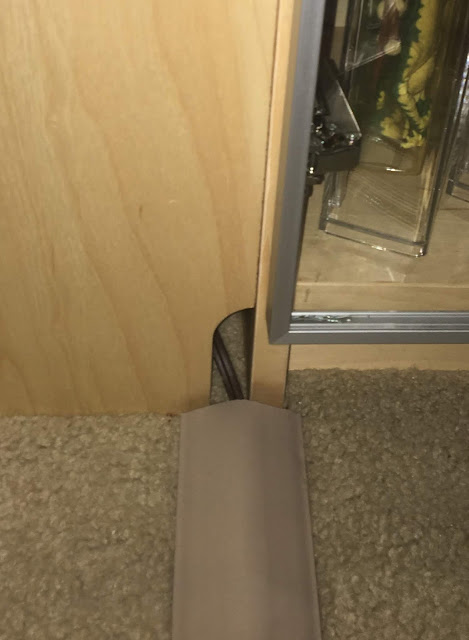 I initially thought that I'd need to drill a hole in the base of one of the cases in order to run the cord to the wall. Fortunately, each Billy has a notch in its back to accommodate a baseboard. Perfect!

Use an overfloor cord protector to cover the cord and prevent your homies from tripping.

You can also try running the cord beneath the floor and up to the power strip against the wall. But that's some real Bob Vila sh*t and possibly not worth the effort for Funko Pops. 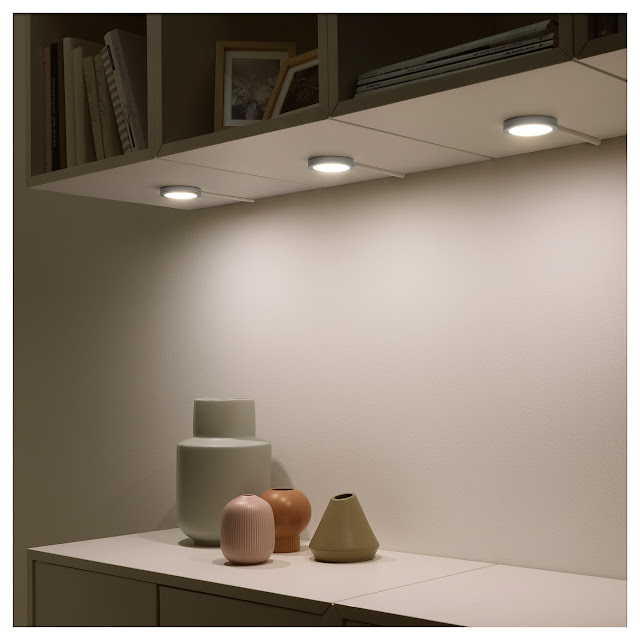 You'll now want to test the lighting setup to ensure that it works. Leave the switches on the IKEA power cords in the "on" position, so that everything lights up when you flip the switch on the power strip.

When you turn it on for the first time, be sure to say something like "By the power of Grayskuuulllll!" or "You've released the fookin fury!" just to set an appropriately momentous tone. And maybe play "The Final Countdown" by Europe.

Now for the top of the display island.

You'll want to go to Home Depot or Lowe's or whatever big-box outfit has put mom-and-pop hardware stores in your area out of business. Get a large piece of medium density fiberboard (MDF) cut to fit the top of your island. They'll cut it for you right there at the store.

On the above list of ingredients I linked to a piece of MDF that is .75 inch thick. I think the one I have is .5 inch thick, but I don't see that on Home Depot's website. Whatever. Go to the store and choose something that works for you. Try not to offend anyone like you did at IKEA.

You'll also want to get some paint. 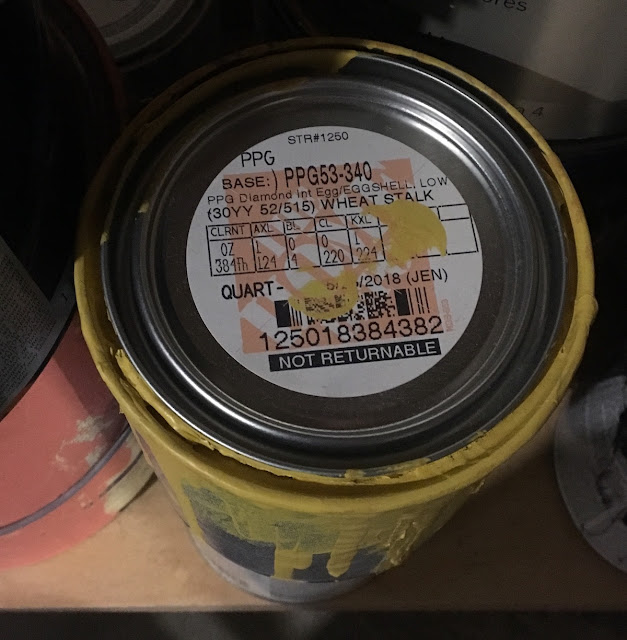 The paint I used is a Glidden-brand variety called Wheat Stalk. It's pretty close to the color used on the back of Kenner's Return of the Jedi blister cards.

Prime the MDF and cover it with a couple of coats. You can then put the board on top of your Billys to see how it looks.

I originally planned to make the top of my island removable, so that I could store things in the interior and easily access the lighting stuff in the event of a problem. Unfortunately, after I painted it, it warped slightly, causing the corners to rise in an unsightly way. So I ended up drilling it into the cases using some wood screws, then covering the screw heads with wood filler.

You can also buy this at Home Depot. Comes in large sheets. Cutting it is dicey, though. Home Depot doesn't want to do it for you. Though they claim it can be cut using a scoring knife and lots of patience, I didn't fare too well when I tried it. I recommend having a professional cut it for you.


I got the idea for the color effect from this home-improvement article. What you want to do is paint one side of the acrylic the same color as the MDF. The painted side will then be affixed to the MDF using clear silicone caulk. When it's done, the unpainted side will appear glossy and bright.

I recommend using a conservative amount of silicone with a slight amount of weight applied while it's curing. I used a lot of silicone and also weighted the acrylic with quite a few books. When the weight was removed, the acrylic rebounded slightly, resulting in a few chips in the paint. Annoying, but not very noticeable. Anyway, I don't think a lot of adhesive and weight are necessary.

At this point your display island should be complete. The only question is: What do you display on it?

C'mon, you're a Star Wars collector with a big collection. You're basically a hoarder who gets things graded. I'm sure you'll figure something out. 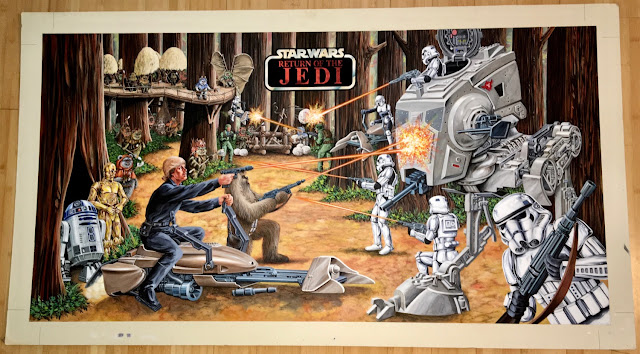 In my case, I used the island to highlight one of the largest items in my collection, the piece of art I wrote about here.

A good idea in theory, but more difficult to realize than you might imagine. I asked a few folks in my area if they could build a rig that would hold the art upright on the island. No dice. Most seemed to think the idea was maybe a little wacky.

Okay, I guess the idea was kind of wacky. Still, I couldn't get the idea out of my head. I needed to see that art on top of the island!

So I was happy that, when I mentioned the idea to my friend Tom Derby, he immediately said, "Oh, that's easy. We'll build a case. Just let me know when you want to pick it up." No hesitation or anything. Awesome!

But Tom is in Atlanta. I'm in New York. That's a two-day trip each way by car. I gotta pick this thing up and haul it back. 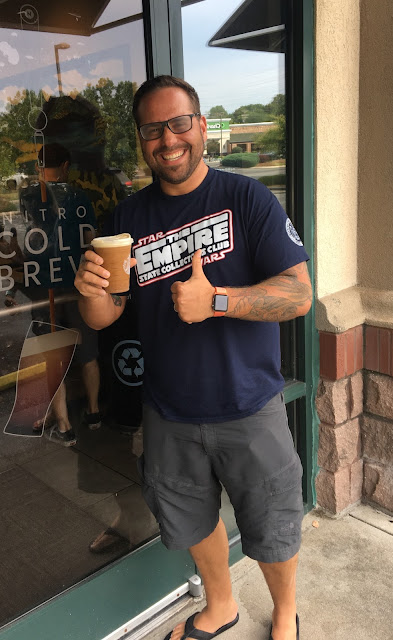 Luckily, I was able to con some friends into chauffeuring me down there. My feet up the whole way, like I was Richie Rich or something. I even conned some other friends into meeting us at Tom's. And then I conned Tom into taking us out to dinner. Man, what a racket! 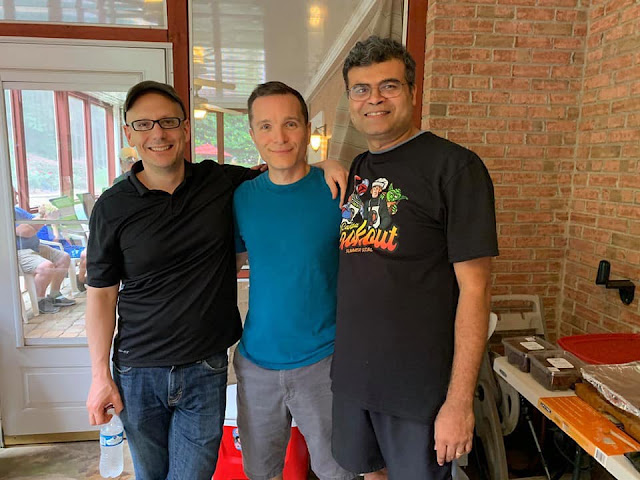 I had a great time driving down with Chris and Stephanie Riehle. We spent a couple of nights with Chris and Sharon Georgoulias, and we got to see several collections and lots of friends. We even crashed a meeting of the Georgia Alliance of Star Wars Collectors that was hosted at the home of Narayan Naik. Great people. 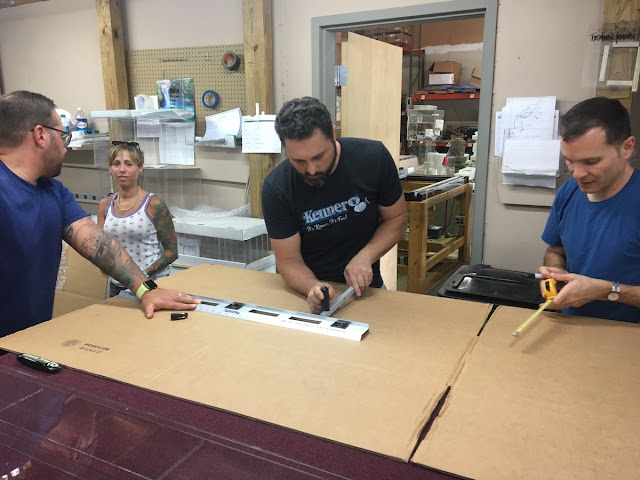 Here you see Tom and the Chrises calculating what it'll take to safely pack this beastly case.

Chris G. is an engineer and Chris R. builds stuff, so best not to get in their way while they're measuring crap. Best to just sit back and sip a wine cooler while taking photos of everyone else doing the work.

In the photo, you can see that Stephanie is marveling at my ability to get people to do stuff for me.

Geez, we kinda got sidetracked, didn't we? This was supposed to be a blog post about building an island to display your Funko Pops, and I've gone and turned it into some kind of personal reminiscence combined with a primer on how to exploit your friends.

Whatever. It's not like your time is worth wasting.

What would you be doing if you weren't reading this, writing fan mail to the Knights of Ren?

I suppose the only way to end this post is with a photo of the final result. I'm pretty happy with it. 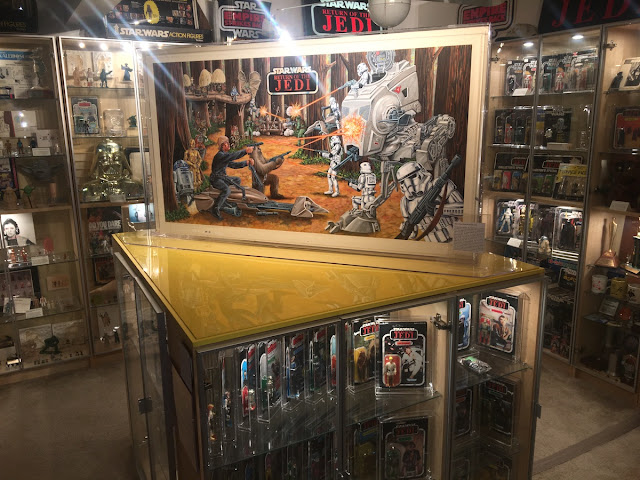 Good luck building your island.
Posted by Ron at 8:07 AM