Cake technology has advanced mightily since 1977. Have you noticed? Last year, my buddy and frequent SWCA blogger Yehuda Kleinman threw a party at his place in Queens. He served a Yoda cake that looked so much like Yoda it would have fooled Frank Oz. I have no idea what goes into producing a cake like that, but I know it's a professional-level task. It's certainly not something your average '70s mom was likely to take on between packs of Parliaments and episodes of Days of Our Lives. This article by guest blogger Jonathan McElwain takes us back to a more innocent age of cakery, an age during which a kid would be happy with an R2-D2 cake that looked less like a character from Star Wars than a piñata designed by Joan Miró.

Collecting can lead you down some strange paths. Collecting back-issues of 40-year-old cake decorating magazines is one of them. Mail Box News (later known as Mailbox News) was a long-running monthly magazine for cake decorating enthusiasts published by Maid of Scandinavia from Minneapolis, Minnesota. During the Original Trilogy era, Mail Box News featured color covers with black-and-white interior pages.

Mail Box News regularly featured cakes that were decorated by their readers and submitted for publication. In the late '70s and early '80s, many Star Wars-themed cakes were included. Most of the cakes featured in this blog post predate the licensing of cake and confectionery products to Wilton Enterprises in 1980.

This funky three-dimensional R2-D2 cake was the cover story in March 1978: 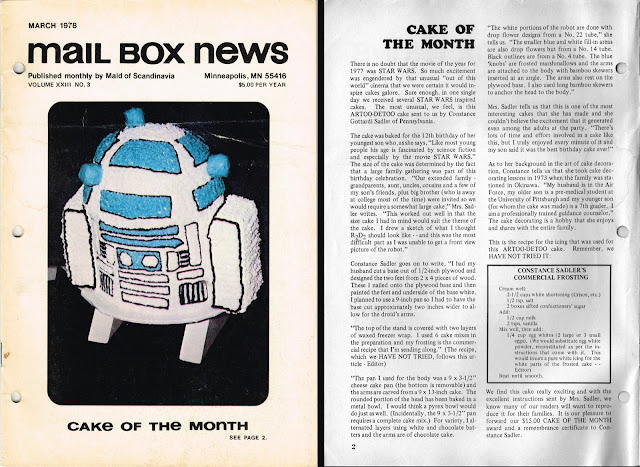 A more realistic R2-D2 is represented on this cake from the July 1979 issue. Look closely and you’ll see a Kenner R2-D2 action figure standing guard on the upper right-hand corner of the cake: 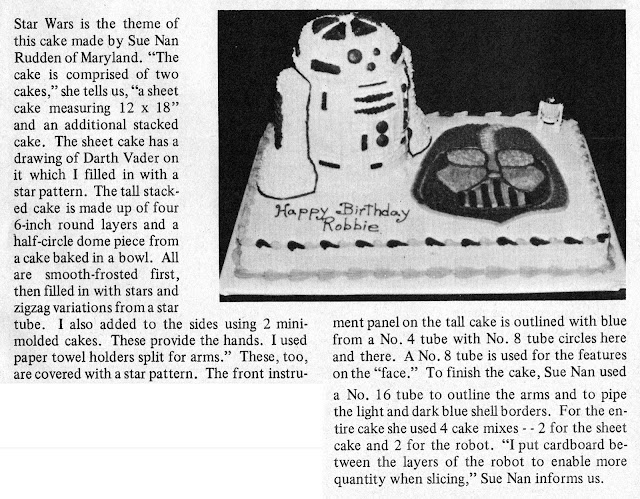 R2-D2 is featured on most cakes in this group from July 1979. The cake in the lower left-hand corner of the group separates R2’s appendages into both arms and legs, much like this Dutch bootleg: 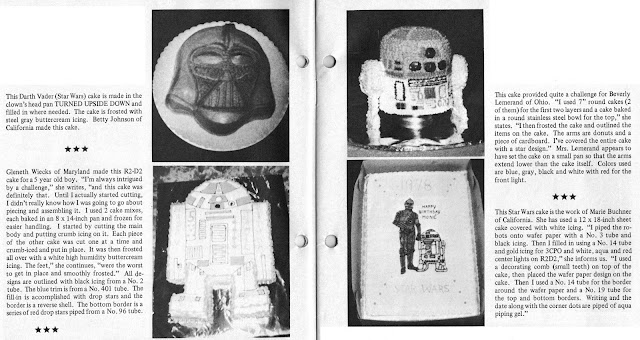 This pair of cakes was featured in the March 1978 issue. The character collage includes a gorilla-esque Chewbacca: 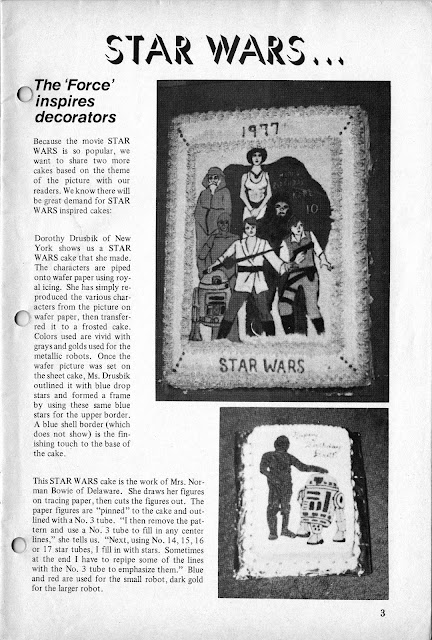 This Vader cake featured in the August 1978 issue proclaims that “Darth Vadar Lives”:

This cake, from February 1981, features a Darth Vader based on artwork from the Drawing Board wrapping paper: 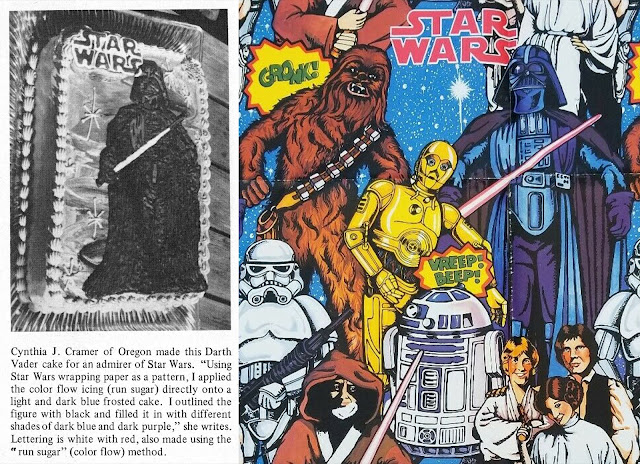 A wide-eyed Chewbacca is featured on this cake from July 1979:

This Chewbacca cake from July 1980 appears to have been inspired by its predecessor from a year prior. 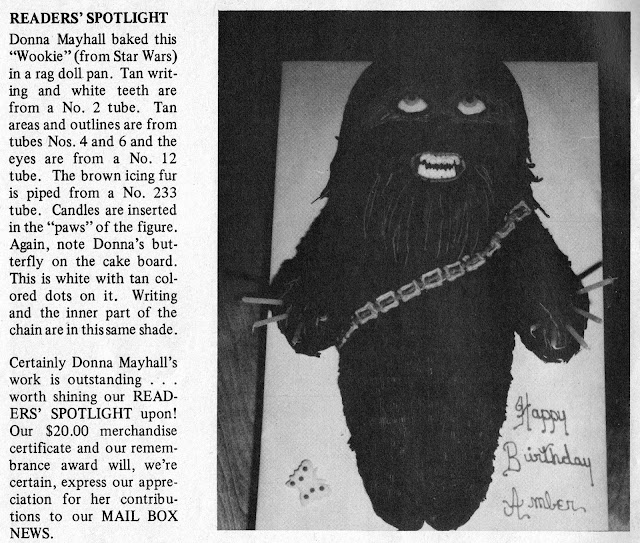 I really like this award-winning cake from April 1978, which featured a 3-dimensional Death Star (actually a frosted ball of styrofoam) along with an X-Wing and TIE Fighter: 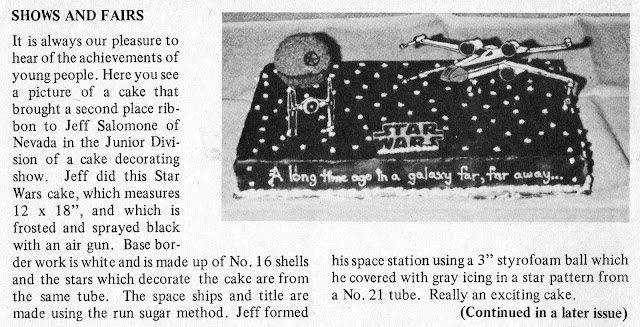 Last, but certainly not least, this one from July 1981 is described as an “airplane cake.” However, we all know that this cake is really based on the Kenner X-Wing toy, right down to reproducing (in icing form) the sound button on the rear end of the fuselage. The cake also uses the plastic canopy and a pair of guns from the Kenner toy: 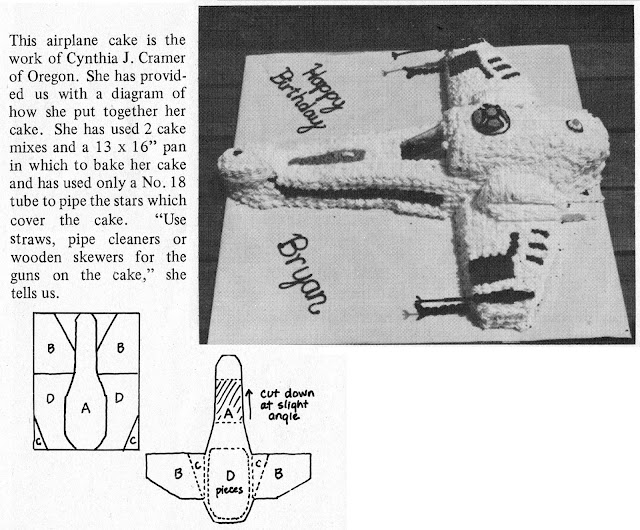 Hopefully you’ve enjoyed this nostalgic look back at some of the fun Star Wars-themed cakes from Mail Box News.
Posted by Ron at 11:41 AM