This Time Kenner is Ready: Tracking Empire's Release Through Advertising 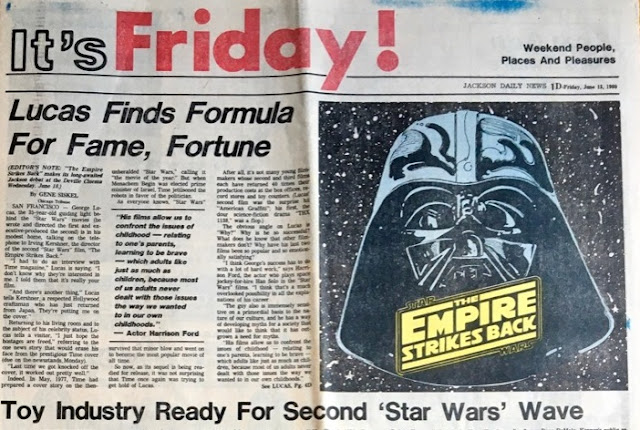 Below you see an advertisement, dated May 4, 1978, that announces the debut in stores of Kenner's Star Wars action figures and related toys. On that date, if you were a kid in the St. Louis area (the ad is from the St. Louis Post-Dispatch), you could run to Target and buy one of the first nine action figures -- if, that is, any remained in stock. 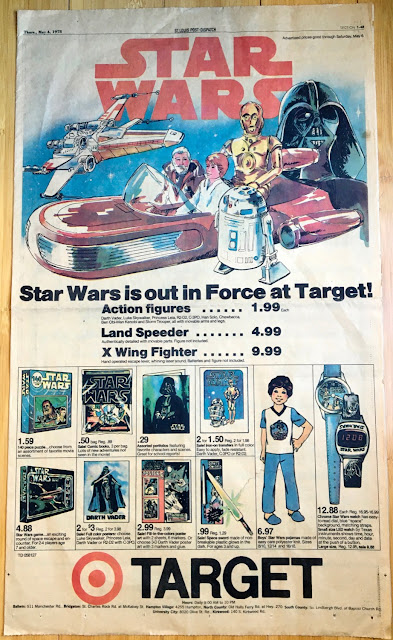 Well, as most nerdlingers know, fans of the first entry in the Star Wars franchise were forced to wait nearly a year, reckoned from the premiere of the film, to buy action figures toys based on the movie. It's not that Kenner was unprepared. The mid-sized Cincinnati company had only signed on as a licensee in spring of 1977, just prior to the film's release. Once Star Wars proved a massive hit, Kenner's nose was forced to the grindstone. The mission: get product onto store shelves as quickly as possible. Generally, it takes a year for a toy company to bring action figures to market. Kenner managed to shave more than a month off that schedule.

The big question: Would Empire deliver?


According to this article, written by Clarence Petersen for the Chicago Tribune of May 4, 1980, retailers remained skeptical. So skeptical that an anonymous local toy buyer, surely a congenital grouch, is quoted as saying "We're not planning for a major push. Everyone is leery of space toys this year. Sales fell off in 1979, but no one knows what the new movie will do. The whole thing is up for grabs."

Sue Sandler, an editor at Toys, Hobbies, and Crafts, agreed, saying "There will be a lot of caution, at least until the movie comes out and they see how much money it's making in the first couple of weeks."

Kenner PR guy Dave DeMala was slightly more optimistic. "We've had a couple of people here see the movie," he said, "and they say it's absolutely spectacular."

Hey, Dave's a PR guy; he's paid to be optimistic.

But in the final words of his quote, I detect a hint of trepidation. "Goodness," he told Petersen, "I hope they're right."

Well, we should probably forgive Dave his doubts. At the time, no company had ever based a toy line on a film trilogy. Remember, prior to the Star Wars Trilogy, sequential storytelling in movies was just about unheard of. Would audiences follow a story across three films and six years? And would they continue to want licensed trinkets tied to those films?

But while we can forgive DeMala, others we cannot forgive. Among these is the unnamed Kenner spokesperson who referred to the upcoming Tauntaun toy as a kangaroo.

Kenner's biggest product roll-out of all time is at stake. There's a huge advertising budget. The whole company is striving to present the product in the best possible light. And this guy pitches the Tauntaun as "not a vehicle but, like, well, like a kangaroo." Nice. 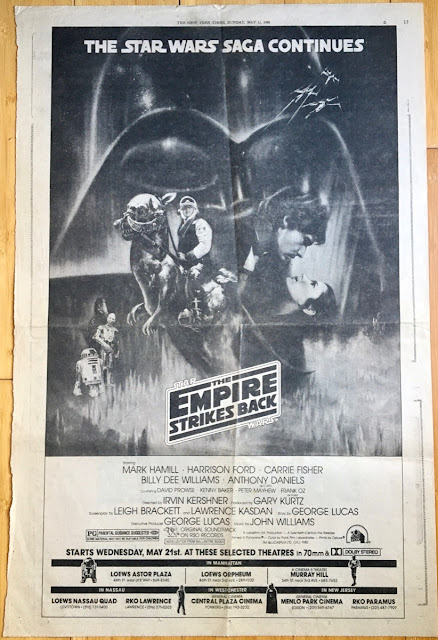 As we all know, Dave's coworkers were right: Empire was spectacular. And when the movie finally hit theaters, accompanied in major markets by full-page newspaper ads like the one seen above (complete with space kangaroo), its box-office performance put the turbulent minds of toy buyers at ease. It was a hit rivaled in recent memory only by its predecessor. 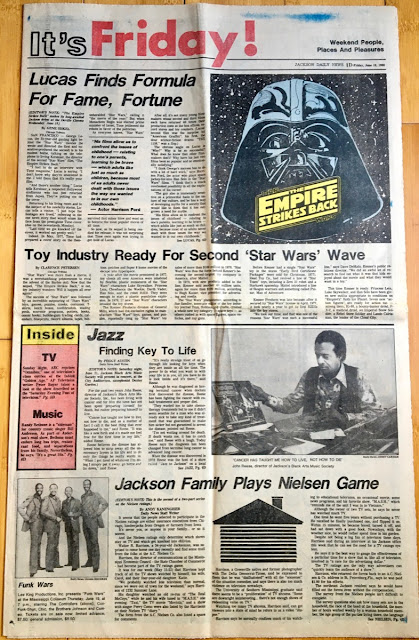 Empire did so well in its early bookings that, by June 13, when Petersen's article was reprinted in Mississippi's Jackson Daily News, the skeptical comments had been edited out of it. So, for that matter, had the kangaroo.

The emphasis this time around was less on speculation regarding the movie's performance than on Kenner's ability to meet demand.

The gist of the piece can be boiled down to one line: "This time Kenner is ready."

Why, you ask, was Petersen's article re-run in Jackson, Mississippi, over a month after its debut in Chicago?

Well, the release of Empire was staggered. Although 70mm prints were released in key markets on May 21, 1980, many areas didn't get the movie until June 18. According to this helpful site, Empire didn't screen anywhere in Mississippi during the month of May. So the Jackson Daily News ran the story on June 13 in anticipation of the movie's local opening later that week. 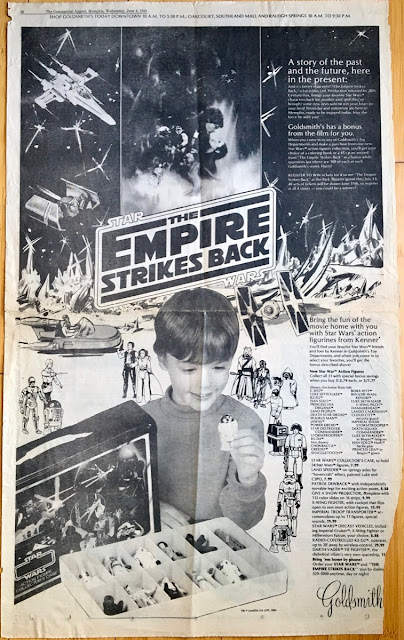 Audiences in Memphis, Tennessee were luckier than those in Jackson, Mississippi: they got to see Empire right off the bat, and in nothing less than 70mm. This ad ran in the local Commercial Appeal on June 4, 1980, nearly two weeks after the movie opened at the Park Theater.

The ad combines a photographic image from Kenner's 1980 Toy Fair catalog with Kenner-supplied line art, a reproduction of Roger Kastel's art for the theatrical one-sheet poster, and some wonky hand-drawn imagery. It makes for a gloriously full-page impression.

In support of the movie (and in support of sales), the retailer responsible for the ad, Goldsmith's, offered a free record or coloring book to the first 100 shoppers who purchased an action figure. Not a bad deal! What's more, the department store ran a contest whose winners received four tickets to see Empire at the Park.

Chances are the folks who won those tickets had already seen the movie. But who's going to complain about seeing The Empire Strikes Back twice? 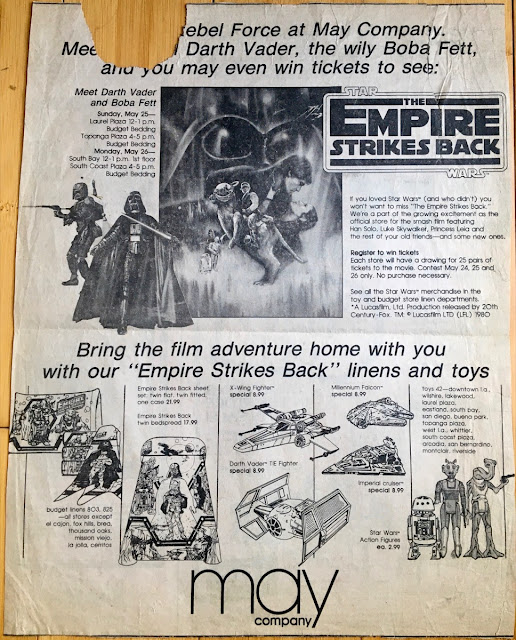 Audiences in the Los Angeles area had ample opportunity to see the movie on multiple occasions: Several theaters in Orange County had the movie as soon as it was available. The above ad, from the May Company, spotlights Kenner's toys and the bedding products produced by the Bibb company.

The sharp observer will noticed that May used a representation of MPC's model kit version of Darth Vader's TIE Fighter rather than Kenner's larger action figure toy. Oops.

Like Goldsmith's in Memphis, May offered free movie tickets to winners of a store-sponsored contest. They also offered something more special: personal appearances by Darth Vader and Boba Fett.

The latter is described as "wily," leading me to believe that more than a few kids walked into a May location demanding to be introduced to that fearsome intergalactic bounty hunter, Willy Boba Fett.

Hey, as names go, it's no stupider than Salacious B. Crumb. 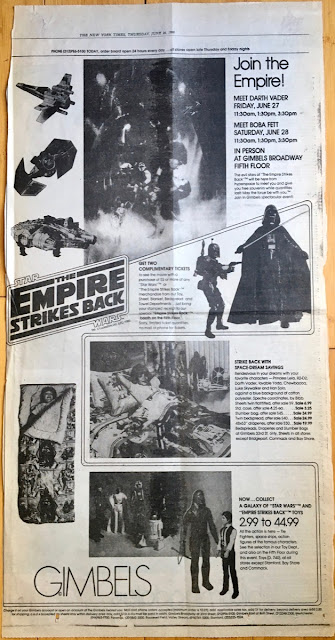 Not to be outdone, the proprietors of Manhattan's Gimbels commanded their customers to "strike back with space-dream savings." Whatever those are. 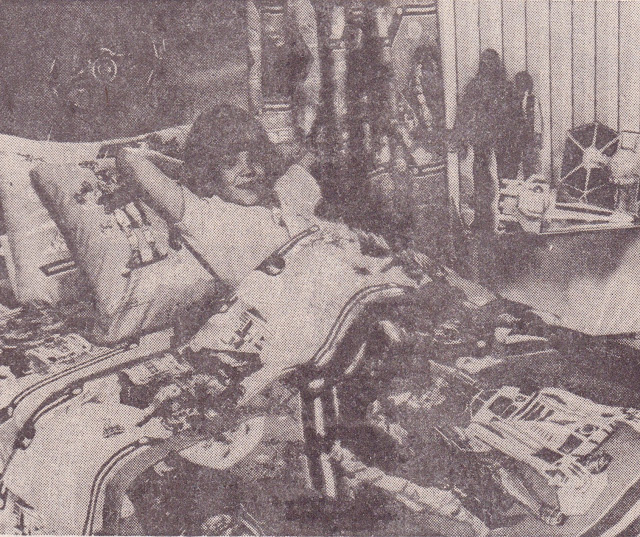 Interestingly, the ad, from the New York Times, dates from late June, when Empire had been in local theaters for about a month. Maybe special guests Darth Vader and Willy Boba Fett were delayed by their duties on the West Coast? The ad does say that they planned to travel to Gimbels through hyperspace...

Not to be outdone by their competitors in other parts of the country, Gimbels offered movie tickets to select customers. In this case, anyone who bought more than $5 worth of licensed merchandise received two passes for Empire. 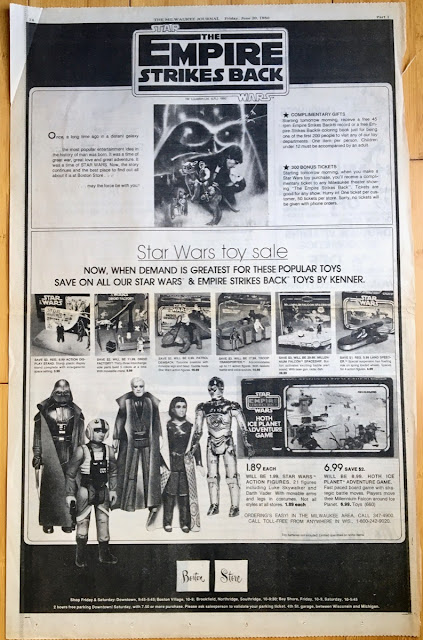 In Milwaukee, the Boston Store followed Gimbels' lead by running its big Empire promotion about a month after the movie debuted locally at the Southtown Cinema (but just in time for the wider 35mm release).

Alas, Darth Vader and Willy Boba Fett didn't make it out to Wisconsin. I mean, would you?

This ad is similar to the others featured in this post in that it utilizes a reproduction of the Kastel one-sheet art and offers free movie tickets as a promotional tie-in. Also, it repeats the Goldsmith's offer of a free coloring book or record with the purchase of a toy.

It's cool to see the scarce retail version of the Action Display Stand featured so prominently.

But even cooler is the introductory text, which reads:

Well, here we are nearly 40 years later and it's still a time of Star Wars.

When The Rise of Skywalker hits theaters next month, you probably won't be able to meet Darth Vader at your local department store, and you won't be able to see it in 70mm. Most of the old department stores have closed, and movies today are typically measured in pixels rather than millimeters. Shoot, you probably won't even be able to admire a full-page newspaper ad related to the movie, because who reads newspapers these days?

Happily, for those who are sentimental about such things, there are still toys -- for now, anyway.
Posted by Ron at 8:27 AM