As August comes to a close, we'll spend a bit of time looking into the Summer market -- the typical season of vintage where prices soar through the roof and people clean out the closets, driving up the availability of key items on eBay.

This month, however, we'll diverge from the traditional eBay review and cover an interesting live auction with a focus on a growing area of the hobby: catalog multi-figure mailers (for more information on these, check out this SWCA Special Feature). The segment has always been a niche, and there are several reasons why. First, there aren’t a lot of these left, especially in comparison to MOC figures. For example, for roughly every 1,000 MOC figures that sell on eBay, 1 catalog mailer is sold. That’s a pretty staggering ratio when you think about it. Thus, it makes it hard to focus on the segment as they’re truly scarce, and with limited availability comes a more limited collector base. One thing that comes with rarity combined with growth in the marketplace is price inflation. Over the years these items have kept pace with the overall staggering rate of price appreciation. As you’ll see in our auction results, less desirable items will sell in the $400-$600 range with more expensive and desirable sets going for several thousand dollars.

The second reason this segment is a niche is pretty obvious: they’re not the most aesthetically attractive items on the market. I’m not saying they’re ugly, but they usually don’t have the detailed artwork or eye appeal that a lot of other items in the hobby have. Now there are exceptions to this, as the ESB line art boxes could be considered some of the best two-color artwork in the vintage line. They’re also some of the most desirable as well, you may remember a MarketWatch a few years ago where an empty line art box went for over $1,500 on eBay. Needless to say, there’s truly some strong demand for some of these key pieces and people willing to pay top dollar.

The third challenging thing about catalog mailers is one that’s truly a matter of opinion and personal style.  That challenge is how do you effectively display these items? You can’t stand the figures up like loose figures, you have to lean or lay them down. The other option isn’t exactly cheap -- that being getting custom cases built for them or sending them to AFA to be cased. This is one area where I feel that it’s undeniable that AFA does the best job of making an item more visually appealing. Don’t get me wrong, I think that having a case built is great, but side by side I don’t think there’s any denying that AFA adds a special touch to the quality and consistency of laying these out for display.

The segment is growing due in part to focus collectors and what I would call a maturing collector base looking for new areas to collect. Ultimately the segment is fairly diverse. Among the three movie lines there are over 80 variations of these to be released into the market. There’s also an interesting level of nostalgia attached to them, given they all came through catalogs or in some rare cases through specific retail stores or other promotions. Personally I feel part of this nostalgia comes from the fact that kids like me that grew up in a rural community and couldn’t ride their bikes to a store that sold figures probably saw the toys more through these catalogs then through retail stores.

Due to a major auction in June we have the opportunity to look at more of these in one month then we typically see in the market in a year. This auction was held through an auction house in Pennsylvania which also sold several modern era items from the DeMartino collection. The auction featured not only Star Wars mailers, but other toys from the vintage line, comics, and several other popular toy lines for the 1980s.

Rather than covering these items in our usual detail I’ll be listing out each of the mailers that sold and speaking only to each movie release, as covering all of these individually would be a daunting task.

The first series of catalog mailers followed suit amongst other popular toy lines which wouldn’t sell the retail packaged items via the catalog channel and instead focused on diversifying their mix with multi packs and other ways to add value and increase the ticket price of each item. Think about it in scale -- it really wouldn’t make sense for retailers to try and ship single items to end users who could easily buy the same products at their local retailer outlets. However, you couldn’t ignore the channel either as it was a huge part of the industry during the time. Thus manufacturers found unique ways to add value to offerings by creating the value packs and exclusive offers for the catalog retailers.

The Star Wars line is arguably the most unique of the releases in diversity of sets, but it could also be the dullest in terms of packaging. With almost every set coming in a plain brown box, there was little visual appeal to the packaging itself. Regardless, these have become very sought after in the hobby and the sets fetch a large price tag for even the most mundane group of characters.

In our auctions at hand we had a nice selection of different sets from the first film's release. However, none really stood out from the crowd in terms of price or rarity, thus we’ll save some of our dialogue for this month for the ESB and ROTJ releases which were a bit more diverse and well represented. 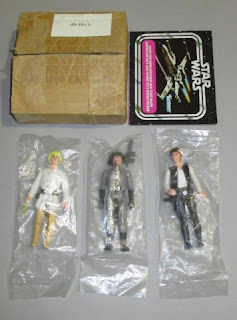 3-Pack – Chewbacca, C-3PO, R2-D2 – AFA 75 = $...
We don't have record of what this set went for. However, a similar set was sold not too long after on eBay. This auction was for an AFA85 example: Chewy-C-3PO-R2D2 AFA 85 Mailer. Although this didn't have the Kenner catalog included it's a good reference point. 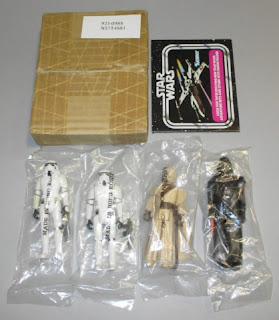 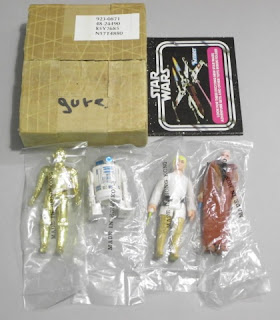 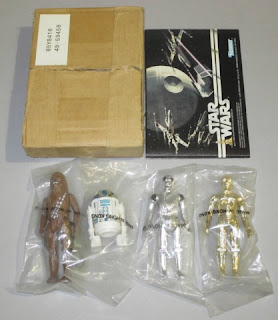 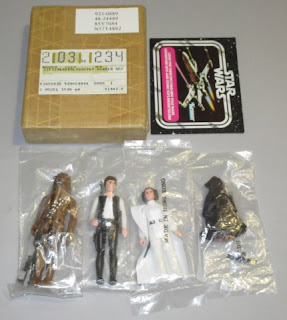 In the 2nd wave of catalog mailers, we find that the packaging becomes more diverse. Plain white boxes, line art, and coded boxes were all featured in the release supporting the Empire era in the vintage line. Not only did the appearance change, but so did the material of the boxes themselves. Here we saw a mix of a similar thick cardboard stock that was used in the Star Wars release and the thinner cardboard that would ultimately be used in the entire Return of the Jedi release.

The vintage ESB mailer line also saw the most diversity in figure combination quantities, spanning from 3 to 15 figures in a set. With multi-figure mailers, the number of figures included drives a significant portion of the value and can be seen in the auctions we have listed this month. Think how crazy it would have been to get a 15-pack as a gift growing up -- BOOM -- instant collection with one tiny white box.

In this grouping of auctions there are a few very noteworthy sets. One of the smaller quantity but higher dollar pieces we saw sell was a 4-pack including Vader, Bossk, IG-88 and Boba Fett -- quite the motley crew indeed. The box in this set did have some pen marks which probably brought the overall price down, however this piece still commanded a price of $750, which is fairly remarkable.

Not surprisingly, the large quantity sets saw the biggest price tags attached to them, with each of the 15-packs reaching over $4K a piece. These were a few of the last auctions of the night and were the longest in terms of time with nearly 40 bids on each item in the live auction and a lot of bids in the pre-show bidding. 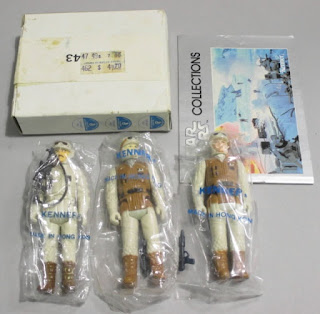 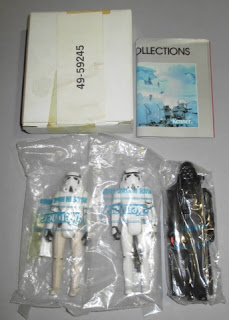 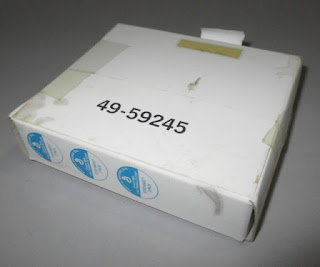 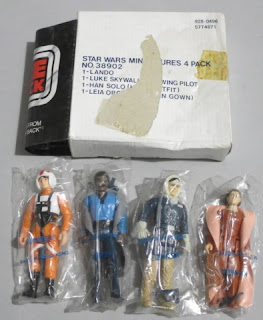 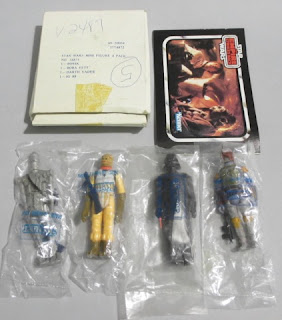 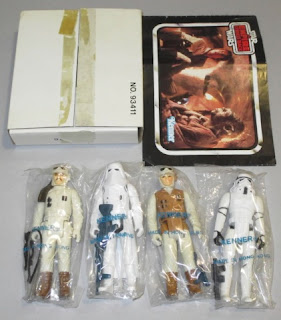 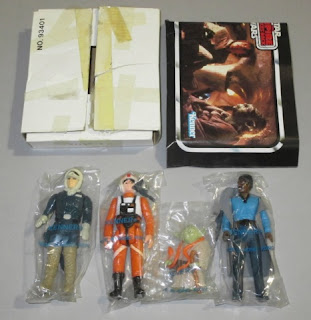 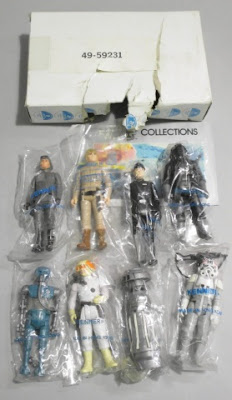 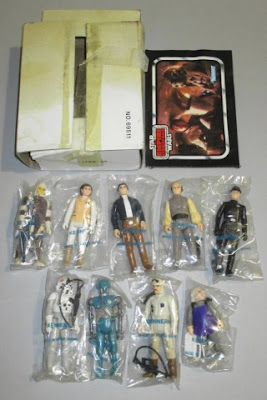 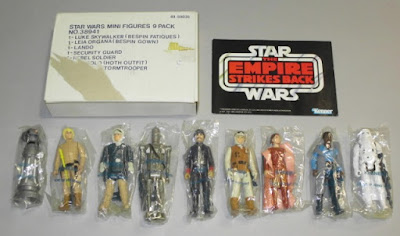 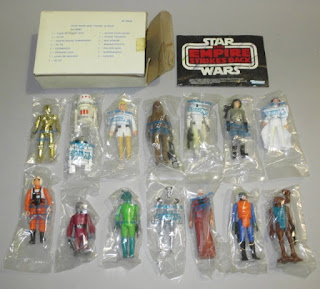 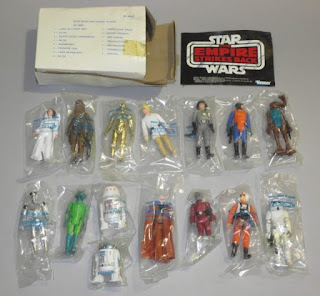 RETURN OF THE JEDI:

The Jedi release continued to build on the line, however it cut back in some key aspects. For one, diversity of packaging was limited. The line built a consistent type of packaging with all but three variants featuring the same large round sticker on the box. In addition, it limited the number of figures to 3,4,7 and 8, thus removing the 9 and 15 packs from the mix. This line also relied less on characters from the previous two movies and spent the majority of the time promoting new characters. Another new move with this series was the more consistent and prominent listing of each of the figures on the box. We also see the naming of certain sets such as the Robots set, Villains set, Heroes set, and so on. Both of these changes made the boxes more retail-friendly and also aligned with the move towards a standardized type of packaging across the line.

This group of listings had an interesting mix of sealed and opened items, along with completely accurate sets with sealed baggies, others with open baggies, and some that just had the wrong baggies included with the sets. One of the most notable auctions was the Villains 8 Pack that features several popular Imperial figures along with Boba Fett, open and from what it appeared with at least two incorrect baggies for the set, selling for a price of $1,700 ,which is the most expensive open ROTJ set I believe I’ve seen to date.

In addition there were two 4 packs that I had never personally seen, even in pictures let alone in an auction: the Robots set which included IG-88, R2-D2, C-3PO and for some reason Chewy (which is very reminiscent of his inclusion in the "Androids" 3 Pack from the first release of 3 packs in the Star Wars line). There was a sealed and open version of this one and both went for pretty impressive prices. The second item that I had personally never seen before was another 4 pack very similar to the aforementioned in that three of the figures were the same, but IG-88 was replaced with Ben Kenobi. Going for an equally impressive price, this was the 2nd most expensive open item of the ROTJ release in this auction. The most expensive for some reason was a 4 pack including Vader, Leia, Han and Luke selling for $2,000 in a sealed package. The thing to note here is that this is actually one of the more common sets in the ROTJ release but demanded the highest price of any. I can’t really connect the dots on this but oh well, someone obviously really wanted this one and a sealed version isn’t nearly as common as an open version of the set. 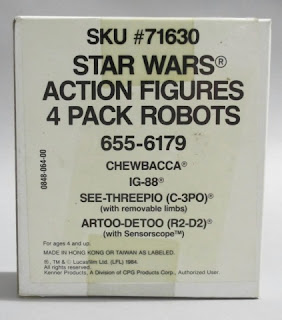 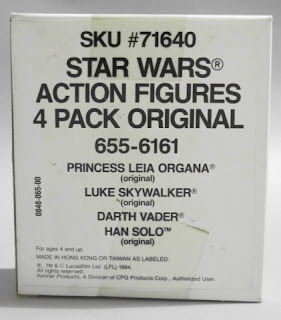 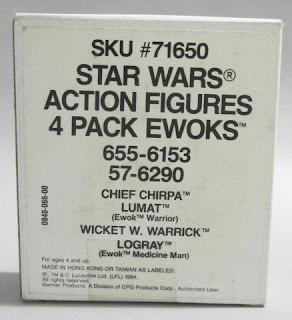 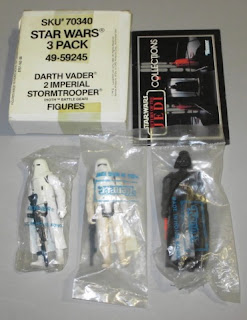 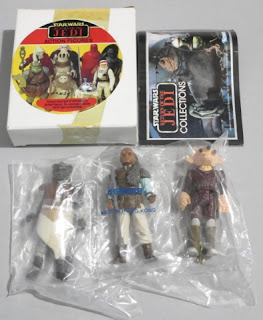 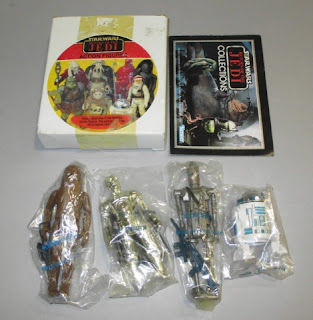 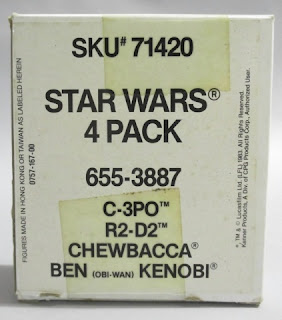 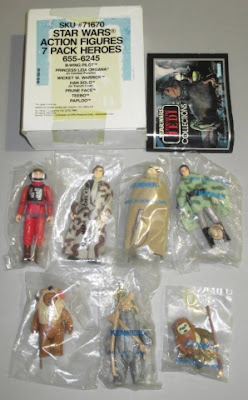 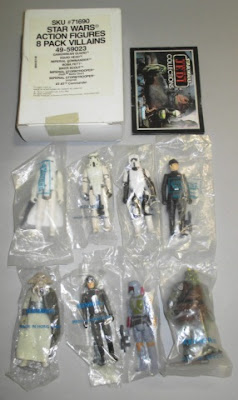 That wraps up the general market coverage for the Summer. We’ll be coming back to you in September with our next update.