As always, the Star Wars Community Digest is your place to get summaries about what's going on in the Star Wars collecting community across all of the Facebook groups and forums (well... those which want to be a part of this series of articles, anyway). Please be aware that many of these are closed Facebook groups, which means you will need to join them in order to read the conversations.


Luke Jedi focus collector and friend of the Star Wars Collectors Archive, Bob Martinazzi, passed away early last week. As such, a lot of threads and conversation were dedicated to memories of Bob and the impact he had on the hobby.

His friends and family have the deepest condolences of the entire Star Wars Collectors Archive editorial staff. This hobby and this world are a darker place without him. He will be missed.

Bob was interviewed in Episode 76 of the SWCA's Podcast, The Chive Cast Vintage Pod.

The Display Group Gives Away a Bunch of Awesome Store Displays


It's not every day that a group gives away a couple thousand dollars worth of collectibles, but that's just what the Star Wars Displays and Advertising Group did last week. The rules of the contest were simple: reply to the thread with a picture of a display or advertising item in your collection and you'd be entered. Then 7 random winners were chosen, and they won some surprisingly awesome stuff! Will Grief did not skimp on the prizes, that's for sure.

If you are unfamiliar with the prizes, further reading on some of them can be found here on the Star Wars Collectors Archive:
12 Action Figure Display Bin Header
ESB Shelftalkers

A Set of 3-Packs is Showcased in the IC


David DeMarchis casually posted this image to The Imperial Commissary Group last week, showcasing his complete collection of 3-packs, as well as a variety of other vintage multi-pack rarities. There's really not much else I can say about this image, so I'll let it speak for itself.

The full thread can be found here: Beautiful Toys

Buried Treasure from the Palitoy Factory in Leicestershire

Companies are often left with an odd dilemma when they produce more product than the market demands. The company has to decide if it is more cost efficient to liquidate the remaining merchandise or to toss it.

Toy companies have often sent their unwanted overstock to landfills for dumping. This has caused the occasional fearless collector to embark on a stomach turning archeological dig.

It may seem to be an impossible task to dig up any vintage toys from a landfill and have them be recognizable and in condition to be collectible.

But it has happened before. In April of 2014, video game collectors went on a pilgrimage in New Mexico to a landfill. It had long been rumored that the Atari company dumped nearly one million copies of a rare video game cartridge featuring E.T.

The collectors were able to locate and unearth collectible quality examples with a unique allure (and smell). A recent thread in the Jabba's Court Vintage Star Wars Collectors Group discusses the issue. It has been reported from multiple sources that the Palitoy company, who was the manufacturer of the vintage Star Wars action figures in the United Kingdom, dumped their overstock regularly in a landfill in Leicestershire.

Anyone want to grab a shovel?

The full thread can be found here: Palitoy Buried Treasure

A previously undescribed and unlicensed counter top store display was recently discovered in a find highlighted in the Star Wars Displays and Advertising and Star Wars Bootlegs and Knockoff Collectors groups. The display features puffy vinyl Star Wars themed magnets with groovy stylings. The set includes multicolored versions of the X-Wing Fighter, R2-D2 and in the bootleg tradition, unrelated characters including Ming the Merciless.

Additional reading on the Archive:
Star Wars magnets on the SWCA


As you might recall from our last issue, there was a find of Power of the Force coins, among which were a lot of rarities. The coins weren't in the best condition though, showing a variety of damage and some were even spray-painted silver. The thinking the week before last was that the find was good and the coins were legitimate. Last week, however, there were growing concerns about the find and whether or not the coins are all authentic. The Star Wars: POTF (Last 17) Vintage Collecting Group discussed a recent auction for a Darth Vader coin from the find, which was won by a member there and then closely examined. He shares his findings with the group, which seem to call the entire find into question.

The full thread can be found here: The Bucket Find Part 2


Additional reading on the Archive:
The Comprehensive Guide to POTF, Droids, and Ewoks Coins
Special Feature: Power of the Coins
SWCA Coin Gallery


Collector Christopher Caswell posted pictures in the La Guerre des Etoiles Group of an amazing item in his collection: an engineering pilot of the ESB Rebel Set 3-pack. Owning a 3-pack is a tough enough task and they're grails for most collectors, but to own a pre-production sample of one? That's even more impressive!

The full thread can be found here:
3-Pack EP

Additional reading on the Archive:
A nice description of what an engineering pilot is and what it was used for.

A Collector Rediscovers the Diverse Vintage Keshigomu Figures from Japan 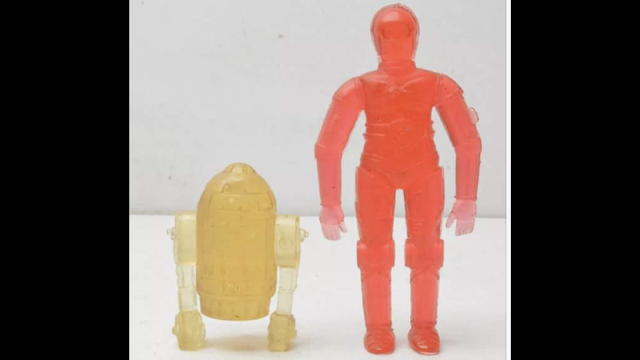 As the Star Wars mythology permeated the international social fabric in the late 1970s, the characters from the film were rapidly turned into collectibles by many toy manufacturers. Japan, which is known for its unique and imaginative toy lines, had just been introduced to a very successful new type of toy collectible.

Keshi (or Keshigomu) translates to rubber or eraser. They are small unarticulated rubber figures depicting characters from popular themes.

Hundreds of different Star Wars-themed Keshis exist in multiple colors and several scales. Two of the largest Keshigomu manufacturers in Japan were Takara and Maruka (many American children of the 1980s may remember the M.U.S.C.L.E. type of Keshi figures released by Bandai).

Recently, a collector took a chance on a couple of Keshis and a nice discussion ensued in the Star Wars 12 Backs and Early Vintage Collectors Group.

The full thread can be found here:
Keshigomu Figures

Further reading on the figures can be found in this old thread from the Rebelscum forums:
Japanese eraser (keshi gomu) toys

The Diverse World of Star Wars Food Collectibles:
A Discussion of Some of the Coolest Food Premiums in the Galaxy 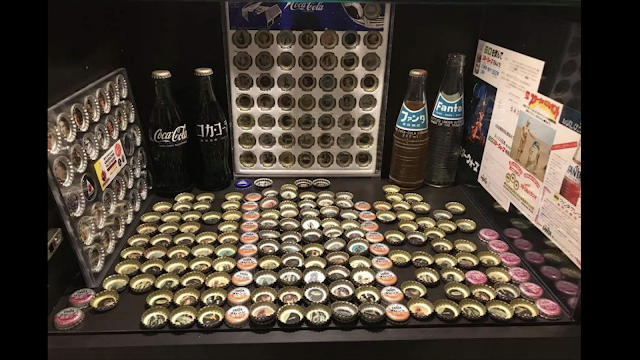 From Cereal Boxes to bottle caps, collectors in the Star Wars: The Empire Strikes Back Vintage Collecting Group discussed their favorite Star Wars Food related collectible and posted pictures from their collections!

The full thread can be found here:
Food Collectibles in the ESB Group 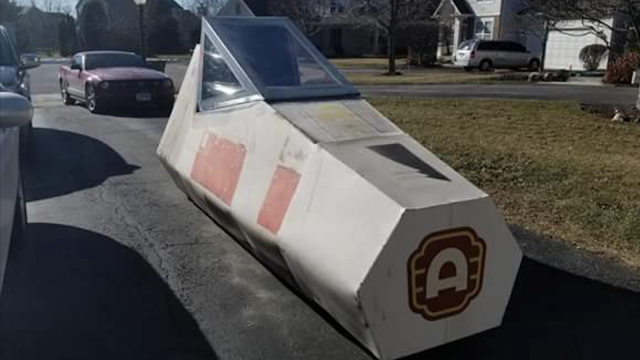 Alamo Drafthouse Cinema is a domestic chain of movie houses that provide food, unique giveaways, and fun experiences to moviegoers.

Four specially designed photo-op X-Wing cockpits were produced for the release of The Force Awakens, complete with helmets and a functioning hatch.

A lucky collector was able to bring one home at the end of the promotion and documented his fun journey in a thread in the Star Wars Displays and Advertising Group.

Further reading:
The Star Wars section of the Alamo Drafthouse's website, showcasing some of their special themed events.

Rebelscum Shares Its Most Emotional Moments


Sometimes as collectors we get so preoccupied with getting the next great piece or tracking down some lost grail, that we forget to cherish all of the cool moments we've had in this hobby. The vintage section of the Rebelscum Forum had a thread last week which invited collectors to share those "magical moments" which make collecting so much fun.

The full thread can be found here: What is the Most Magical/Emotional Moment You Have Had Collecting?


Our Star Wars Community Digest Time Capsule Thread for this Issue:
The list of proofs available for after-hours trading at C2...

There are a few seminal moments in the vintage collecting hobby: The Earth Toy Mall hardcopy find, the 1993 Las Vegas Store Display Auction, the Men Behind the Masks tour (one of the first times collectors from across the country met up in person), etc. Moments in time which are known and talked about by collectors who weren't even there to see them. The Celebration II Proof Sale was one of those occasions. 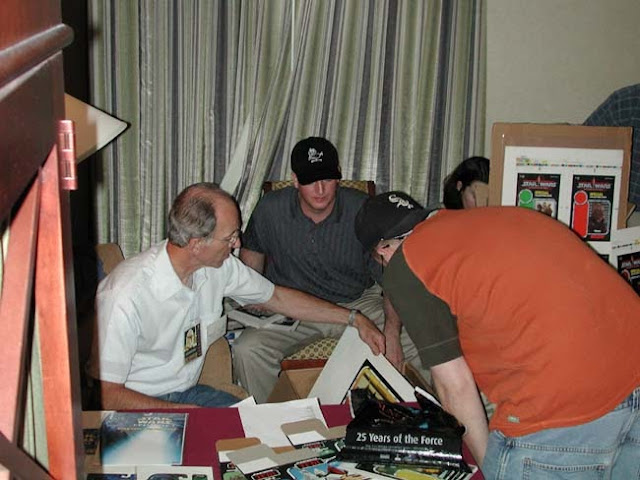 Basically, a collector decided to sell his proof cards at a room sale during Celebration II in 2002. While that might not seem especially memorable, the collector in question was Steve Denny and his collection of proofs was a significant percentage of the total number of vintage Star Wars proof cards in the world! 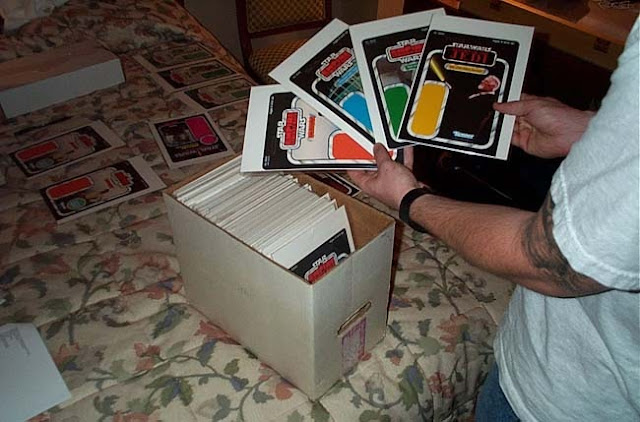 That sale is a sale which will be remembered as long as people are collecting Star Wars toys. And thankfully, all of the threads related to it still exist. Denny was also interviewed on our podcast in Episode 83: Thousands of Prototypes: Steve Denny Story Time.

Further reading:
The list of proofs available for after-hours trading at C2...
What kind of prices were the Denny/Flarida proofs fetching?
Pictures from the Denny / Flarida sale
wish i saw the C2 Denny/Flarida sale coming
Posted by Tommy Garvey at 7:00 AM