You're a kid in the fall of 1977. You've just seen Star Wars for the 11th time, and you're wandering through the toy aisle of a department store while your mother fends off the advances of the slightly louche gentleman who sells mops and vacuum cleaners.

What do your eyes fix upon?

Chances are they fix upon the first wave of Kenner's Star Wars jigsaw puzzles.

Remember, in the fall of '77 licensed Star Wars product was scarce. Kenner, the principal toy licensee, offered only a board game, two painting sets, and the Early Bird Certificate Package. Actual honest-to-goodness toys were still several months away.

So you're looking at puzzles. And perhaps you're thinking, "What have puzzles ever done for me?"

Sure, there was that time you and Timmy Perkins argued over who got to put the last piece into Farrah on that Charlie's Angels puzzle that his uncle gave him for Hanukkah. But that was different. You had a broken ankle. And it was Farrah.

Come to think of it, Timmy Perkins is Methodist. What is he doing getting presents for Hanukkah?

Regardless, you're not exactly convinced by Star Wars puzzles. But the pictures are cool; they really evoke the movie. And what are you going to do, buy a freakin' Micronaut? Micronauts just won't cut it. Not now that Star Wars exists.

So you look back over at your mom as you try to formulate a plan to ask her for $2.50. She's still talking to that guy. And now she's calling him by his first name. 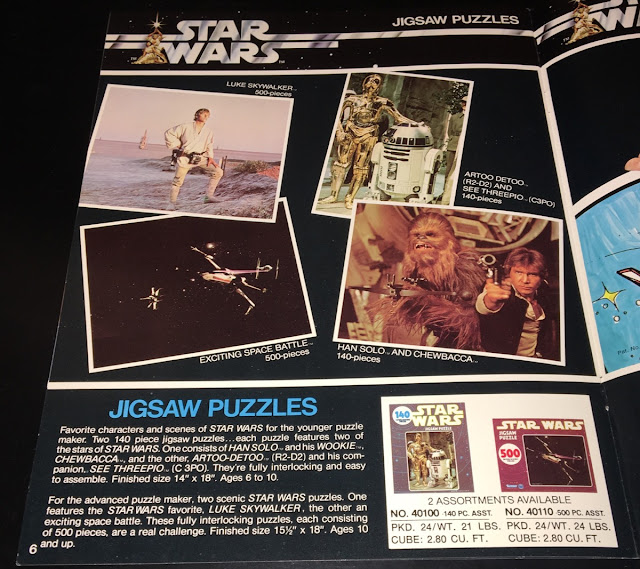 Kenner's puzzle line debuted with four products spread across two assortments. One assortment contained a pair of 140-piece puzzles, one depicting the droids, the other depicting Han Solo and Chewbacca. The other assortment boasted 500-piece puzzles depicting a space battle and Luke Skywalker on his home planet Tatooine. 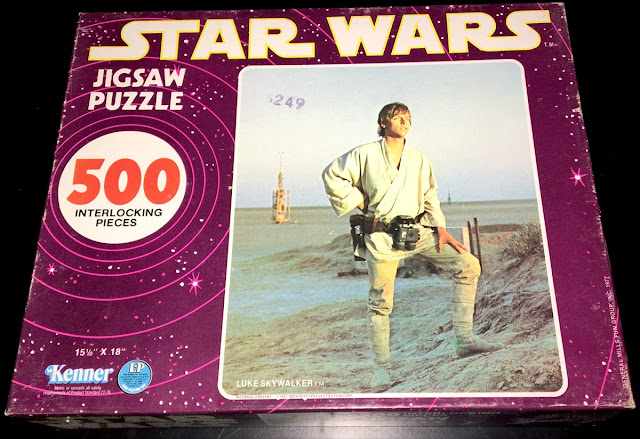 The earliness of these products is demonstrated by their aesthetics: They don't even look like Kenner Star Wars products.

Rather than the familiar black-and-silver color scheme that Kenner would eventually use on every Star Wars product that had no connection to Play-Doh, their boxes sported odd, almost fruity design schemes. While the 140-piece puzzles came in blue boxes, their 500-piece counterparts featured packaging of a color that can only be described as electric mauve. 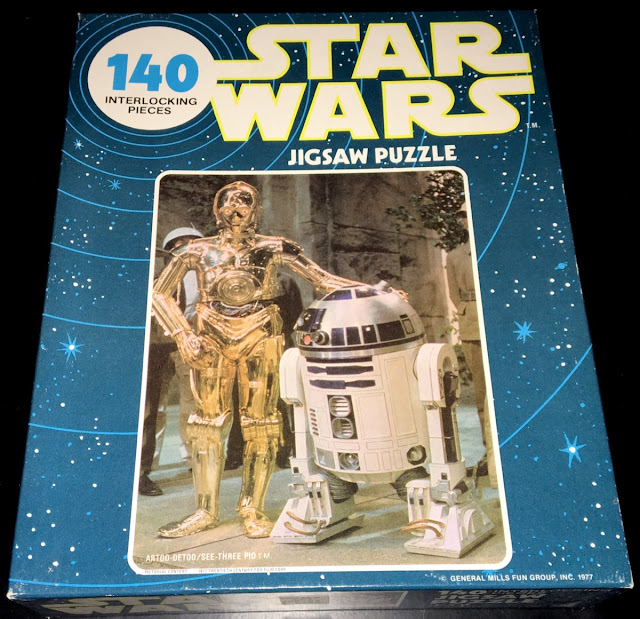 Coloration aside, the boxes featured primitive star-field graphics and a motif of concentric circles that may have been a reference to the illuminated charts seen in the Rebels' command room on Yavin. 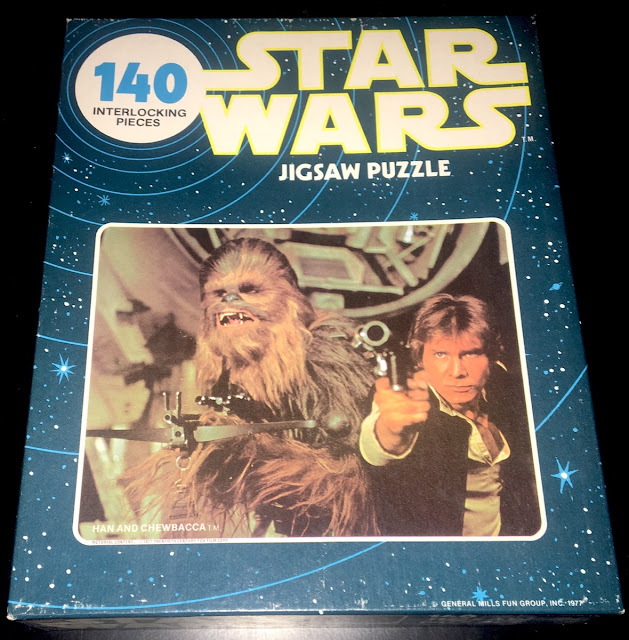 No doubt about it, with the possible exceptions of Blue Snaggletooth and the plush version of Chewbacca, these are the most '70s-looking things that Kenner released in association with Star Wars. 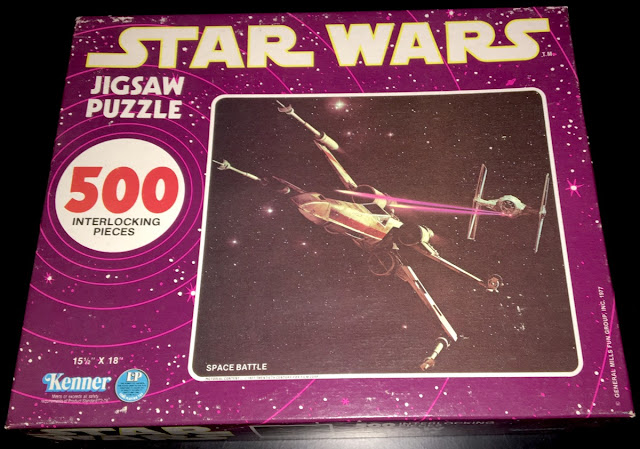 Perhaps the most amusing puzzle of the original four was the one titled "Space Battle," which featured an image of an X-Wing and TIE Fighter locked in battle.

This is undoubtedly the product to which Kenner representative Jim Black referred when he told Steve Sansweet that "One of the first things we shipped was a boxed puzzle that had so much black sky and so many small stars, that it was almost impossible to put together." 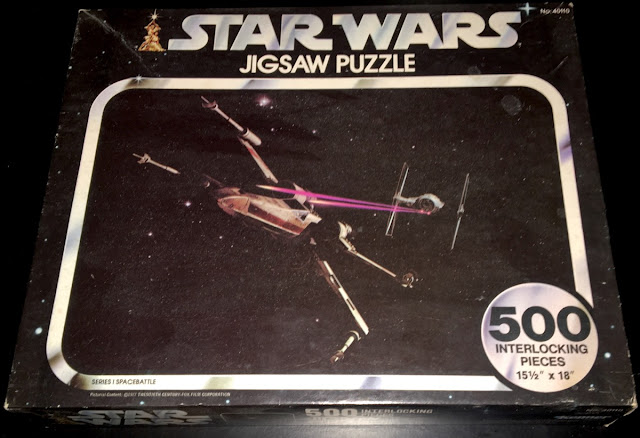 Impossible to put together or not, Kenner re-released the Space Battle puzzle as part of their 1978 line of products. And when they did, its box was sporting the familiar black-and-silver deco scheme. 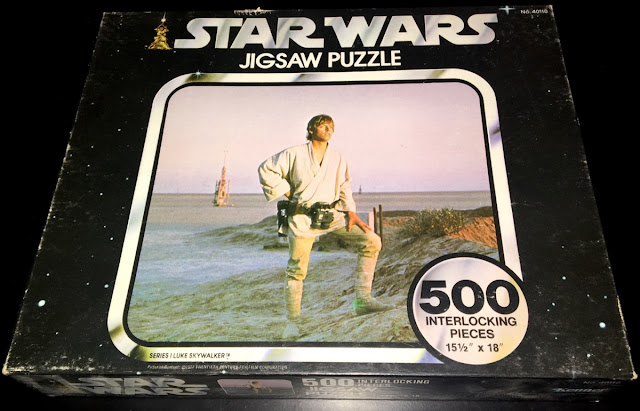 Not only were all four of the early puzzles reissued in the new packaging, text was added to their boxes to make it clear that they comprised the first series of Kenner Star Wars puzzles. Lest anyone doubt that additional series were imminent. 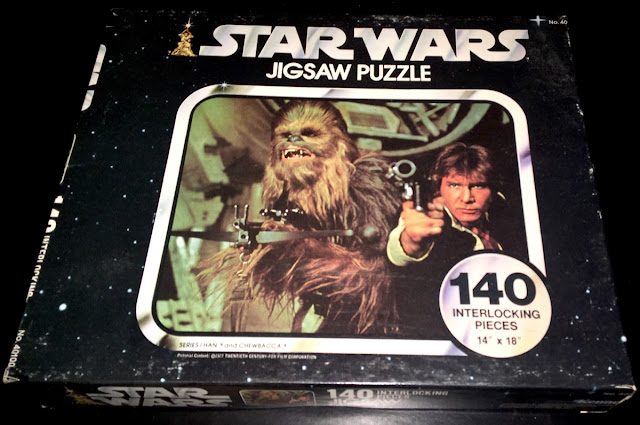 For some reason, upon its reissue, the puzzle depicting Han and Chewie was packaged in a horizontally oriented box. The original blue-box version featured a vertically oriented design. 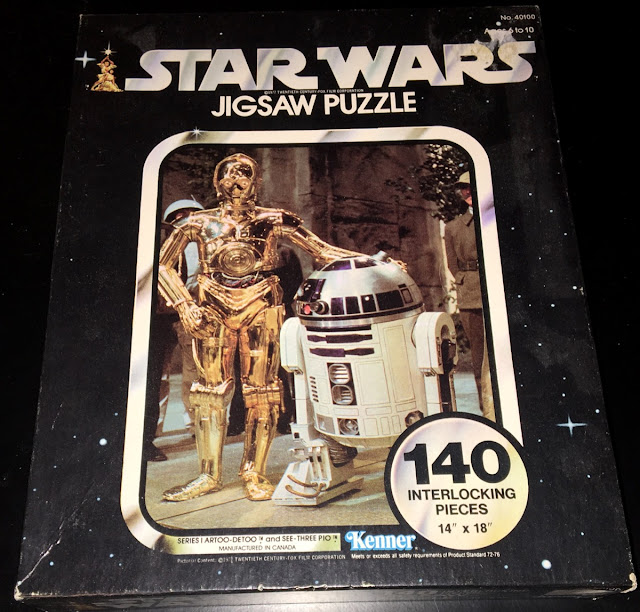 The photo I'm using to illustrate the puzzle featuring the droids provides a good opportunity to discuss a variation that affects the puzzles. If you look at the lower portion of the silver "racetrack" border, you'll see that the Kenner logo appears between the title and the circular element highlighting the number of pieces and size. This variation appears to affect all of the first- and second-series puzzles. In other words, all the puzzles from these series can be found in versions with and without the Kenner logo on the front of the box.

When the Kenner logo was added to the front of the box, age ranges were also added to the upper right corner.

You might also have noticed that, on the droids puzzle featured above, there is text below the title indicating that it was "manufactured in Canada." That's getting a little too esoteric for my tastes, but if you want to try to hunt down all the "manufactured in Canada" versions, be my guest. And then considering scheduling an appointment with your therapist. 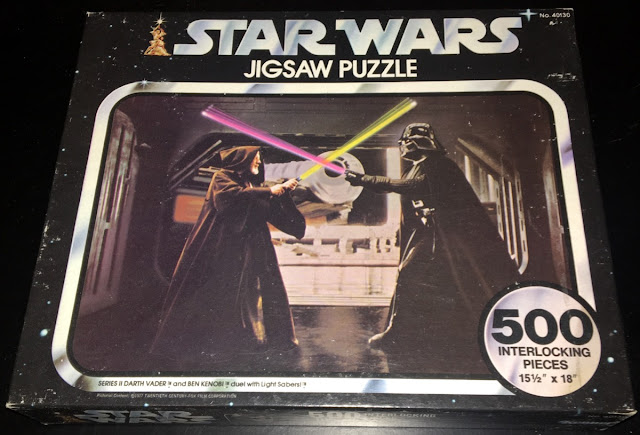 The series consisted of -- shockingly -- four new puzzles! As was the case with the earlier series, two consisted of 140 pieces, and two consisted of 500 pieces. My favorite is probably the one seen above, depicting the duel between Obi-Wan Kenobi and Darth Vader.

If you're looking at this item and muttering, "Gee, that looks a little odd," it's probably because the entire background, showing the Death Star hangar in which the Falcon is parked, is the creation of an airbrush artist. In the film, the orientation of the Falcon is flipped. I think it more than likely that the original background was too dark to serve as good puzzle material. So Kenner redid it. Also, the sabers have been recolored. Ben's yellow saber matches the accessory eventually packaged with the large-size action figure.

A variation of this image appeared on Kenner's packaging for their inflatable lightsaber toy. 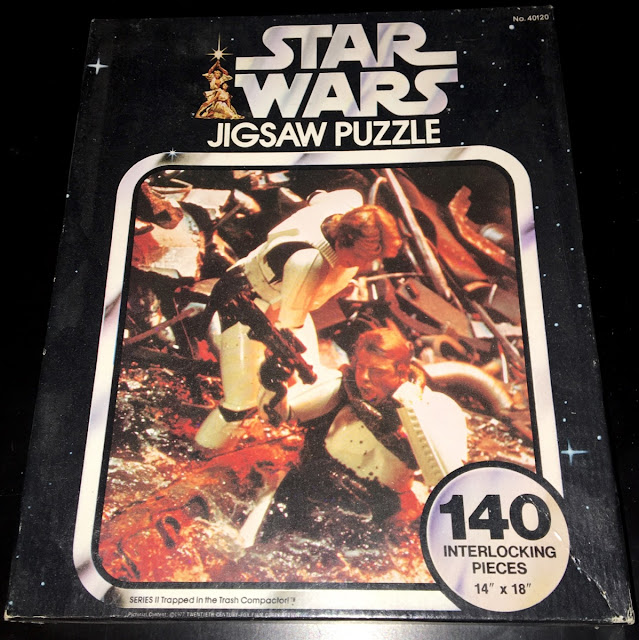 This puzzle is entitled, very appropriately, "Trapped in the Trash Compactor!"

Exclamation points were added to the titles of the puzzles released in Series II, presumably to make them sound more exciting. Possibly someone at Kenner was following the lead of Topps, whose trading cards often featured titles with exclamation points. 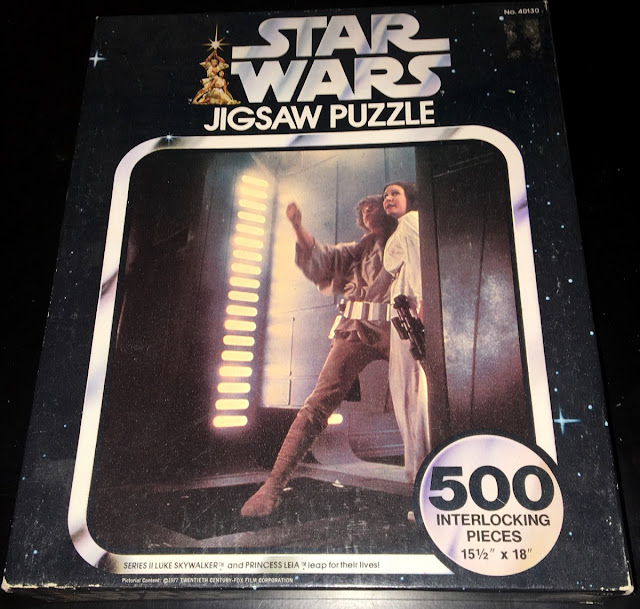 This 500-piece puzzle featured one of the film's most iconic moments. It's a good shot of that moment, too. Hamill really seems to be feeling it. 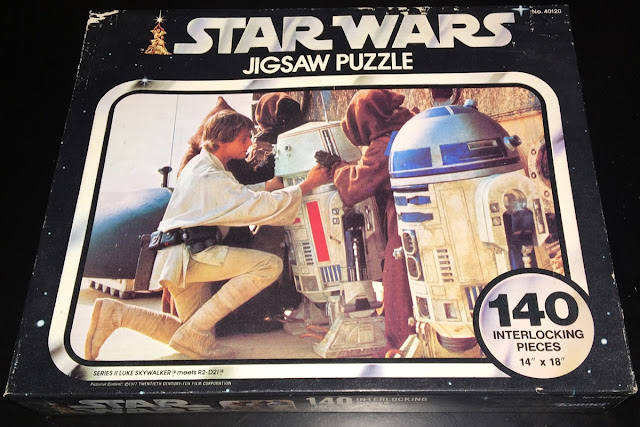 Rounding out Series II was this 140-piecer depicting Luke leaning in to make out with R5-D4.

Clearly, this momentous event necessitated the use of an exclamation point. 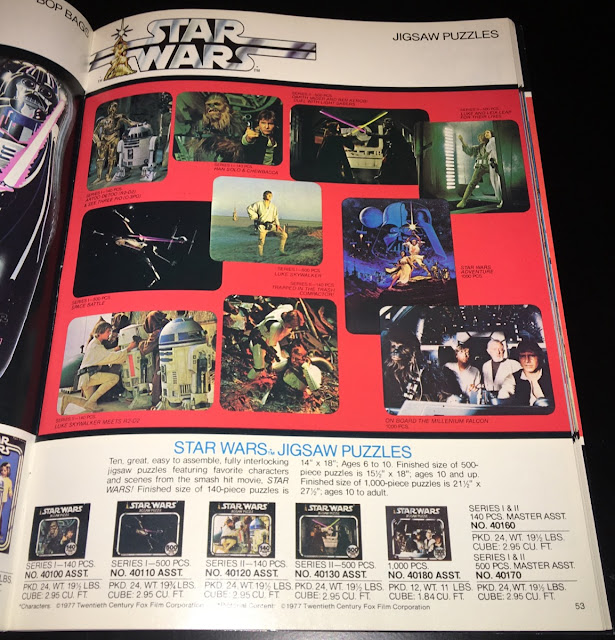 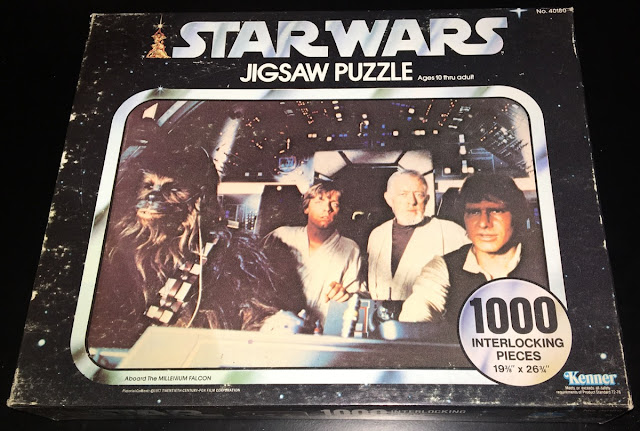 This example, entitled "Aboard the Millenium Falcon" (sic), shows the four male heroes contemplating the "small moon" that is in fact something far more sinister. 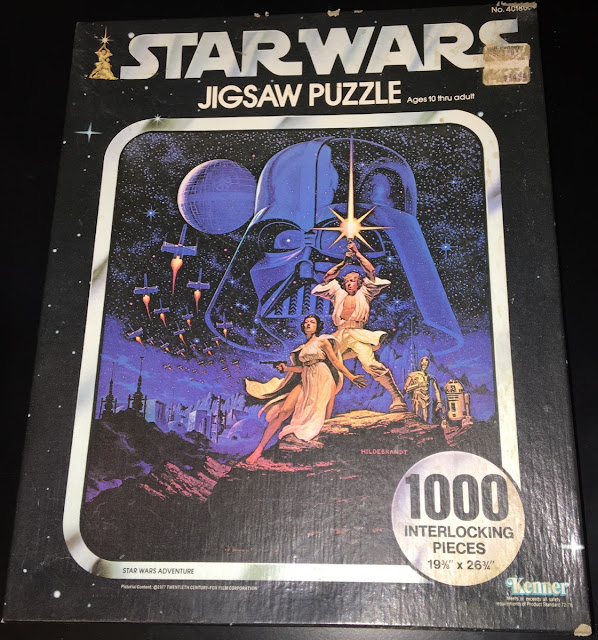 But the cooler of the duo, and perhaps the coolest item in the entire Kenner puzzle line, was this nifty number featuring the famous art developed for the movie by the Hildebrandt brothers. Factors sold tons of posters featuring this image; I'm sure Kenner had a similar idea in mind. Its title: "Star Wars Adventure." 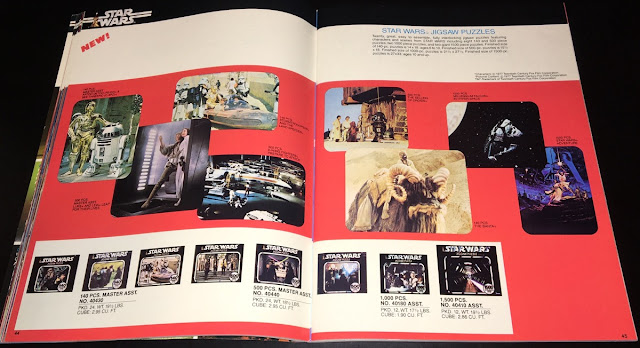 Kenner's puzzles were a success. In his book Star Wars: From Concept to Screen to Collectible, Steve Sansweet claims that Kenner sold nearly 2.5 million of them during 1978 alone. That being the case, it should come as no surprise that by 1979 the line had expanded to include 20 different products.

Is this most extensive line of puzzles ever developed in conjunction with a single movie? I would guess so... 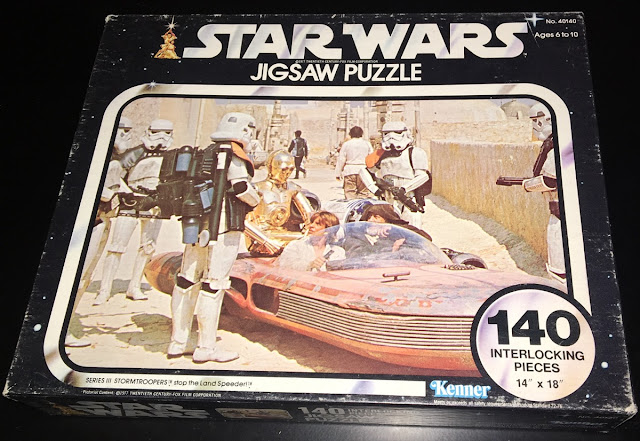 "Stormtroopers Stop the Land Speeder!," part of Series III, presented kids with yet another iconic Star Wars moment to -- erm-- puzzle over during rainy afternoons.

As the above image demonstrates, a variation affects the Series III puzzles. Specifically, they can be found with the Kenner logo either in the lower right corner or interrupting the bottom of the "racetrack." Note that the corner-logo version omits the age ranges.

Well, at least  the 140-piece Series III puzzles can be found in either style. I've yet to find evidence that the 500-piecers from this series exist in logo-in-the-corner versions. All the examples I've seen feature the logo in the racetrack. 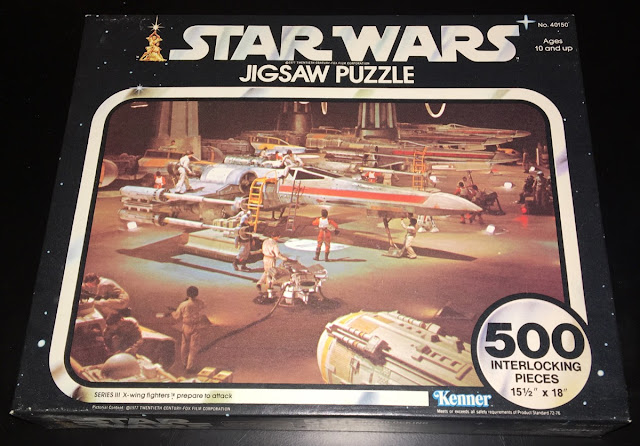 "X-Wing Fighters Prepare to Attack" is one of my favorites. 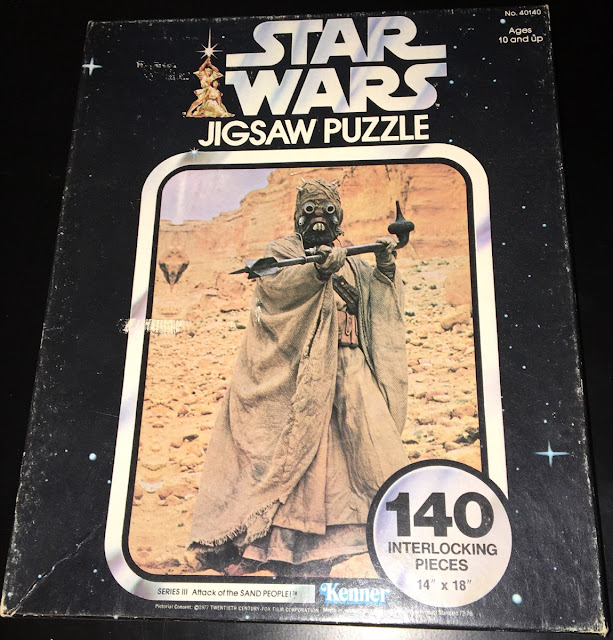 Given the limits of the material Kenner was working with, it's a little surprising that this is the only puzzle that utilizes one of the images used on the company's action figure cardbacks. Note the mirroring effect used to extend the image on the left side. 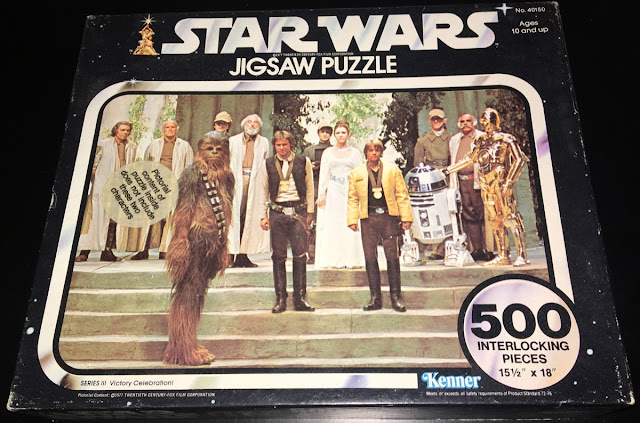 Surely the most interesting puzzle released in Series III is this one: "Victory Celebration." As you've no doubt noticed, its box features a sticker that says "pictorial content of puzzle inside does not include these two characters."

It appears the folks at Kenner cropped the photo when producing the puzzle, but forgot to do the same when designing the box. 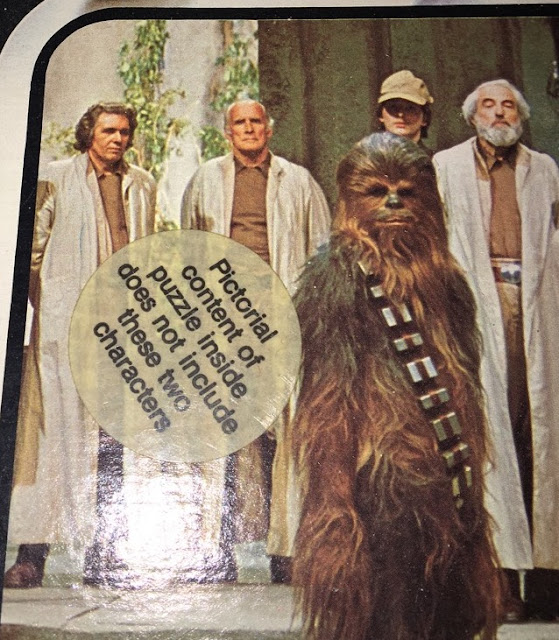 Okay, so maybe those two guys aren't the most exciting-looking fellows. And yet I find them intriguing.

In particular, the guy on the left, whom I call Space Force Thomas Jefferson, has all the gravitas needed to pull off his hairdo. 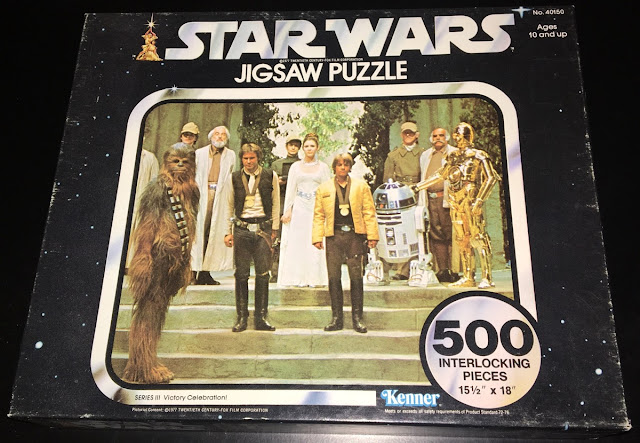 Naturally, Kenner corrected the error by issuing this puzzle-accurate box.

I wonder: What did those two guys on the left do to warrant expulsion from the Star Wars toy universe? I don't know about you, but I find this example of Stalinistic historical revisionism to be more than a little disturbing... 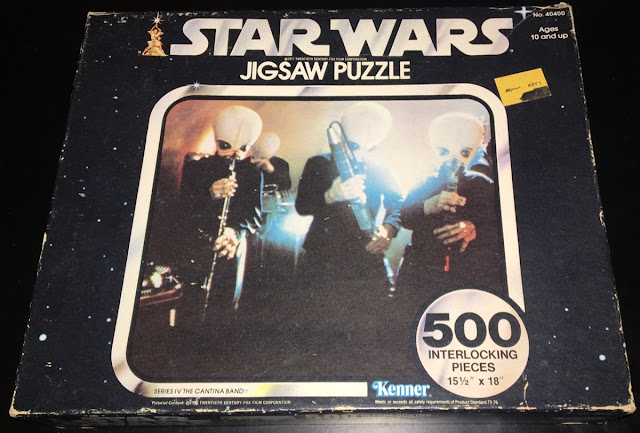 Series IV was the final series of 140- and 500-piece Kenner puzzles. My rough impression is that the puzzles in this series are a little tougher to find than those in the other series.

The title of this example, "The Cantina Band," pretty much says it all. 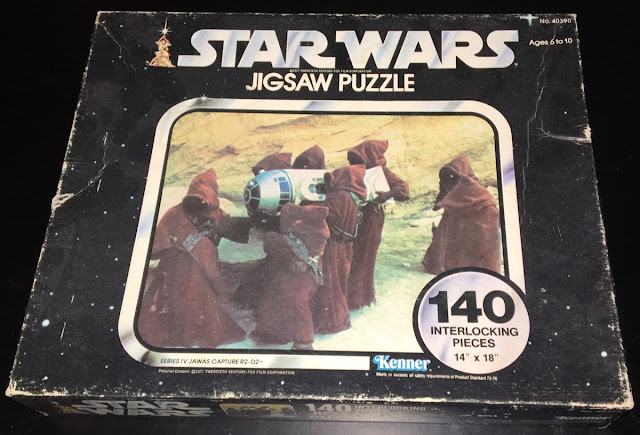 You know, it never occurred to me until now, but this must have been a hard scene to shoot. All those costumed children and little people carrying the R2 prop and trying not to trip over something. And having to do it while being "faster, more intense." 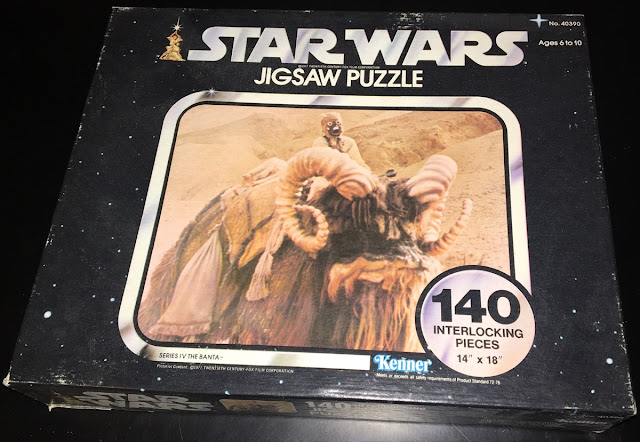 Kenner never made a Bantha toy, but they did make this Bantha puzzle...though they blew their big moment in the spotlight by misspelling the creature's name. Their title refers to it as "The Banta." 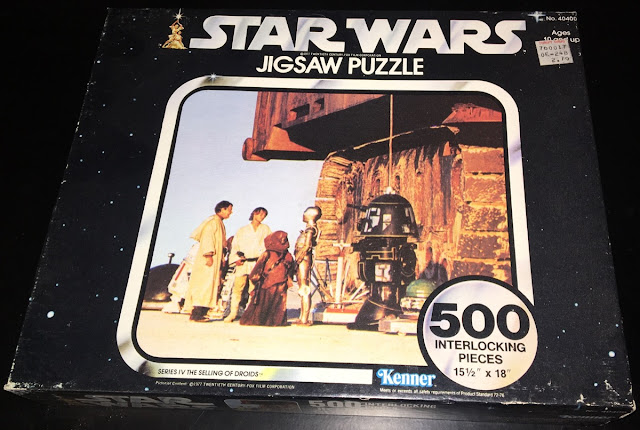 Rounding out Series IV, and confirming that the series was an all-Tatooine affair, was this puzzle, "The Selling of Droids."

As far as I know, the Series IV puzzles do not exhibit a variation with respect to the placement of the Kenner logo. All the examples I've seen feature the logo in the racetrack. 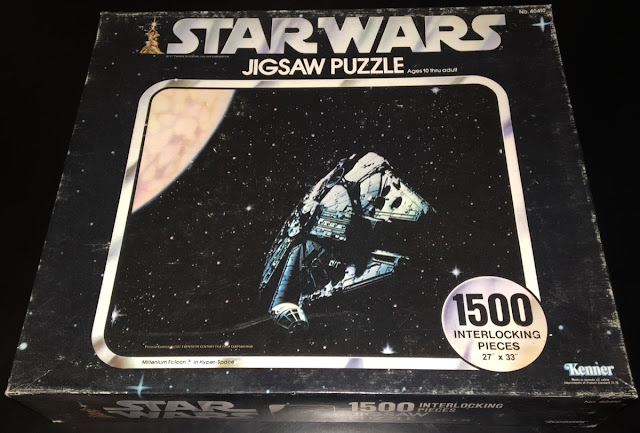 While looking at the above-pictured spread from the 1979 catalog, you may have noticed that puzzles of a larger size were introduced in that year. They consisted of a whopping 1,500 pieces, suggesting they were aimed at the lucrative incarceration market. Because who but an incarcerated criminal had the time to put one of them together?

The title of the puzzle pictured above, "Millenium Falcon in Hyper-Space" is not only partially misspelled, it's inaccurate, as it appears to show the Falcon just kind of floating there. 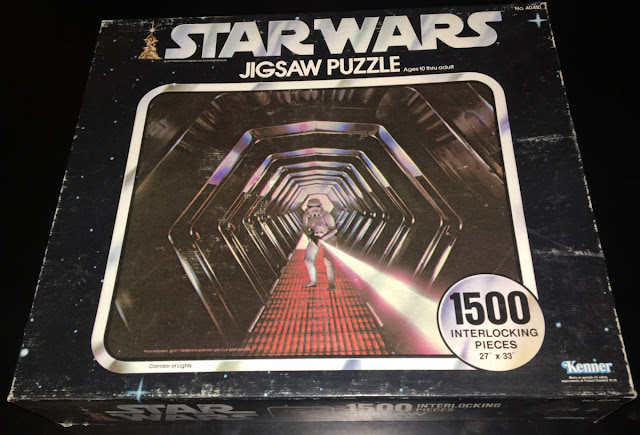 Finally, we have "Corridor of Lights," featuring a rather odd composite image of a Stormtrooper firing his blaster within the Death Star's prison corridor. The image was also featured on one of Kenner's wholesale catalogs.

Well, that wraps up our look at Kenner's Star Wars puzzles. If you're looking for a one-shot overview of what I know to have been available, see the above chart (click to enlarge). Possibly I've failed to account for some variations? If so, shoot me a message and let me know. I plan to follow up with a look at the puzzles released in Canada by Kenner's sister company, Parker.

Okay, so I was wrong that the Attack of the Sand People! puzzle is the only one to utilize the image from the Kenner action figure line. As Skye, Steve, and Scott point out in our podcast, modified versions of the images used on the puzzles were employed on the packages of several of Kenner's early action figures. Nitpicking: It's what we do.
Posted by Ron at 10:11 AM