A few weeks ago I published a post on Kenner's line of jigsaw puzzles of 1977 through 1979.

Canadian collectors of the late '70s also had the opportunity to purchase Star Wars puzzles. In Canada, however, puzzles weren't marketed by Kenner Canada; rather, they bore the logo of the company's affiliate, Parker.

Their boxes also bore the French term for "jigsaw puzzle," "casse-tete," which I believe means something like "headache" if translated literally.

Is this the only Star Wars toy named after an actual ailment? Does Prune Face count? 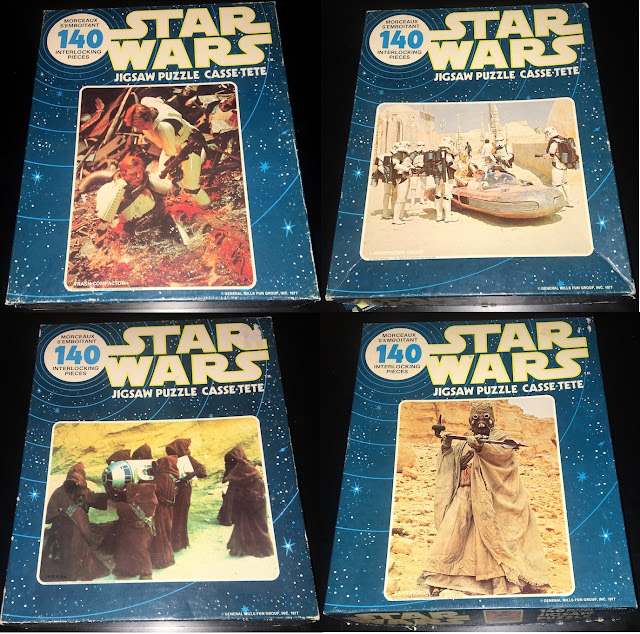 You might recall that Kenner's initial assortment of puzzles came in boxes that were uncharacteristically colored. Some were blue and some were a shade that I dubbed "electric mauve."

One of the fun aspects of the Parker puzzles is that they all came in fruity-looking boxes; none sported the familiar black-and-silver deco scheme that we now associate with vintage Star Wars products of the 1970s. This makes them worth seeking out, especially if, like me, you enjoy the funky head shop quality of those blue and mauve boxes.

I'm not going to devote much space to discussing each puzzle. For the most part the photos speak for themselves. And, generally speaking, the Canadian puzzles repeated the American ones in terms of design.

You may, however, notice a few slight discrepancies. For instance, note that the puzzle depicting the Sand Person features a picture that has been flipped through the vertical axis. On the U.S. puzzle the business end of that gaffi stick was on the left rather than the right side of the image. 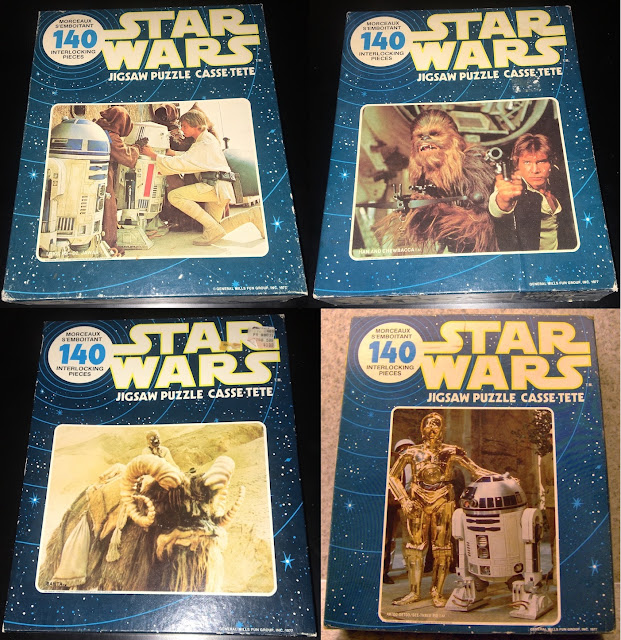 The image showing Luke leaning in to make out with R5-D4 was similarly flipped on the Canadian version.

Curiously, the electric mauve puzzle boxes featured the Parker logo on their fronts while the blue ones did not.

Note that the Canadian puzzle depicting the medal ceremony is once again flipped relative to its American counterpart.

Incidentally, no "extended box photo" variation of this puzzle was released in Canada, meaning that none of the Parker boxes depicted those two stick-in-the-mud-looking guys whom my co-blogger Yehuda Kleinman calls Rosencrantz and Guildenstern. 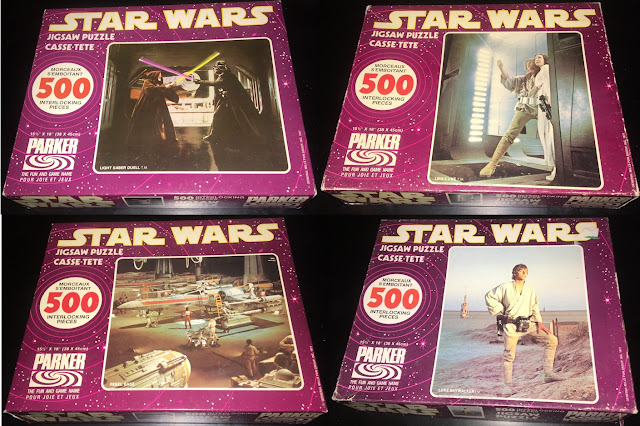 Another flipped image relative to the U.S. was in evidence on the box of the puzzle depicting the Rebels' spacecraft inside their secret base. 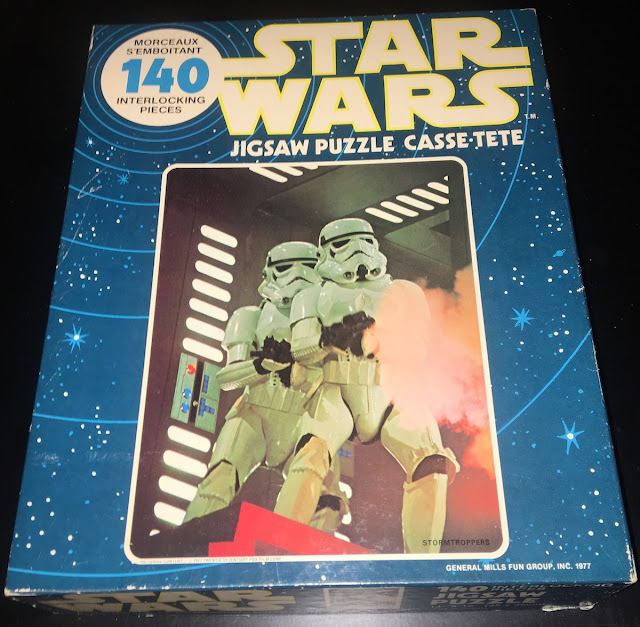 In my post covering the American products, I noted that the Sand Person puzzle was the only one to use an image featured on Kenner's action figure blister cards.

The Canadian line adds one more: the Canuck Stormtroopers puzzle employed a photo that will be familiar to toy collectors who've pursued the carded figures. The photo on the puzzle, however, retained the original background, airbrushed out on the action figure packaging, and was flipped through the vertical axis.

If you look closely you'll see that the title of the puzzle was misspelled on the box.

Yes, you've been introduced to the Stoom Trooper. Now meet the Stormtroppers.

Oh, I've gone and buried the lede. The Stormtroppers puzzle is of interest in large part because it was not released in the States. It was a Parker exclusive. 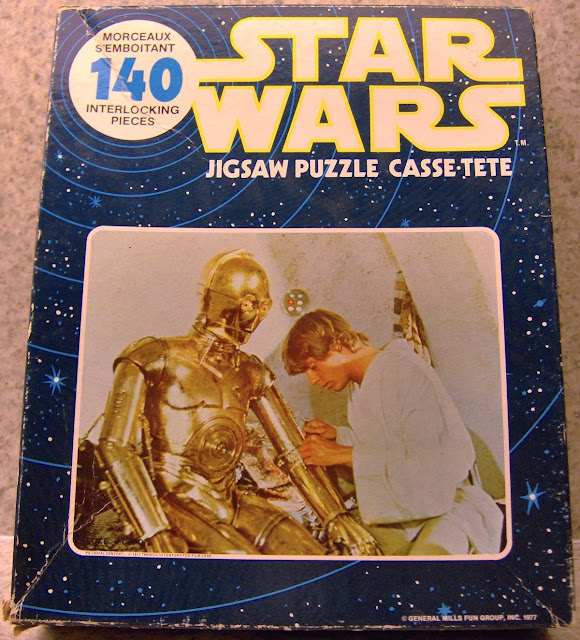 Do you think this is the least exciting photo used on a Star Wars puzzle? I do. Maybe that's why Kenner didn't release a puzzle featuring this image?

I thought this was the only puzzle released by Kenner or Parker to lack a title printed on the front of the box, but Scott Bradley has pointed out that the box does have "Luke - C-3PO" printed in black text at the bottom left of the image. 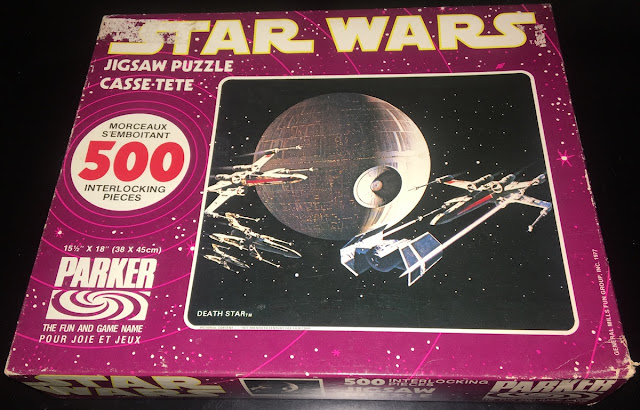 The third and final Canadian exclusive was this puzzle, titled "Death Star." It featured a pretty unusual composite image of X-Wings and Darth Vader's TIE Fighter zooming around in space.

Did this image appear anywhere else? It strikes my eye as pretty unique. Shoot me a message or post in comments if you've seen it on another product or in a publication. 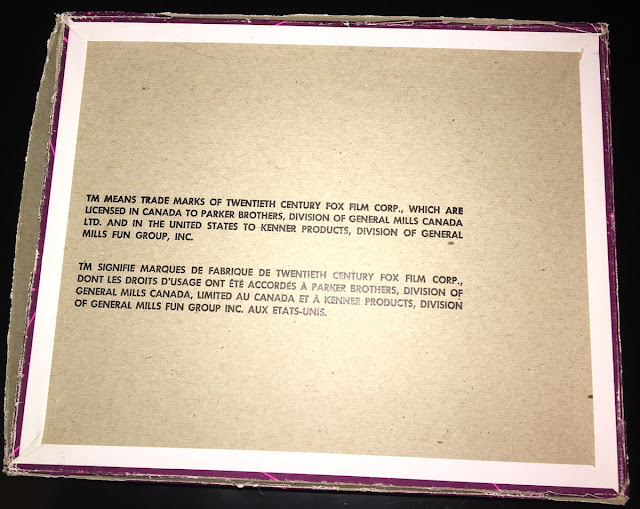 The only one I'm aware of concerns the trademark notice, which on at least some puzzles appears stamped onto the reverse of the box rather than printed within the graphical overlay on the side.

Which puzzles exhibit this variation? Was the error corrected? I'm not sure. But these are questions to keep in mind while pursuing these items. This particular instance occurs on the Space Battle puzzle, which was one of the earliest designs released by Kenner in the States. It's possible that this issue affected only the earliest of Parker's puzzles. 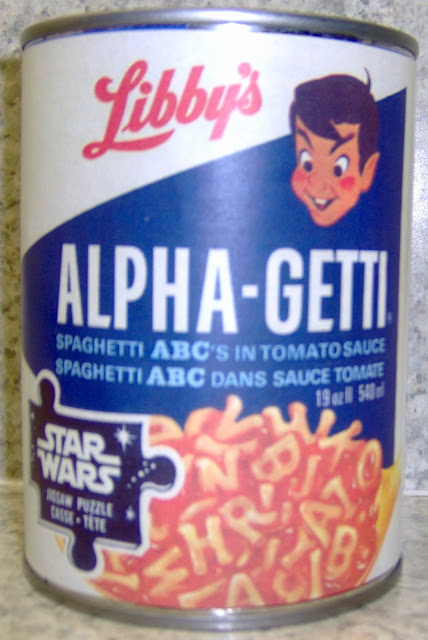 As mentioned above, Canada saw the release of three unique puzzles.

But that's not all the puzzle uniqueness bestowed upon our excessively polite friends to the north. They also benefited from a promotion that allowed the consumers of Alpha-Getti to mail away for two different puzzles.

Marketed by Libby's, Alpha-Getti was a pasta product that was shaped like letters. Presumably, this allowed children to spell out a ketchupy "help me" should they be forced to eat it by the giant sea anemone that served as Libby's mascot.

In case you're wondering, Alpha-Getti has no connection to Ceti Alpha V, where Khan was banished to live out his final years with no one to keep him company but some gross ear worms and those sidekicks who looked like extras from a post-apocalyptic aerobics video. 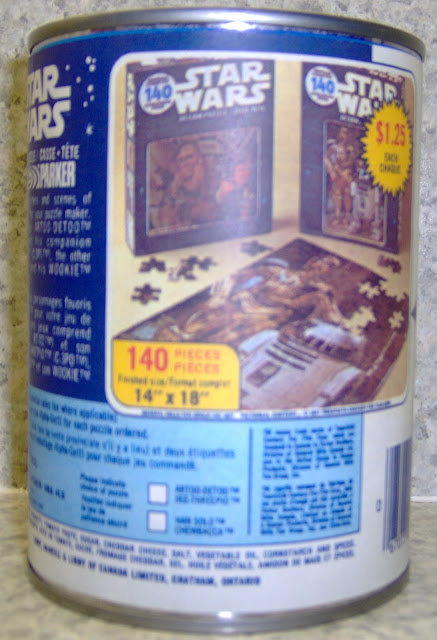 According to our friend Scott Bradley, the man responsible for the essential Canadian Star Wars Gallery:


Libby's Canada sponsored a mail-in offer in 1978 for two of the Canadian Parker Star Wars puzzles - R2-D2 & C-3PO as well as Han & Chewbacca. Consumers would send in $1.25 (plus provincial sales tax where applicable) as well as two labels from any size can of Libby's Alpha-Getti for each puzzle requested. The offer came on cans of three different sizes - 8 oz fl/227 ml, 14 oz fl/398 ml and 19 oz fl/540 ml. Oddly enough, this promotion almost never took place. From the book: "Star Wars: From Concept to Screen to Collectible" pages 114 and 116 (Stephen J. Sansweet, 1992, Chronicle Books):

Lucasfilm's interest in promoting only healthful foods also led to an initial turndown in 1977 of a Canadian promotion featuring an offer for a Star Wars puzzle on labels for Libby's Alpha-Getti, a canned spaghetti product. Libby's appealed, noting that its product was "a regular menu item for patients at The Hospital for Sick Children in Toronto." A compromise was struck. The promotion could proceed if Libby's also ran it on labels of an even more nutritious vegetable or tomato juice product.

Maybe those kids were sick because they were eating Alpha-Getti?

By the way, I'd love to acquire one of these Libby's cans. So if you have one that you don't need, please let me know!

And if you get a chance, head over to Scott's website, where he has lots of information on Canadian products, including the puzzles discussed here. Scott helped me out on this post by providing photos of the Libby's can and the Canadian puzzles that I don't have in my collection. Thanks, Scott!

Here's a chart I put together showing all of the Canadian puzzles. The years are approximations.

That's all I have on puzzles. Does your head ache yet?

Food collector Jonathan McElwain was kind enough to send me the below scans of several Alpha-Getti labels: specifically the 8 oz, 14 oz, and 19 oz examples, as well as a close-up of the puzzle offer.

Enjoy. And thanks, Jonathan! 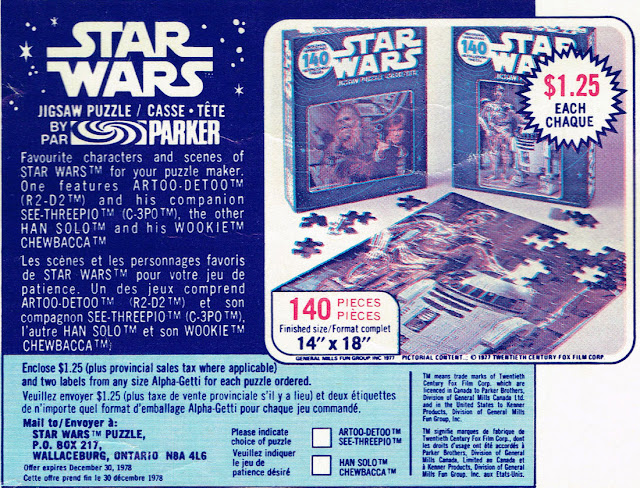 And Steve Danley noticed that the same image is present on one of Kenner's in-pack catalogs from the late '70s.
Posted by Ron at 9:54 AM