In Canada, they made you take a math test just to participate in a soft drink promotion. Did you know this? I didn't -- until, that is, I read the below article by guest blogger Trevor Mcconville. You're probably thinking what I'm thinking: "There's no math in Star Wars!" Well, here's Trevor to argue to the contrary.

In the summer of 1978, Coca-Cola became one of the very first licensees to do a Star Wars-related beverage promotion in Canada. With an original end date of August 11, 1978, later extended to October 27 of the same year due to its success, the promotion entailed matching pairs of Coca-Cola bottle-cap liners for a cash return. The bottle-caps featured an etching of C-3PO on the top, with variations in either a "Coke" or "Coca-Cola" logo above, the same variations also found on the bottles themselves. The underside of the caps held a gray liner that could be peeled off to reveal a line-art portrait of your favorite Star Wars character. 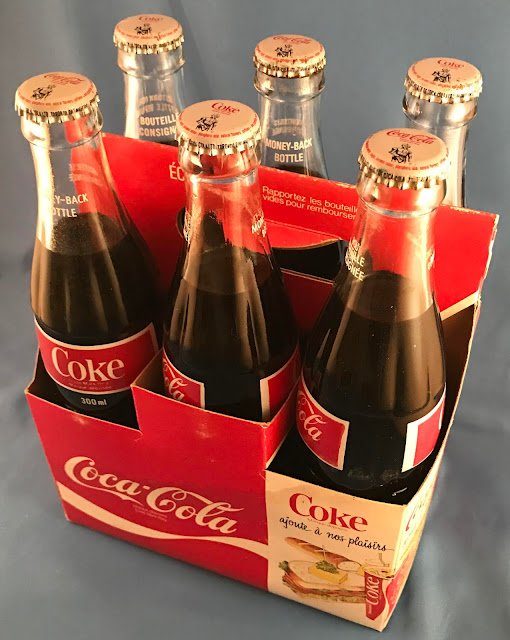 The following eight liners were available in the range: Luke Skywalker, Princess Leia, Obi-Wan Kenobi, Darth Vader, Han Solo, Chewbacca, C-3PO, and R2-D2. Shown above is the set of liners, both bottle-cap variations, and a six-pack of the Coke bottles featuring the C-3PO caps.

A pair of Han Solo and Chewbacca could be found in every 36 bottles of Coca-Cola, yielding a return of 25 cents.

A pair of Obi-Wan Kenobi and Darth Vader could be found in every 48 bottles of Coca-Cola, yielding a return of 50 cents. 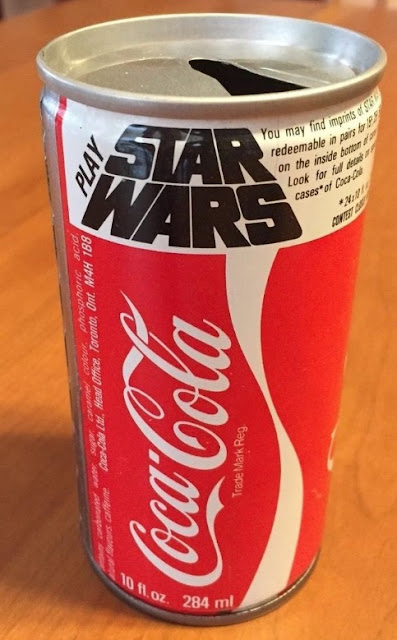 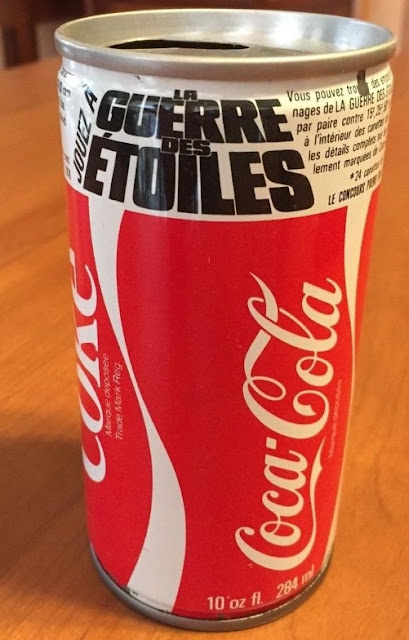 A pair of Luke Skywalker and Princess Leia could be found in every 169 bottles of Coca-Cola, yielding the most profitable return of one dollar. 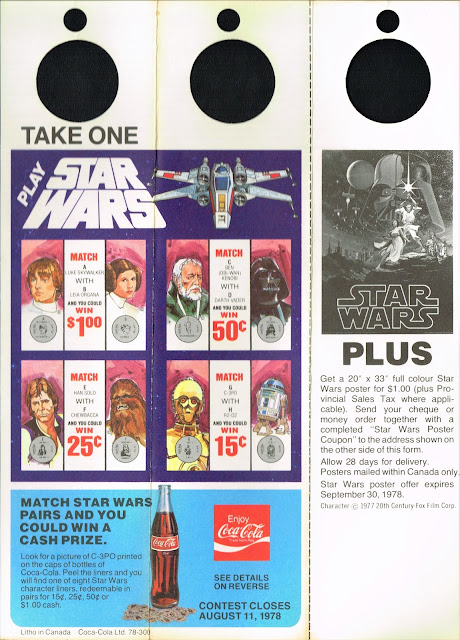 By far, the rarest item from this promotion is the Coca-Cola soda can. Known to have come in a 10-oz size, the can featured the same character images from the bottle-caps printed on the bottom of its interior; these could be matched in pairs for the same cash prize. Along with an advertisement for the promotion on the label, the can featured the Star Wars logo in both English and French.

Included in the promotion was a handful of paper material featuring the contest. Shown above is a small double-sided paper hanger that would have hung on three bottles of Coca-Cola found in a six-pack. It measures 6.5" x 8.8". The hanger advertised both the bottle-cap pairs and an offer allowing consumers to send away for a Star Wars poster for one dollar. The poster was the popular commercial poster featuring the art by the Hildebrant brothers, at that time available through Factors. 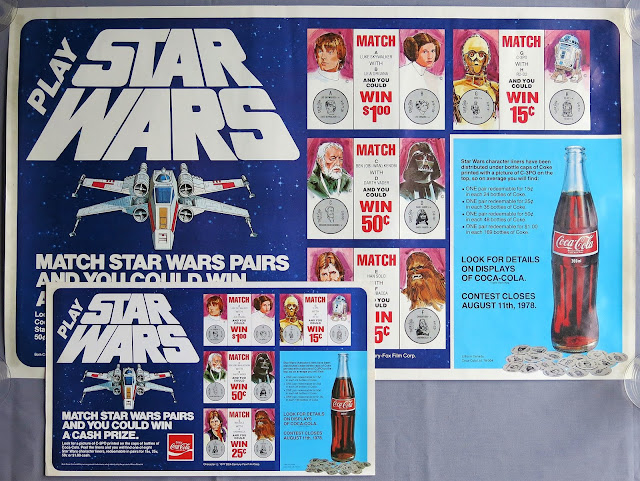 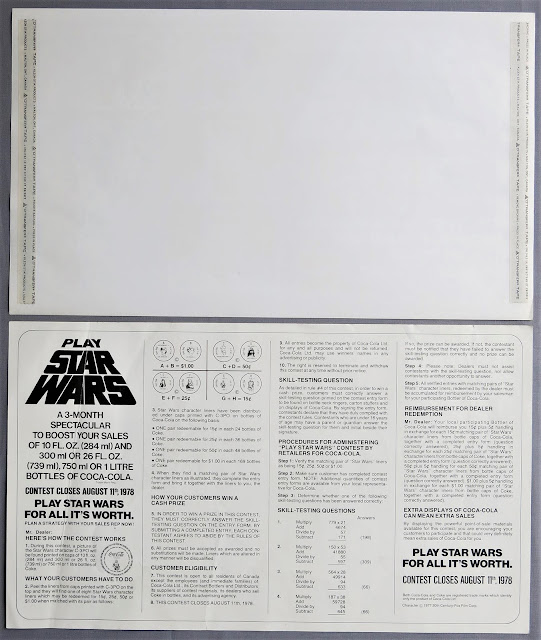 Seen above is the mini counter poster, measuring 8.5" x 14.5", and the larger poster measuring 27" x 16". The mini poster came in single and double-sided variants. The double-sided poster with the text on the back would have been kept at the counter with the store owner. The larger single-sided version came with two adhesive strips on the back, allowing it to be attached to a wall or door. The double-sided poster featured information concerning the promotion on its back. This information included "Here's How the Promotion Works", "What Customers Have to Do", and the infamous "Skill-Testing Question." Answering this question was the final task in completing your request to receive a cash return. Though I'm not sure why this was chosen as the final requirement, lucky participants under the age of 16 were permitted to receive help from a parent.

A much rarer paper item from the promotion is the small display poster printed on a much thicker cardstock, measuring 60.5 x 25cm. This was printed on thicker material to be used as a floor display in stores. It could take the beating of being stepped on.

With promotional material on the counter, shelves, floors, and door, this promotion is testament to the fact that by this time Star Wars mania had made its way into most aspects of consumer life. It also demonstrated that Coca-Cola was ahead of the game in taking advantage of the Star Wars franchise. Unfortunately, in October of 1978 this promotion came to an end. While Coca-Cola continued to sponsor food promotions in the United States throughout the Empire Strikes Back and Return of the Jedi eras, this specific promotion would not again see life in the regions to the north.

My sincerest gratitude to fellow collectors Jonathan McElwain, Clint Garness, Lance Worth, Scott Bradley, and Pete Vilmur for providing both images and information to this entry.
Posted by Ron at 8:08 AM