One of the ongoing features of the blog will be "digests" of newly added entries to the Archive. In the future, direct links to the entries will also appear on the main SWCA rotator. This introductory post highlights the most recent additions to the Archive from the month of May, 2014. 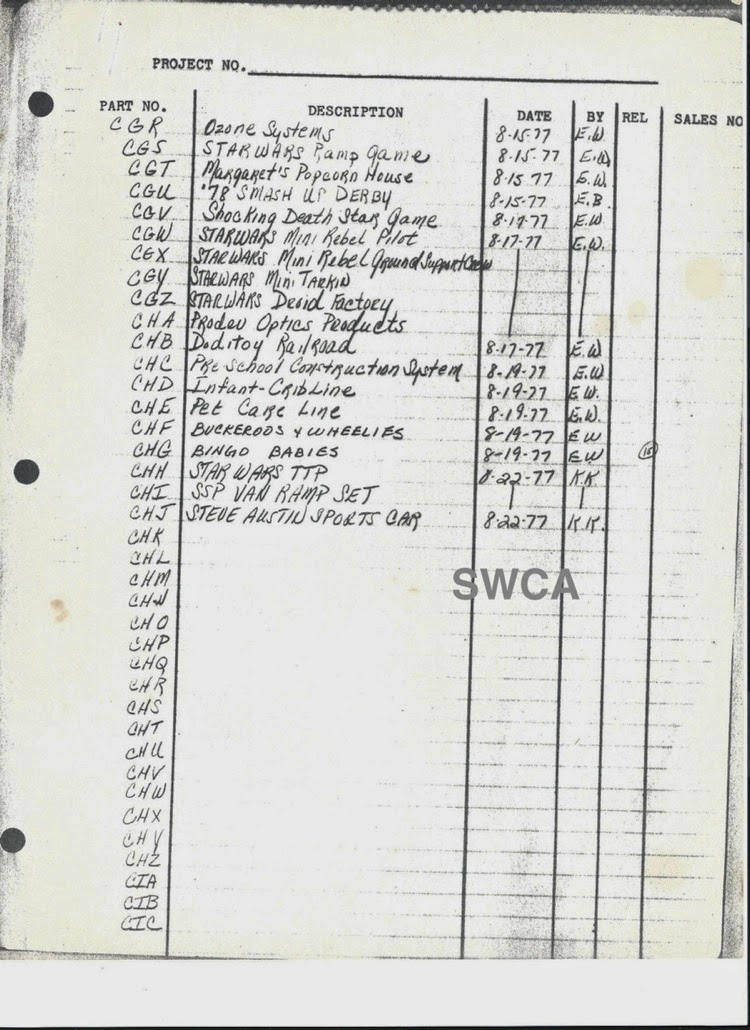 Collectors have been speculating about a vintage Grand Moff Tarkin action figure for years, but evidence that the character was even considered for release as an action figure has always been scant. Aside from this late, post-POTF item, there hasn't been any indication that Kenner seriously considered or worked on a Tarkin toy -- until now.

This list of proposed products from 1977 surfaced with a host of other pieces of Kenner paperwork in a find you can read about here. It references a few Star Wars items that were actually made, like the X-Wing Pilot figure (later marketed as a Luke Skywalker toy), Droid Factory playset, and the rather obscure double van set. However, several of the referenced toys never saw the light of day.

As the above "product list" demonstrates, people who love piecing together Star Wars toy history love internal Kenner paperwork. Sometimes a single piece of paperwork can shed light on a mystery that collectors have been trying to solve for years. Here are a couple of gems from the collection of Ross Cuddie. 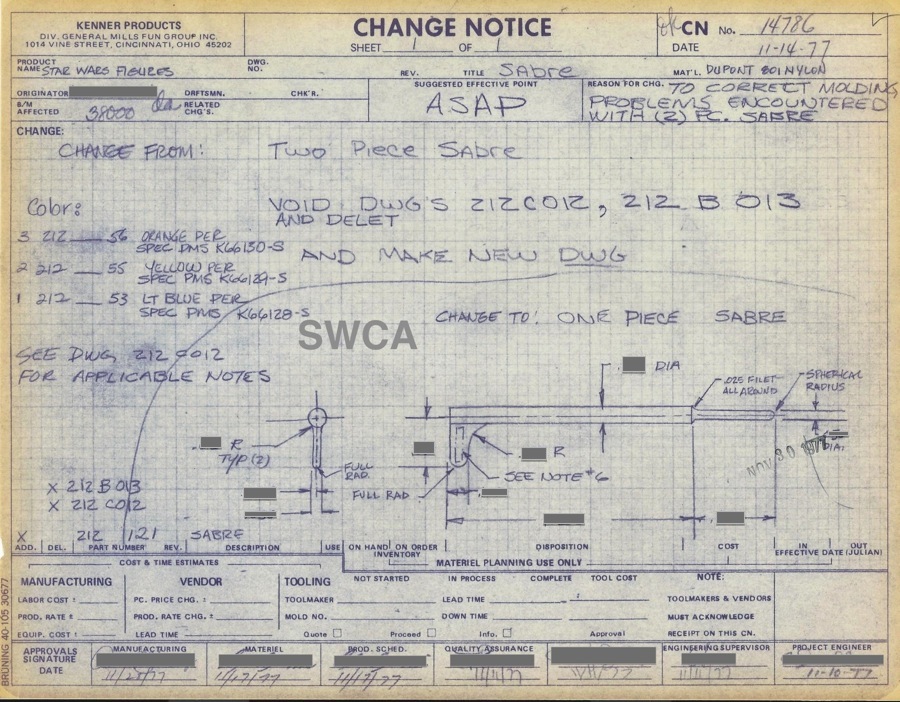 This "change notice" relates to one of the most familiar of Star Wars action figure accessories, the non-telescoping version of the slide-out lightsaber, which came packaged with Darth Vader, Ben Kenobi, and the original version of Luke Skywalker. It reveals that the original "double-telescoping" version of the part was ditched and replaced with a simpler one-piece model due to "molding problems" encountered during mass production.Be sure to check out the full entry for a great story from Ross. 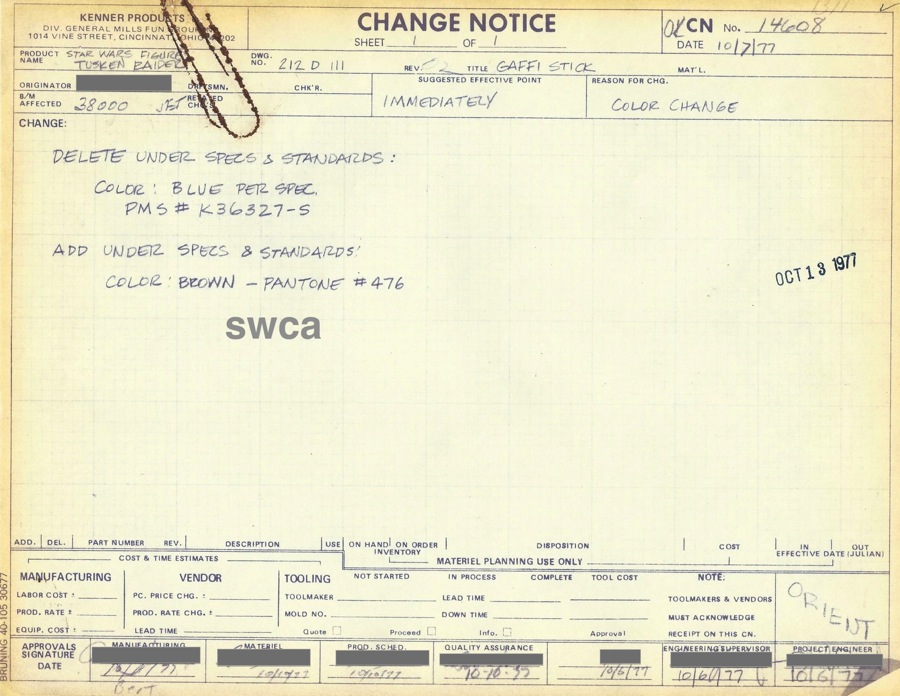 This piece of paperwork related to the Tusken Raider action figure reflects a pre-production change to the color of the "gaffi stick" accessory with which the toy came packaged. Specifically, it reveals that the accessory was initially planned to be injection-molded in blue plastic, quite likely similar to similar to the steely, dark-toned blue that was used for the guns of many Empire Strikes Back-era action figures. 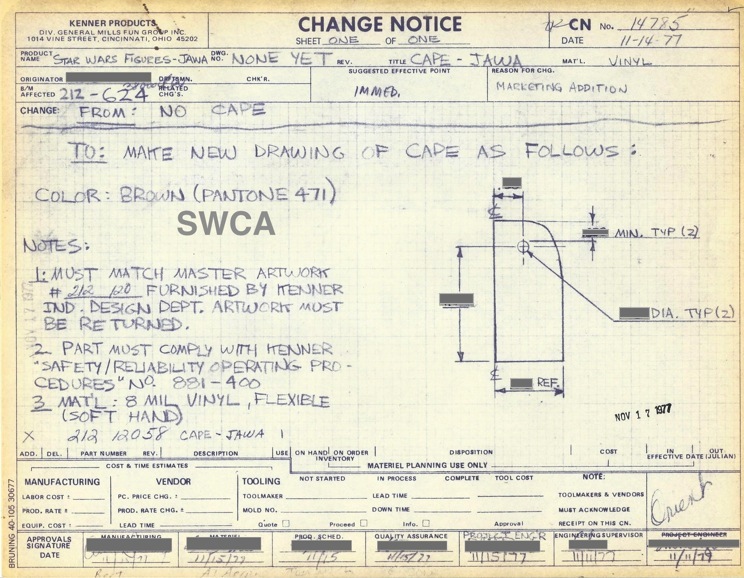 Where internal Kenner paperwork is concerned, it's hard to get more iconic than the piece you see here. "Iconic" is certainly the right word -- because this item not only provides new insight into one of most famous of all action figure variations, it redefines our very sense of it. For years it was believed that the Jawa figure, first released in 1978, was intended to come packaged with a vinyl cape, and that the cloth variation was the second, modified iteration of the toy. It turns out that's not exactly right... 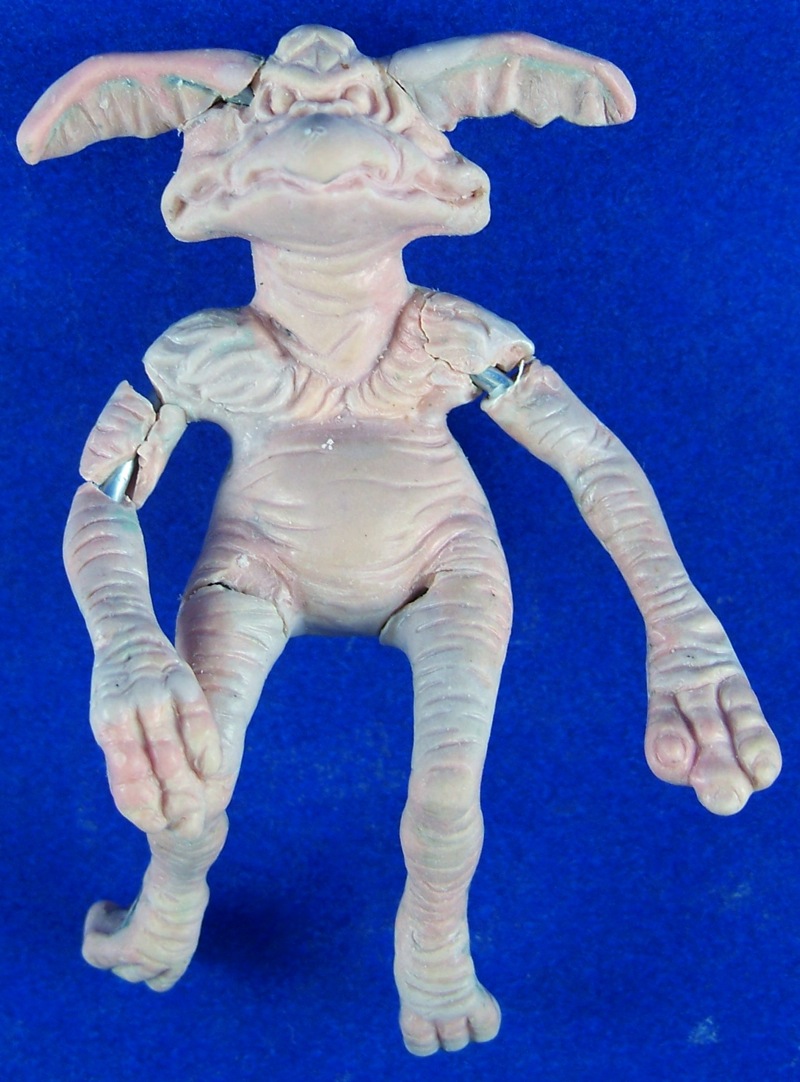 Does Salacious Crumb count as an action figure? Debatable, though there are some collectors that argue that he's definitely a part of the standard figure line. Gone are the days when the Crumbs and the Dianogas of the world were relegated to the back of the action figure carrying case, treated like second-class citizens by the whole of the articulated majority. Figure or not, it's pretty hard to imagine the vintage line without a Crumb of some kind. And since the hunk of unarticulated, yellowish PVC that Kenner gave us back in 1983 is all we got, it seems that we have to be appreciate the little guy, even if there isn't much "action" to be found in him. Anyway, what you see here is the original wax sculpt for the Salacious Crumb non-action figure. It's the master used to produce every one of the bagged examples you can still find on eBay at bargain prices. Check out the entry for photos of some related Crumb-y items.

Seen here is what must be one of the earliest production samples of the carded Han Solo action figure. It's identical to a regular Han 12-back A (the debut version of the Star Wars cardback), except for the presence of a sign-off notation in the white pricing area. The date is March of 1978. There are a number of legitimate QC samples floating around out there. However, collectors need to be very wary of fakes, as it's beyond easy for someone to write on a carded figure and then try to pass it off as something special. This one was purchased directly from a former Kenner employee, so there are no doubts as to its authenticity.

Posted by Stephen Danley at 2:03 PM