Worth a Trip to the Store

One of the ads I uncovered while working on the SWCA's Newsstand section is this Sears ad from November 1979: 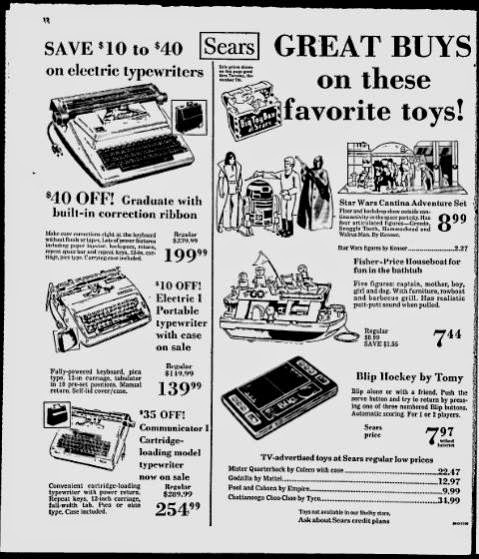 While at first glance, it might not appear all that interesting (unless you're shopping for a good deal on electronic typewriters), a second glance reveals something else:

One of the toys on sale is the Star Wars Cantina Adventure set, but the figures which Sears chose to show posed next to the toy in question are rather unique. What Sears has done is taken an image of a very early version of the Kenner line and created their own lineart of it.

Sears is basing their depiction of the figures on the first conceptual models which Kenner ever created for Star Wars toys. Kenner used Fisher Price Adventure People as a base and did quick kitbashed versions of what the line might look like.  We have a better look at these early concepts here: Mock-Up Star Wars Figures. No other images of the Fisher Price Adventure People mock-ups were known to exist, so it's rather amusing that collectors could have opened the newspaper any time in the past 35 years and found new images of them.

So, what we have here is a department store advertisement which is using very early conceptual images of the toys. Just how Sears got a Kenner image of an early internal version of the toys is unexplained. Whether Kenner sent it to them for some reason or if Sears got the picture by some other means has not been determined. Your guess is also as good as mine as to why a store would use the image in an ad even if they were able to somehow obtain it, especially since by the time the ad ran, the toys had already been on store shelves for quite some time. Anyone paying the least bit of attention would have seen that the early mock-up figures looked nothing like the finished product, but I guess Sears decided that it didn't really matter. Personally, I'm glad they did.  It's just one more reason to love old newspaper ads.

I'm thinking of going into Sears and trying to get a raincheck on a set of Star Wars Adventure People mock-ups. Those would definitely be worth a trip to the store.
Posted by Unknown at 4:40 PM