The SWCA Through the Years

As we take notice of the 20th anniversary of the Archive, it might be fun to look back at how the site appeared in the early days.

The basic look of the Archive's front page goes back to a terrific design that John Wooten put together in 2000. That put all of the links off to the side, with the central area being devoted to a sort of mission statement, a feature call-out graphic, and links to news and polls. Prior to that the looks featured on the front page were a combination of scroll-through lists and simple tables. In the very early days the front page utilized the infamous marble background, which remained in use on the entry pages for many years.

You can get a sense of this evolution by referencing the WaybackMachine at this link. The referenced page is a commemoration of the Archive's millionth documented hit, which occurred in 2001. You can view a version of the front page that references the milestone here.

Browsing WayBack's snapshots of the site during the year 2000 is especially interesting. This was one of the Archive's most active periods, and you can see the design and advertised features changing regularly.

For a while the front page used animation. When you scrolled over various links, the image in the coin area would change to reflect the category. We got rid of that due to bandwidth concerns. We also got rid of the splash page. Anyone remember that? You can see it below. 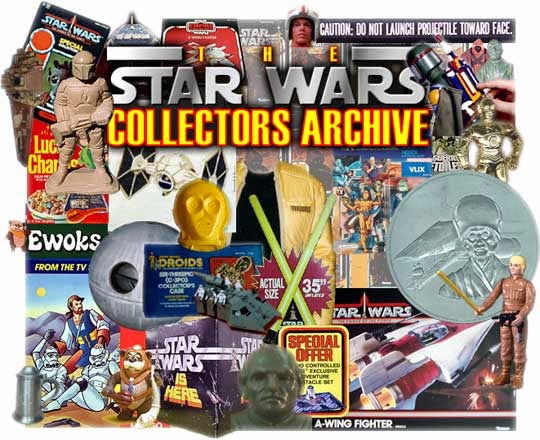 There have been several URLs as well. Most probably recall the site being located at toysrgus.com, but the earliest address was  http://www.cs.washington.edu/homes/lopez/collectors.html.

Finally, here's Gus' original announcement on rec.arts.sf.starwars. Poor Mark Nelson wasn't even sure what the world wide web was. He wasn't alone. Someone had to explain to me what a "browser" was after I tried and failed to access the Archive.
Posted by Ron at 9:10 AM