This is the Star Wars Community Digest, your place to get summaries about what's going on in the Star Wars collecting community across all of the forums and Facebook groups. We will present the news and current events each week, so that you don't miss anything. Please be aware that many of these are closed Facebook groups though, which means you will need to join them in order to read the conversations.  But don't worry, it's free and almost instantaneous.

In any case, lets get right down to it and get everyone caught up to date on what they may have missed these last 2 weeks...


An Urban Legend is Proven True! 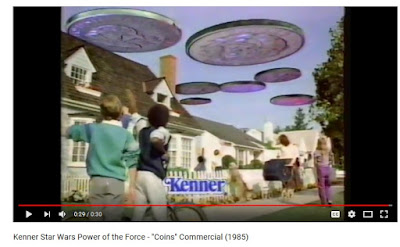 We had another top story this week, but then something came up which made us completely re-edit.  A few short days ago, it came to the community's attention that after decades of searching, the long-lost TV commercial for the vintage Power of the Force coins has finally been found!

I don't think anyone really expected this to happen, and many collectors were convinced that it never existed in the first place. But it's here now. And it's freely available for everyone to see, which is even better.

Here is the link to the commercial:
The POTF Coin Commercial on Youtube

Thread on it:
POTF Commercial thread in the POTF Group 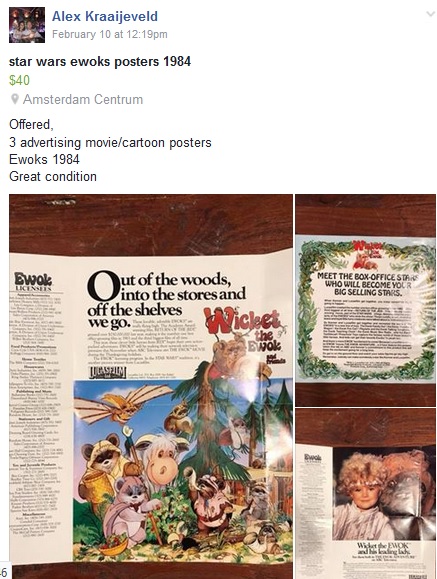 An interesting item was posted for sale in the Vintage Star Wars Action Figures group. The listing was mostly overlooked by the community, but it was quickly snapped up by friend of the SWCA, Jarrod Clark, who recognized what it was. This flyer was a pack-in with a very rare salesmen sample for the Ewok preschool line.

According to Jarrod though, the flyer with Wicket and Cindel isn't believed to be from that set. Its origin remains unknown, which is always neat. There aren't too many mysteries left in the vintage Star Wars world, so it's newsworthy when one shows up, particularly when it's connected to another very rare item.

The For Sale post can be seen here:
star wars ewoks posters 1984

For further reading on the kit this flyer was a part of, read this entry on the SWCA:
Preschool Ewoks Promotional Kit/Playset 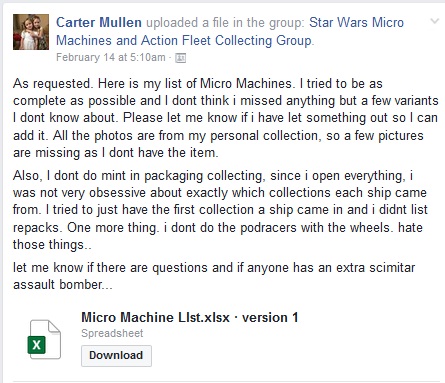 The Micro Machines lines are often overlooked by collectors. There were a lot of them released, they're sometimes difficult to distinguish from one another, and many of them are quite inexpensive. As such, it is often hard for collectors to even know precisely what was released and what wasn't, to say nothing of what variations are known and how they were marketed.

That's why this post in the Star Wars Micro Machines and Action Fleet Collecting Group is so interesting. Because a collector has worked up a spreadsheet of all of that information, and then distributed it for free to the community. Which is pretty cool. Even if you're only marginally interested in the Micro Machines lines, it might be worth taking a look just to get a better idea of what's out there. 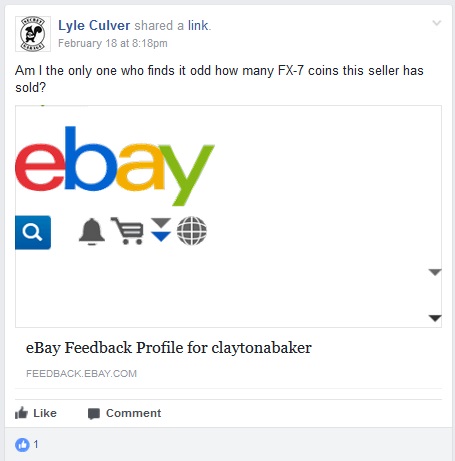 Here's an interesting thread: a seller on eBay has sold at least a dozen POTF coins recently. While that in and of itself is not newsworthy, the fact that they were all FX-7 (a very rare coin) is troubling. The Star Wars: POTF (Last 17) Vintage Collecting Group 1985 discusses this, debating whether or not it's a scam.

The full thread can be found here:
FX-7 Coins are Questioned

The Rebelscum Forum Warns the Community 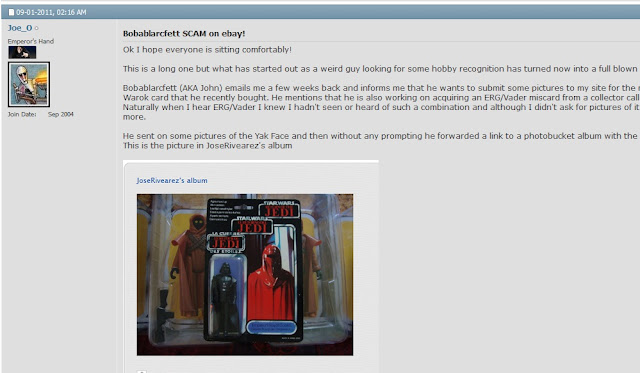 The members of The RebelScum vintage forum have maintained a list of usernames and aliases used by one particular seller accused of scamming collectors. The list has gone on for years, filling with dozens of different names. Now, it seems, the seller in question has returned and is once again selling on eBay.

Hats off to Joe_O for remaining vigilant and dedicating so much of his time to protecting the community.

The full thread can be found here:
Bobablarcfett SCAM on ebay!

Is the Best Worth the Price? 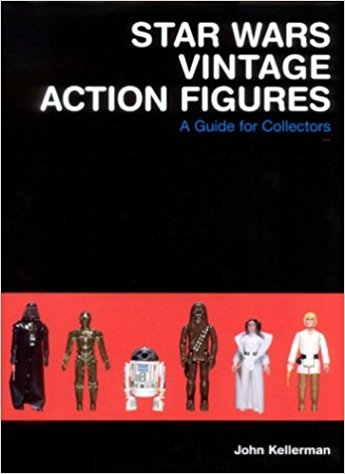 There are a lot of books about vintage Star Wars collecting and almost all of them have their pluses and minuses. We encourage all collectors to maintain a complete and ever-growing reference library. For many collectors though, there is only one entirely necessary book: John Kellerman's Vintage Star Wars Action Figures. First released in 2003, the book almost immediately became the Collecting Bible for a lot of collectors.

Since the book is now out of print, its status has only increased its selling price. For example, it's for sale on Amazon right now in used condition for $899. As such, there is a growing divide in the community between collectors who see the book as *the* book on Star Wars collecting no matter the price, and those who are unwilling to invest the $350-$800 in owning it. And for some reason, that topic has been discussed in a couple of different threads recently.

Vintage Experts Give a Live Panel on Sculpts 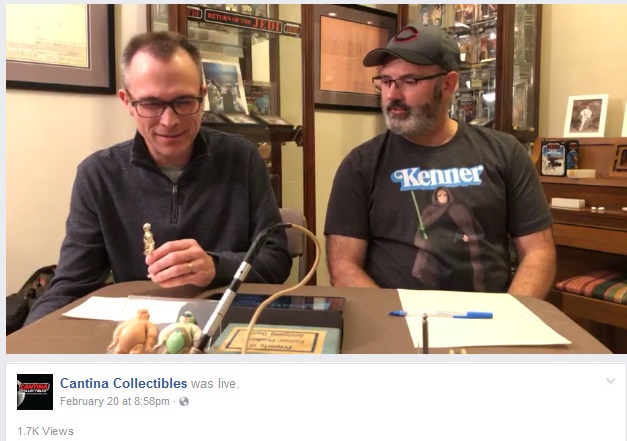 Collectors Bill Wills and Tracey Hamilton held a Facebook live-stream last week, showcasing some of the incredible items in their collections, as well as providing all kinds of valuable behind-the-scenes information on the production process used at Kenner in the vintage era. Want to know how the figures were sculpted? Well, there's one sitting on the table in front of them. And they'll tell you all about it, then sell some of the tools Kenner's sculptors used to create it and others.

If that wasn't enough, they also gave away a bunch of items for free, which is always cool to see.

A lot of collectors have live-streams. This is one of the best we've seen, and it's definitely worth a look.


There are a lot of different vintage Star Wars displays, but for our money, few are as visually striking as the store display issued for the vintage Kenner lightsaber. The saber featured an inflatable yellow blade and measured 35 inches long. The toy was released in 1978 and also included a repair kit if the blade sprung a leak.

The display itself is very rare though, which makes this recent thread in the Star Wars 12 Backs and Early Vintage Collectors Group all the more impressive. It's always cool to see a collector pick up something that awesome.

The full thread can be found here: Lightsaber display 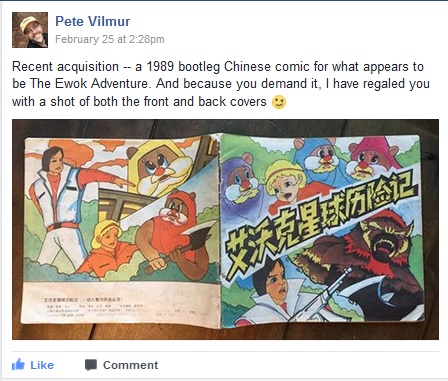 Continuing with our theme of obscure Ewoks items, here's something showcased in the Star Wars: The "Dark Times" Collecting Group that I have never seen before: it's a bootleg Ewok Adventure comic from China. And it is even more awesome than it sounds.

The full thread can be found here: Bootleg Ewoks Comic 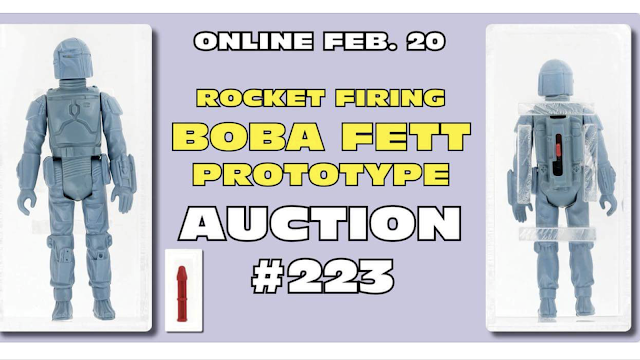 Hake’s Auction House will be offering a prototype L-slot Boba-Fett figure -- the prototype toy that started the hobby of collecting prototype toys! The end price in today’s market is everyone’s guess, and many in the community took great delight in making their estimates on what it will bring.

The rebirth of Star Wars collecting began quietly in the early 1990s.

After Return of the Jedi but before the Prequels, a  small but dedicated group of collectors were still around. The Star Wars Collector was a bimonthly periodical published by lifelong Star Wars Hobbyist Martin Thurn during that era. Martin has recently shared some early back issues in the Star Wars: The "Dark Times" Collecting Group (1985-95). They make a fun and informative read. 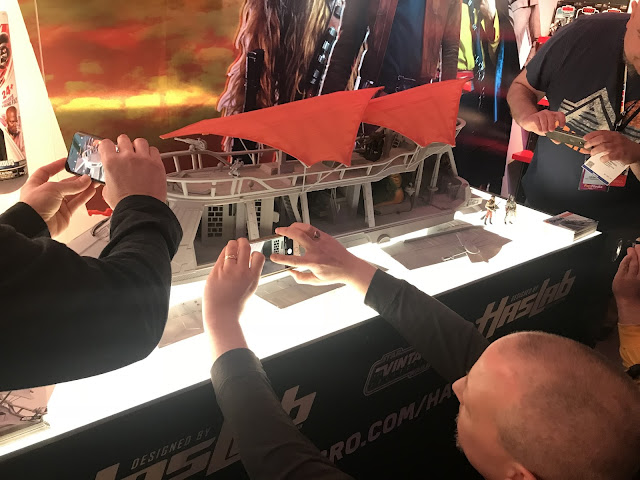 Every year, the soon-to-be-released toys for the upcoming year are premiered at Toy Fair in New York City. This year's releases included a Jabba’s Sail Barge scaled for 3.75 inch figures, which dominated lots of threads across the Star Wars collecting world, in both vintage and modern groups.

Our Star Wars Community Digest Time Capsule Thread for this Issue:
The Other 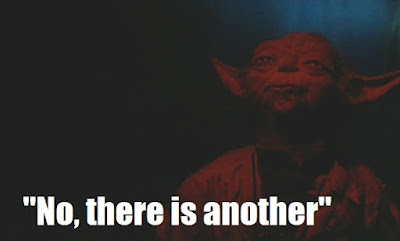 There was a time when Return of the Jedi did not yet exist, and when the community was left with questions about the Original Trilogy which had no answers. And because they were Star Wars fans, they spent months and years endlessly debating each one of those things, in countless online threads and polls. In late 1982, one of the biggest questions fans had was who Yoda's "other" was? Who was he talking about? Another Jedi? Who?  Where? Where they in the movies yet?


Here are some memorable threads on the net.sf-lovers newsgroup, which sought to discover the identity of this mysterious "other." (Try not to spoil it for them.)