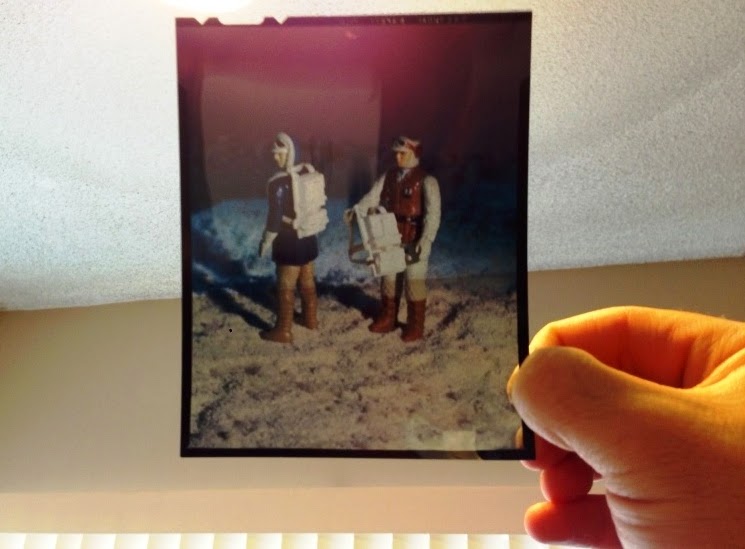 Something that has always enhanced the charm of the vintage Kenner line is the way it was photographed for marketing and promotional purposes. One needs look no further than former Kenner photographer Kim Simmon's website (themanwhoshotlukeskywalker.com) to be reminded of this.

Beyond the toys themselves, collectors have long sought out surviving photographic artifacts depicting them as collectibles in their own right. A number of Kenner-related 35mm slides, transparencies, and even negatives have found their way into collections over the years.


Much like hand-crafted photo art such as that for Romba card front pictured to the left, these "analog" photographic items represent a process that has become obsolete in the digital age and thus retain substantial historical value. Though not nearly as easily manipulated, duplicated, and distributed as born-digital images are these days, images resulting from the traditional photographic process were just as much an integral aspect of marketing products in their time. Star Wars was no different.

The purposes for and content of these photographic items vary considerably. In addition to finalized images used in product packaging and retailer/consumer catalogs, a variety of stages in a product's development or promotion are often captured in these images as well.

For example, a batch of 35mm Toy Fair and other promotional slides turned up in a 1998 Cincinnati collecting endeavor. A number of images depicted in these slides are available for perusal in the Archive's Special Feature Star Wars Does New York: Kenner Toy Fair Showrooms of the '70s and '80s. Some have even led to some pretty remarkable discoveries, such as this image confirming the existence of a previously mythical mock-up 21-back rocket-firing Boba Fett.


Others simply contain publicity or promotional images, such as this example of Han Solo and his chimney-sweeping co-pilot (it can be bit of a pain to photograph these things without a decent light source).


The transparency pictured to the left featuring the Star Wars logo originated from someone who did contract work for Kenner during the early days of the line. Presumably, it was given to him so that he could reproduce the logo should he need it for things he was working on. This piece surfaced on the same buying trip that Ron Salvatore recounts in 'Chive Cast 49. According to Ron, this nifty piece was purchased at a "Bob Evans or some other breakfast joint" just before the long drive home.


A significant number of slides, transparencies, and prints also came to market in the early 2000s through Cloud City Collectibles. I distinctly remember spending hours looking through these pages when they were still up. Many of the images can still be seen and purchased in reproduction form at Kim Simmons' website linked above.


Negatives, transparencies, and prints such as these for the Stormtrooper and Rebel Soldier provide collectors an opportunity to have a nice representation of the original imagery used for figure cardbacks. 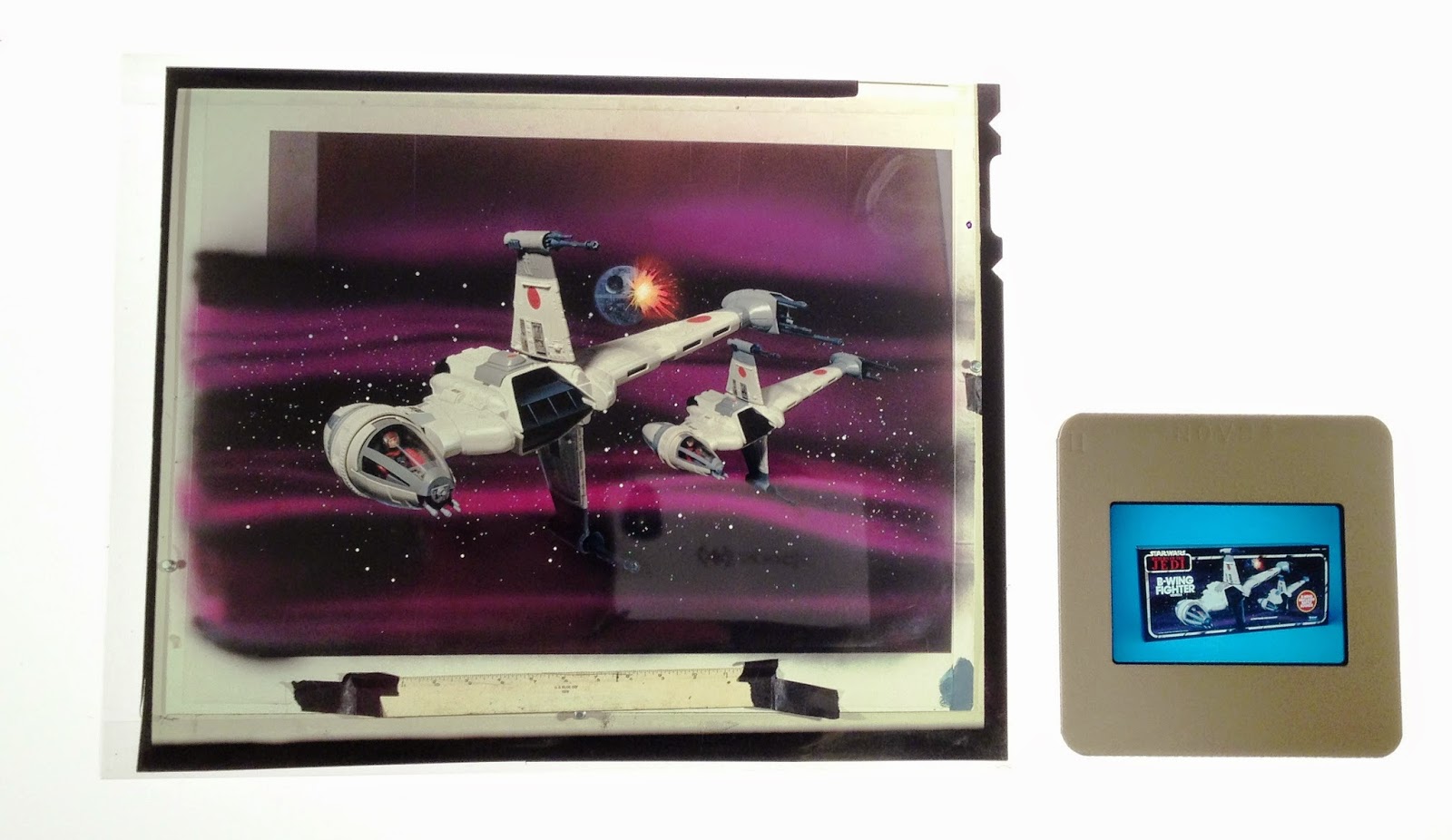 Photographic items also offer decent avenues for focus collectors to expand a run on a particular item. Over time, I've been fortunate enough to have picked up a few pieces pertaining to the B-Wing Pilot's forgettable ride. Most are pretty straightforward, such as the 4x5 transparency of the Kenner box artwork (which interestingly includes a ruler for scale) and 35mm slide featuring the finished product.


These 35mm slides, on the other hand, are a bit obscure. I purchased them at Celebration V in Orlando from none other than the capped gentleman in the earlier depicted 1998 hotel photograph  -- for all I know, they likely came from that same find!

From what I recall from a conversation with Todd when I first acquired them, these images may have been taken at a focus group session of some kind. They also could have been taken as potential publicity shots for use in press kits and other such material, or for internal presentations at Kenner. It's difficult to say. Nevertheless, this kid appears to be getting way fun more out of that B-Wing than the TIE Interceptor, but this may only be due to the fact that he can't quite figure out how to conveniently set the cumbersome thing down.

Beyond being somewhat of a hassle to properly photograph, these types of items can also be difficult to display while balancing preservation needs. Photographic materials are quite sensitive to temperature, moisture, and light. Prolonged exposure to heat and high humidity can facilitate harmful chemical reactions resulting in faded or discolored images. Ongoing exposure to light (particularly ultraviolet light from the sun or fluorescent/incandescent lighting) can also lead to similar irreversible damage and should be minimized, if not avoided entirely. LED lighting can act as a serviceable compromise if utilized in moderation.

Whether displayed or stored, photographic items should be enclosed in some form of non-reactive protective material. Plastic enclosures should be made of uncoated polyester (Mylar), polypropylene, or polyethylene. Quality archival products can be found from vendors such as PrintFile or the previously mentioned Bags Unlimited.

So long as items are protected with a sleeve of some sort, they can be displayed quite nicely in inexpensive products available at office supply or craft stores. The 35mm slide featuring the artwork for the AT-AT packaging and the transparency of the Droids ATL Interceptor pictured below are protected in Mylar sleeves and displayed in acrylic frames purchased at Rite Aid for $2 a piece.

This 4x5 B-Wing transparency is similarly stored in a protective sleeve and encased in a reasonably priced acrylic photograph display I bought at a Michael's craft store some years back. 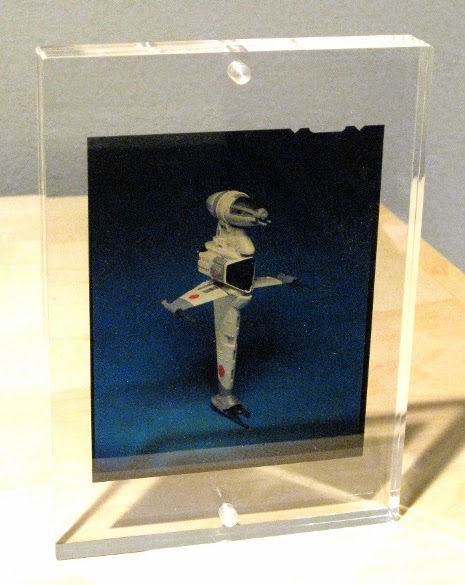 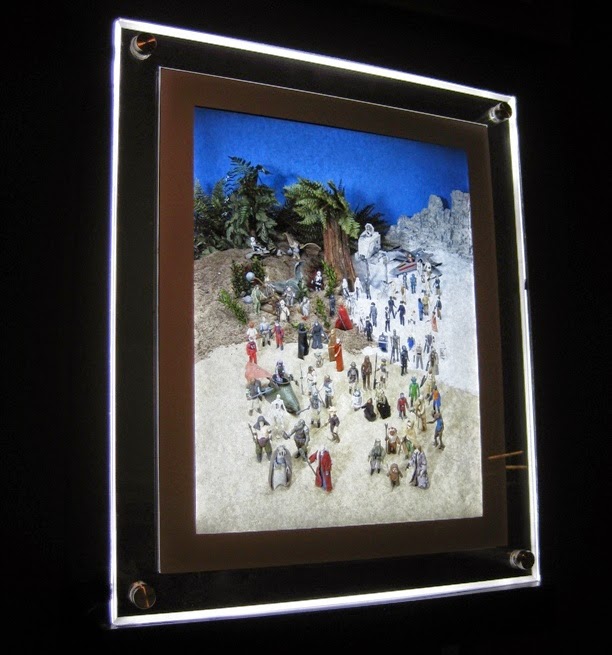 For something a little more ambitious (and costly), one can display transparencies in acrylic frames with LED back-lighting such as this 8x10 image from the back of the "Star Wars Is Forever" mail-away poster described in greater detail here. While the particular vendor I ordered this one from no longer seems to exist, similar products can be ordered from Displays2Go. One thing to note -- a sheet of white acid-free paper as a backdrop was needed to really make the image "pop."

As an aside, I've always thought this image evokes the stereotypical scene from a 1960s beach party film, only populated by a bunch of funky delinquent Star Wars characters dancing incessantly to some Dick Dale tunes. Alas, that may be best addressed and/or expanded upon in another post someday.

Posted by Stephen Danley at 8:45 AM