Connecting Before the Internet

This RebelScum post, by darthalvin, and Tommy's recent post on collecting forum history reminded me of TKRP.

Are readers aware of TKRP? The acronym stood for "Tom Kennedy Radio Productions." The company was an early hub of Star Wars-related merchandising and communication.

I'll probably do a few posts on TKRP. Today I want to focus on their "Collector's Connection" publication, which to my mind is about the most interesting thing they put out.

Started in 1983, just as the hubbub over Return of the Jedi was starting to wear down, it was basically a big list of classified ads maintained for the benefit of Star Wars collectors. Serious collectors could purchase an ad, list their haves and wants, and make connections with other collectors around the country -- even some outside the country. (Japanese collector Eimei Takeda was among the advertisers.)

As such, the publications are a treasure trove of interesting collecting history. Let's take a look at some related ephemera. 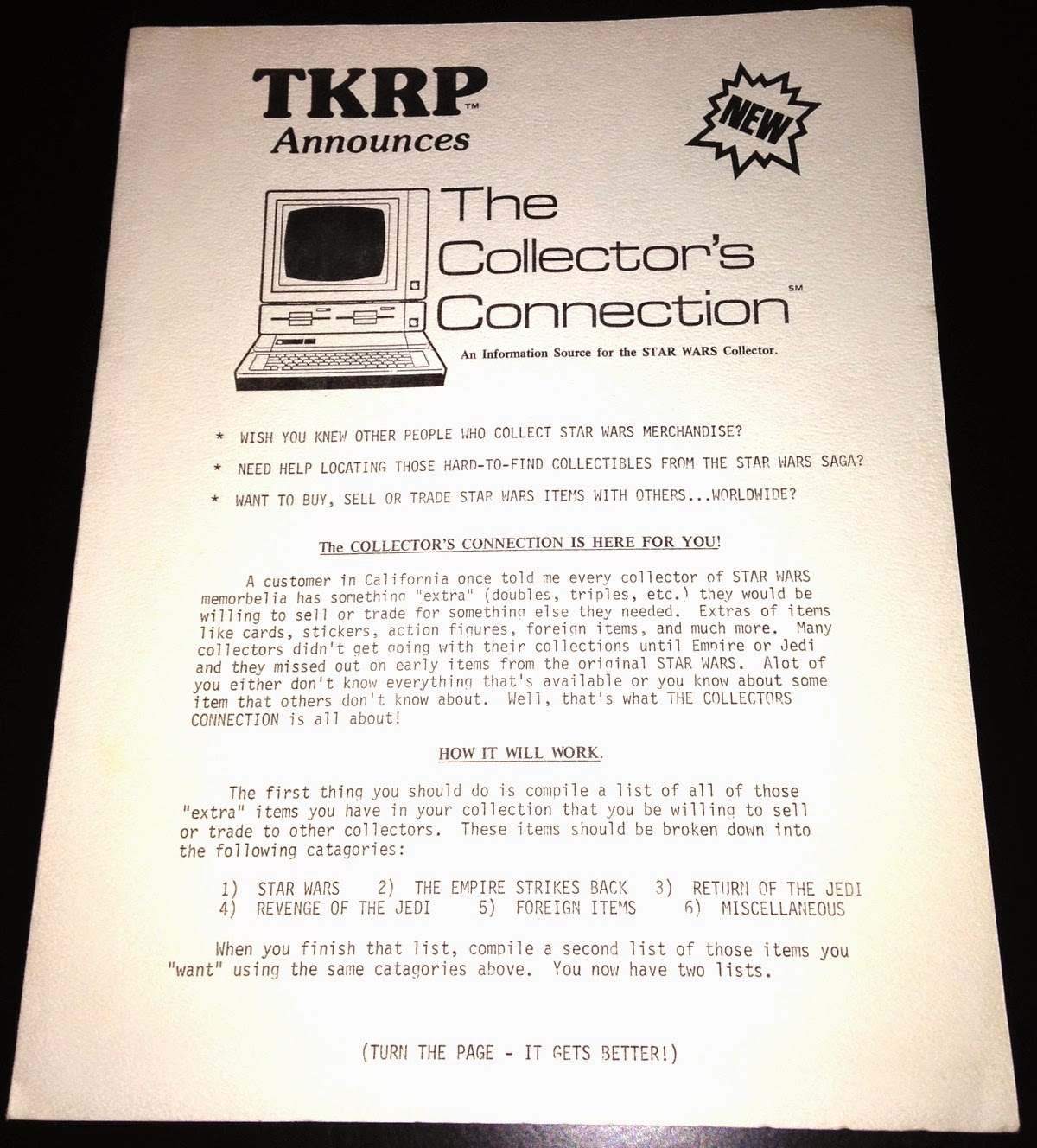 Above you see the original announcement/advertisement for the service. It speaks for itself. 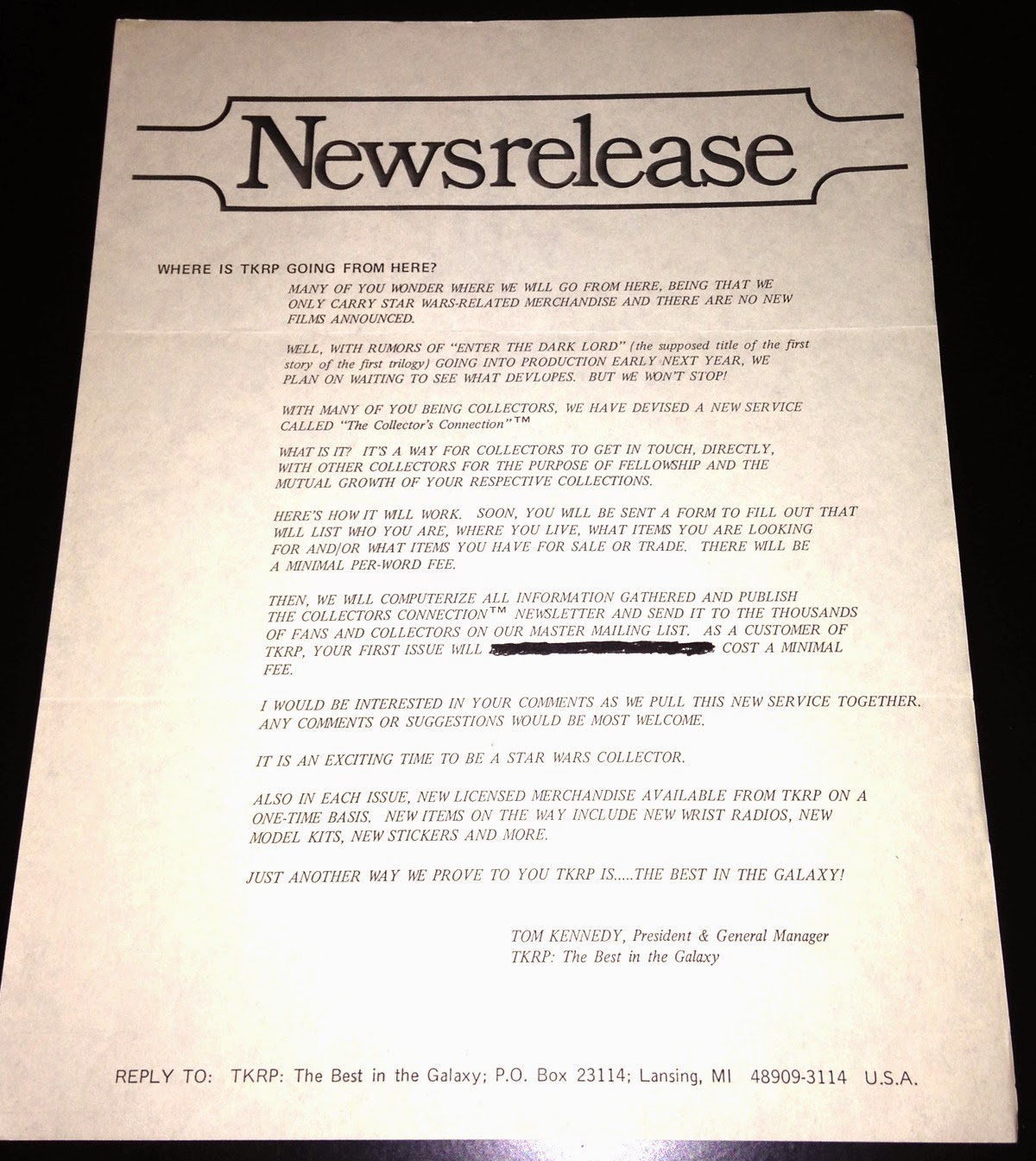 Here's another announcement. The fun thing about this one is that it references a rumored prequel film called Enter the Dark Lord. Either that rumor never came to pass or I've completely missed out on a fairly significant piece of the Star Wars puzzle!

I think it's pretty evident looking at this ad that at this stage Kennedy wasn't entirely sure where to take his enterprise now that the Star Wars phenomenon had wound down and the flow of licensed merchandise had slowed to a trickle. 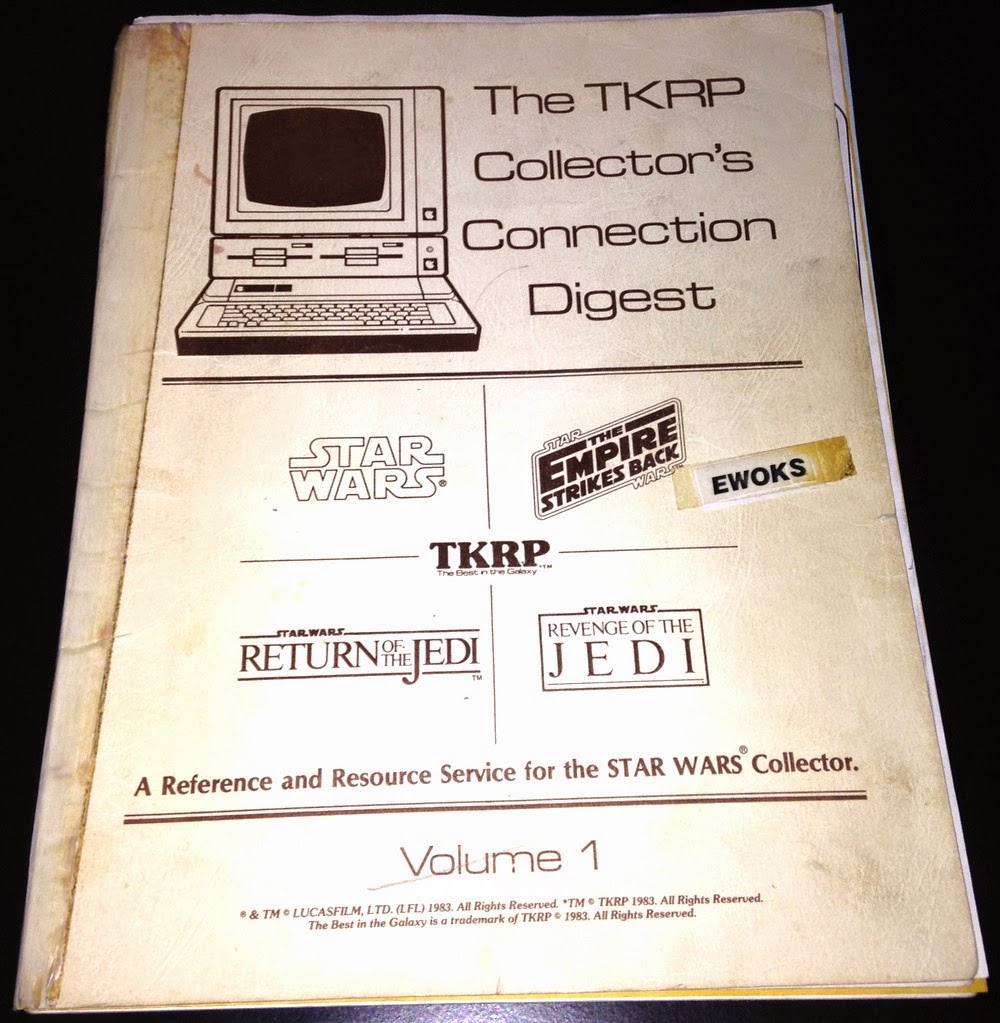 The cover for the first issue featured the logos of each film plus that of Revenge of the Jedi. The guy from whom I acquired it taped "EWOKS" on there. I have no idea why. 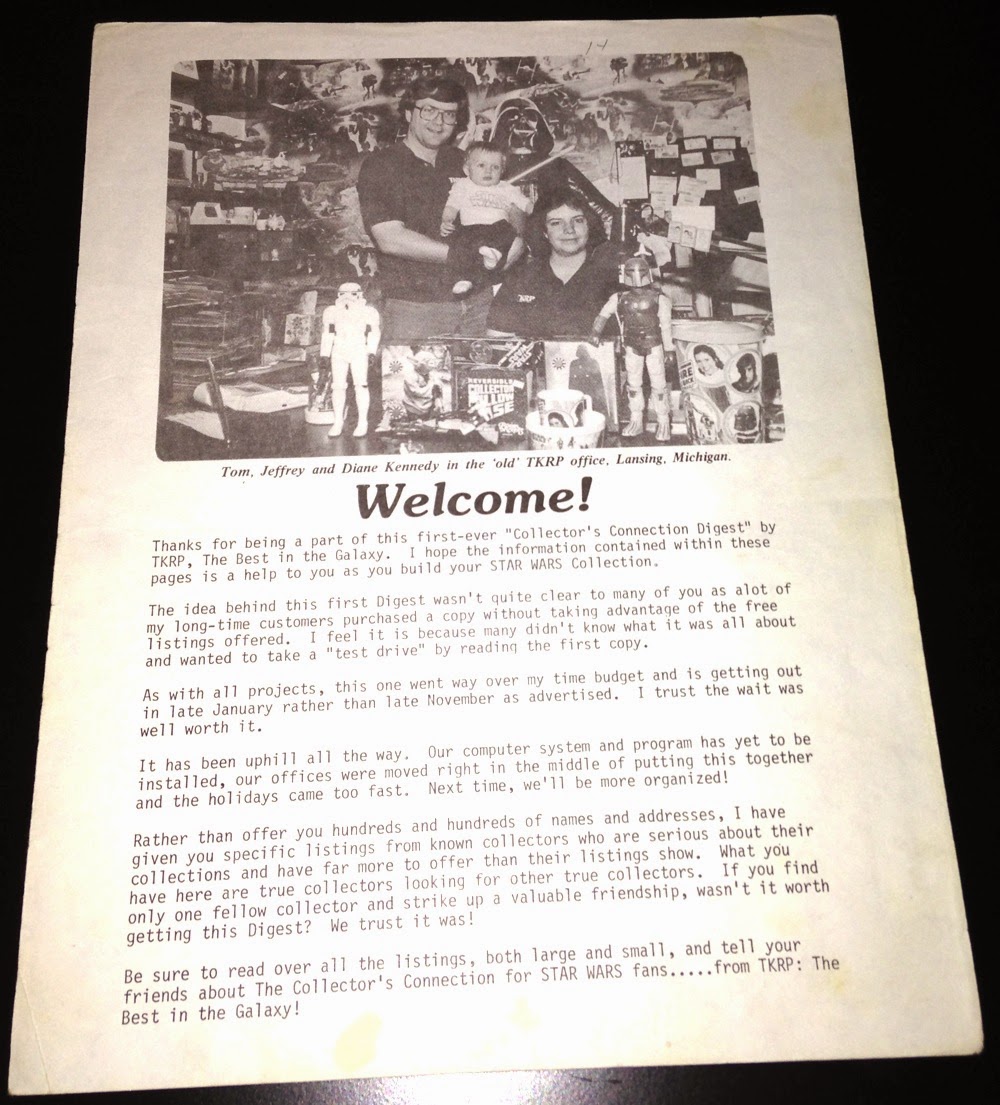 The issue featured a welcome message from Tom Kennedy, which included some notes regarding a publication delay and assorted other difficulties. That's Kennedy and his family in the image. 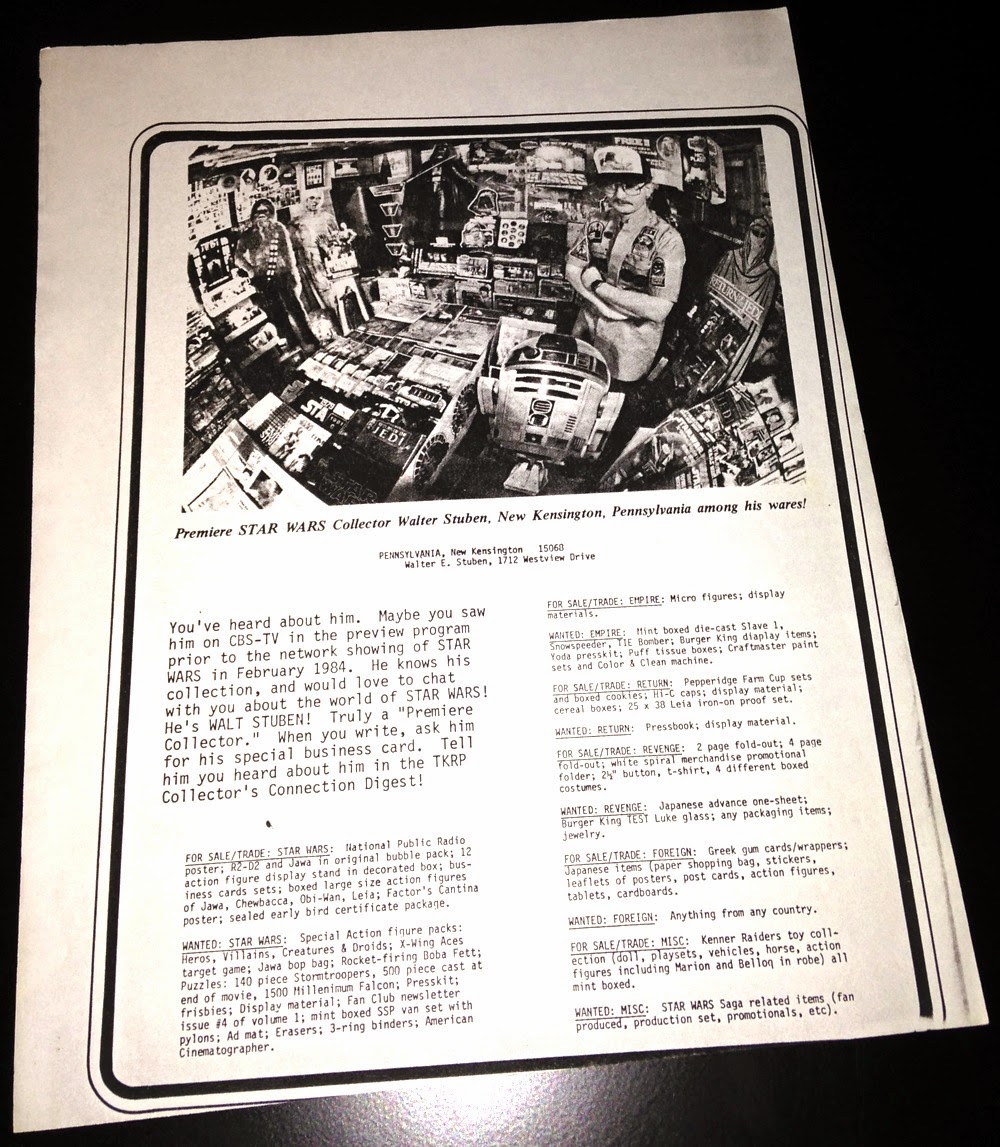 The biggest collector around in those days was Walter Stuben. His ad is particularly ostentatious. This is a xeroxed copy of the spot that was inserted into the publication, like a flyer. Judging by the reference to 1984, I think it's a later version. But all his ads were pretty similar, even if the lists of items changed a bit.

One interesting thing: he's looking for a "Rocket-Firing Boba Fett." Did he believe some had been released? Or had he caught wind that some prototypes existed in the hands of Kenner employees? Stuben had had some interaction with Kenner, so the latter scenario is a possibility. 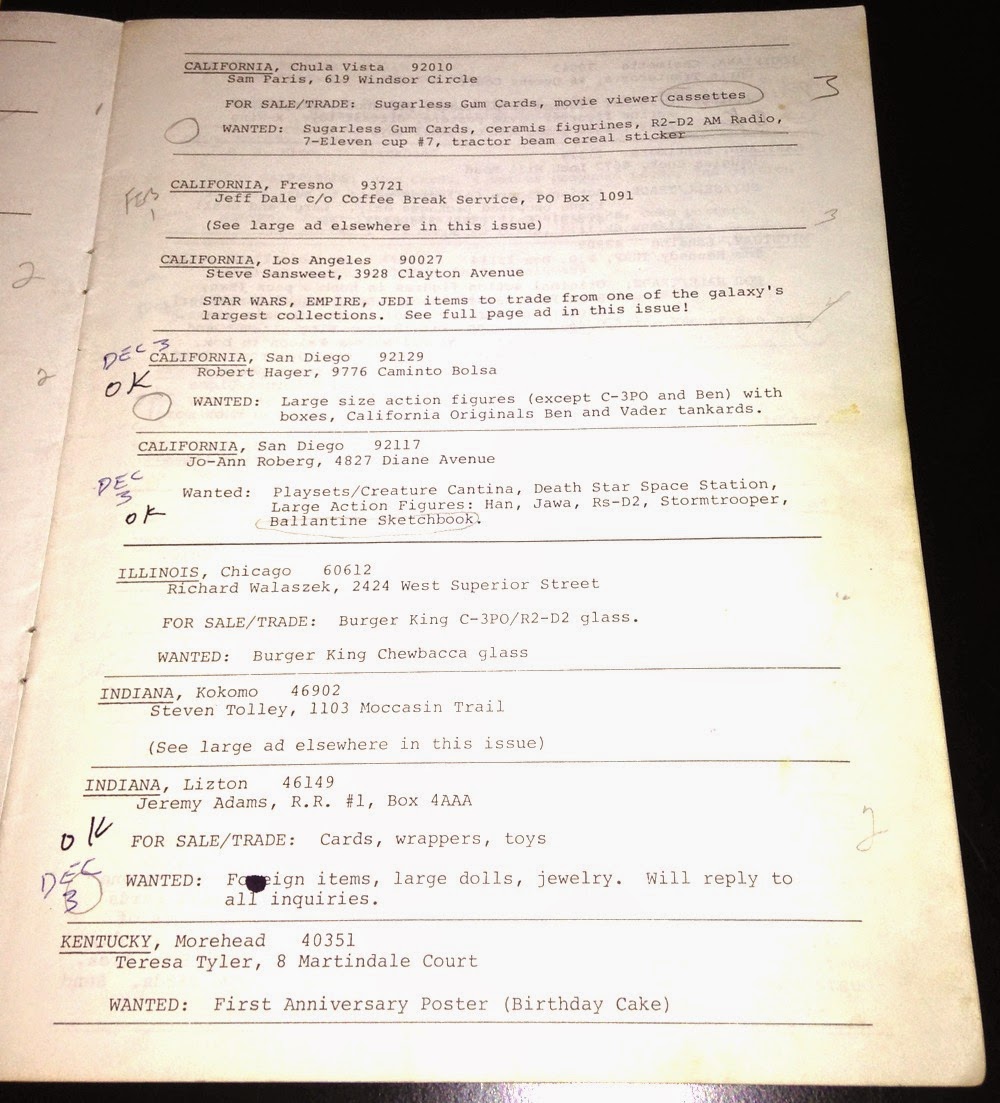 A typical page of classifieds, including one belonging to some guy named Sansweet. Those markings in the margin are notes related to deals between the source of the pamphlet and the authors of the adjacent ads. 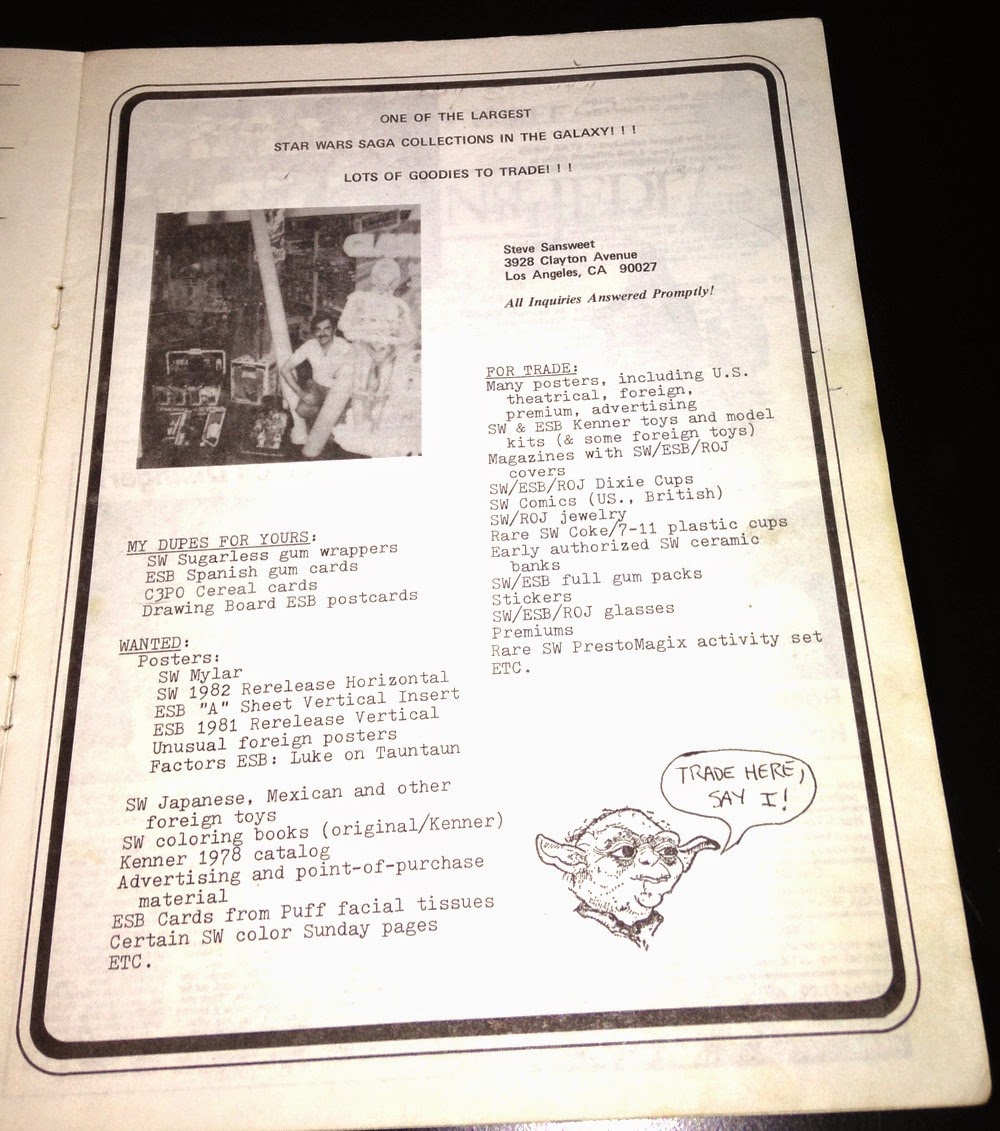 Here's the large ad that Steve references in his classified.

Hey, if you have some extra coloring books you should drop him a line and see if he still wants to trade! 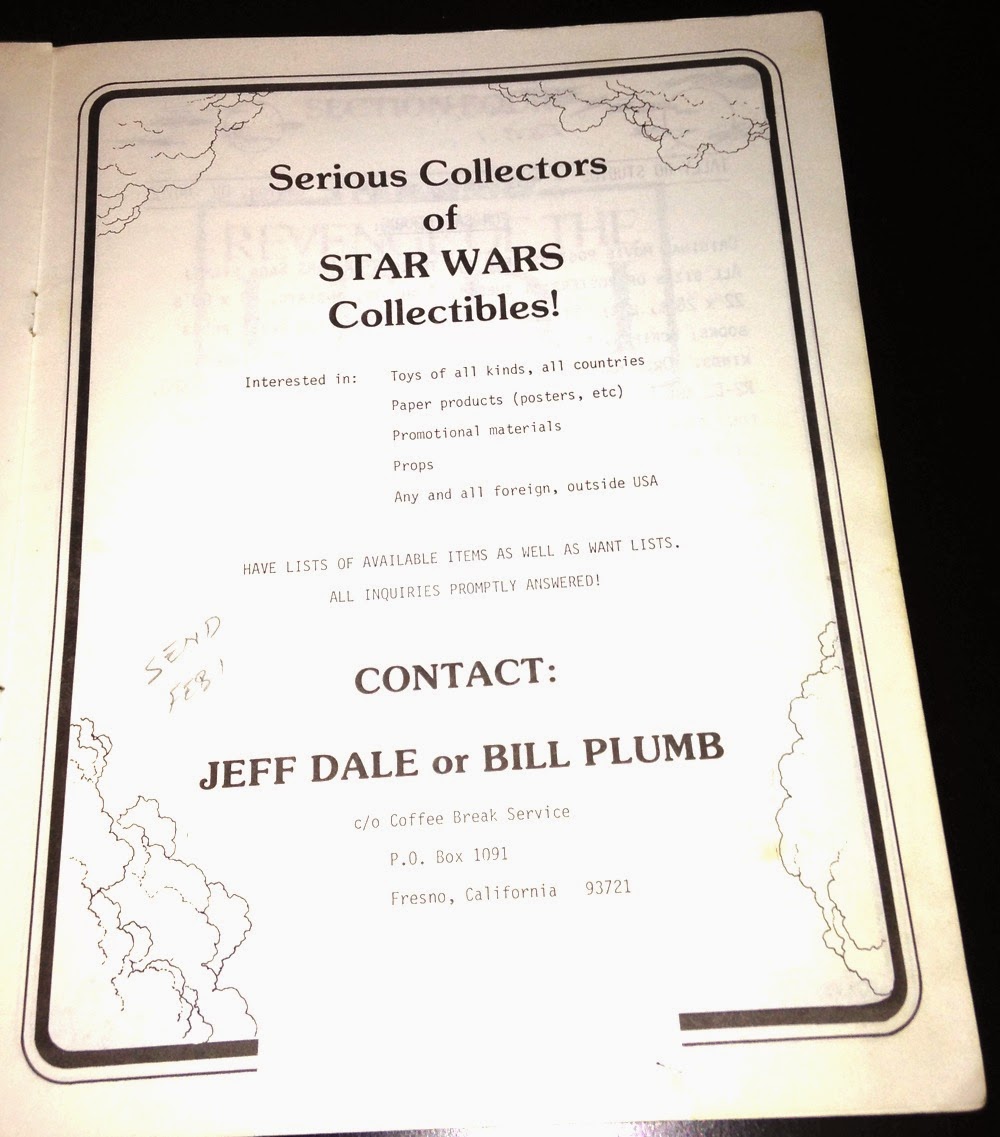 Another full-page ad. Bill Plumb became one of the preeminent collectors of Star Wars artwork. 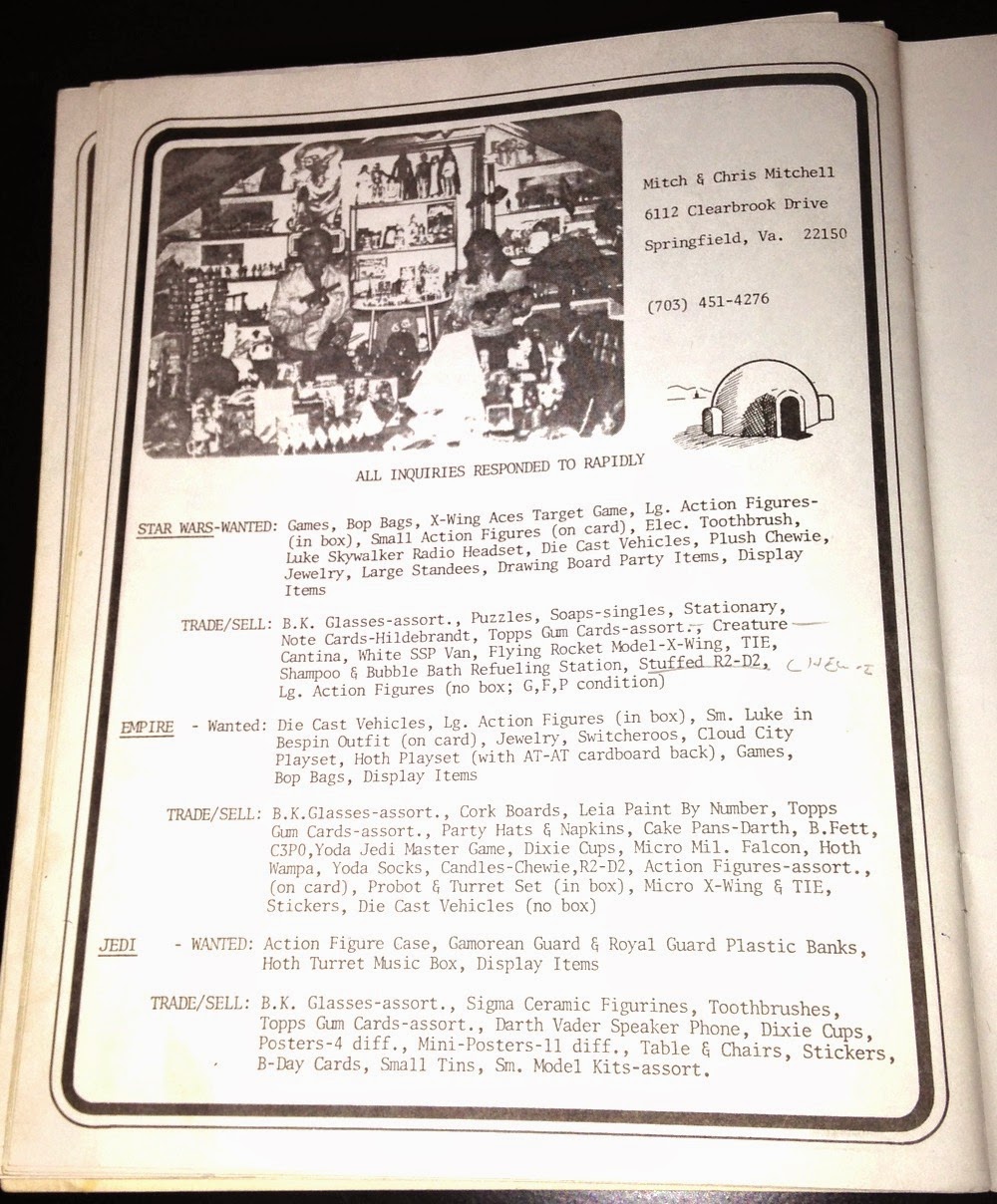 This ad is from the second edition of "Collector's Connection." Husband-and-wife team Mitch and Chris Mitchell were among the biggest collectors around at the time. They were out of it by the early '90s. I think you can be pretty sure that some of their collection now resides at Rancho Obi-Wan.

For me, the publication is fun in part because it's filled with the names of collectors who were long-timers by the time I got into the hobby around 1993. Some of them I later met in person; others I know only through stories. 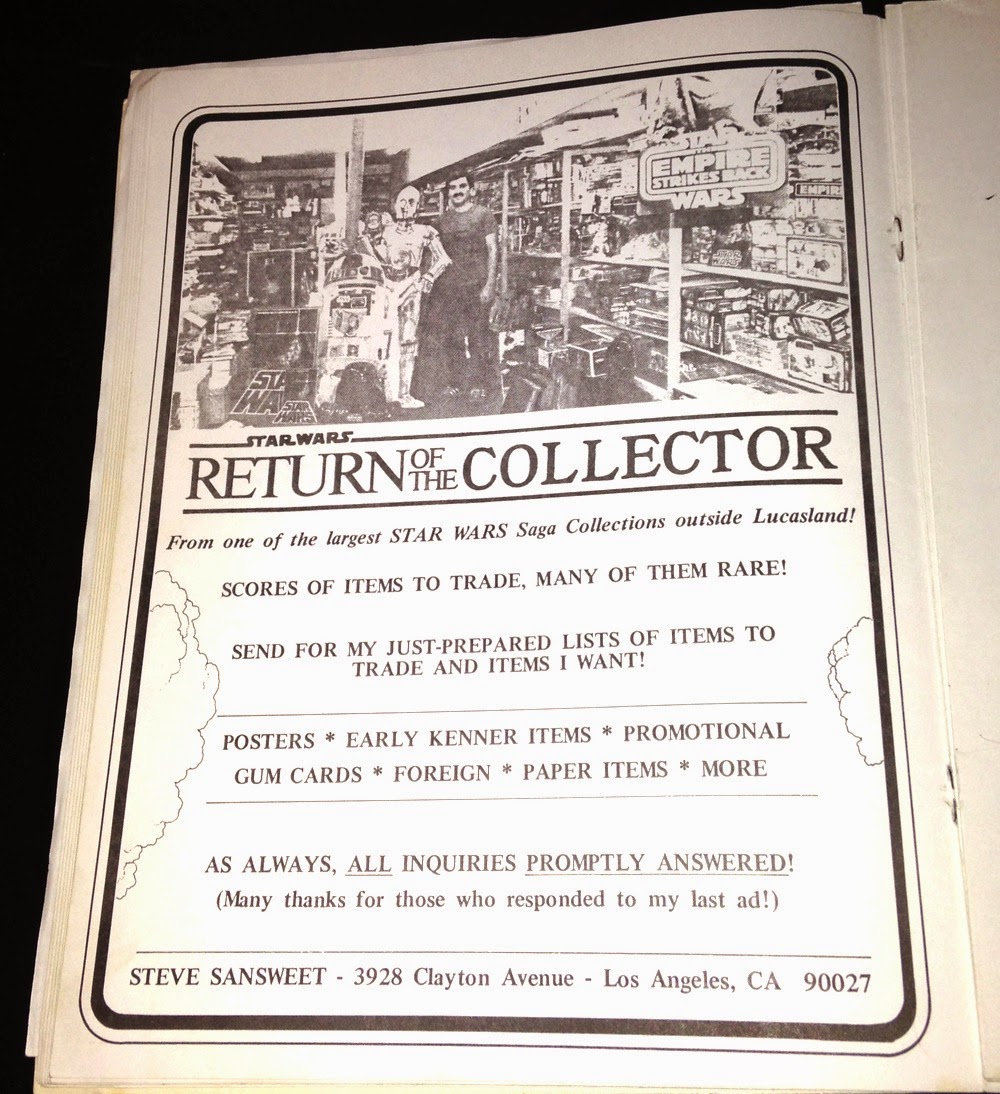 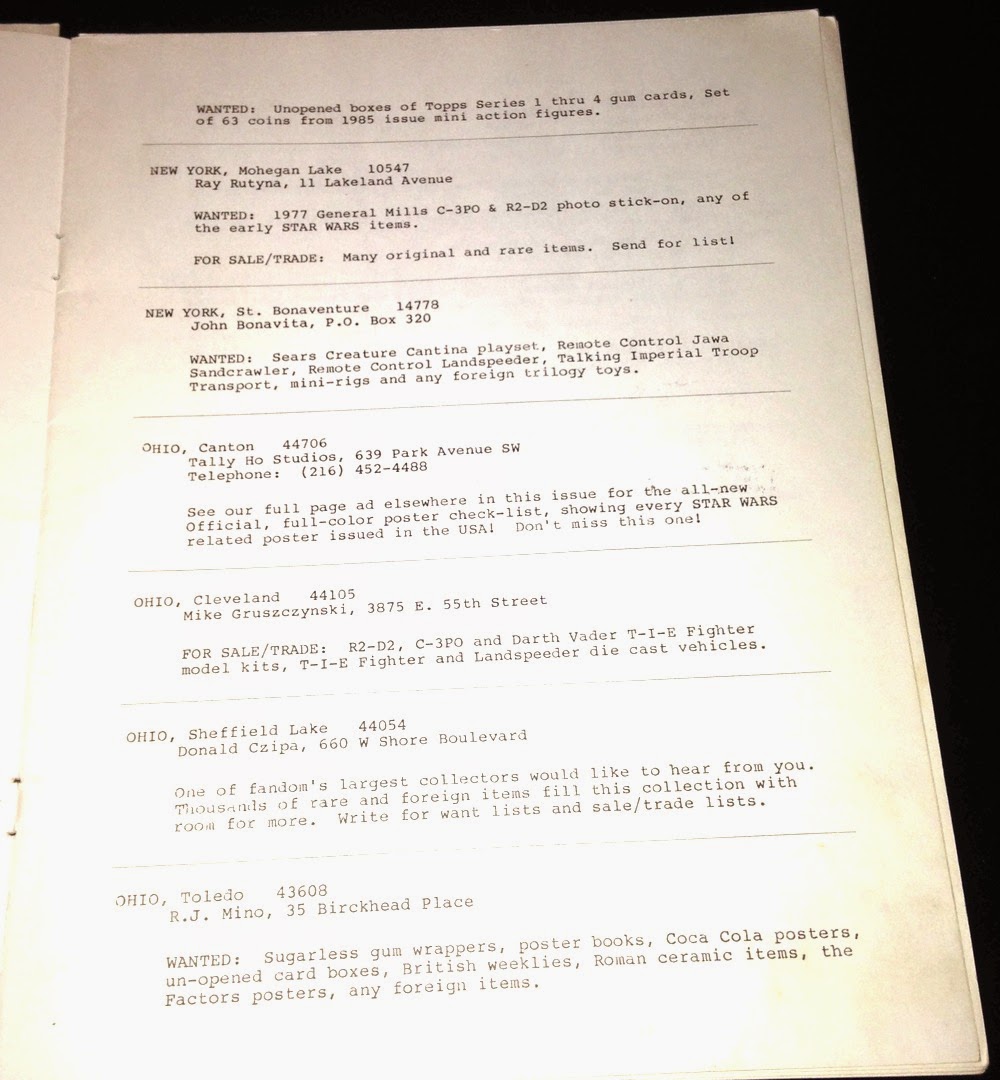 Finally, here's another look at the classifieds content. Lots of familiar names here . . .

When I got this material from a long-time collector he told me all about writing the folks in these classifieds, trading dupe lists, etc. Most of this he did via the postal service -- and he had stacks of old correspondence to prove it. I tried to convince him to sell me the old letters, but he said they were too personal. Too bad. It would have been fascinating to look through them.

In a way, the SWCA is part of this narrative: It was intended to allow collectors to share their collections with colleagues the world over, without the cost and wait time associated with travel and snail-mail.

As you cruise through eBay listings and peruse far-flung collections with the click of a mouse button, don't forget to reflect on how fortunate you are to be living in what I like to think of as THE WORLD OF TOMORROW.
Posted by Ron at 11:30 AM