The Rise and Fall of 'Fall of the Republic'

With all the Episode VII "leaks" hitting the internet over the last few weeks and months, I've been thinking back on what was supposed to be the original internet leak. But then wasn't.

By the late 80s/early 90s, Star Wars fans were eager for anything which would give them something new. Star Tours was open by that point and the Zahn trilogy was still years off. There was no news from LFL on the release dates for new films and no one really liked The Ewok Adventure. With the exception of a few foreign markets, Star Wars had all but disappeared from the public consciousness. It seemed to be a fad which had all but died out. It was a dark time for the fandom.

Something had to be done. 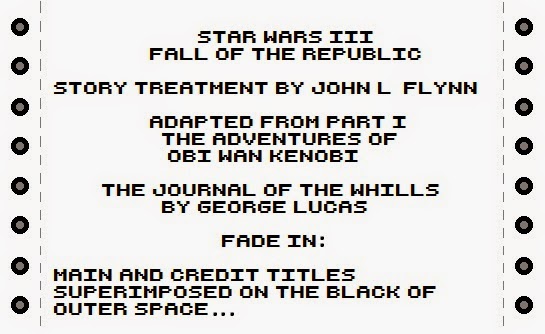 Around this same time, a document hit what was then the earliest days of the internet, as if delivered from the heavens just when it was needed the most. It had begun its life on the sci-fi convention circuit, somewhere between 1979 and 1983, but by the late 80s it had become an internet phenomena. The document had no real source or origin attached to it, but it was reported to be the original draft for what would be the filming script of Episode III. Except that it was very, very short. And was written by someone other than Lucas. And not particularly good. And was apparently for Episode III rather than Episode I. Calling itself "Fall of the Republic," this strange story was all the rage in fan circles in the 80s and early 90s though. Even into the mid-90s, fans and collectors still knew of the story. They might never have read it, but they still knew that it existed and it formed the basis of many different theories on the film's mythology, even if many doubted its authenticity by that point.

As it turned out, Fall of the Republic was not a draft of Episode III. It was just something that someone wrote, which was either accidentally or deliberately presented as genuine by the internet in the first of what would be many Star Wars hoaxes. While it does have several similarities, Lucas took his prequel in another direction and Fall of the Republic was consigned to the ashcan of history. Still, there are those who remember the days when it was the latest news "leaked" from the set of a Star Wars film which the fandom was dying to see. And if nothing else, it's probably the first and best known Star Wars fan fiction around.

I have preserved the earliest draft of the story I can find on the SWCA:HHA, so that a new generation of fans can read the leak that never was...

Fall of the Republic