As we approach the harsh middle of Winter things are staying hot here on the General MarketWatch update. Deep in the confines of our Sandcrawler we’re trying to avoid the harsh weather that is being seen across the globe, giving us more time to bring to you some of the coolest items to hit eBay in the last month. This month we feature several items that are sure to make your jaw drop, mouths water and eyes pop from your head. With the holidays over we enter into the Winter high point for the market as collectors look more to their collections vs. giving gifts to others. Thus we always see a little bit of an influx in the market which yields some great items keeping the market hot during this cold time of year. With the New Year upon us we are posed to see a great 12 month cycle for our hobby. Why you may ask, well let’s do a quick review of some of the current things affecting the Vintage Star Wars market:

All these things combine to create a very strong petri dish for the market to flourish. In fact, if you’re on the fence about selling, it might be a great time to dump some extra pieces on the market this year. Top dollar is being paid and given the factors I mentioned above it will probably stay that way for the short-term and more than likely the long-term.

Any-who, onto the MarketWatch General update. We have 7 auctions to talk about this month, some random, some rare, all cool in their own way.   Let’s take a Luke at what we have, I mean a “look” at what we have, well let’s just start by looking at Luke.

Okay people, we have the mother of all proof cards this month. It’s hard to say that one image from the Vintage line is more synonymous with the hobby then any other, as all have a special connection with the collecting community, and those that experienced this line at large. However I’m going out on a limb and say the Luke Skywalker original artwork for the 12 back could be that one image that is more recognizable to anyone then any other image from the line. Carried across all three movies it had a lot of impressions with the youth of that generation as it was on store shelves for nearly 7 years. In the end when you look back at the time, Luke was the key star of the movies, he was the hero in a time before anti-heroes became the real heroes of the movie. So when the proof card for the 12A Luke Skywalker comes on the market, everyone should take notice as this truly is a rarity to see surface in a day and age when there is such minimal trading of 12 back proofs.

How rare you might ask, well it might surprise you that 4 of these have been graded to date, with a total of 6 other characters having 12 Back A proofs graded as well. So although this isn’t one of kind it’s truly in the minority of proof cards when you think there’s 2500+ Revenge proofs and over 1500+ Empire Proofs out in the market.

Given the iconic aspects of this piece it’s easy to see why a large price-tag would be attached to the item.    And unlike most items on the MarketWatch this went into the high atmosphere garnering a 5-digit price of just over $10,000. As Michael Fassbender once said, "I don’t know Karate, but I know Karazee"…and although this isn’t really that crazy given the context of the piece, it’s still the price of car for a piece of cardboard and that boggles the mind of 99% of the population. 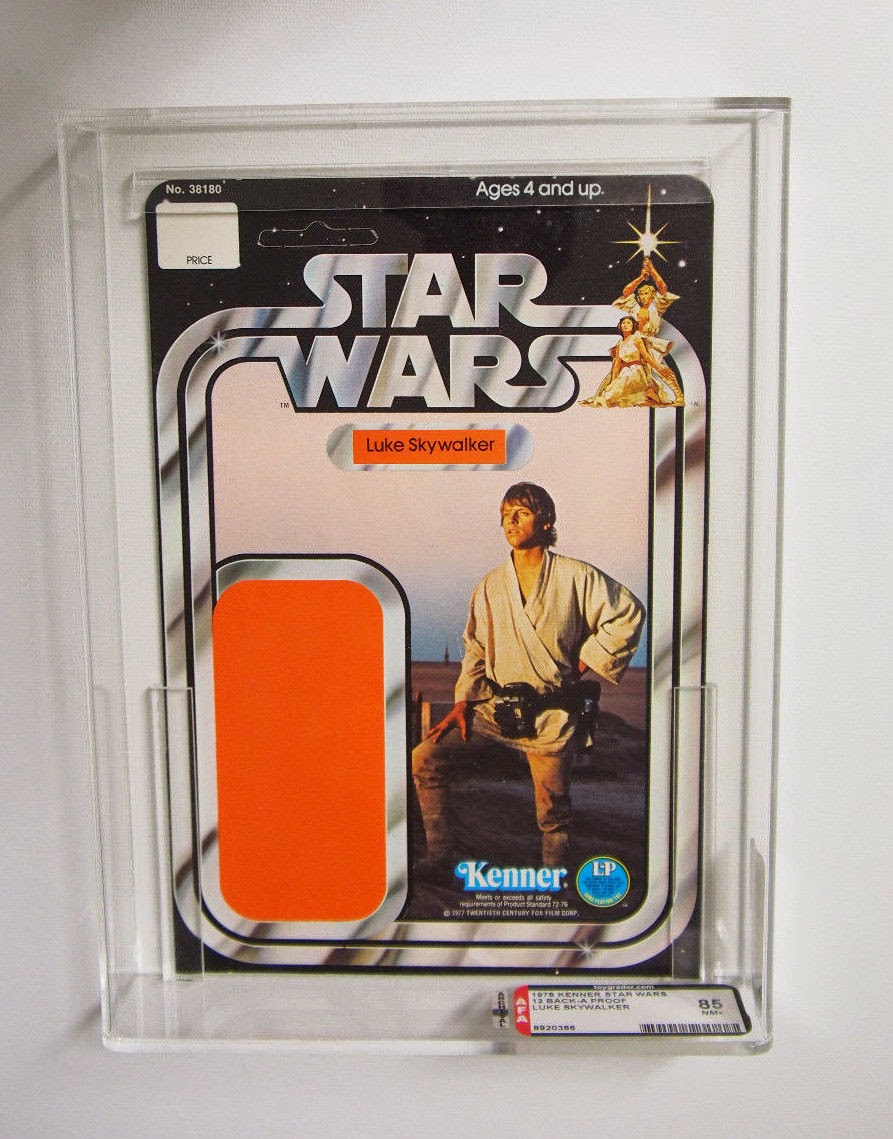 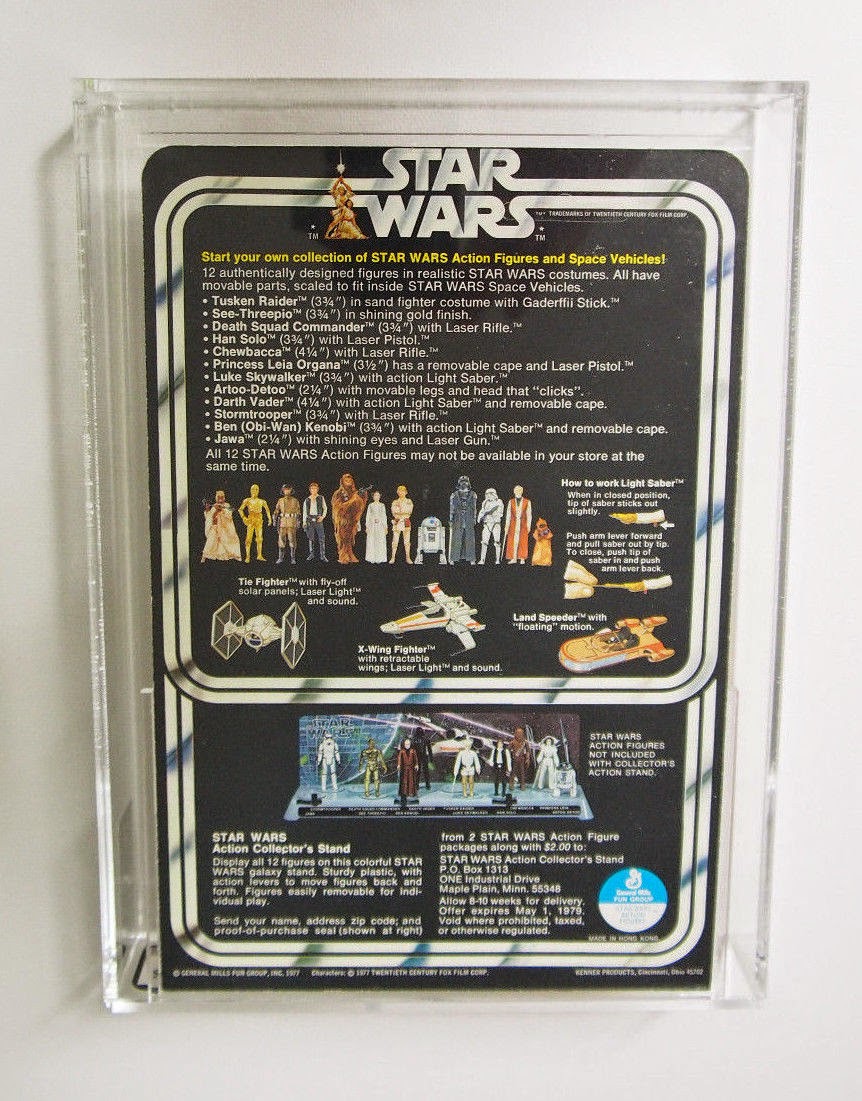 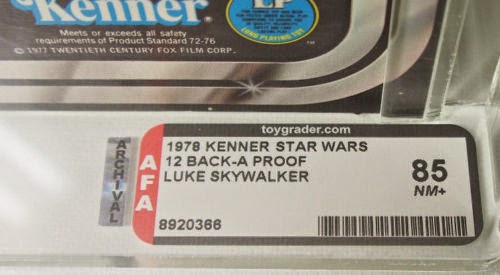 First off we have a grouping of boxed vehicles from the line. All of which are sealed and graded by AFA. I’ve always been fond of this line as some of the artwork is really detailed and reminiscent of some of the unused concepts for the POTF line as well as the production pieces from that line and the Droids series. Glasslite vehicles command a premium on their own but having three vehicles is quite a sight. 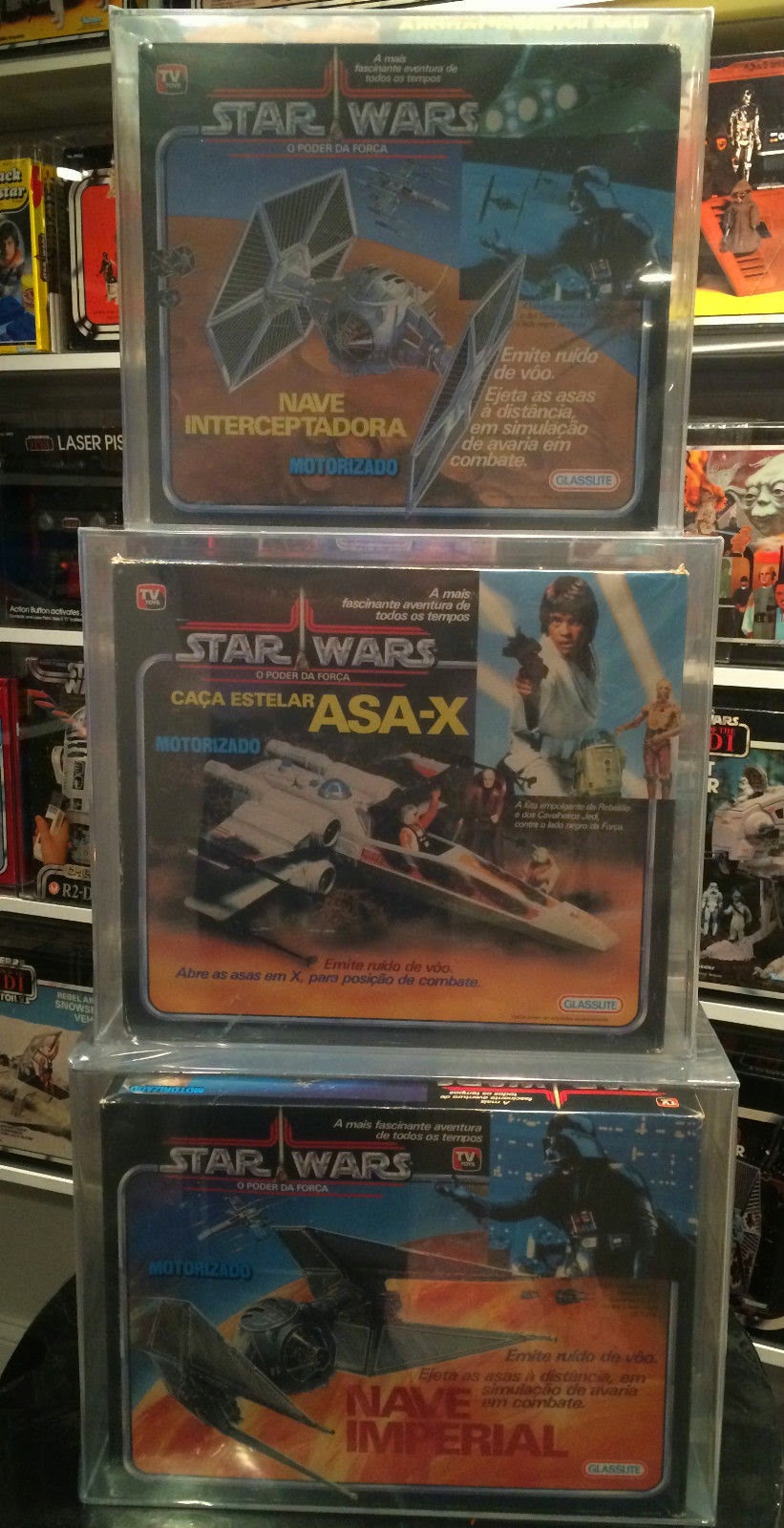 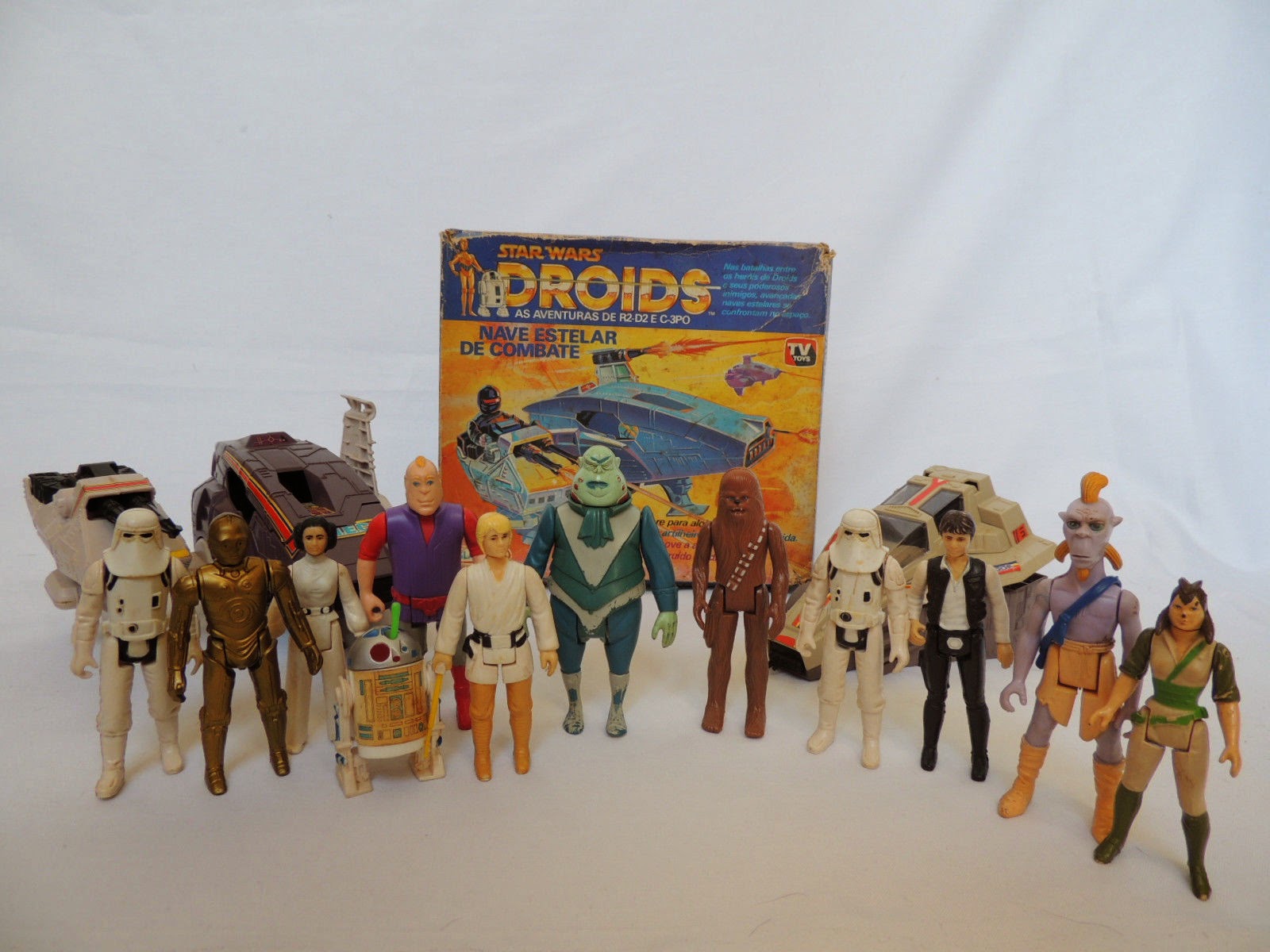 Keeping with the foreign theme we have a great example of an R2-D2 on a Meccano square cardback.   The Meccano line is a favorite of many long time collectors as well as those new to the game. The cardbacks are very vivid and feature unique takes on artwork as well as aesthetics given the unique shape of the cardbacks. This piece was particularly pricey even for a Meccano figure as similar items have gone for substantially less in the last year, but if you’re in the market for a piece like this you better jump on it while you can, as there are only a handful out there. 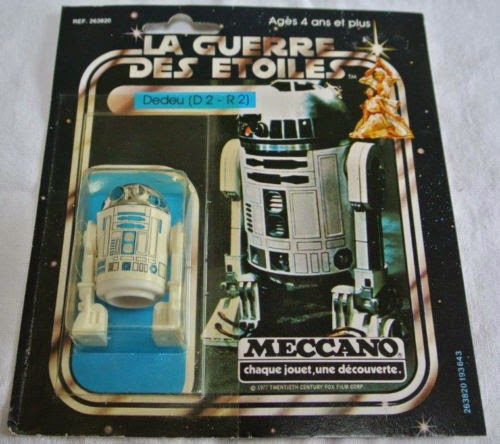 With November focus on the 'Chive Cast we saw a lot of time spent on the Armored Dog Driver known as the AT-AT Driver. One particular piece that "Brisbane Brisbane" Mike was able to find was the POTF MOC figure of the AT-AT Driver -- quite a rare piece. Then with our Gifts Under a $1,000 update from December we saw a steal of a deal on a Gamorrean Guard, the 2nd of the 3 extremely rare ROTJ figures to be found on POTF cardbacks. This month we follow suit with another of the super rare POTF figures -- Nikto. Like the POTF AT-AT Driver, Nikto went for big bucks, and was fairly in line with other examples that have come up on the market in the past few years. These continue to appreciate in value and are key items for POTF focus collectors and those just looking for something rare from the production run. 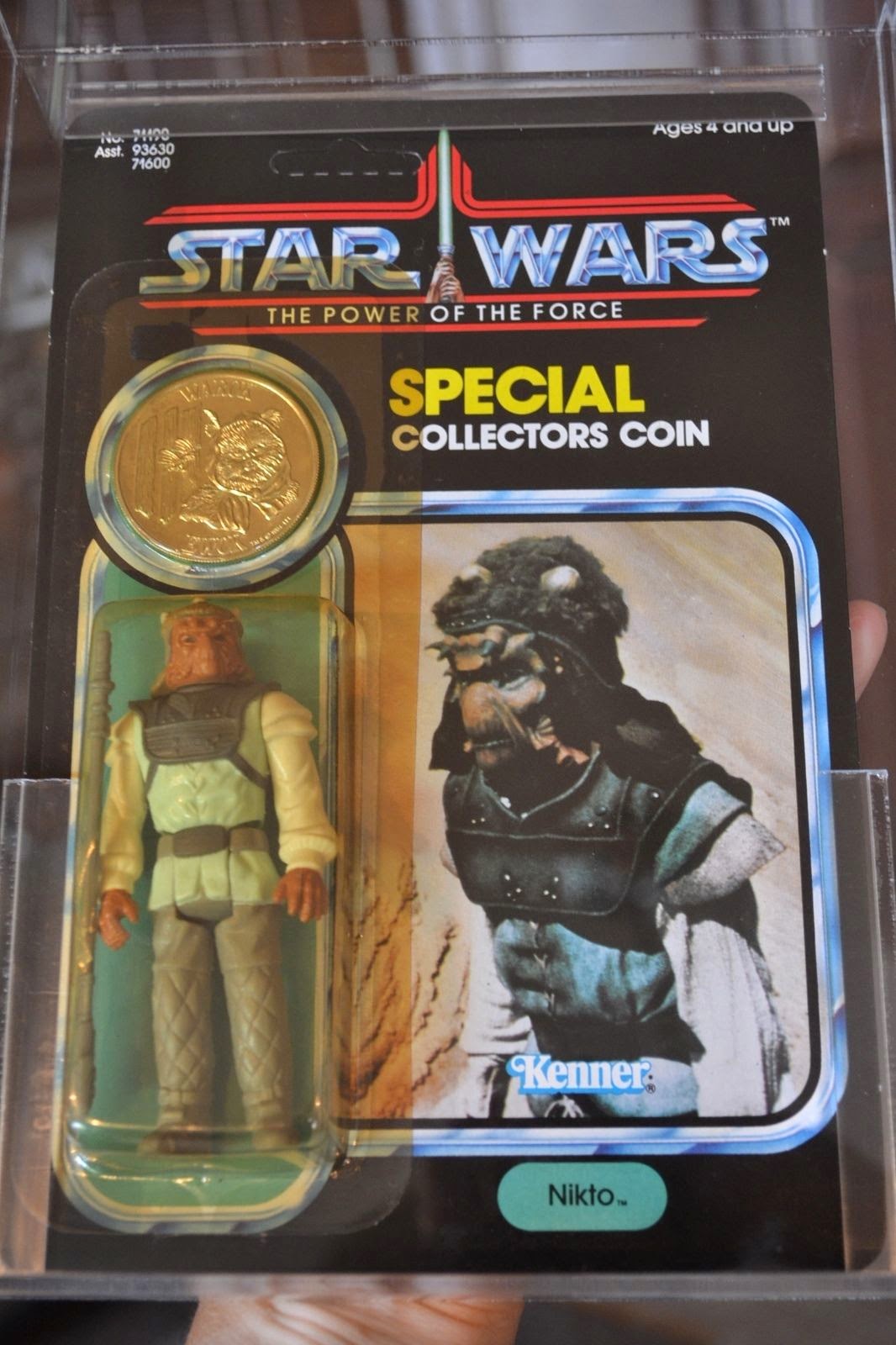 At one point in time we said we would never cover these pieces Well call me a liar but when I saw an Early Bird set come up and sell for $5K+ my interest was piqued. Here we have a great example of a graded set of the figures. I always say AFA is for those that want it and it doesn’t always make sense, but with mailers I’m 100% convinced that AFA enhances the visibility and appearance of any set. In the case of the Early Bird set it’s even more enhanced given the number of pieces involved. 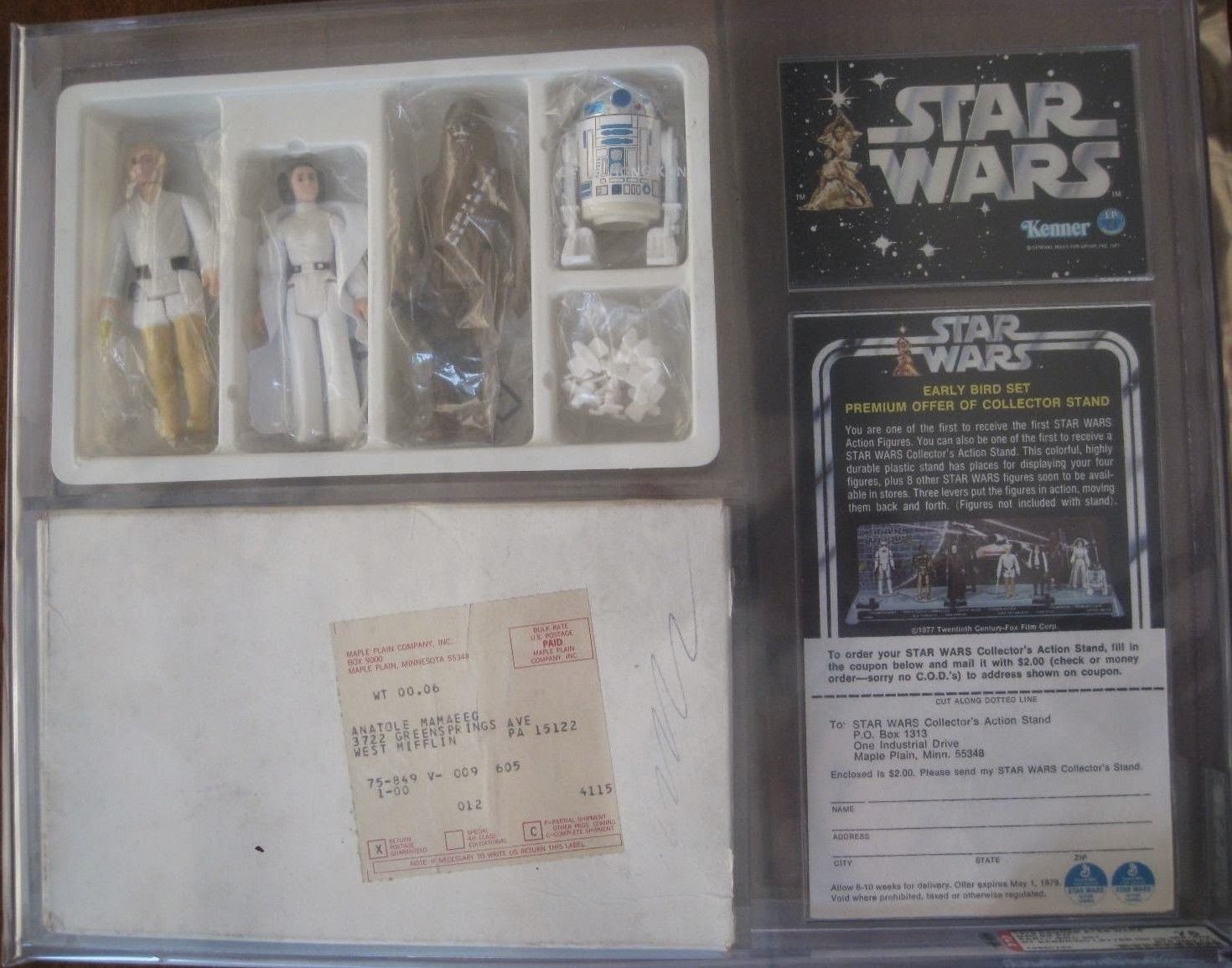 Rounding out our coverage for this month is a line that we started off with last month that's always a hot topic: the Uzay line. Instead of having figures this month we have one of hte very rare mini-rigs that is MIB. Much like their brethren in the MOC line, the boxed Uzay items have their own campy and outdated charm. They don’t feature HP calculators, and use similar imagery to the domestic production line. However they aesthetically are a mess. With print quality that looks like it was done on someone’s Commodore 64, they have a unique type of charm, and are truly in a class of their own. 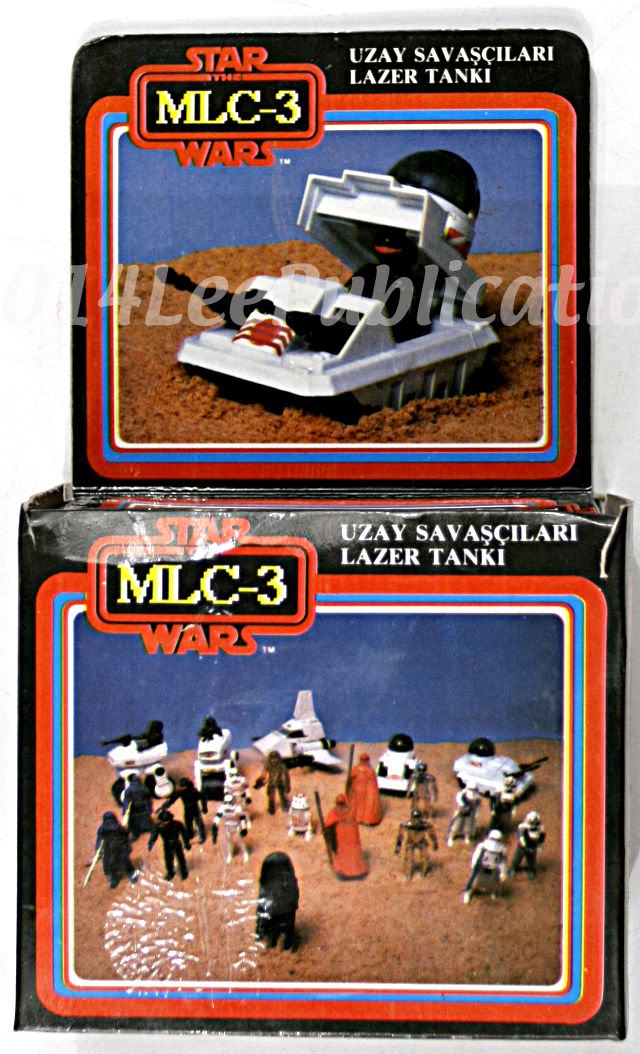 That wraps up the coverage of the market for this month. Stay warm and keep checking back at
The SWCA dot com for other great blog updates from a galaxy far, far away.