All rise, Court Wars Episode III is now in session.... 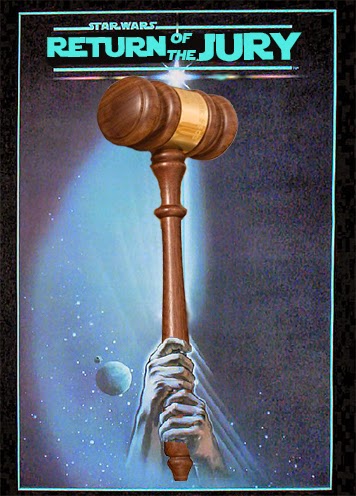 This is our semi-regular blog series chronicling Star Wars and collecting related issues found in actual legal cases. These are real cases and real people. No names have been changed to protect the innocent or the guilty. Here’s what's our docket today:


Langlotz v. Picciano (683 F.Supp. 1041) 1988:  Here's an odd one where our plaintiff is contending that "defendants infringed his rights to free exercise of religion and freedom of speech." Basically, our plaintiff is Kenneth Langlotz, who was hired to be an outreach counselor for the Fairfax County Court Services Unit in 1977. It's his job to council kids in the juvenile court and his supervisors were named Lee McCormack and Keith True, among others. Several years into his employment though, in 1983, problems began to arise. Most of them are off-topic to this blog, but there are a couple of incidents which concern us though. I'll just use the court decision since they do a really good job of explaining them:
"The principal area of concern was that plaintiff was continuing to use a philosophy which he called 'The Force,' based on the Star Wars films, to counsel juveniles, despite repeated directives not to use this approach. McCormack received reports from other staff members that one of plaintiff's juvenile clients had ridiculed plaintiff's discussions of the 'The Force' and described plaintiff as weird. When McCormack directed plaintiff to cease talking to clients about 'The Force,' plaintiff flatly refused and accused McCormack of violating his free speech rights. Because of plaintiff's agitated behavior, McCormack called True into the office. True advised plaintiff that his behavior might be cause for termination. Plaintiff later agreed to cease talking about 'The Force.' Subsequently, plaintiff told McCormack that he, plaintiff, was in a 'war with the devil' and that his problems were occurring because he was an 'agent of God.'"

Some of his past behavior is also given:


"Plaintiff related to McCormack that he had intervened in a car chase involving two other vehicles. A passenger in one vehicle had made an obscene gesture to the occupants of a second vehicle. The driver of the second vehicle then began chasing the first vehicle. Plaintiff decided to join the chase and eventually all vehicles stopped at the side of the highway. When the passengers of the other vehicles, two of whom were armed with pipes, got out of their cars, plaintiff approached them and was purportedly able to dissuade them from violence by telling them to 'go with The Force.' Plaintiff viewed his actions as appropriate, indeed mandated, in light of his role as a probation officer with the Juvenile Court."

The juvenile court disagreed though, apparently believing that working as a councilor was not the same as being a Jedi Knight:
"Plaintiff received an official reprimand and was instructed, inter alia, to get a psychiatric evaluation
and to cease using 'The Force' philosophy with clients and staff."
The situation continues to devolve however and so the plaintiff files suit, arguing a number of different things, most of which don't really concern us. He loses his case though. 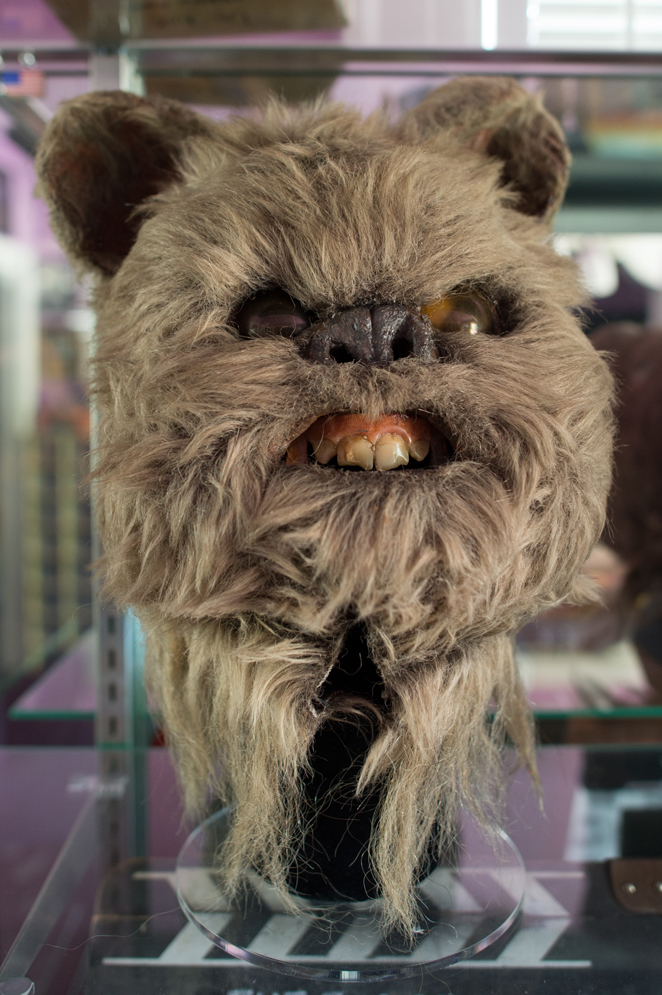 Personally, I like to imagine him wearing this Prop Ewok mask. 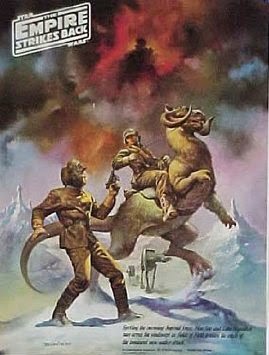 In search of a cool refreshing Coke

The case is rather complicated, made all the more so because the decision is very brief, but essentially, Fox and Star Wars Corp are arguing with a company called Unigraphic about a licensing deal and when it was signed. The Facts section of the case is somewhat scant on details however. It seems that Unigraphic is in a disagreement with Star Wars Corp about a licensing deal for an unnamed consumer product they've been involved in. Most of the argument at this point is over venue. Unigraphic wants the case to be in New York, but Star Wars Corp. wants it to be in Los Angeles. Unigraphic is trying to use the fact that Fox Licensing is located in New York to get their foot in the door. The situation is tricky however, because:


Ultimately, the court decides that there exists a genuine question in this case, so it denied Star Wars Corp's motion to dismiss, and sent the case back to down for trial.

Personally, I found this case confusing. As such, I reached out to Charles Lippincott, the only man specifically named in the decision (who is actually on Facebook, and who regularly posts all kinds of interesting behind the scenes stories and paperwork from his time in the industry, so I highly recommend following him). He thought seeing the case was interesting, but wasn't initially entirely sure what the central issue was concerning either, saying:

"I find it very amusing that the defense used was I was a Publicist so the court is asked the throw the case out.... Hahahahha... Now I'll have to rack my brains to try and remember who Unigraphics is, and what this suit could be about."

He later went on to discuss the plaintiff in the case:

"Anyway, the Unigraphic's case is against Star Wars, so [the] link has to be a suit about an early printing job. The suit is against Star Wars Corp, which was later folded into Lucasfilm. I've tried to figure out who Unigraphic was but can't remember. This probably has to do with printing plates, negatives or something of the sort... I'm guessing that because the company's name is Unigraphic. Was SW/20th Century trying to get back plates? Hmmm... This ties into what I was saying about all those print runs of things like the triangle logo or Bread Cards... Printing off early Star Wars stuff is like printing money, 'cept as far as the Feds are concerned, it's not 'illegal.'"

Collector and SWCA Editor Isaac Lew was able to confirm that Unigraphic was indeed a printing company, but just what consumer product they could have been printing for Star Wars Corp at that early date remained uncertain.

Thankfully, I was contacted soon after by Mr. Lippincott again, who was able to clear up the mystery, saying:

"Ahhh... the date has joggled my mind. On Feb 21 & 22, 1977, Marc Pevers and I were looking to license Star Wars at the Toy Fair. Marc was 20th Century and I was Star Wars Corporation. This is what I think the suit is about. Marc Pevers and I met with this guy who claimed he had connections to set up deals with Coca Cola and others. The guy tried to claim he had access to a broader licensing arena than he did. Well, turns out this guy hadn't the connections to set up a deal... Coke is split into two parts. There is Coke Syrup and Coke Bottling. When it comes to things like McDonalds and other fast food companies, they deal with Coke Syrup. When it's Coke in stores, it's Coke Bottling. These two entities have distinctly different territories they cover. The guy from Unigraphics claimed he set up the deal with anything we did with Coke, which he didn't. His suit was like Lynn Pressman's suit, completely unwarranted. If I remember right, he lost the suit...  That's the story on the lawsuit. What is interesting is how Star Wars Corporation used as its defense the fact I was not an employee of the Star Wars Corporation. By claiming I was not authorized to license, they said the suit was without merit. Hahahahah.... what a joke. This is an excellent example of how the corporate wheels were put into motion to wipe me out from its history. I would appreciate it if anyone could find a link to the case filings. Star Wars Corporation's defense strategy is actually defamation. And yes, George had to know about this strategy because he was kept apprised of legal filings."

I looked up the case through the NY court system, and evidently the two companies continued to fight about this issue into the 90s. The case was finally settled pretrial on 1/29/1991 for $450,000. I have no idea why a contract case would take them from 1978 to 1991 to reach a resolution, but that's what it's looking like happened. The electronic record of the case doesn't include any of the actual filings however, so we can't see what's going on. The case is all part of the public record though. The index number is 013274/1978.

Thanks again to Mr. Lippincott for helping solve this mystery!

I think Vader just wants it more. He's got my vote.

Rogers v. Bradley, 1995, (909 S.W.2d 872): An off topic case involving whether or not to recuse a couple judges because they had appeared favorably in a campaign video sponsored by Defendants. Apparently, the video was a parody of SW featuring "bad" candidates as Vader and "good" candidates as Luke.


US v. McLaughlin, 2005 (U.S. Dist. LEXIS 39402): Case deals with a drug stop, and the drug dog alerting to the presence of drugs. What makes it a SW related case is that the drug dog's name is Vader. This case also features one of the best quotes I've ever seen in a case:

"After receiving extensive testimony, the Court notes that Vader does not appear to be anything like the powerful Dark Lord of the Sith, Darth Vader, from the epic saga Star Wars. In essence, Vader the dog, appears to be a lovable pet that was rescued from the Humane Society and put to work as a police dog."

Fairbanks v. Kenner Products, 805 F.2d 1034 (1986): Kenner employee sues company over racial discrimination, Kenner security saw both Fairbanks (who is African American) and a white employee stealing company property (plaintiff's words), and only Fairbanks was then fired. Kenner introduced evidence of why they treated Fairbanks and the other employee differently. The court sided with Kenner both at trial and on appeal.

Hyland v. Kenner Products Co., 1976 WL 561 (S.D.Ohio): A woman files a sexual discrimination suit against Kenner in 1976. Interestingly, the court describes all sorts of meetings she had with the higher ups at Kenner, including Bernie Loomis, to discuss her claims. She seems to have worked in “play-test analyst.” It was apparently her job to spy on the test kids as they were playing with the toys and report her findings to the company. She was earning $11,400 a year though. It's interesting that the court takes notice of the fact that the parties HATE each other.


And finally we have some clippings of some other interesting Star Wars related legal cases. The first comes from the Montreal Gazette, September 14th 1978. It discusses a suit filed against Fox by theater owners, because Fox was requiring them to also show a less popular Fox film if they wanted to show Star Wars.

The last case is another clipping, this time from The Bulletin on November 27th 1985, and discusses the suit Lucas filed against two groups who were using the term "Star Wars" to refer to President Reagan's missile defense network.