Welcome to a special edition of the MarketWatch for the month of December. Now a lot of you have all your Holiday shopping done and may have even celebrated the season with your family and friends. That doesn't stop me from bringing you a quick recap on some of the best deals and gifts leading up to the Holiday season from our favorite site eBay. This month we’ll focus on 10 items all under $1,000 that would make great gifts for the Vintage collector. I wanted to bring to light some pieces that may not be top of mind for all collectors, but should be a home-run as gifts due to the fact that each has a cool aspect, a lot are rare, and a lot were pure steals given the influx of items listed during the Holiday season. Unlike the usual monthly updates, I’m covering items that may fall at the lower end of the price band, as I typically discuss items on the high end and ultra rare. To my surprise if you’re stalking eBay you can really find great deals on high end and rare items. Thus here we have a listing of great items that covers the gamut of Vintage Star Wars, without just focusing on the highest ticket examples. So although it’s a MarketWatch update, it’s a little bit reversed from the normal coverage.

An odd duck to start the list is one of those white boxes with figures inside, our favorite vanilla segment of the Vintage line; a Mailer. In this example we have one of the 20+ sets created for retailers during the Return of the Jedi toyline release. This piece from what we can see is a sealed set, and has been cased by AFA, although not graded. These sets are fairly common given the number released, but this particular set is one of the exceptions to that rule as it includes Darth Vader and two Snowtroopers. The figure combination is always key with multi-figure mailers as it really drives the demand and rarity, and in this case it’s one of the top few released in the ROTJ series. With a non-sealed version with open figures going for nearly $500 earlier this year it’s easy to see why this piece made the list. If you have an ROTJ collector on your Holiday Gift list this would have made you look like a superhero!


Return of the Jedi 3-Pack Mailer 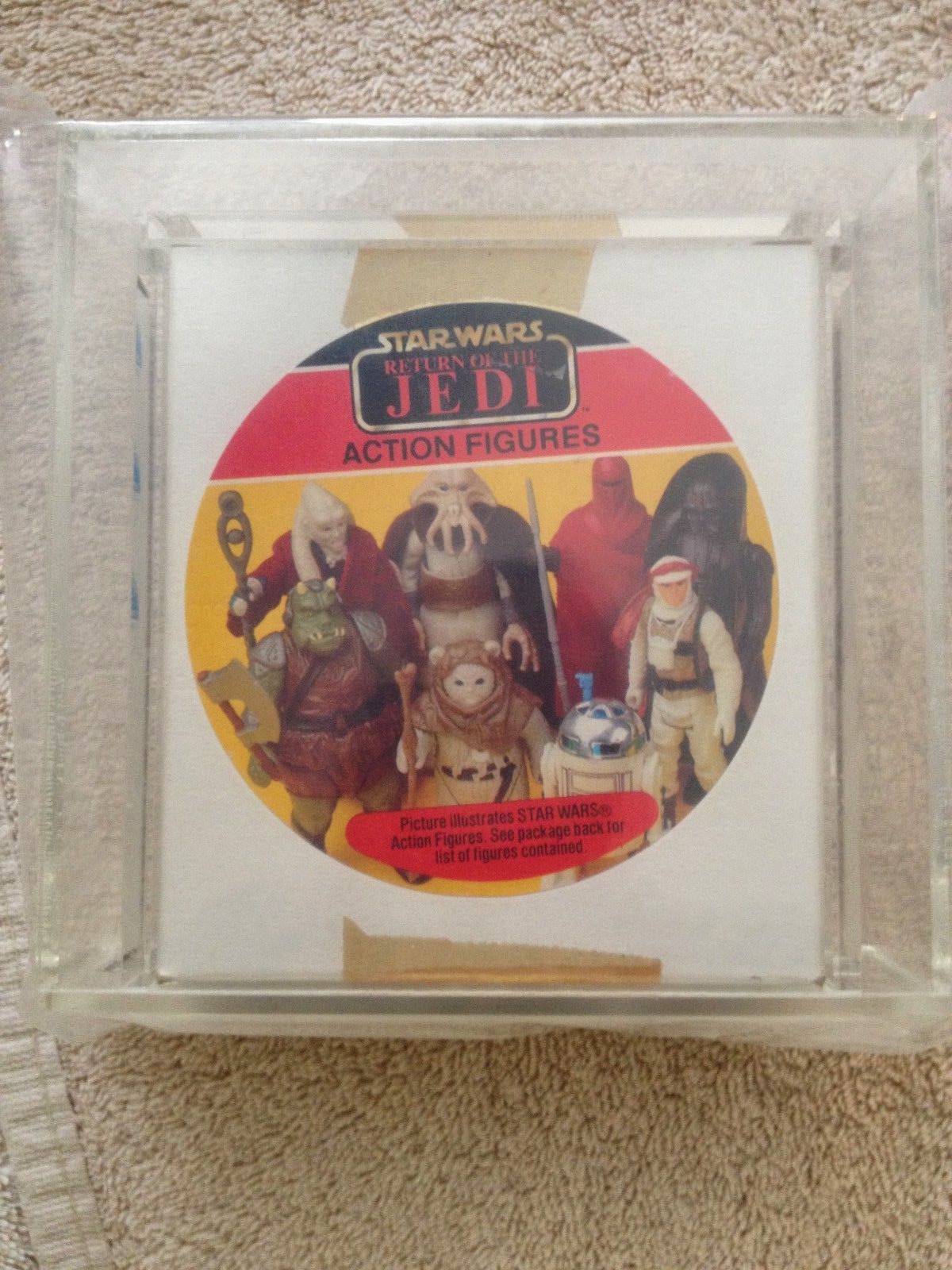 Next up on the list is the coolest Ewok item of them all, the Ewok Battle Wagon. Fully equipped with a battering ram and a giant skull from some other Endor inhabitant, it’s quite simply the best of the best in the world of the furry little critters from Endor. Add in the fact that it’s one of the few vehicles created for the Power of the Force line and you have yourself a great gift for any collector out there. With an AFA grade of 80 and a price tag under $500, this one was a steal as like examples have sold in the $700 and up range consistently for the past few years. 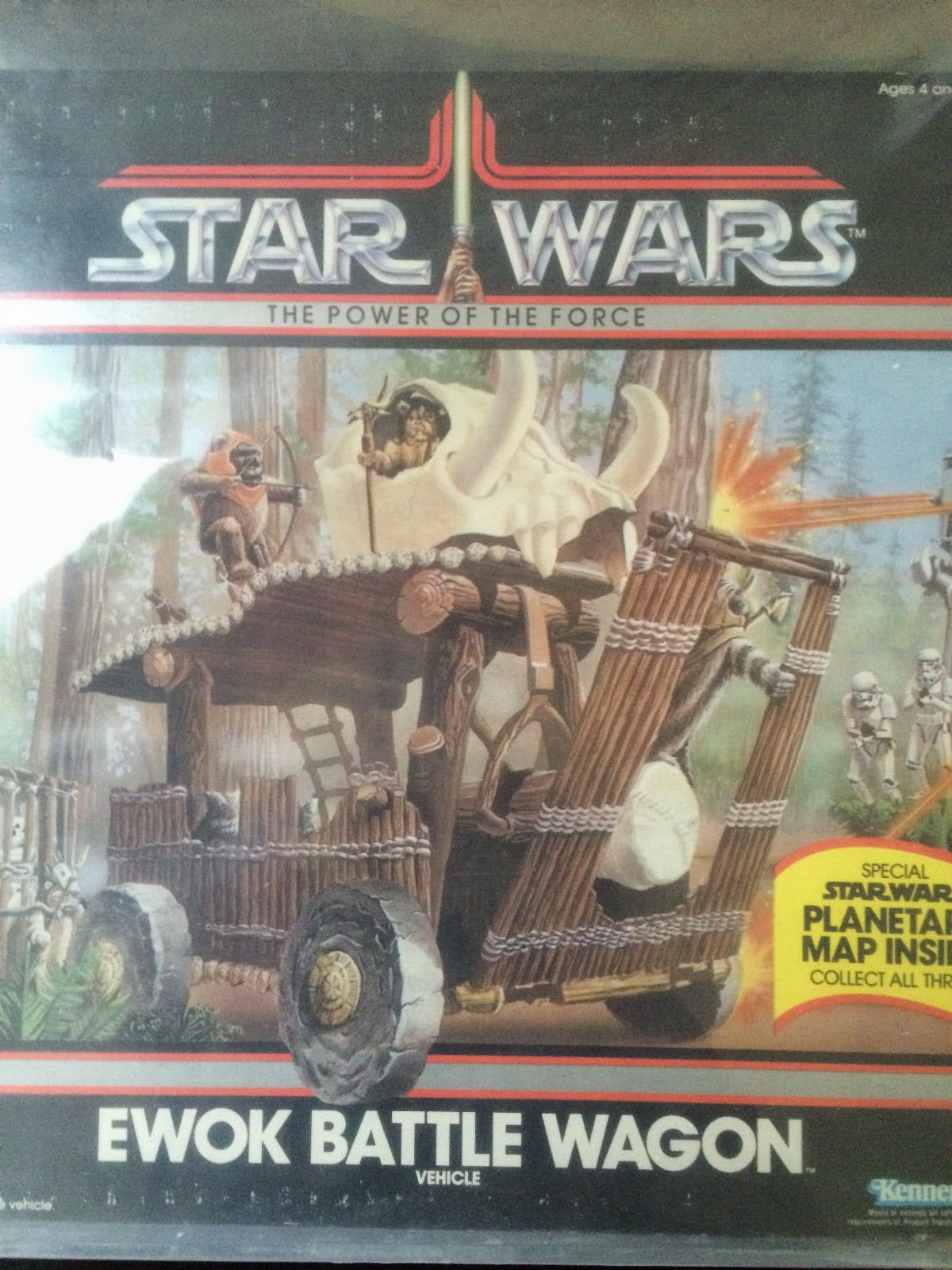 Number three on our list isn’t exactly the cheapest example of the figure, but ask any Han Solo collector what the toughest cardback to find in good condition with a clear bubble is, and they will quickly point to the alternate photo Jedi cardback. Like most of its alternate photo counterparts such as Luke Gunner and Tatooine Fett, collectors of all kinds gravitate towards it; it’s a great example of how easy it can be to reinvigorate a carded figure that has been out for over 6 years. This particular example is actually pretty rare given there are only a handful of clear bubble examples of them, with very few that would make the AFA 85 grade. A great item for your Star Wars loving counterpart! 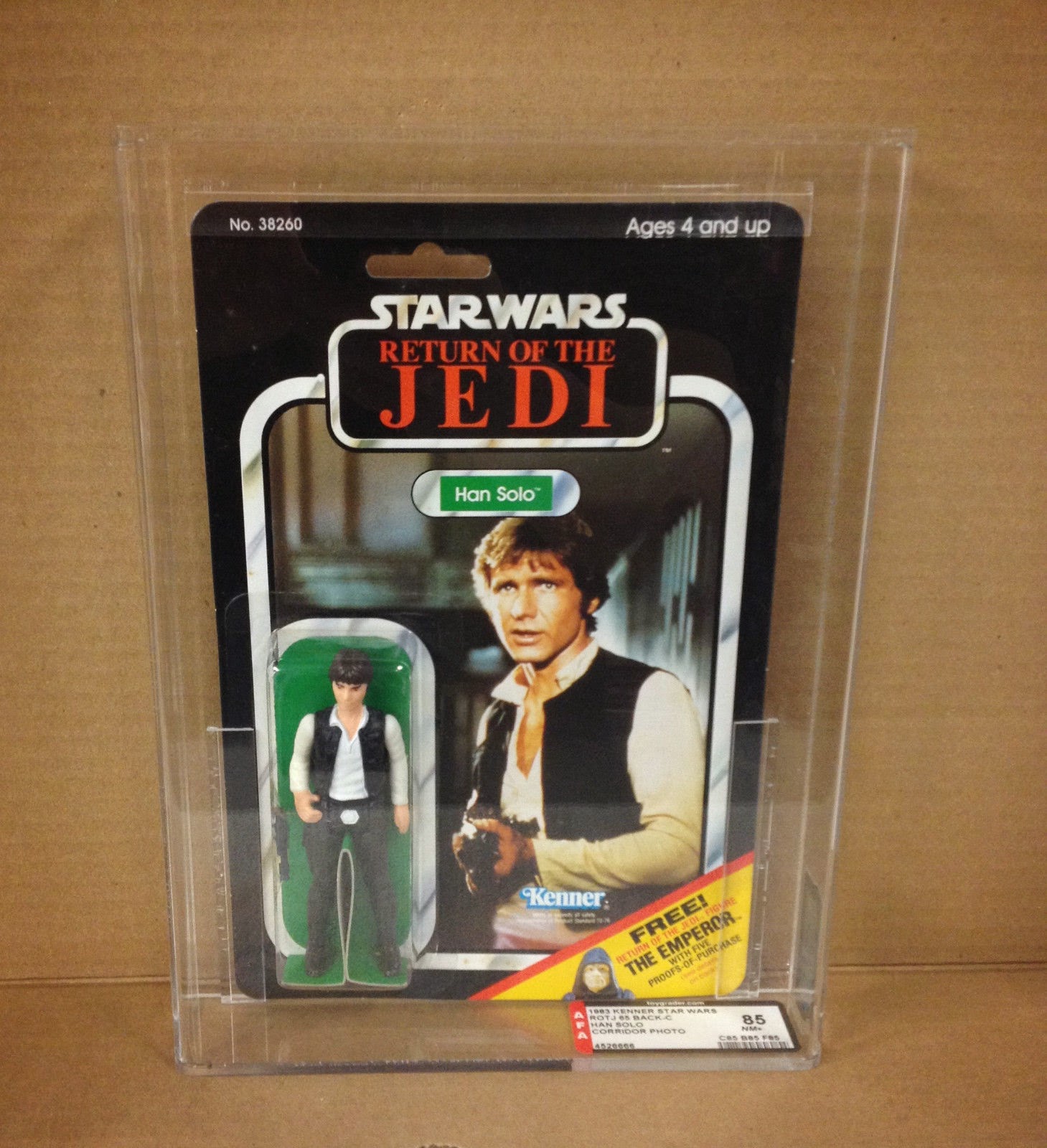 Coming in at number four is our Vehicle to make the list. Something that could make the regular MarketWatch because it’s simply the best example of one out there, we have an AFA85 B-Wing fighter.   Not the cheapest per capita, but if you have an extremely particular collector that you’re buying for, this is a great piece for what you get. Because of its size there just aren't that many B-Wings out there that can pull an 85 -- Making this one of the best examples of this item to ever make it’s way through Roswell, GA. It’s a great item and although you can get an ungraded piece for under $300, it’s hard to say that the condition and casing of this aren't well worth it. 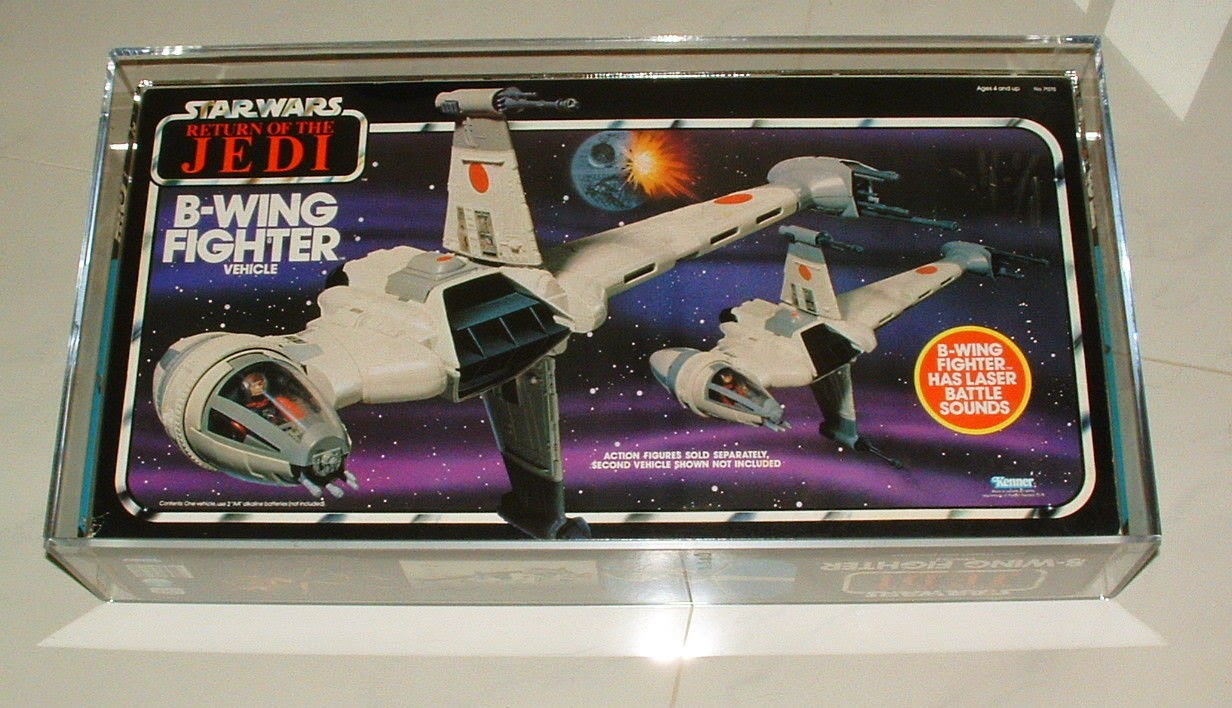 Rounding out the top five of our list, is a nice complete boxed example of the 2nd best Bounty Hunter (yes I just called it) in the Galaxy, IG-88. Some may argue that Bossk or even Dengar holds that title. Well if they do where they hell are their 12” figures, huh? This piece always stands out regardless of its company. It’s truly a fan favorite and being the rarest of the 12 inch production figures is like being the hottest girl at the high school dance, so point A proves B and so on. Not being a 12 inch collector myself, I have always wanted to keep one of these in my collection and many collectors share my sentiments on the topic. Thus, he’s taken our number five position. 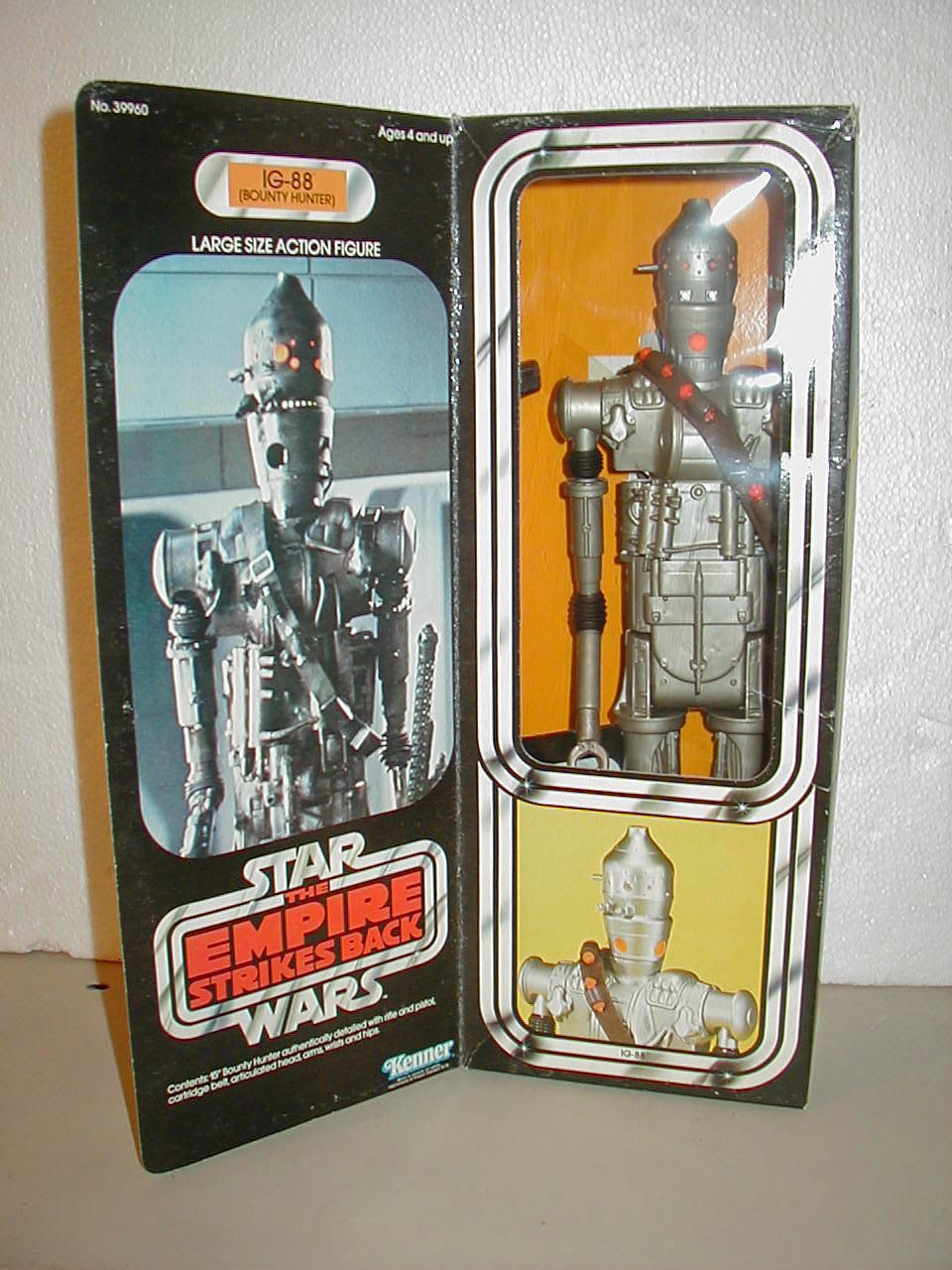 Coming it at number six is a an unloved item that in its own way is so cool. Like many of the early Star Wars playsets, the Rebel Command Center is more cardboard than playset. But with the cool three dimensional cutout and really the only Rebel home base playset in the entire series it has a cool place in the pantheon of Vintage Star Wars. Given its rarity, it’s easy to say most collectors don’t have one in their collection. And with its exclusive retail status, great back drop, and figures featured, there are few that would scoff at receiving one of these bad boys. 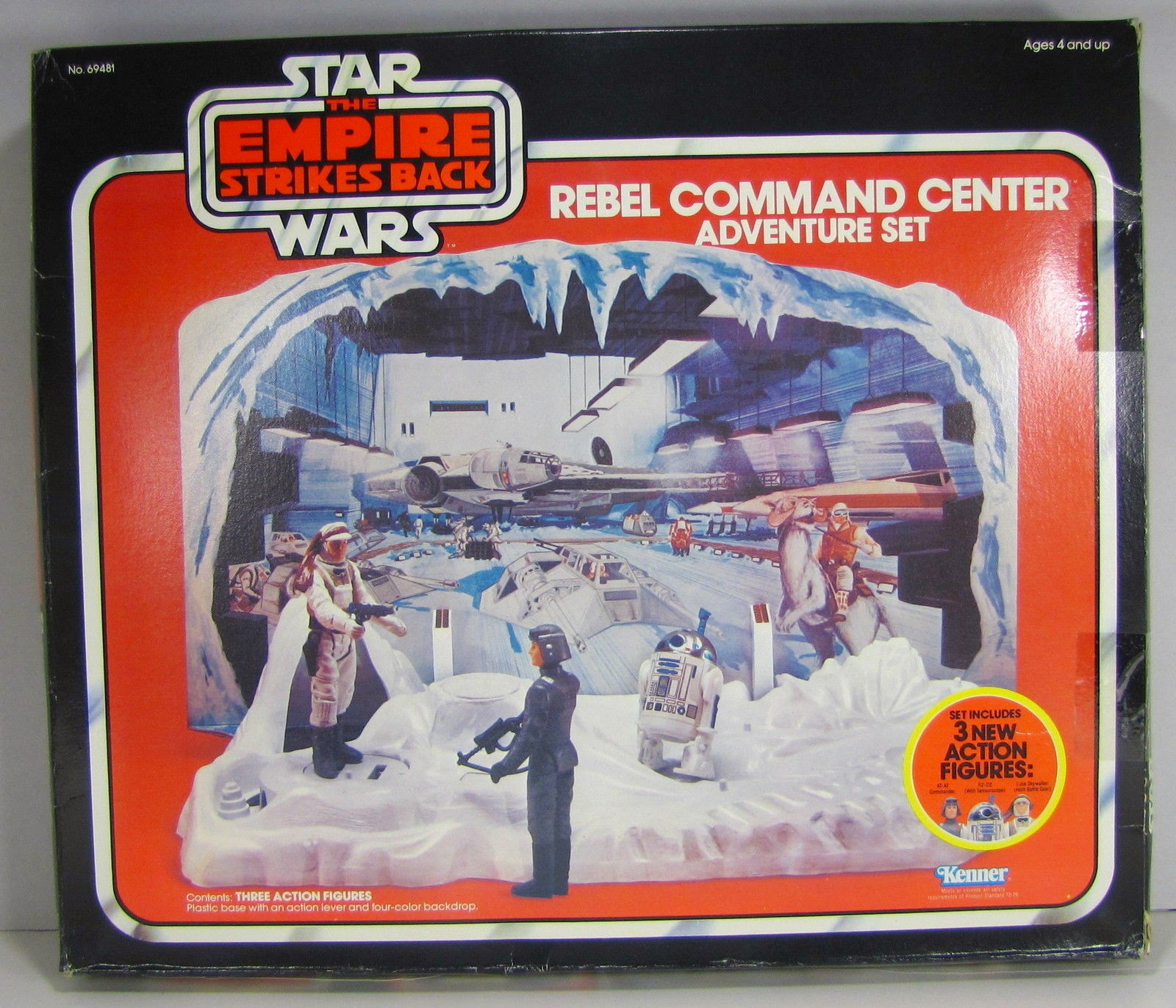 With tons of them on the eBay market over the past decade, it’s hard to call the Vinyl Cape Jawa a rare figure. Sure they demand a lot of money, but at any point in time you can find one out there on eBay with an auction ending pretty much weekly. However that doesn’t distract from the fact that this is an iconic figure and one that most would love to have an example of. Throw in a COA from CIB and a little AFA acrylic, (yes that’s three acronyms in one sentence) and you have a great collector’s item that would be appreciated by the most avid collector, to the most casual. 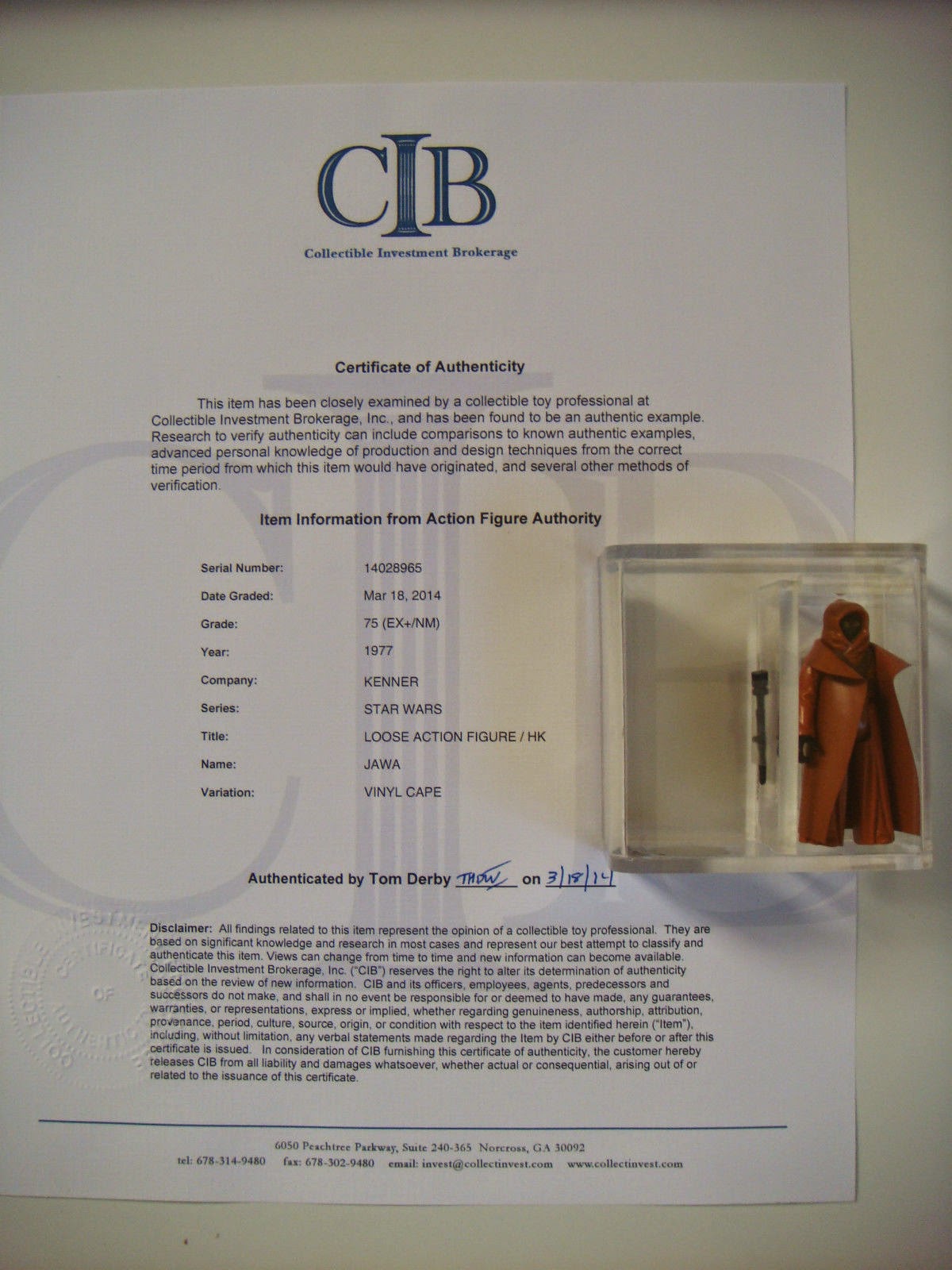 Moving from one expensive loose figure to another, our number eight spot is held by our old friend the Double Telescoping Lightsaber version of Luke Skywalker. Without sounding completely repetitive, this figure much like the Vinyl Cape Jawa is rare in a way, but also readily available with auctions ending weekly on these guys. Most that you see trade on the market are graded these days, and I think that’s a good thing. The loose grading of figures is one area that I have a hard time debating with anyone on in terms of legitimacy as it makes the figure look iconic, just my two cents. Just like the aforementioned Jawa, this figure is great for any collector with any focus as it’s such a well-known and desirable piece. Although they are readily available most collectors don’t have one, and I don’t know many that wouldn’t love to have this piece, even if there not a loose figure collector. Thus it’s gifty, rare and can be found for well under a grand. 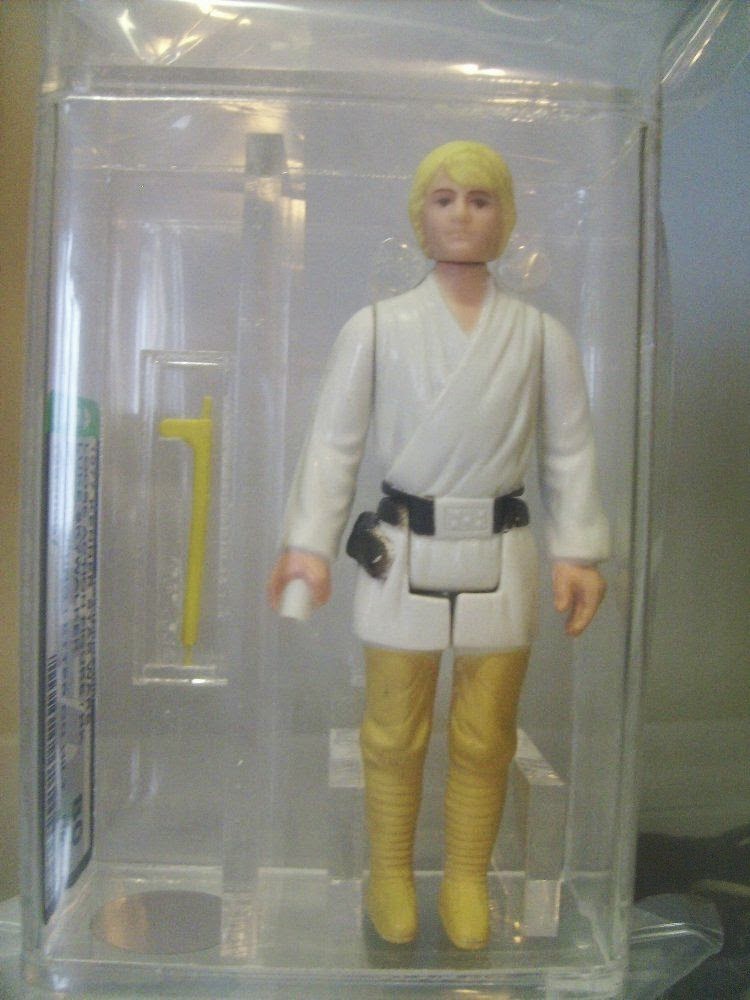 The number nine position belongs to another steal of a very rare figure, the Droids release of Boba Fett. I won’t pine on about how great Fett is as a character, or the fact that he demands more per capita than any other character, or that he has such a cool persona...okay I’ll stop. Simply put, you have the rarest version of the most sought after figure in the production series, complete with a solid cardback and what appears to be a clear bubble. Whether you’re a Droids fan or not, this is quite simply one of the coolest figures you can get in the overall series -- the artwork is great, the coin is superb, it’s just all around a great item. Add in the great condition and a price tag that’s roughly half of what they normally demand...this made someone’s Holiday just a little brighter.

And on to our last auction of the month -- one that should be marked not only by the item itself or the rarity of the item, but more than anything by the price of the item, because people, someone got an absolute steal on this one! The POTF Gamorrean Guard is one of a few extremely tough to find POTF figures, along with the featured figure from last month’s Podcast the At-At Driver, Nikto, Yak Face and Anakin. Most of these demand over $2K for a high end example. Here we have one for under a grand. A buy it now auction with someone that was able to drop it like a steaming lava rock into the hands of a very happy collector. Not only was it a great steal, but it’s a great gift for any collector. The POTF Gamorrean Guard is such an iconic piece that Gentle Giant skipped its ROTJ release in their 12 inch scale line to feature the POTF version given its place in the Vintage community as a rare and ultra-cool item. The Gamorrean Guard in this case received an AFA85 -- the highest grade of any example out there. Thus seeing this piece for the price that we did makes it the most expensive and one of the best gifts we looked at this month. 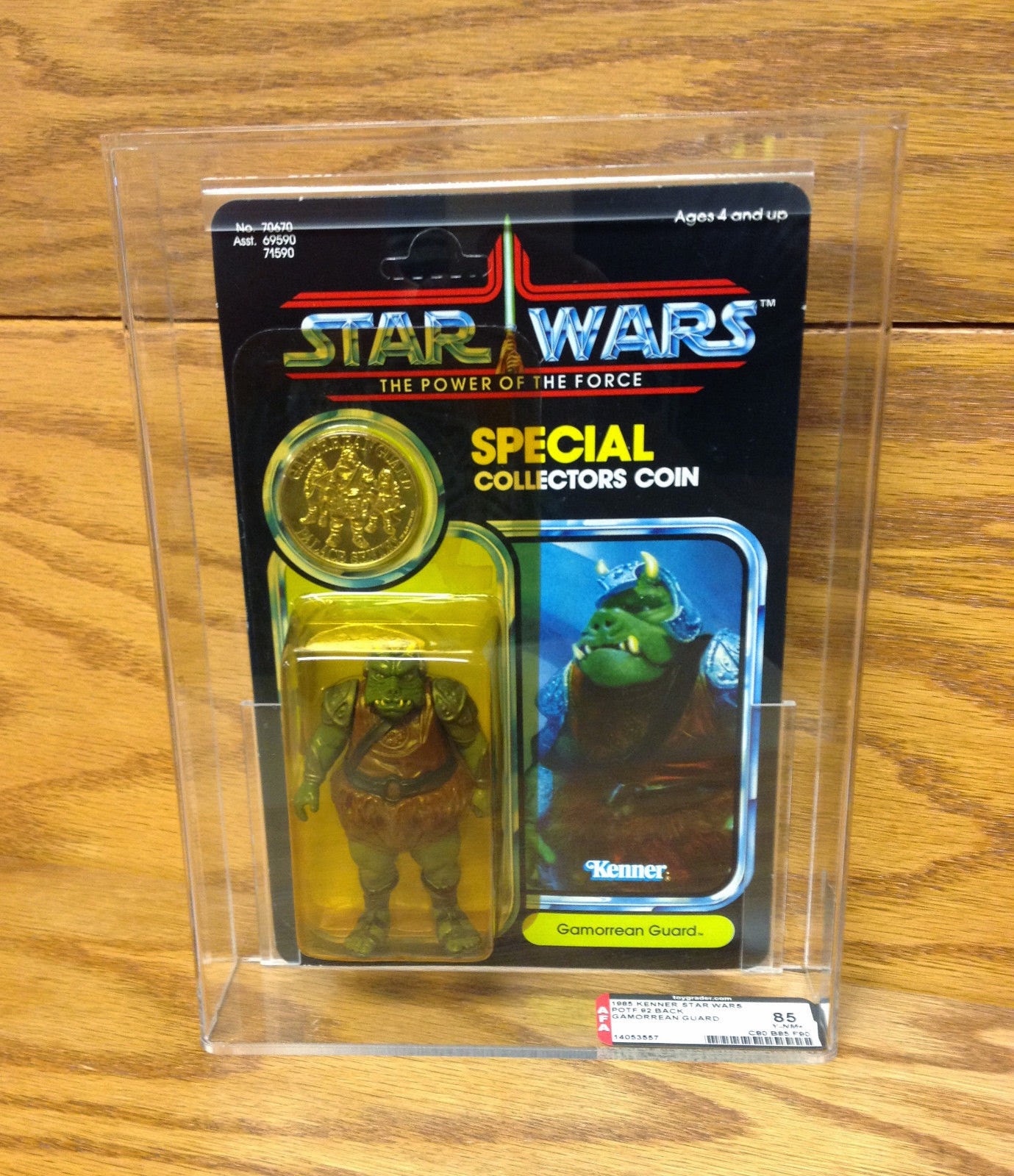 I hope you enjoyed the Holiday MarketWatch. We’ll be back with some of the biggest and rarest items to hit the market in the Month of December this coming January.

Until next time, Wampa Wampa.