We have what I hope is a special treat for our readers this Christmas: a tell-all column from Mookiee the Ewok.

Mookiee has had a rough go of things these last few years. Maybe you saw that story in the Enquirer. But when all is said and done, he's had some great experiences, and he's definitely played a part, however small, and however fuzzy, in the behind-the-scenes story of Star Wars.

I have to warn you: Mookiee is a salty and unpredictable character. I've done what I can to clean up his language. Also, we can't vouch for the veracity of any of Mookiee's claims. Mookiee is a notorious confabulator. And let's face it: There have been times in his life when he wasn't exactly sober. For what it's worth, I believe Wilford Brimley to be a very nice man.

With that in mind, have a great holiday season. And keep Mookiee in your thoughts. Seems like he needs it. 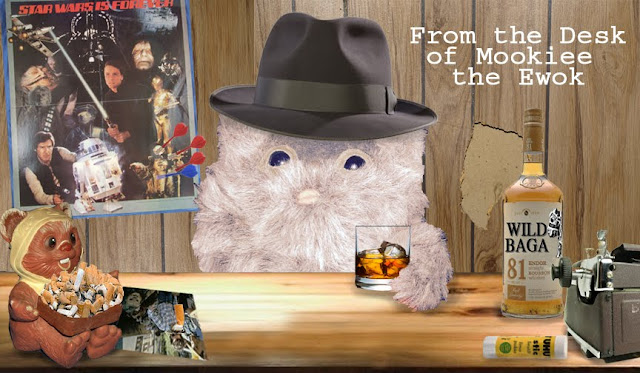 As I  follow the news related to the imminent release of The Force Awakens, one thing bothers me. Specifically, there aren't enough g*d**n Ewoks.

Yeah, I know exactly what you're thinking: "Mookiee's been hitting the bottle again." Well, of course I've been hitting the bottle again. It's the holidays, it's been 30 years since I've had a paying gig, and chicks dig "woklings" about as much as they dig "action figure collectors." The last woman I approached told me I could text her sometime. Then she said, "Aww, I forgot -- you don't have fingers."

Fingers or no fingers, you have to admit that we Ewoks have had it hard since the '80s.

First there was that TV movie featuring Wilford Brimley. Don't get me wrong, working with "Oatmeal" was a dream come true. I mean, who wouldn't jump at the chance to act beside a man who thinks "hygiene" is the title of a Greek play no one reads anymore?

Grooming habits aside, Brimley was an adventure. If he wasn't trying to get Princess Kneesaa to sit on his lap, he was sticking two cigars under his top lip, crawling around the set on all fours, and bellowing, "Look at me, I'm a space walrus!" We had to shoot some scenes a dozen times because Wilford couldn't remember what an Ewok was. He thought we were gnomes sent from the future to warn him about an enlarged prostate. Every time the director called "action," he'd bend over and wince.

Fortunately, Wilford played no part in the Ewoks cartoon. But then the cartoon had its own problems. Have you seen the episode where...

Oh, you haven't watched it either?

Well, maybe you were doing something more amusing, like staring at the ceiling in a semi-vegetative state, or eating Grey Poupon straight from the jar while sitting in Logray's kitchen in your underpants and yelling, "Are you not entertained?!" at the top of your lungs.

Not that I've done either of those things more than a couple of times.

According to Hollywood rumor, after "The Star Wars Holiday Special" failed to live up to expectations, George Lucas bet Steven Spielberg that his next TV project would be a masterpiece. When Spielberg came to collect his winnings, he said, "That Ewoks cartoon was terrible, George. What happened?" To which Lucas replied, "Joke's on you, Steve. I have too much money to care about losing bets or making masterpieces. Have you heard about my new movie? It stars a duck, and he plays guitar."

Seriously, Ewoks was so bad that two-thirds of the action figures in the associated toy line weren't even Ewoks. They were these green things that looked like the Grinch from How the Grinch Stole Christmas.

When the prequels rolled around, we all thought George would throw us a bone or two. While watching them I saw Tusken Raiders. I saw Jawas. That a**hole Ree Yees was even in a scene or two. But not a single g*d**n Ewok.

When I asked George about this, he said, "Well, you know, the Ewoks are industrious, self-sufficient beings, and they keep to themselves in the forests."

Oh, I see: We're like the Unabomber. Or the Palins.


Mookiee: Jawas are great, George, especially if you don't have to live next to them. But shouldn't you show some love for the guys who were the decisive factor in the battle in Return of the Jedi -- the ones who went to bat for the Rebels in their time of direst need?

Mookiee: I have no idea what you're talking about.

George: Nien Nunb is a Sullustan. You can look it up on Wookieepedia.

Mookiee: George, Nien Nunb is a congenital moron. Even Lando can't understand what he's saying, and Lando understands Lobot, who doesn't speak. Besides, Nunb only got the gig as Falcon copilot because Chewbacca was busy helping...

Mookiee: Chewbacca was down on Endor. And he was busy helping...

Mookiee: Oh, suuure! Praise Nien Nunb, the Jar Jar of the '80s, and ignore the heroes whom audiences everywhere saw freeing the galaxy from tyranny and oppression.

George: Well, that's not what I saw. And who are people going to believe, the guy who created Star Wars, or the guy who got drunk at a Lucasfilm Christmas party and told everyone he was the inspiration for Survivor's "Eye of the Tiger"?

Mookiee: I stand by that story.

George: And I stand by Rick McCallum. Doesn't make it right.

Mookiee: George, I remember the movie. There are hang-gliders made from rawhide, logs bashing the heads of scout walkers, and Ewoks playing drums on stormtrooper helmets. There's even a song -- a song sung in the language of my people!

George: Oh, we deleted the song in '97. Maybe you didn't see that version. I think it came out while you were <<makes air quotes with fingers>> vacationing in Thailand with John Travolta.

Mookiee: You know what the "B" in "Nunb" stands for?

Mookiee: "Bourbon." Make it a double.

Well, there's no need to prolong this. It's nearly Christmas, and the doctor says I need to clear my house of sharp objects before Uncle Gundy gets here for our annual "alone on the holidays" party. No, I'm not going to make him dress like Santa this year. And no, I'm not going to hold him hostage with a pair of scissors until he tells me I've been a good boy.

I'm sure I'll see the new movie along with the rest of you mindless zombies. Maybe J.J. will surprise me, and when Captain Phasma takes off his helmet, it'll be my man Teebo under there.

Yub to the nub,

Thanks to Jarrod Clark for trekking to Mookiee's wood-paneled compound to get a photo of our author in his native state. And thanks to Tom Quinn for suggesting that we track Mookiee down in order to get his take on the lack of g*d**n Ewoks. As to Mookiee's claims about Nien Nunb, I'd say this serves as at least a partial confirmation.
Posted by Ron at 8:30 AM