We’re back in the swing of things with our monthly MarketWatch update on the Star Wars Collectors Archive. So much is going on in the hobby these days it’s hard to stay on top of everything. One thing that is apparent for anyone following eBay, Facebook or even those still on RebelScum is that the market is at an all-time peak. Items have reached phenomenal heights, and not just online but at shows across the globe. The season of Star Wars is upon us, from toy shows, to big finds and everything in between the excitement of The Force Awakens has captivated collectors and casual fans alike as the anticipation for the newest installment of the saga has people across the world rejoicing for the return of Star Wars

This season we’re going to hone in on some impressive auctions from the last 60 days -- some rarer than others but all impressive in their own right.

Before we get into the auctions themselves, I felt it was appropriate to take a moment and address where prices are in the hobby today and over the last year. A lot of collectors are very bullish on the market, feeling that the movie will lead to a new era of high prices and growth in the value of their collections. This feeling is not unwarranted, however I think that all collectors need to take the current trends as just that, current trends. We’re seeing phenomenal peaks in the hobby these days, but the question of sustainability of these prices is something that all collectors should ask themselves given results have been mixed in some cases, especially on eBay leading into the holidays.

This year I was able to travel a lot more than in year’s past and was able to attend several events, from Wizard World Comicons, to Star Wars Celebration and even the Cincinnati Toy Show. Every venue has something different to offer, but the one thing that is consistent at them all is die hard collectors. Excitement has been high all year with our brothers and sisters in the hobby, and you see everywhere you go. Along with spirits being high at each event, one other thing is very consistent: a dialogue about how difficult it’s become to find items. Collectors are holding onto more than in the past and it’s leading to a deficit in the amount of high end items available. In a sense the hobby is very healthy, however the scarcity of certain items is leaving some frustrated and driving up the price of items that really aren’t that rare.

The core concept of supply and demand is really the underlying reason for a great deal of price appreciation in the hobby. Supply is at an all-time low, thus demand is at an all-time high. Sprinkle in the excitement of a new movie and a ton of media coverage in the hobby and you have the perfect storm. Thus, as we enter an era of a great new movie, an era of new blood in the hobby and an era of a new peaks in pricing, if one thing is certain, it’s that it the rare pieces will keep getting tougher to find, and the spirit of competition among collectors will continue to evolve.

Although many segments of the hobby haven’t kept pace with the prices that we’ve seen in the action figure segment, one that is considered by many to be a “fringe part of the hobby” has kept pace right along the Vintage Kenner toy line are the Power of the Force coins. The segment that is considered by many to be one of the most frustrating areas to collect in has seen incredible prices over the last year.

The core goal of many is to complete the 62 coin set, and from what I’ve seen and heard this quest has one of the highest abandonment rates of any run in the hobby today. This is mostly due to the fact that the Category 4 and 5 coins represent such a small portion of the overall availability and demand incredibly high prices, with coins like the Sail Skiff seeing prices over $1,500 in the last year. Given this, several collectors have taken the route of buying a complete set and saving themselves the headache of years of time and angst piecing together the run.

In our first auction we have someone that has elected to do just that. This 62 piece collection of the POTF coins is most impressive. With an initial listing price of $25K it may have seemed daunting and overpriced, however someone was able to work this individual down to a price of between $13 and $16K. Given where the market has been on individual coins over the last year we can come to the conclusion that if all were available it would cost someone roughly $16-20K to put together a set, a move like would save a lot of time and overall investment into the set itself. 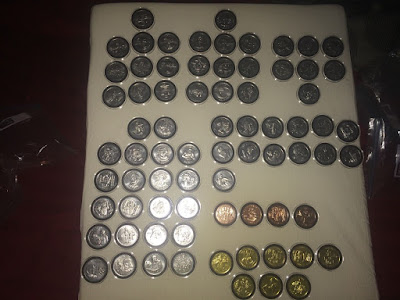 When it comes to 12 Backs there are so few pieces that are truly rare by definition. In fact when it comes to MOC figures from Star Wars the first 21 are some of the most common. Double-telescoping lightsaber figures are on one end of the spectrum, and just down the road is this little guy the Vinyl Cape Jawa. Averaging a price 10 times that of most 12 Back figures, he is one of the most difficult to find and by comparison to the others is actually rare vs. just sought after. This Jawa is a great example of just how much prices have appreciated in the past year. Selling consistently for $6 to $8K last year, it’s hard to fathom what impact one year has made on the going price. 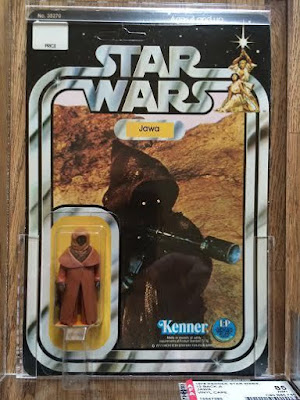 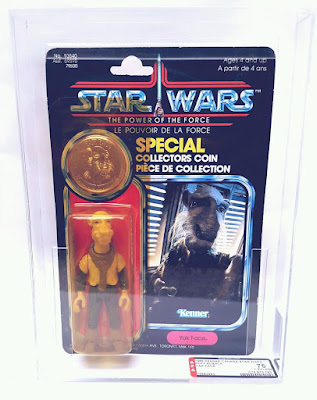 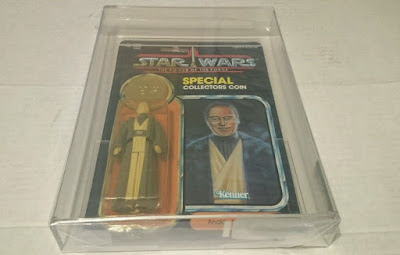 Our next two figures are staples of rarity and high prices in the hobby. Yak Face and Anakin Skywalker were only released in a few countries on a POTF cardback. Although a loose Anakin is fairly common given the mail away promotion for the figure, a loose Yak Face can command upwards of $450 these days. Think that’s crazy? Well, just the coins for these figures have gone through the roof in the last year with an Anakin coin commanding $2-300 and a Yak Face coin averaging around $500. Taking into consideration that the loose components are roughly $950 it’s easy to see that a good condition carded example is way up there in terms of price.

Both figures support the notion that prices have hit a new peak as these figures have never seen these types of prices in the past.   However crazy, they are a few of the rarer figures when you look at the line in totality and coming in with an AFA75 and an AFA…shows that collectors will continue to shell out large wads of money to for something that is in good shape.

Growth is at the core of the discussion this month, specially focusing in on price and value growth in the hobby. But it can’t just be measured by dollars and cents. For many long time collectors, growth is about expanding into new territories and new segments of the hobby. In the 2000s pre-production in the form of proof cards was an expanding area, in the last 5-6 years catalog mailers have taken off in popularity, and more recently store displays have gone from a niche to mainstream in our hobby.

The array of different store displays out there is pretty impressive. From backers to shelf talkers to hanging displays, there’s plenty to keep collectors busy. Unlike most segments, these items were thrown away more than they were kept, making finding them a fairly interesting task. Regardless the numbers of displays and portions of displays that survived is fairly staggering, however the frequency of their availability on the open market is something completely different. Thus when something comes up it usually commands a high price, and when something ultra rare comes up, the prices go through the roof. Such is the case with the item at hand -- the backer for a bin of figures used in certain mass retail channels. Very few have survived and if you had any interest in getting one, this was a rare chance to jump on it. 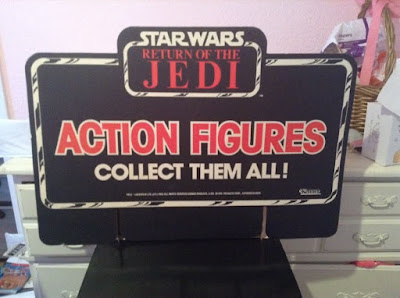 Our next item is a unique piece unto itself. Display stands were not a very successful segment of the toy line, and by the end of the ESB run these items were taken out of the core toy assortment. The ESB version of the display stand was Kenner's last attempt to get people to spend a few more dollars on a piece of plastic with a simple backer and sticker package. They put all their irons in the fire with this one, bringing 6 figures into the mix, and because of this it's one of the most sought after display stands in the hobby.

It's rare, and it has demand, and as anyone can see from the price you need to drop a lot of cash in order to find one. It's a great piece for any collector, but in this case I have to say it went for a lot more then it's worth, given it's open, and all but one figure has been taken out of it's baggie. Nevertheless it's a crazy market and I'm sure someone who needed this was more then willing to dish out the cash to find it. 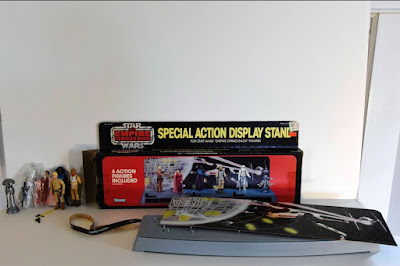 This month we saved what might be considered the best for last.

When it comes to things appreciating in price in a hobby there is always a segment that over performs vs. the norm. It’s a function of demand, the thing that differentiates the mundane from the majestic. In the world of Vintage Star Wars no other segment has seen as quick and as consistent an increase in prices as the Star Wars and Empire Strikes Back window box 3 Pack Sets. Theses sets have always been some of the most sought after production pieces in the Vintage line. With the situation we’re seeing over the past year, these have become truly expensive on a whole new level. Whereas one could buy a Creatures Set or Droids Set in the last few years for around $1,500, the sets are going for nearly $5K today.  Thus it shouldn’t have surprised anyone to see Brian’s Toys sell an ESB Imperial Set on Cyber Monday for over $9,000.

With a strong grade and being a mid-tiered piece in terms of rarity to the rest of the line, the ending price was in line with what one should expect to pay today. Whereas a few years ago you could put the run together for $80-$100K, some sets in today’s market on the rare side of the scale sell for upwards $30,000 on their own (for high grade examples). 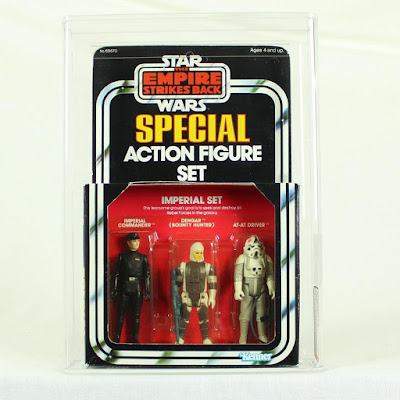 That’s it for this edition of the MarketWatch, thanks for another great year!

We’ll be back in February with our post-Holiday round up of the market.