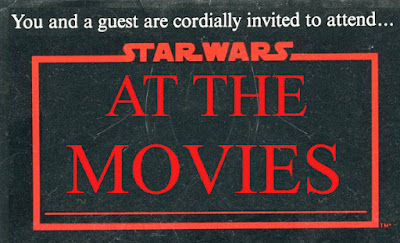 Here we are...opening week of a new Star Wars film. With fans and the rest of the globe reaching a fever pitch for Episode VII, I'm more interested (or perhaps desperate for a distraction) in taking a look at the hottest ticket of the late 70s and early 80s -- a preview screening of Star Wars or one of its two highly anticipated sequels. With advanced screenings for the press kept to a bare minimum for The Force Awakens to maintain its doctrine of secrecy, it's interesting to step back to a time before the original films had been unleashed upon the world.

Advanced screenings for major motion pictures are a critical marketing component to appease studio executives and other investors, gauge potential audiences, and ultimately generate buzz among the press and members of award-voting institutions (or suppress it, if all signs point to a flop). Tickets and invitations from such preview screenings represent another ephemeral collecting avenue for the historians in us, and there are several examples here on the Archive worth highlighting.

The following invitation/ticket to a "Spectacular Preview Screening" of Star Wars held at the 20th Century-Fox lot several days before the film's opening was held to benefit the Highland Hall Waldorf School in Northridge, CA. With dinner, dancing, cast meet and greets, and live excerpts from the score conducted by "Johnny" Williams, it sounds like a pretty fun evening.


Two days later, 20th Century-Fox held "one of the most spectacular [there's that word again] previews of all times," likely at the Academy of Motion Picture Arts and Sciences ("m.p.a." probably short for "Motion Picture Academy").


For those poor blokes in the United Kingdom that had to wait until December to feast their eyes on Star Wars in their local cinemas, some had a chance to attend sneak previews that summer and fall at the Dominion Theatre in London.


THE EMPIRE STRIKES BACK

Preview screenings for The Empire Strikes Back were taking place several weeks before its official world premiere at the Kennedy Center in Washington, D.C. on May 17th, 1980.


Empire also had several charity benefit premieres on May 19th and 20th before its May 21st general release. One of which was a benefit screening on May 20th for the Crossroads School in Los Angeles at the former Avco Center Cinema on Wilshire Blvd. The Darth Vader graphic used for this fantastic die-cut invitation was also used on a promotional portfolio sent exclusively to theater owners.


RETURN OF THE JEDI

Benefit preview screenings were held for Return of the Jedi as well. The following invitation is from a screening in Overland Park, Kansas the evening before the film's wide release on May 25th, 1983.


Though this particular example for a June 3rd private screening at the Academy is technically not an advanced screening, it's printed on a basic ticket template that was used for the film's press screenings. 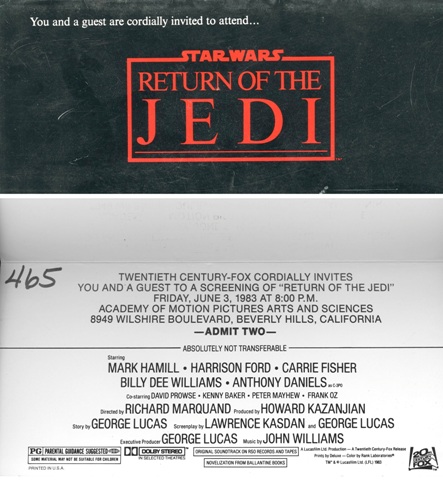 From here, the reviews start pouring in and the box office prepares itself for an onslaught of galactic proportions...
Posted by Stephen Danley at 8:00 AM